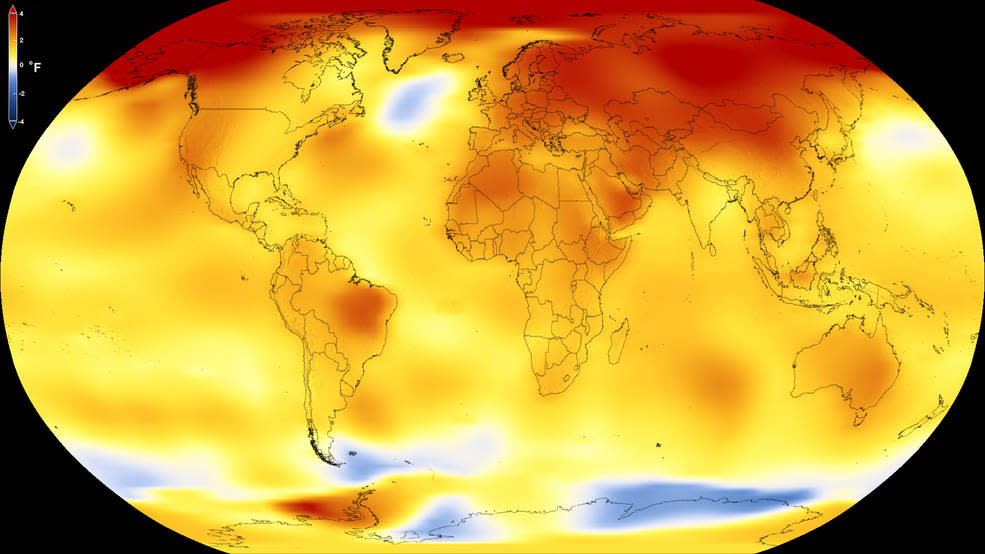 After careful analysis, NASA has declared that 2017 was the second-warmest year since the end of the 19th century. In a separate study using different analytical methods, National Oceanic and Atmospheric Administration (NOAA) ranked last year as the third-warmest in their records. But both agree that the globe has experience its five hottest years since 2010.

"Despite colder than average temperatures in any one part of the world, temperatures over the planet as a whole continue the rapid warming trend we've seen over the last 40 years," NASA's Goddard Institute for Space Studies (GISS) director Gavin Schmidt said in a statement.

As we noted last year, 2016 was -- and remains -- the hottest year on record. But the first third of it experienced an El Niño effect flowing in from 2015, which messed with weather patterns and caused global average temperature to fluctuate. But if you removed those effects (a La Niña pattern emerged late last year), 2017 would have been the warmest we've ever seen.

Earth's average surface temperature has risen by around 2 degrees Fahrenheit over the last century, NASA said, though weather dynamics mean not all regions around the globe were equally warmed. The increased amount of carbon dioxide and other human-made emissions released into the atmosphere are mostly to blame, and the effects have been obvious. Arctic regions have been warmed the most, which has caused a loss of sea ice.

NASA uploaded its 2017 data set here, if you're curious. The agency tracks global temps using a network of 6,300 weather stations, nautical observations from ships and buoys, and measurements from Antarctic research facilities. The institution compares current deviations from a baseline of temps recorded from 1951 to 1980. NOAA uses a different analytical method and temperature record, and its 2017 reports can be found here.

In this article: ClimateChange, GlobalWarming, green, nasa, noaa, space
All products recommended by Engadget are selected by our editorial team, independent of our parent company. Some of our stories include affiliate links. If you buy something through one of these links, we may earn an affiliate commission.