Amazon’s convenience store of the future makes me nervous

What do we lose when we hand over control to Amazon?

Half a decade in the making, and after a year of intensive testing, Amazon's cashier-free convenience store is opening to the public. Amazon Go, located at the base of the company's Seattle HQ, is the first of its kind: a convenience store with no checkouts, no lines and no stress. Simply walk in, select your purchases and walk out -- a seamless, frictionless, fast way to grab a sandwich for lunch. At least that's the story Amazon wants you to know.

If it works -- and we'll learn for sure in the next couple of months -- it will utterly revolutionize the way we buy groceries. Scan your phone on the entry turnstile and the store's army of cameras will begin tracking your every move. Facial, body and object-recognition algorithms will enable the system to spot your purchase as you take it from the shelf and put it in your basket.

When you're done buying a mix of freshly made convenience foods and ingredients for your evening meal (including booze), you just gotta leave through the door. That's it. The system has your credit card details on file, and you'll instantly be billed for what you take as soon as you walk out. Except for the odd random spot check by a flesh-and-blood employee to ensure the system hasn't gone haywire and to verify alcohol purchases, you will have no human interaction.

As someone who hates both waiting in line and the unpleasant experience of convenience shopping, Go is a dream come true. If such a store were built into my main station in London, I'd be able to turn up for my journey a little closer to the departure time, knowing I could grab a pasta salad and bag of chips without waiting in line. (Automated checkout machines in supermarkets and convenience stores have mitigated this problem somewhat.)

Amazon has created a technical marvel here, assuming again that it all works outside of Amazon's own tests, which included a shopful of customers all dressed as Pikachu. A system capable of identifying that many users at once, and their purchases, all in real time, is a gargantuan achievement. It's likely that ironing out the kinks in this system was what caused the long delay between the store's planned launch and its opening today.

There's also the fact that Amazon, a company that never met a piece of data it didn't like, is going to learn so much from this project. Supermarkets already goose their customers looking for the best way to sell to them, from shelf placement and muzak choice through to loyalty card purchase tracking. Don't forget that Target was able to work out that a teenage girl was pregnant before she had told anyone, thanks to the power of its data.

Amazon is getting a piece of that action, and you can bet its cameras will be gaining insights from everything you do. From the way people stand as they browse through to how enthusiastically they reach their arm forward, it'll be logged and crunched. And all of this will be fed back into the system to ensure that customers get what they want, and that Amazon maintains their loyalty.

The company won't even need to retrofit its platforms into the network of Whole Foods stores it now owns, although it may do so in the future. The insights gleaned from even a handful of Go outlets will be a petri dish through which other experiments can be conducted. 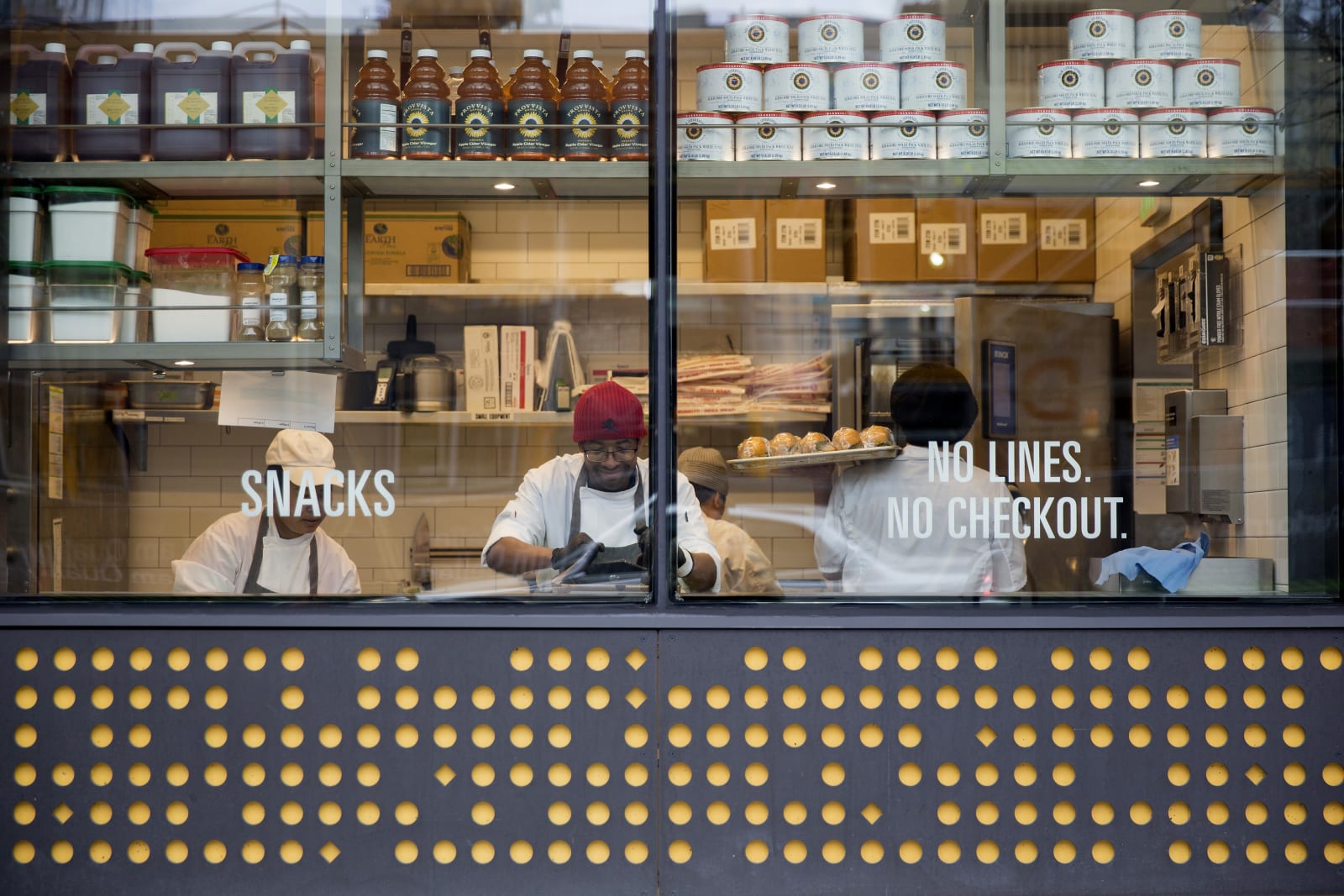 The existence of Go also serves to reinforce a couple of unpleasant truths about the world. A frictionless shopping experience is great, but it serves to throw up a couple of walls between Amazon and the most disadvantaged in society. For instance, 77 percent of Americans have smartphones, while there are plenty of people -- often African American or Latin American -- who are denied access to proper banking facilities. Since you need both to access a Go, the implication is clear: Jeff Bezos may love your money, but he's not going to accept your kind, so head on over to Dollar General.

The wider point here is that Amazon is attempting to completely dissolve the relationship between commerce and money -- and it troubles me. Amazon presumes your consent when you depart the store, laden with wares, and the company takes your cash automatically. But should we be placing so much blind faith in this particular retailer?

There are price labels on each shelf edge, sure, but how much time are you spending logging each purchase against the value charged? Not to mention that Amazon doesn't have an unimpeachable reputation when it comes to its pricing: In 2014, it changed the price of a product eight times in a single day. What are the chances that you walk out of a store thinking that you're staying within budget, only to find a nasty surprise weeks later on your credit card statement?

I won't deny that both are personal issues for me. I grew up in a single-parent family on welfare. For us, shopping was a prolonged chore where we had to make sure we had enough food to last a week on our slender £10 budget -- around $15 in 1994 money. That meant hunting for bargains and constantly chopping and changing what we'd selected from the shelves if we found a clearance item or something on the damaged-item shelf. A piece of folded paper, a pencil and plenty of time were our only weapons, along with our wits. Our local corner store, which admittedly wasn't actually on a corner, used to offer us nod-and-wink terms when things were tight, and we made sure to repay their generosity when we could. I very much doubt that Amazon Go will be able to do the same.

What happens when our relationship with money is entirely unshackled from how we buy things in the real world? Credit cards and contactless payment methods have already trained us to spend more freely than perhaps we should, but what about when there's no relationship there at all? Mindless shopping is a luxury that can be afforded only by the few; everyone else will just feel the pain when their statement lands in the inbox.