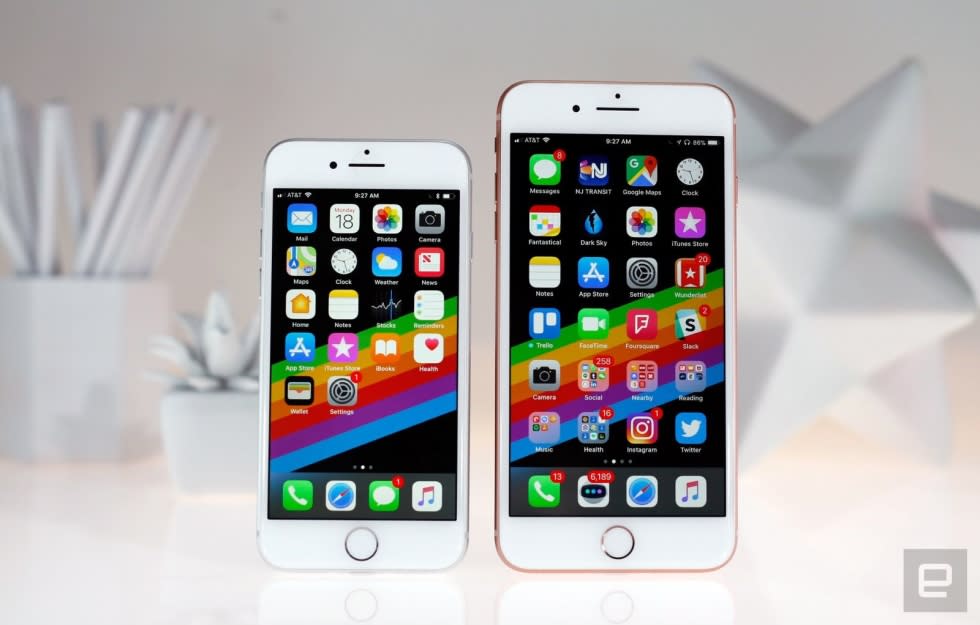 Smartphone sales were so slow during the holiday season of 2017, that Apple overtook Samsung to capture the first place in the market, according to IDC and Strategy Analytics. This, despite the fact that iPhone sales dropped during the holidays -- down 1.3 percent from the same period the year before -- and that the iPhone X hasn't been doing as well as Cupertino hoped for. Smartphone manufacturers apparently only shipped 403.5 million units during the holidays last year compared to 430.7 million units in 2016. Samsung, which usually sits at the top of the list, shipped 74.1 million phones in the last few months of 2017, down 4.4 percent from the year before.

IDC's findings aren't really surprising: in its fourth quarter report, Samsung revealed that its operating profit also fell during the period. Anthony Scarsella, mobile phone research manager at IDC, explained that people might have seen the Galaxy S8, the Note 8 and the iPhone X more "as a luxury than a necessity." He added that "even though we have seen new full-screen displays, advanced biometrics, and improved artificial intelligence, the new and higher price points could be outweighing the benefits of having the latest and greatest device in hand."

IDC said that by claiming the top spot from Samsung, Apple proved that "having numerous models at various price points bodes well for bringing smartphone owners to iOS." Despite Cupertino's victory, Samsung remains the top smartphone vendor overall for 2017. It shipped 317.3 million units, up 1.9 percent from 2016, and it believes the Galaxy S9 will successfully convince people (still unsure about forking out a considerable amount of money for a fancy bezel-less phone) to upgrade. Apple, which shipped 215.8 million units in 2017, has claimed the second spot, followed by Huawei (153.1 million), Oppo (111.8 million unit) and Xiaomi (92.4 million).

In this article: apple, gear, IDC, iphone8, iphone8plus, iphonex, mobile, Q42017, samsung, smartphone
All products recommended by Engadget are selected by our editorial team, independent of our parent company. Some of our stories include affiliate links. If you buy something through one of these links, we may earn an affiliate commission.