The next PlayStation 4 firmware update will make the PS4 Pro a lot more like the Xbox One X. No, I don't mean the patch will malevolently shrink the breadth of Sony's first-party games lineup next time the console is in sleep mode, either. Instead, software version 5.50 adds a supersampling mode to the PS4 Pro.

On the Xbox One X, that translates to higher frame-rates, improved visual clarity and more detailed graphics on select titles when the console is connected to a 1080p TV. Here's how Sony describes the situation on PS4 Pro: "Certain games already have the 'supersampling' benefits as part of their 'PS4 Pro Enhanced' feature set, but this new mode can enhance the experience for those games that don't already have the feature."

Just hop into the system settings menu to activate it and you should be good to go.

There are a handful of other new features that every PlayStation owner will benefit from as well. Once the software goes live for everyone, you'll finally be able to change your PS4 wallpaper to an image from a USB stick, and do the same to customize a tournament or Team page.

A few changes are coming to music playback too. Music controls for Spotify, the media player and USB music player apps are coming to the quick menu. More than that, some PS Now games will let you listen to your own tunes while streaming a classic title from Sony's servers.

There are a few other quality of life additions, like better organization for the game library and child play-time limits in the "Keiji" update, too. Xbox One added play limits last year with the Creators Update, and the One X hardware has been supersampling games since last November. Outside of a few games like Horizon: Zero Dawn, PS4 Pro owners without a 4K TV on the other hand, have been left in a lurch in terms of supersampling since the system was released in late 2016. Reset Era has a list of games that purportedly support supersampling.

It's a little strange seeing Sony follow Microsoft's lead considering how far behind the Xbox One is in sales, of course. But, maybe, that means we'll see a PS4 Pro with an Ultra HD Blu-ray drive in it announced this year. We can hope, right?

In this article: 4k, av, firmware, gaming, playstation, playstation4, ps4, ps4pro, ps4proenhanced, sony, supersampling, update, xboxone, xboxonex
All products recommended by Engadget are selected by our editorial team, independent of our parent company. Some of our stories include affiliate links. If you buy something through one of these links, we may earn an affiliate commission. 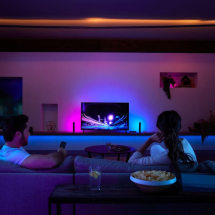