The company's classy take on the MacBook has a weird home for your webcam.

When Huawei unveiled its first true laptop barely a year ago, it was a slightly more useful MacBook lookalike. While the MateBook X looked a lot like Apple's device, it offered some minor changes that alleviated common grievances, including the MacBook's solo USB-C port and its barely-there key travel. At MWC this year, Huawei is unveiling the next generation of the series, called the MateBook X Pro. It's a larger, more powerful notebook with a better display and impressive audio tech, but one quirky new feature could prevent it from being a good option for professionals.

Huawei moved the webcam from above the screen and hid it in the keyboard, primarily to tackle privacy concerns. Instead of integrating shutters like Lenovo and HP have done, Huawei's solution to the sticky-note-over-the-camera situation is to embed it inside a key.

Push down the spring-loaded middle button of the top function row, and up pops a 1-megapixel webcam with a light next to it indicating it's on. Press it down when you're done, and it not only deactivates and gets out of the way but even if it is hacked to spy on you, it will see only the darkness inside your laptop.

Kudos for creativity, Huawei -- this is unique. But as we've already seen with Dell's XPS line of laptops, webcams placed below the display make for seriously unflattering, unclear angles in photos and during conference calls. Unlike the XPS laptops, you can't move the screen to try and find a less-awkward angle, either. When I tried out the MateBook X Pro's camera, I was annoyed by how difficult it was to avoid having an on-screen double-chin -- I wouldn't be happy using this device to make any video calls.

The one other benefit of moving the webcam down to the keyboard is the MateBook X Pro's noticeably skinnier bezels compared with the original. It doesn't seem like a good enough tradeoff, though.

Still, the Pro is a gorgeous piece of hardware. Sure, it looks very much like a MacBook, but I'm not complaining -- nice is nice. The new MateBook feels just as sturdy and premium as its predecessor, once again combining a lightweight build with a sleek profile. 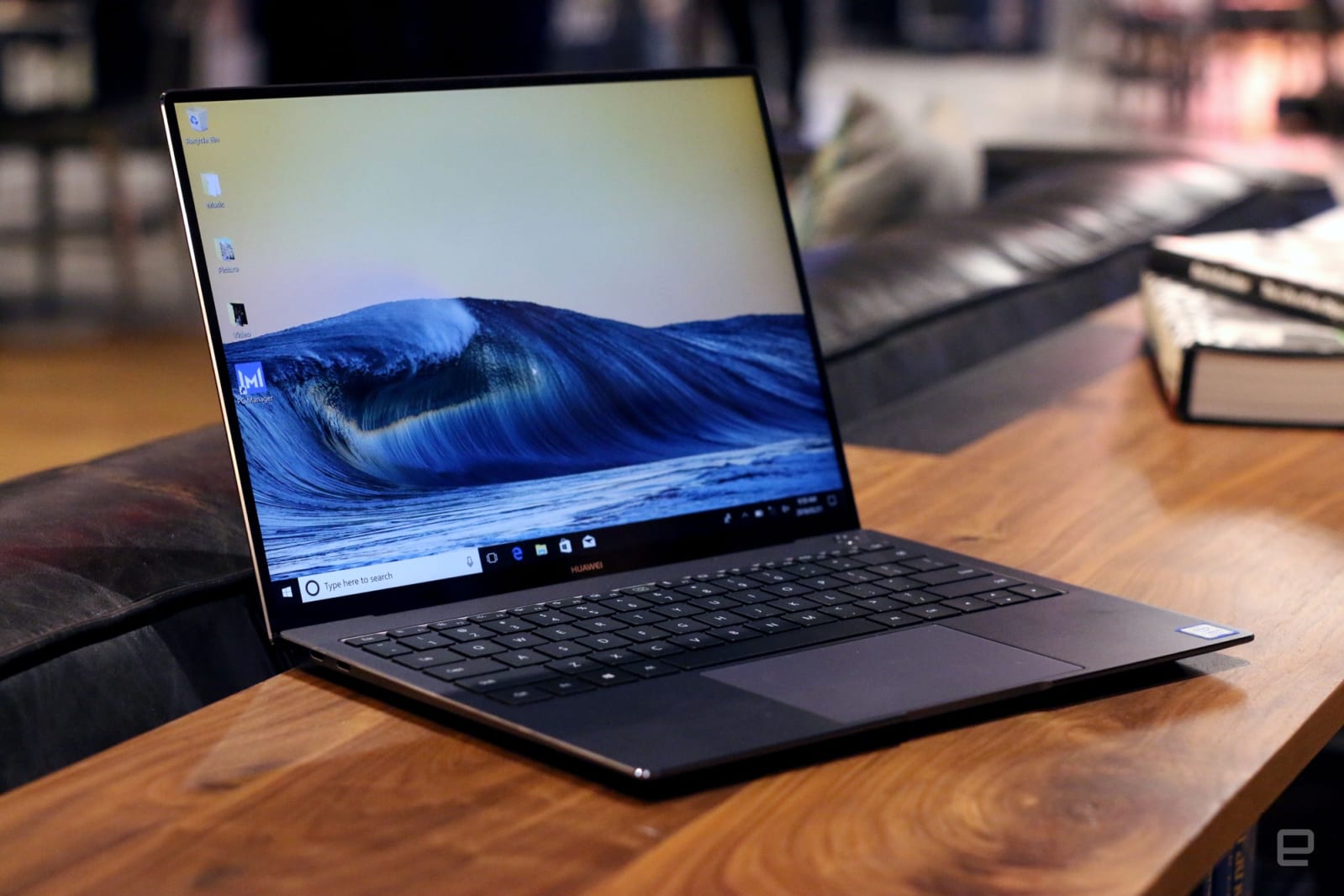 If you can look past the awkward camera placement, or if you don't intend to use your laptop's webcam much, there are a few more things to like about the MateBook X Pro. In addition to getting bumped up to the latest eighth-generation Intel Core i5 (or i7) CPUs, the notebook can also be configured with a discrete NVIDIA MX150 graphics chip. This makes it the thinnest laptop of its size to sport discrete graphics, according to Huawei.

The MateBook X Pro has a larger screen than the original -- 14 inches -- which packs a 13-inch display. It also goes up to 450 nits in brightness over the smaller laptop's 350 nits. Since I only saw the Pro in a meeting room, I couldn't tell if the increased luminance would make it easier to see in direct sunlight, but it was certainly clear during our demo. The new model's screen is now touch-friendly, and got a slight resolution bump to 3,000 x 2,000, maintaining a similar pixel density to the smaller version.

To complement the display during your movies or games, the MateBook X Pro comes with Dolby Atmos 2.0 for crisper and more immersive surround sound. During our demo, Dolby's sample of nature sounds rang out loud and clear from the laptop's quad speakers, even when I was facing the back of the device. Huawei also moved the speaker grills from above the keyboard to either side of the keys. The Pro also packs a quad-mic array, two more than before, which should allow for clearer voice quality. A much larger touchpad now sits below the keyboard, making mouse navigation more convenient, too. 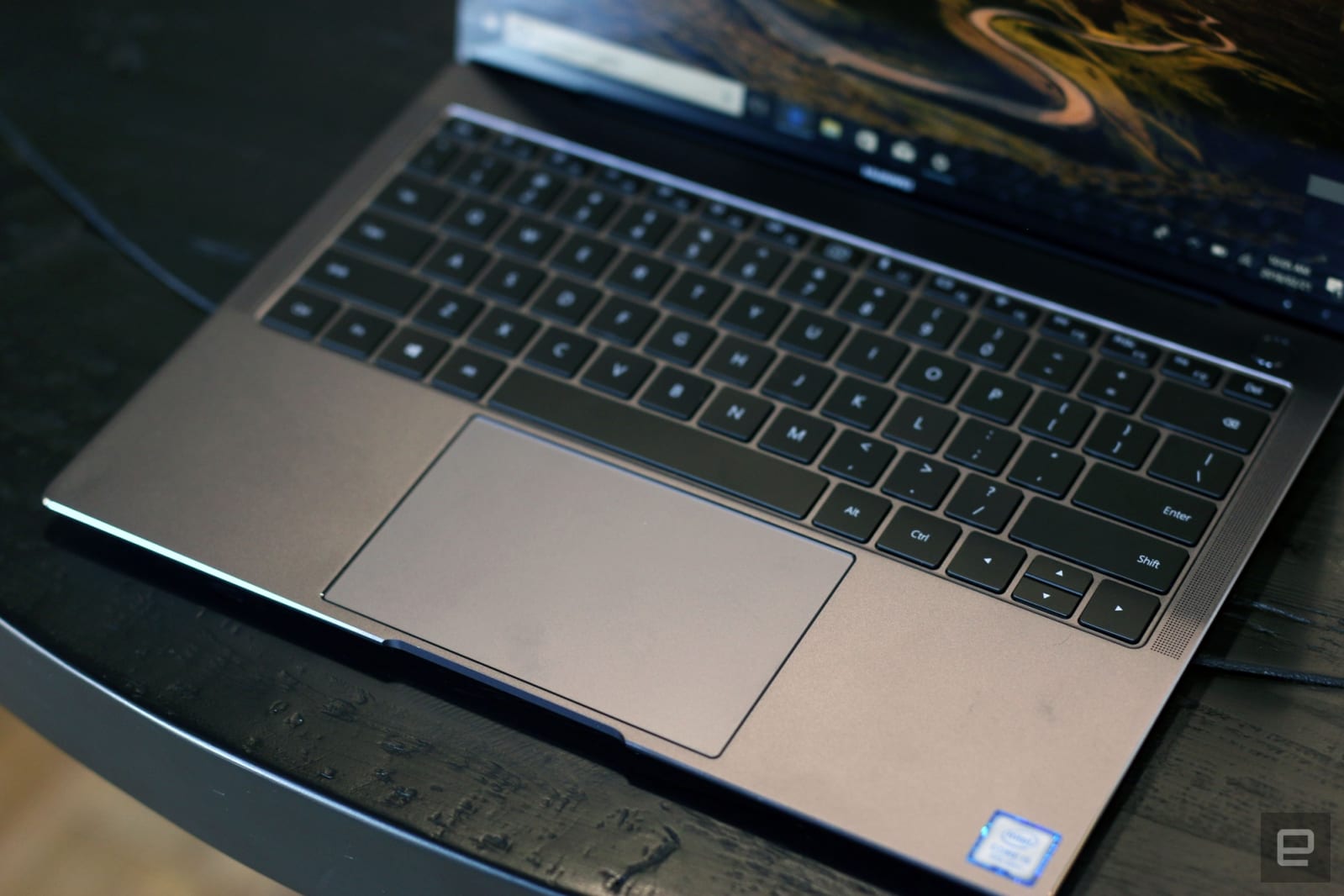 The company has apparently managed to squeeze more battery life out of the Pro, and it can clock about 12 hours on a charge -- two hours longer than the regular model (looping 1080p video). While the smaller MateBook X had two USB-C ports (one more than the MacBook), the new laptop adds a USB Type A socket to the mix, at USB 3.0 speeds. The two USB-C slots will not only support power and data transfer, but one of them is also compatible with Thunderbolt 3.

Questionable webcam placement aside, the MateBook X Pro appears to be an attractive, powerful 14-inch laptop. If the camera is not a dealbreaker, you might want to consider this PC as your next workhorse. Unfortunately, we still don't know how much it will cost and when it will be available, but we do know that it will come in two colors (silver and dark gray). Because the original MateBook X started at $1,099, you can expect the Pro model to cost slightly more than that at launch. That's not a small investment, so you might want to wait until we get a review unit in for more testing before splurging on it.

Update: At its press conference in Barcelona, Huawei shared some European pricing information, which should be a good reference for when the device arrives stateside. The base configuration, which packs the MX150 discrete graphics, a Core i5 CPU and 256GB of storage, will cost €1,499.

All products recommended by Engadget are selected by our editorial team, independent of our parent company. Some of our stories include affiliate links. If you buy something through one of these links, we may earn an affiliate commission. All prices are correct at the time of publishing.
Huawei's MateBook X Pro crams a pop-up webcam into the keyboard
gadgetry
gadgets
gear
huawei
HuaweiMateBookX
huaweimatebookxpro
MateBook
mwc2018
personal computing
personalcomputing