Mobile World Congress, for obvious reasons, isn't really known for its laptop announcements. Lenovo is bucking that trend today, however, with three mid-range convertibles sporting the Yoga name. The most exciting is the Yoga 730, a sleek 2-in-1 that sits below the company's flagship Thinkpad X1 line and the popular Yoga 920. It will be available in 13- and 15-inch variations, sporting similar designs but slightly different upgrade options. They'll be joined by the Flex 14 (which will be marketed as the Yoga 530 outside of North America) a cheaper alternative with a near-identical form factor.

First, the Yoga 730. We're yet to be told the base specs, but we know they'll go up to an eighth-generation Intel Core i7 processor and 16GB of RAM. The smaller version will offer up to 512GB of SSD storage while its larger sibling ramps up to a beefy 1TB. On the 13-inch laptop, you'll be stuck with integrated graphics (boo) but the 15-inch model can be specced up to a gaming-friendly Nvidia GTX 1050. Both come with built-in JBL speakers and the option of a 1080p or 4K touchscreen — perfect for mindless finger doodles and artsy brushstrokes with Lenovo's optional Active Pen 2 stylus.

It's a Yoga, so of course you can flip the screen over and use it like a tablet. I still think it's weird to hold a laptop with the keyboard pressed into your palm, but hey, the option is there if you really dig the 'clipboard' form factor. Both are relatively light — the 13-inch model weighs two and a half pounds, while the 15-inch version comes in at 1.89kg. The display bezels are also fairly slim and I like that the webcam is placed up top, rather than the lower left-hand corner (where you're stuck with an up-the-nose shot). 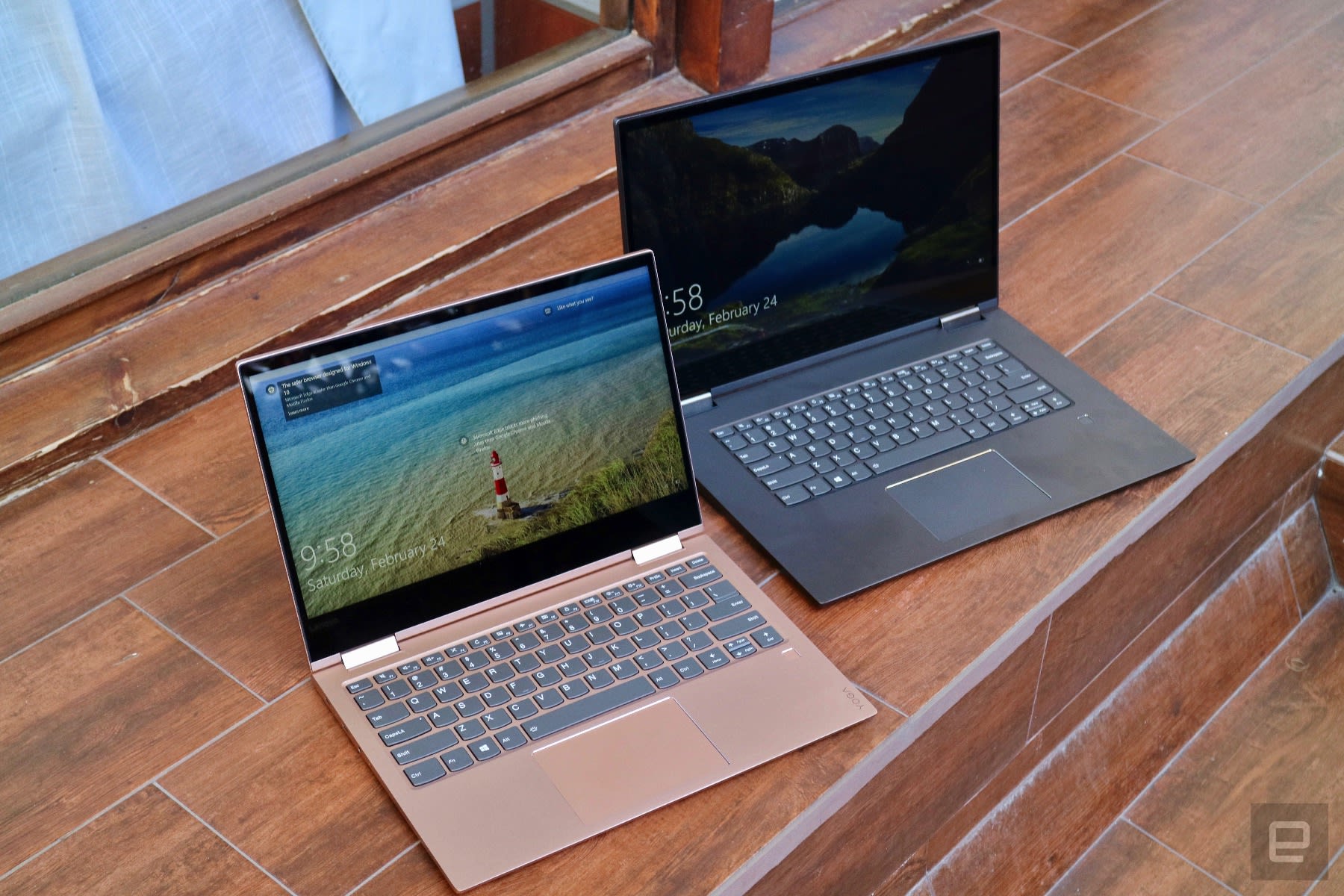 Like the Thinkpad X1 range, the Yoga 730 will support both Cortana and Amazon's Alexa assistant. AI-hopping isn't ideal, but until the smart speaker wars shake out it makes sense for Lenovo to offer multiple options (the company is also backing the Google Assistant with its Smart Display.) Both the 13-inch and 15-inch models will come with far-field microphones that can pick up your voice from across the room. So in theory, you could ask Cortana for your schedule and then book a time-appropriate Uber through Alexa. Or search for an article and order a pizza while you read.

The 13-inch and 15-inch Yoga 730 will start at $880 and $900 respectively. They cost considerably more than the $600 Flex 14, which will ship with an Intel Core i3 processor and a 1080p touchscreen. You can upgrade to an eighth-generation Intel Core i7 processor, a 512GB SSD, 16GB of DDR RAM and an Nvidia GeForce MX130 graphics card, but these will cost you extra. At first blush, Lenovo's new laptops seem like decent if predictable performers for people with a sub-$1,000 budget. They all look the part and the Alexa support is nice for people who own a bunch of Echo speakers and compatible smart home appliances. Part of me misses the watchband-inspired hinge found on the Yoga 920, but hey — you can't have it all.