SteelSeries' Arctis Pro is a high-res headset for discerning gamers

And there's a new wireless entry, as well.

High-fidelity audio is typically meant for the most extreme music geeks -- people who have expensive DACs (digital-to-analog converters), huge speakers and crazy headphones. You've probably seen (and rolled your eyes at) those folks extolling the virtues of 24-bit audio on message boards and comment sections around the web. With its latest gaming headphones, the Arctis Pro line, SteelSeries is hoping to aiming to make that high-end audio experience something everyone can enjoy.

If you've seen SteelSeries' previous Arctis gaming lineup, the new headphones will look pretty familiar. They share the same basic design: clean lines, comfortable fabric-covered cups, and a sturdy steel headband that's joined together with a soft strap that adjusts the fit to your head. The headsets also feature new driver designs capable of producing sound up to 40kHz (a questionable upgrade, since human hearing typically tops out at 20kHz). Just like before, they also have retractable microphones with noise-cancellation on the left can.

The star of the show is the wired Arctis Pro PC and PlayStation 4 headset ($250), which plugs into the "GameDAC" breakout box. That's powered by an ESS Sabre 9018 chip, a DAC you'd typically find in music enthusiast gear, with support for 96kHz/24-bit audio. (CDs, in comparison, deliver 44.1kHz/16-bit quality.) Basically, it means the GameDAC can produce higher quality sound than what you'd find on most PCs. It's perfectly geared towards things like Tidal's Hi-Fi and Masters features, which lets you stream lossless and high-resolution 24-bit music files for $20 a month. Niche sites like HDTracks have also been trying to push high-res music for years, but the cost and complexity of hearing those files makes it hard to compete against streaming services. 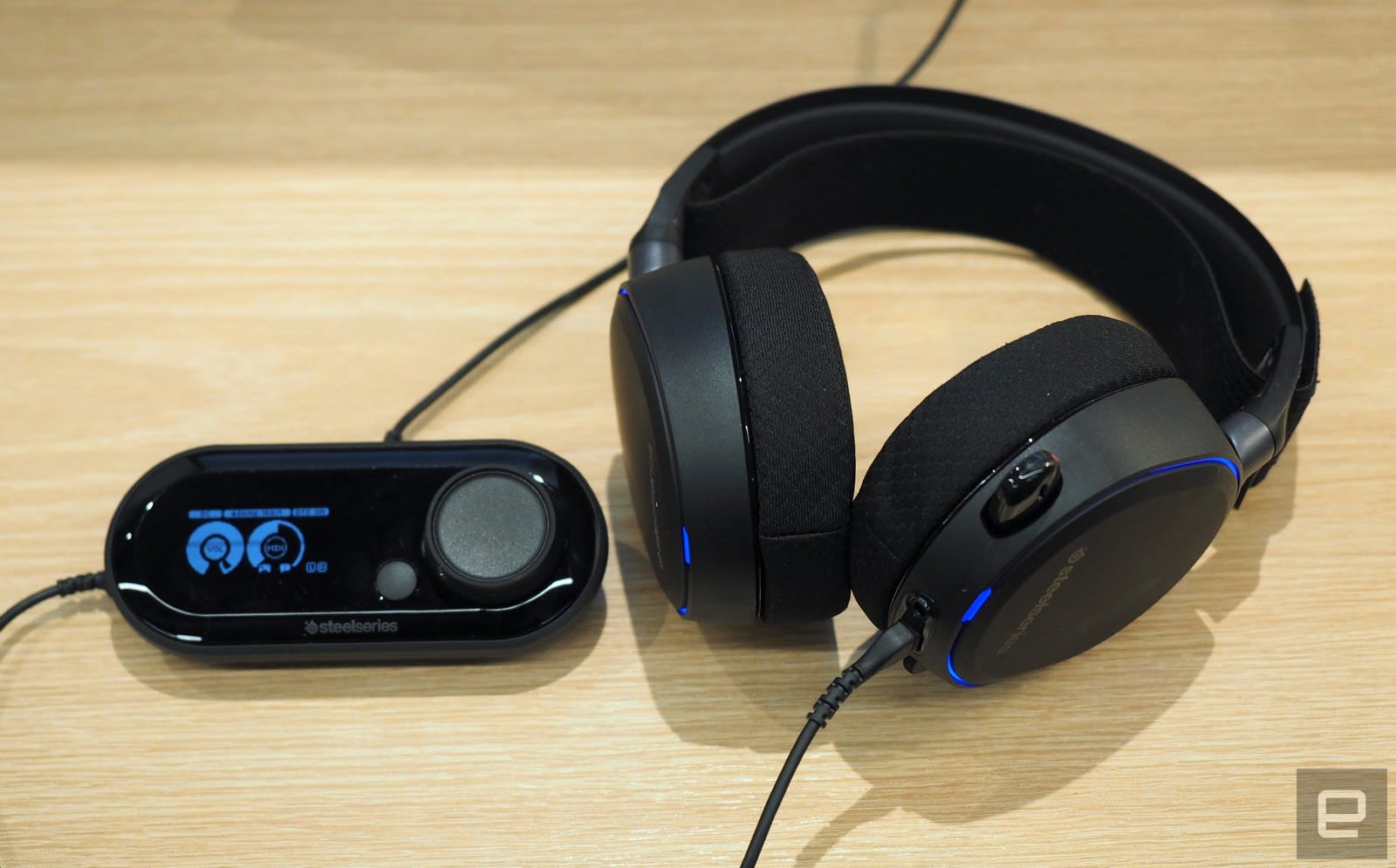 The GameDAC features a simple monochrome OLED screen, a large volume and control dial, and a button up front for enabling and disabling DTS Headphone:X 2 virtual surround sound. Around the back, there's an optical connection for the PS4, a USB port to plug into your computer, a line-out connection to power nearby speakers, and an auxiliary jack for your phone. The Arctis Pro connects to the USB port on the left side of the GameDAC. The box has an understated oval design, and SteelSeries wildly angled the screen up a bit to make it easier to see.

Not surprisingly, the GameDAC is your main way to control the Arctis Pro. From the home screen, you can control the volume levels of your audio and chat mixes. You can also jump between different input modes: standard PC gaming (which is limited to 48kHz/16-bit audio, like most devices); high-res music listening; and PlayStation 4 games. Additionally, you can tweak equalizer and RGB light settings from the GameDAC. If you need to customize things even more, you can also use SteelSeries' PC software.

If you're strictly anti-cable, though, there's also the $330 Arctis Pro Wireless for PCs and the PS4. It also comes with a breakout box, just like the company's Siberia 800 headset, but it doesn't offer the same high-fidelity audio as the wired Arctis Pro. Instead, it features lossless, low-latency sound over the 2.4Ghz spectrum. That's better than just relying on Bluetooth, which compresses sound and loses detail in the process. Don't count out that wireless tech entirely, though -- the Arctis Pro Wireless also supports a simultaneous Bluetooth connection along with its lossless receiver, allowing you to pipe in your Discord chat food, or music from your phone. It comes with two battery packs which each hold 10 hours of juice -- one sits in the headphones, while the other charges in the wireless receiver. Swapping them takes only a few seconds. 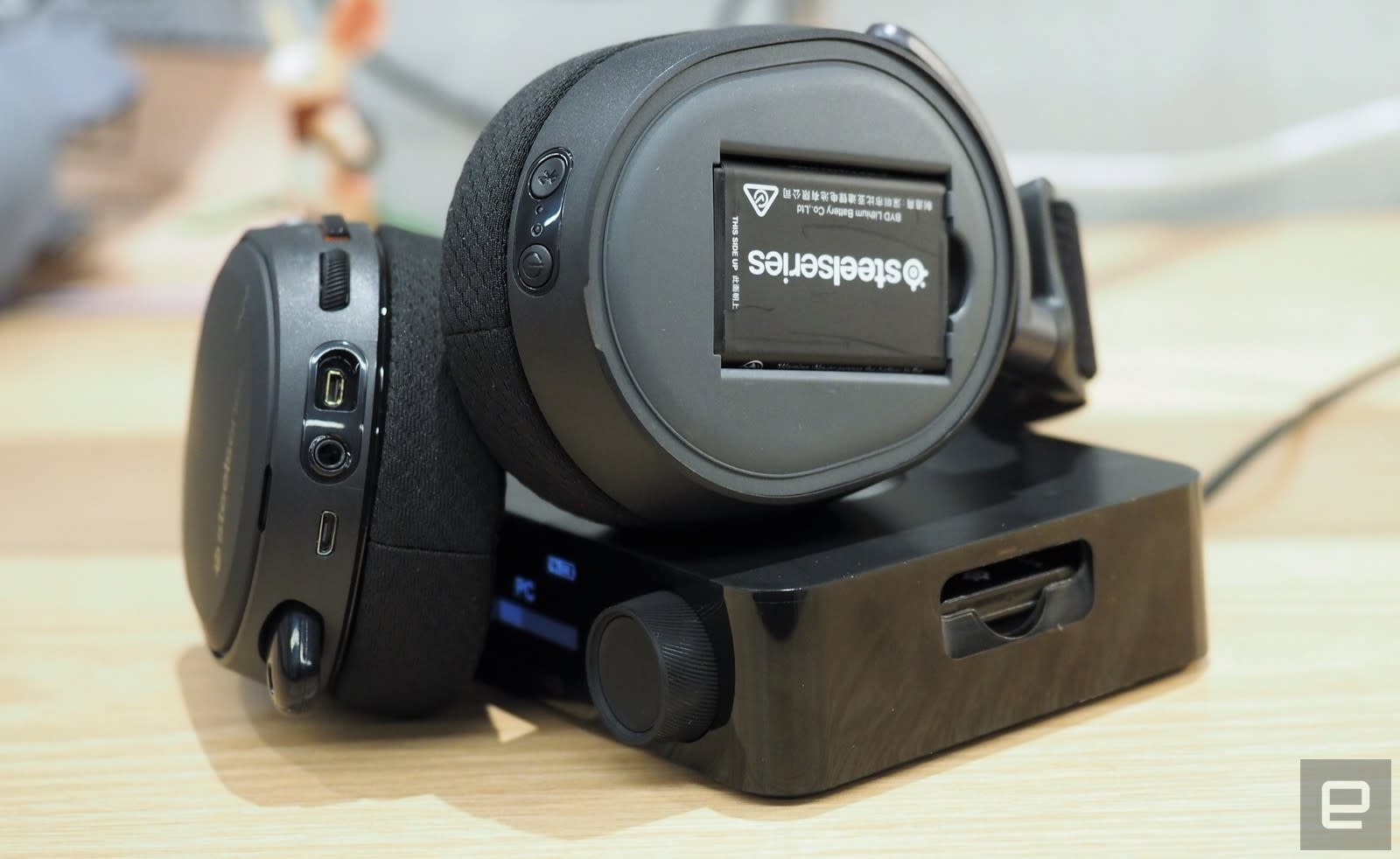 After a week of testing, I found a lot to love from both headsets. They're light and comfortable to wear for hours on end. And, most importantly, they both sound excellent. They were perfect for the dynamic audio design in Nier: Automota and Overwatch -- explosions and firing weapons all left an impact, and I couldn't hear any distortion once the action heated up. Other players had no trouble hearing me through the microphone, even while a loud TV was playing in the same room. On the PlayStation 4, the Arctis Pro Wireless sounded significantly better than plugging headphones into the Dual Shock controller. Both headsets also excelled at making music feel alive and vibrant, from Janelle Monae to high-resolution classical music on Tidal. You could hear plenty of detail and nuance across different genres, something that other bass-heavy gaming headsets often have trouble with.

But. I honestly didn't hear a huge difference between the Arctis Pro in Hi-Res mode and the lower quality wireless version. And yes, just to confirm, I was listening to 24-bit music from HDTracks and Tidal Hi-Fi. If I concentrated in a perfectly quiet environment, I could make out a tad more clarity from the wired headset, but it wasn't anything revelatory. I'm not too surprised, though. I've been dabbling in the world of high-resolution audio for years, and while I've heard some great recordings (Michael Jackson's Thriller sounds amazing in 96kHz/24-bit), I still prefer the flexibility of streaming music and my compressed (but still very high quality) library. 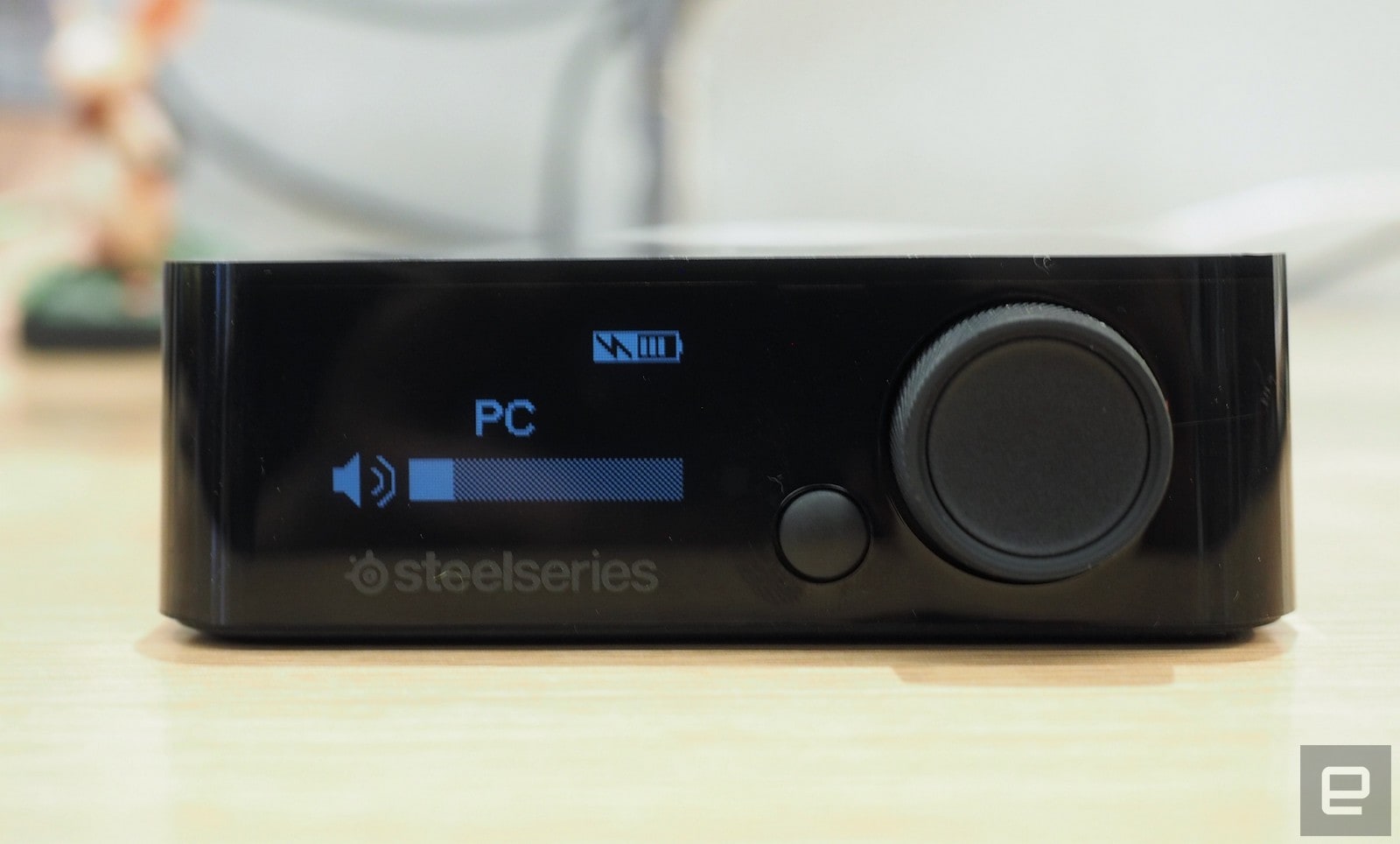 While I'm still not entirely sold on high-resolution audio, SteelSeries deserves credit for delivering another set of tremendous gaming headphones. No matter if you go for the wired or wireless options, you'll have a fantastic audio experience. And if they're too pricey for you, the company's existing lineup remain great options, starting with the $80 Arctis 3.

All products recommended by Engadget are selected by our editorial team, independent of our parent company. Some of our stories include affiliate links. If you buy something through one of these links, we may earn an affiliate commission. All prices are correct at the time of publishing.
View All Comments
SteelSeries' Arctis Pro is a high-res headset for discerning gamers
ArctisPro
av
gadgetry
gadgets
gaming
gamingheadphones
gear
SteelSeries