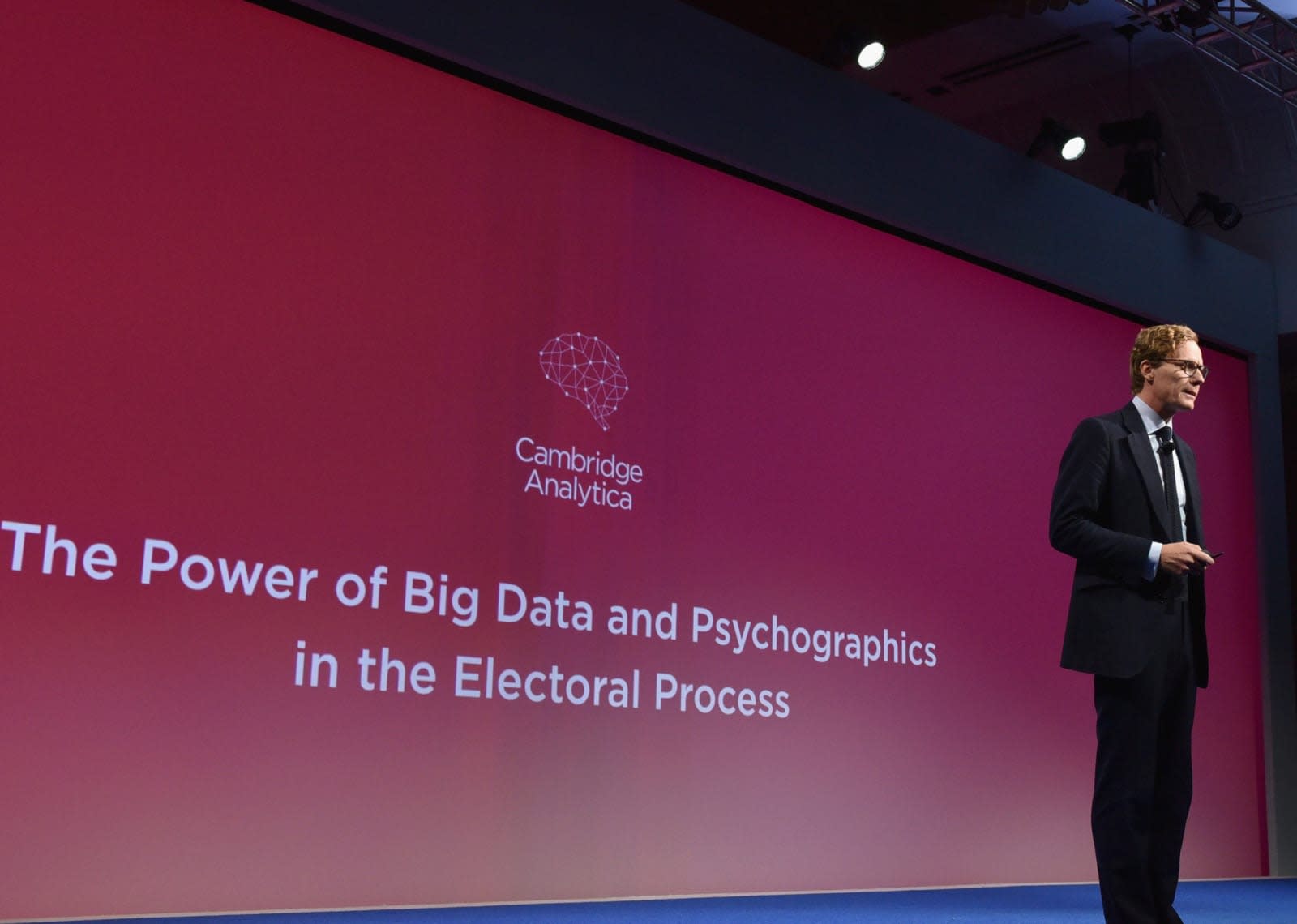 Late Friday night, Facebook has announced it's suspending Strategic Communication Laboratories (SCL) from its site. While you may not have heard of SCL, its political analytics firm Cambridge Analytica has made headlines in the last few years due to work for the Trump campaign and the Brexit initiative. According to former US Magistrate and current Facebook Deputy General Counsel Paul Grewal, this move is occurring because an app "thisisyourdigitallife" pulled in personal information of the 270,000 people who used it as well as information from their friends. While this is allowed under its policy, its creator -- a Cambridge psych professor named Dr. Aleksandr Kogan -- passed the data onto other parties including Cambridge Analytica.

Facebook's stance is that it requested the deletion of the data in 2015, which Cambridge Analytica, Kogan and another man, Christopher Wylie, said they did. The social network disagrees, and said it has been informed that not all of the data was deleted. Now it's suspending their access while it investigates.

So who are these people and what did they do with that data? Last May The Guardian reported extensively on Cambridge Analytica, citing a source who said Wylie is "the one who brought data and micro-targeting [individualised political messages] to Cambridge Analytica." That same article specifically pointed out Kogan's app and its link to the company, which combined psychological profiles with specific names, phone numbers and email address plus information it bought from consumer databases. One of the claims it makes is that as much as promoting one candidate, its objective was voter disengagement and to keep potential Democratic voters home.

Facebook's VP of consumer hardware and former VP of ads, Andrew Bosworth, tweeted "We have suspended Cambridge Analytica from our platform for a clear violation our policies. They cannot buy ads or administer its clients' pages." Facebook also noted that in 2014, it changed its policies around how apps can pull information from someone's friends, and now puts apps through a review process to find out if they need all the information they're requesting. But as a report by The Intercept detailing how Kogan's program worked by signing up Amazon Mechanical Turkers notes, the information had already been obtained.

As Facebook continues to investigate, there will surely be more scrutiny from all sides over how internet companies are protecting their user's information. Oh, and there's one more thing you should know -- this announcement comes the same day that a lawsuit filed by a US professor against Cambridge Analytica has been filed. Mother Jones reports that David Carroll requested a copy of the data the company has compiled on him and says that what he received is incomplete.

Update: Cambridge Analytica has responded to the suspension. It claimed it "fully complies" with Facebook's terms of service and that its commercial and political wings don't use or hold on to data from Facebook. CA said it had contracted Global Science Research to collect data within the UK Data Protection Act and with consent, but deleted that data when it realized that GSR had collected info against Facebook policies. None of that info was used in the Trump campaign, it said.

We have suspended Cambridge Analytica from our platform for a clear violation our policies. They cannot buy ads or administer its clients' pages. https://t.co/YIJ8MF4XI6

We are committed to vigorously enforcing our policies to protect people's information. We will take whatever steps are required to see that this happens.

Now that we've filed with the court and served the Defendants, pledge your support at https://t.co/ug9L7TCARG so we can #TakeBackOurVoterData because I need your help to do this.

In this article: aleksandrkogan, alexandernix, bigdata, brexit, cambridgeanalytica, christopherwylie, donaldtrump, facebook, fridaynightnewsdump, internet, paulgrewal, politics, SCL, suspension, tos
All products recommended by Engadget are selected by our editorial team, independent of our parent company. Some of our stories include affiliate links. If you buy something through one of these links, we may earn an affiliate commission.