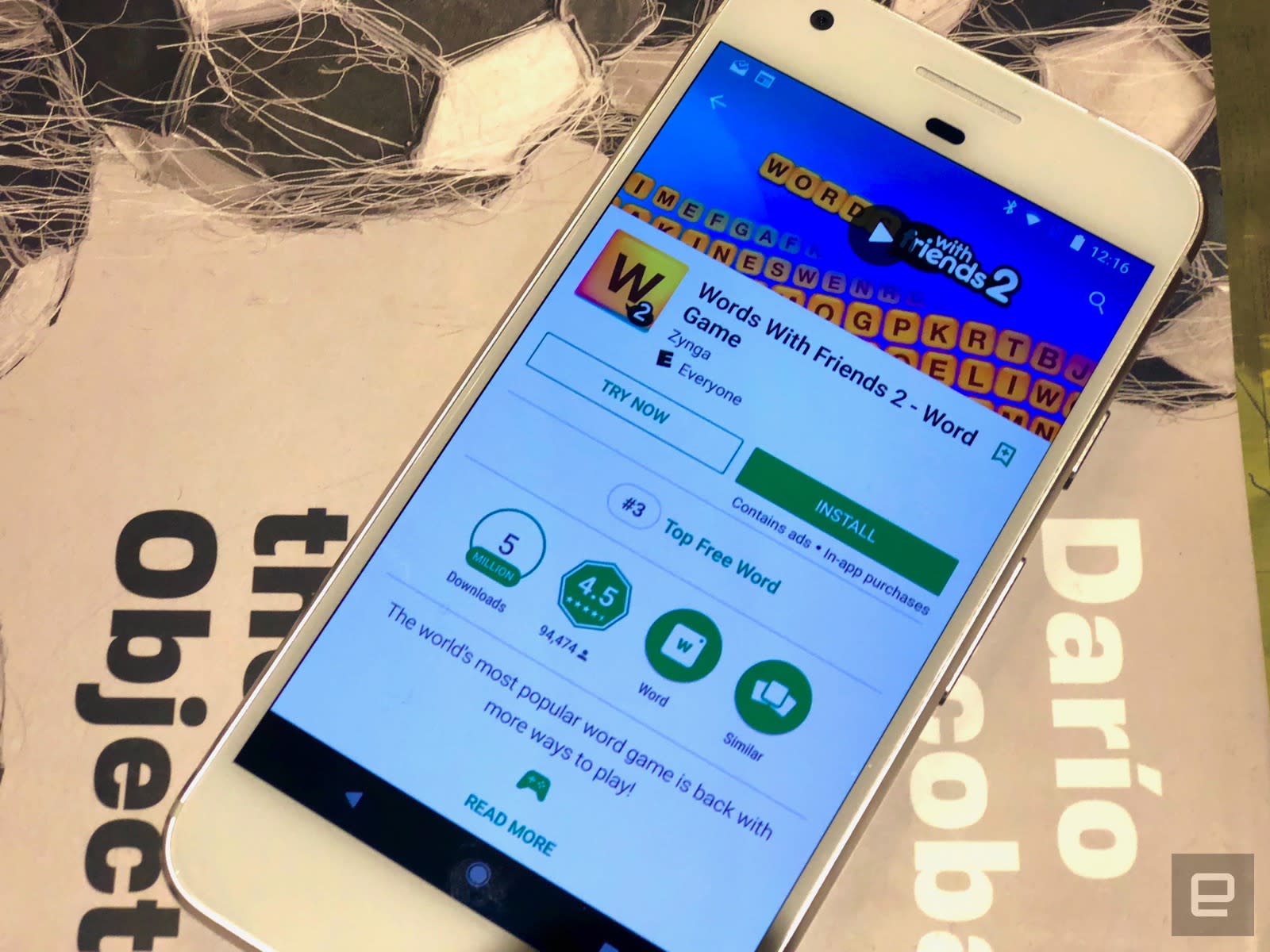 Google doesn't really make games on its own, but with Android, it supports one of the biggest developer communities out there. As such, the company is sharing some news at the Game Developers Conference that'll be of interest to both players and devs alike: The "Instant App" technology that Google added to Android last year can now be used on games, as well.

Android users can already try a small selection of games in the Google Play Store that load up their full experience without needing to go through the normal install process. Titles include the ever-popular Clash Royale, Words With Friends 2, Bubble Witch 3 Saga, Final Fantasy XV: A New Empire, Mighty Battles and -- of course -- Solitaire. We got to try a few games ahead of time, and while you do need to wait a few seconds here and there, getting into the full experience of the game happens quickly and without any major delay, at least on the WiFi connection we were on.

Jonathan Karmel, a product manager for Google Play, explained that the idea for making games work with Instant App technology came from a desire to reduce friction and get users straight into the game, so to speak. That's particularly true for social games like Clash Royale, where a player can send a friend a link to "join their clan" -- which then results in jumping through a series of hoops to actually get the app up and running. With Instant Games, when you click over to a game's profile in the Google Play Store, there's a "try now" button that puts you right in the game's full, native experience quickly. While you can only play a portion of the game like this, you'll come across plenty of prompts to download the full app if you're so inclined.

Although it's safe to say that installing an app isn't a big barrier for most mobile users at this point, there's definitely something to be said for letting players experience a game before giving up valuable storage space to a full install. And in early testing, it's been successful. "Users who have historically abandoned -- instead of installing -- a game are instead trying the game out and then installing," Karmel said.

For starters, instant games (or what the company is calling "Google Play Instant") is in a closed beta, which means only selected developers can use the technology. There are only eight partners in the beta right now, though Google plans to allow more and more developers to use the technology over time. And while it took a full year for Instant Apps to go from announcement to available for all developers, Google anticipates that instant games will roll out much faster -- Karmel said that general availability would come in a few months. Perhaps not coincidentally, Google's annual I/O developer conference is also just a couple months away.

In addition to the Google Play Instant announcement, Google is also launching a redesigned Play Games app for Android today. The app originally was Android's answer to the iOS Game Center, with a focus on achievements, matchmaking and playing games with friends, but now it's been redesigned with a bigger focus on curated content and discovery features.

It's a direction that the Play Games app has been moving in for a while now, but a stylish new "arcade" area that features more animation and video previews as well as a variety of different categories for players to explore. The app still serves as a home to jump into all your games, but Google's Benjamin Frenkel says that Play Games is more meant to "focus on curated content and have a stronger editorial voice." In some ways, it sounds like what Apple did with its App Store redesign last fall; games got their own dedicated tab with more in-depth content and curated categories to help people sift through the insane number of options out there. Naturally, the Arcade section of the app will host instant games so users can jump right into a game.

As we noted, there are only a handful of instant games available at launch -- but both the new Play Games app and a selection of instant games are available now for Android users to try. We'll be keeping an eye on the app to see how quickly Google can get more instant games out in the wild. For starters, they're only in the Play Store, but Google says the format can be used all over the web, so you might see links to play games in a lot more places soon.

In this article: gaming, gdc2018, google, googleplay, googleplaygames, googleplayinstant, instantapps, mobile, playgames
All products recommended by Engadget are selected by our editorial team, independent of our parent company. Some of our stories include affiliate links. If you buy something through one of these links, we may earn an affiliate commission.