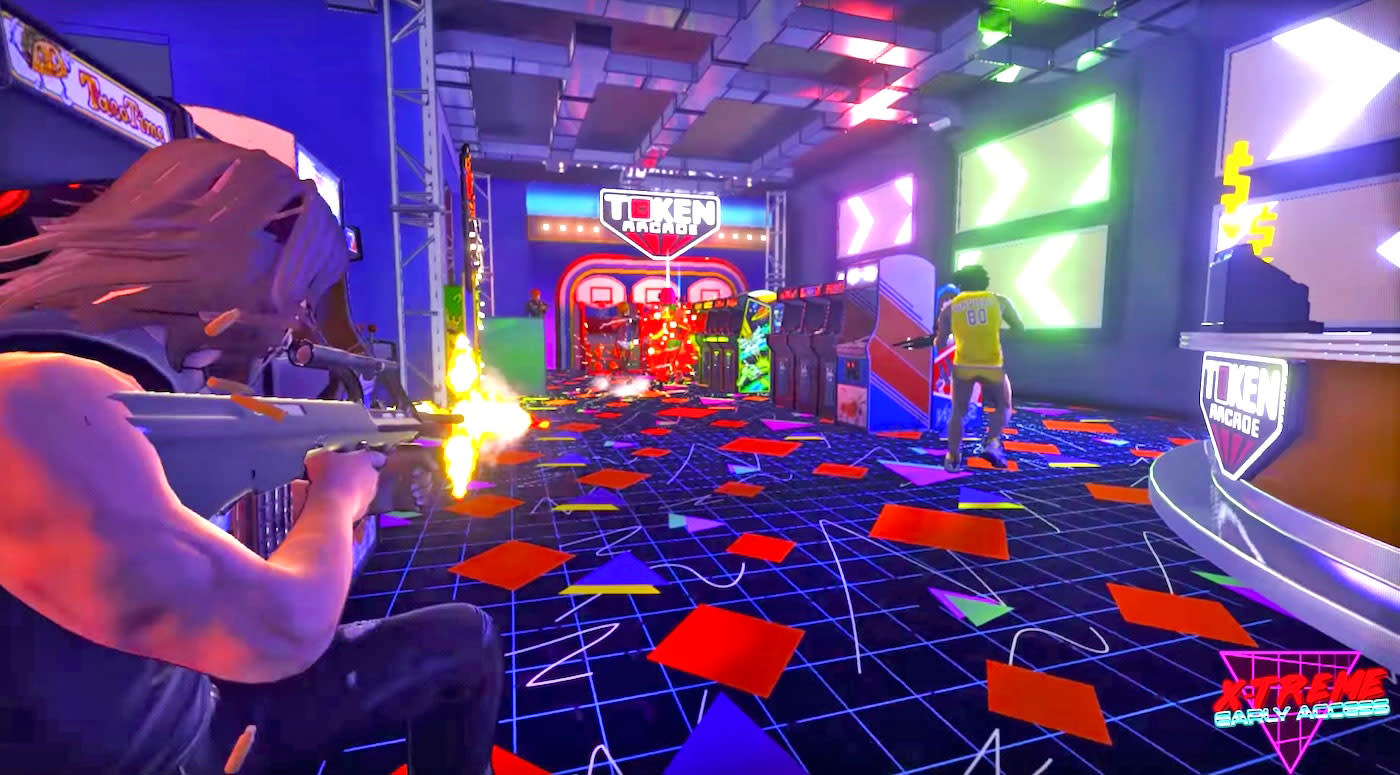 That didn't take long. After announcing that LawBreakers wasn't living up to expectations (and making enough money), and teasing a new project on Friday, developer Boss Key has revealed the "passion project" it teased. Try to feign surprise when you find out that it's a free-to-play battle royale game. On the surface, Radical Heights stands out from the crowd with a vibrant, quasi cel-shaded, retro-futuristic game-show vibe that hearkens back to the '80s. Meaning, there are a lot of extreme pastels and hot pink triangles complementing its over-the-top Saturday morning cartoon tone.

Based on the trailer below, the game looks like it's every bit an Early Access title. There's footage of a small team battling it out with an assailant in an arcade, grabbing cash from destroyed cabinets bathed in neon lights and drowned in intentionally cheesy music, but animations are stiff and the gunplay looks fairly rough.

You can apparently bank money that you pick up and use it to buy new weapons from vending machines, rather than finding armaments randomly scattered about the map a la PlayerUnknown's Battlegrounds. And seemingly in tribute to Insomniac Games' early Xbox One title Sunset Overdrive, there are trampolines scattered about, offering quick access to rooftops and higher vantage points.

It might even be an open-world game, as there's an emphasis on riding bicycles (and doing BMX tricks) in the trailer, along with footage of various locales like golf courses and suburban neighborhoods. One would expect that as match time dwindles down, the "dome" you're playing in will shrink. Or it might not. We don't have long to find out, though: Radical Heights launches on Steam's Early Access program for work-in-progress games tomorrow, April 10th.

In last week's LawBreakers announcement, Boss Key said that pivoting an existing game to free-to-play wasn't possible without publishing planning and additional resources. As such, it wouldn't work for the studio's freshman effort. When LawBreakers was first announced it had a much more vibrant art style and was, you guessed it, F2P.

The post also specifically said that the team's next project was something it had complete creative control over; it looks like Boss Key is self-publishing Radical Heights. So, the new project's direction adds more evidence to the theory that that LawBreakers publisher Nexon and Boss Key didn't agree on certain elements.

The thing is, Early Access battle royale games are a dime a dozen these days. Will what Radical Heights has to offer be enough to pry millions of people away from Fortnite (which also uses a cartoony and vibrant art style) or PUBG? Tomorrow's just a day away.

In this article: av, battleroyale, CliffBleszinski, earlyaccess, f2p, fortnite, FortniteBattleRoyale, gaming, pc, pcgaming, playerunknownsbattlegrounds, pubg, radicalheights, steam
All products recommended by Engadget are selected by our editorial team, independent of our parent company. Some of our stories include affiliate links. If you buy something through one of these links, we may earn an affiliate commission.