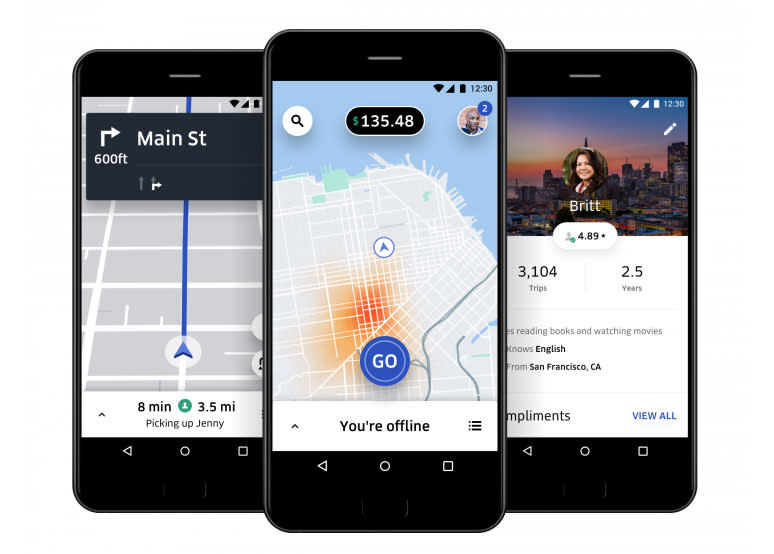 As part of a grand campaign to repair its reputation, Uber updated its driver app last fall with a 'share my location' feature to comfort its contractors during long shifts. But the software's newest version out today is very much an overhaul that redesigns its interface with input from the drivers themselves. What did they want? To easily see how much money they've made in a shift so far and get quick access to badges and other 'gamified' elements of the Uber driving experience.

Most obvious is the earnings tracker, which sits front and center at the top of the screen. Instead of harassing drivers with text messages, there's now a 'status bar' at the bottom that indicates good market conditions (more fares, better rates, etc) and highlight those locations on the map. Other changes reshuffle information delivery: Offers for insurance and motorist classes are sent to an in-app inbox, while a driver's rating page now lists compliments and the total number of trips in addition to complaints to present a more holistic and human picture.

The new app version also has a fix for a connectivity issue that prevented drivers from finishing rides without a signal, making dropping fares off in internet dead zones a problem. Now the app will record the driver's GPS location when ending a ride and upload it later.

While Uber has likely been working on this update for awhile, it's also a convenient time to cozy up for drivers now that the company's autonomous car project has been delayed after last month's fatal crash.

In this article: app, drivers, mobile, ridesharing, services, uber
All products recommended by Engadget are selected by our editorial team, independent of our parent company. Some of our stories include affiliate links. If you buy something through one of these links, we may earn an affiliate commission.