The two best Moto Gs yet have very different priorities.

Year after year, Motorola churns out some of the best inexpensive Android phones money can buy and parent company Lenovo is eager to keep that streak alive. That's where the new Moto G6 and G6 Play come in — Motorola has embraced some of the trends that have made this year's premium phones so palatable, and that's great news for smartphone shoppers who don't feel like shelling out flagship-level wads of cash.

Now, I know what some of you are thinking: isn't there a usually a G Plus model too? You'd be correct: the G6 Plus packs a 5.9-inch, 18:9 screen and a camera with an f/1.7 aperture and dual-pixel autofocus. The reason info is so scarce is because Moto doesn't plan to bring it to the United States — no launch means no hands-on time and very little in the way of detail. Boo. It will be arriving in the UK alongside the other G6 models on May 2nd, though, starting at £269 (around $382 converted).

I'm not too disappointed, though, because the standard Moto G6 is actually quite a bit nicer than I expected. For one, it has the sort of glass-wrapped body one would normally associate with premium phones — the device's back is wrapped in Gorilla Glass 3 for scratch and scuff protections, though it probably won't help much in the event you drop it. The mostly metal bodies we got with last year's G5 series could handle meetings with asphalt much better, but the Moto X4-inspired style on display will be worth the trade-off for some. (Count me in on that one.)

Motorola also jumped on the extra-tall screen bandwagon with its 18:9 Max Vision display — this one in particular is 5.7 inches and runs at Full HD+. In general it's plenty crisp and vivid for a budget phone, but as with earlier models, you might run into some trouble in direct sunlight. Even when we popped outside to snap a few photos of the New York skyline — in the shade of a tall hotel, no less — it was sometimes difficult to read.

And speaking of the camera, Motorola fitted its G6 with a dual camera comprised of a 12-megapixel and 5-megapixel sensor. Diehards will remember that last year's G5S Plus was the first Moto device with a dual camera, and the experience here seems very similar — expect a pleasant level of detail and lively colors. Having two rear cameras also makes depth effects possible, and under solid lighting conditions, the dual camera did an impressive job isolating our mostly willing subjects from the background. Not bad at all for a $250/£219 phone. Like a handful of other smartphone makers, Motorola has also released the value of weaving AI into its camera experience, but its approach is a little different.

Unlike, say, Huawei's P20, the G6 doesn't recognize what's in front of the camera and tweak its settings accordingly. Once you've downloaded the necessary databases, though, you can point the phone at landmarks and other objects to get more information about them without having to leave the camera app. It's a great idea in theory, but it could use a little fine-tuning. When I pointed the camera at One World Trade — easily one of the most recognizable landmarks in New York City — the camera drew a total blank. Not a great start. Object recognition fared much better, though. When I pointed the camera at an apple, the G6 offered up a surprisingly pertinent list of web links. Even better, the G6 correctly identified my SLR as a Canon 6D and threw up links to even more information. I didn't get to test these AI chops too thoroughly but considering the Galaxy S9 and LG's V30S ThinQ couldn't correctly identify my specific camera model, it sure seems like Motorola's in-house AI efforts are on the right track. 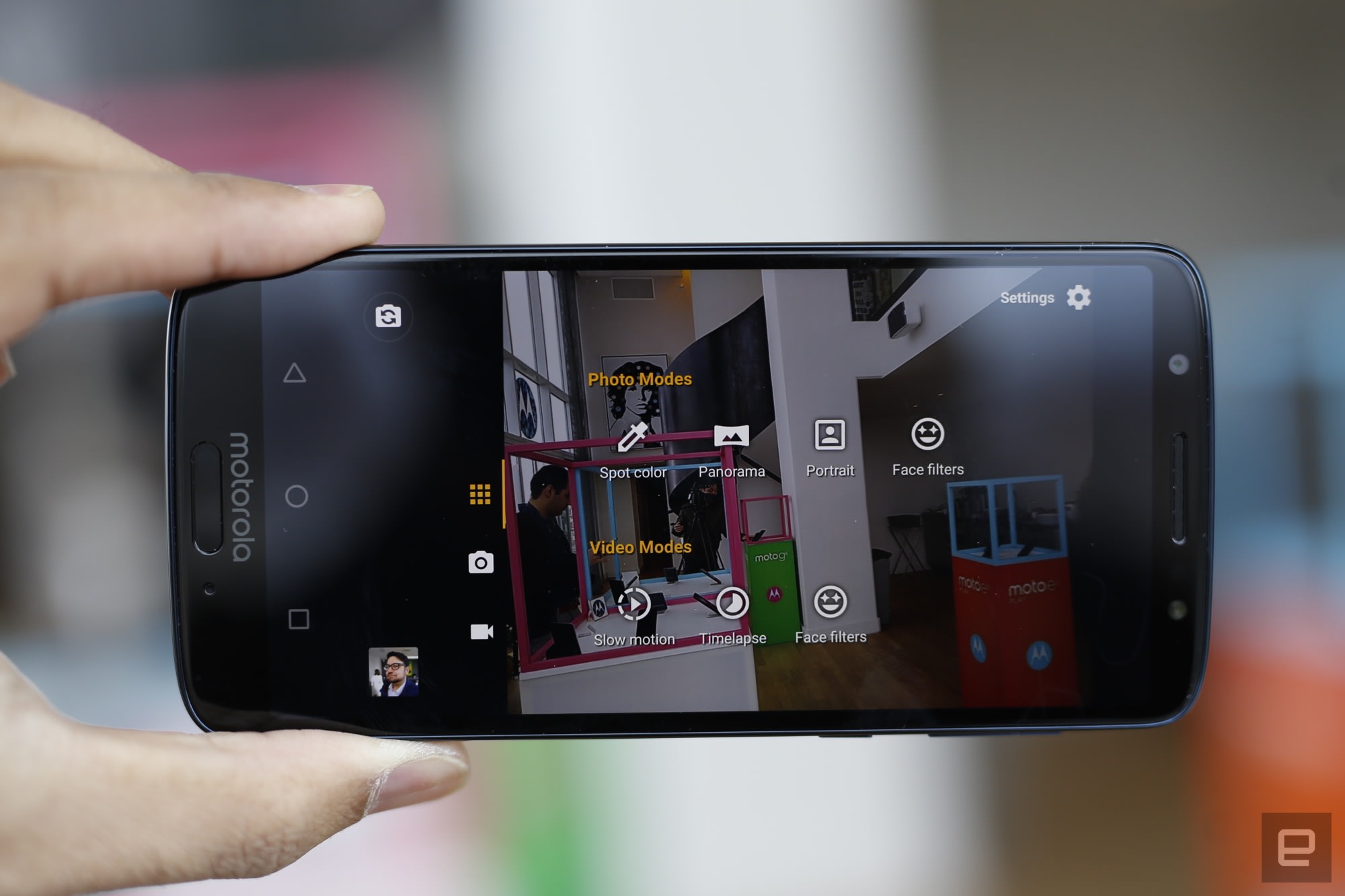 The 8-megapixel front camera has gained some new (if familiar) tricks, too. Most notably, you can now gussy up your face with a set of Live Photo effects in case you want to strap on a set of virtual rabbit ears or wail into a microphone — complete with concert lighting — without jumping into Snapchat or Instagram. You'll also be able to use that camera to unlock the phone with your face, but it's a purely 2D solution — that is, it checks your face against stored image data, which makes for super-fast (albeit less secure) authentication.

As usual, Motorola didn't stray too far from stock Android 8.0 Oreo here, and I'm still perfectly pleased by that. That light touch with software combined with an octa-core Snapdragon 450 keep everything moving at a respectable pace — just don't expect to do any heavy gaming on this thing. Depending on the model, you'll also get either 3GB of RAM and 32GB of storage, or a slightly snappier 4GB of RAM with 64GB of storage. Don't fret about free space too much, though: you can add microSD cards as large as 128GB. There's also a 10W fast charging USB-C adapter in the box, for rapid refills. 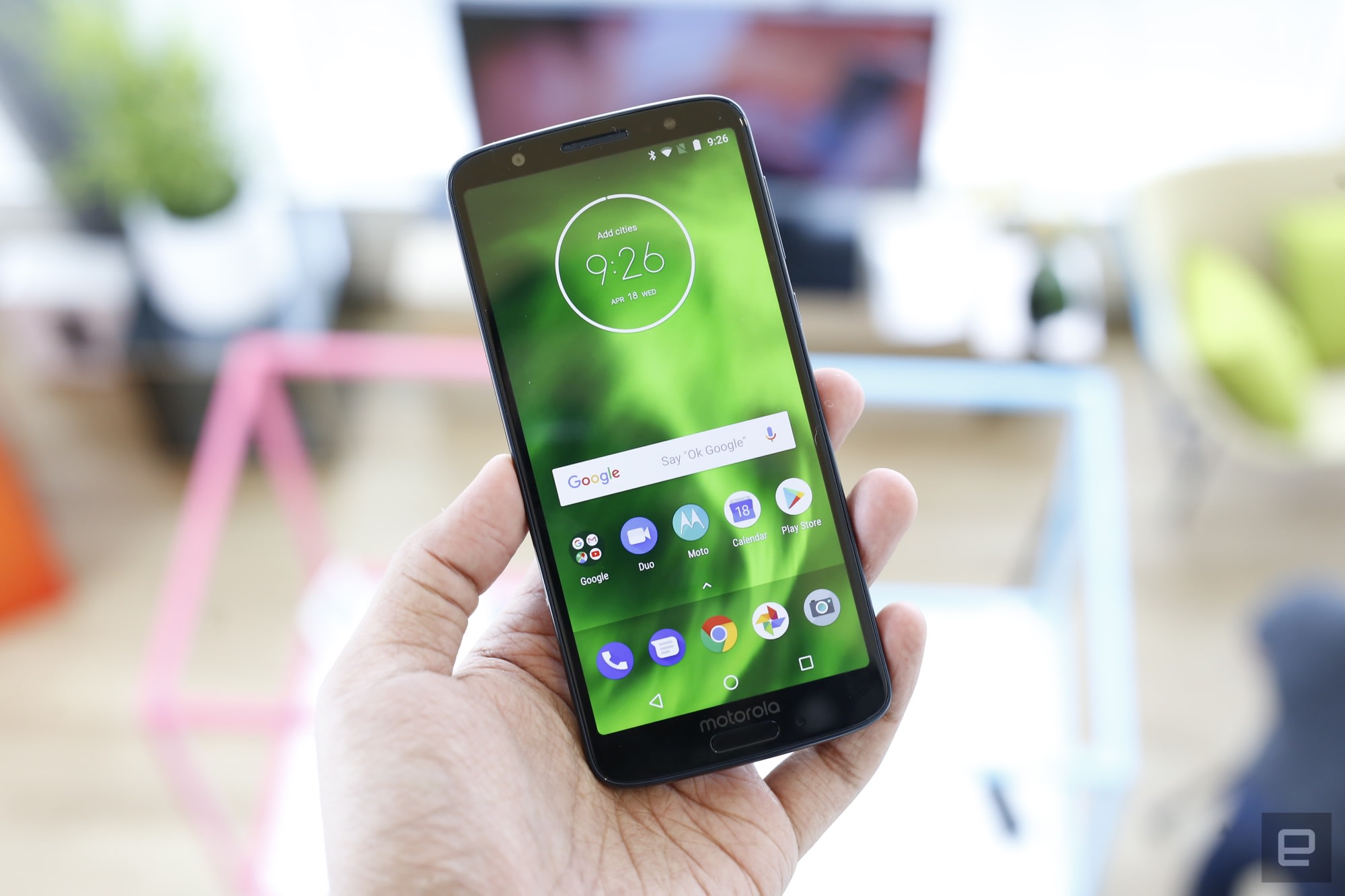 The dual camera and the AI frills won't appeal to everyone, which is why Motorola put together a more practical option: the Moto G6 Play. At $200/£169, it's a less expensive option than the standard G6, but you'll get a much bigger, 4,000mAh battery for your trouble. Combine that with a 5.7-inch Max Vision screen running at 720p and a less powerful Snapdragon 427 CPU and you've got a device that, while not tremendously speedy, should get you through your daily routine with plenty of battery life left over. (If performance is a concern, you could shell out a few extra bucks for an improved version with 3GB of RAM instead of 2GB, and 32GB of storage rather than 16GB.) Motorola claims the G6 Play can squeeze 36 hours of use out of a single charge, but we'll have to see about that.

Considering how well the regular G6's dual camera seemed during our hands-on time, it's a shame Motorola couldn't squeeze it into the less expensive G6 Play. Instead, there's a more traditional 13-megapixel rear camera (phase detection autofocus) with an LED flash sitting next to it. To Motorola's credit, however, the G6 Play definitely doesn't feel like a $200 phone — it's wrapped in a glossy non-Gorilla glass and has a reassuring heft to it.

Between these strong mid-range options and the more modest Moto Es the company also announced, it seems clear Motorola is trying to sew up the low-cost smartphone market for itself. The competition is only going to get more fierce as the year rolls on, but Motorola has proven itself to be one of the world's best — if not /the/ best outright — at crafting quality, inexpensive devices. Based off what I've seen so far, Moto just might hold onto that crown for another year.

All products recommended by Engadget are selected by our editorial team, independent of our parent company. Some of our stories include affiliate links. If you buy something through one of these links, we may earn an affiliate commission. All prices are correct at the time of publishing.
Motorola aims to keep the cheap phone crown with the G6 and G6 Play
android
android8.0
androidoreo
G6
G6Play
gear
mobile
motog
motog6
motog6play
motog6plus
motorola
oreo
usb-c