Huawei may be best known for US retailers not stocking its wares, but regardless, the company continues to ramp up its flagship smartphones. In the past few years, phones like the P9 made a lot of us stand up and take notice, thanks to classy design touches and Huawei's own imaging tricks.

Its next phones, the P20 and P20 Pro, take that latter part even further as the company tries to spar with Samsung and the rest with a tapestry of AI skills and so very many camera sensors. There's so much going on when it comes to imaging (both in terms of hardware and software) that, at least during my short time with both phones, I couldn't test out all the modes and use cases. I'll say this, though: Huawei is taking its smartphone cameras very seriously.

This time around, the P series is gently curved at the edges, with a glass design that softens the sides of both the P20 and the bigger P20 Pro. Both phones are thin, too: The P20 is 7.65mm thick (with a 3,400mAh battery), while the P20 Pro measures up at 7.8mm, with a larger 4,000mAh battery -- that's a massive battery for a phone this size, outclassing even the Galaxy S9 Plus. If it helps you to visualize those millimeters, the two models bookend a 7.7mm-thick iPhone X.

Beside the curves, the P20 also introduces a new color-gradient finish that Huawei's calling Twilight: a blend of dark blue, purple, turquoise and ... was that a shimmer of crimson? One colleague commented that it was a lot like the "pearlescent paint" finish you might see on a high-end sports car. It's pretty hypnotic, but while journalists seemed to coo over it, it's a little too showy for me. People buy shiny, glitzy phone cases, not phones. Still, it's different. 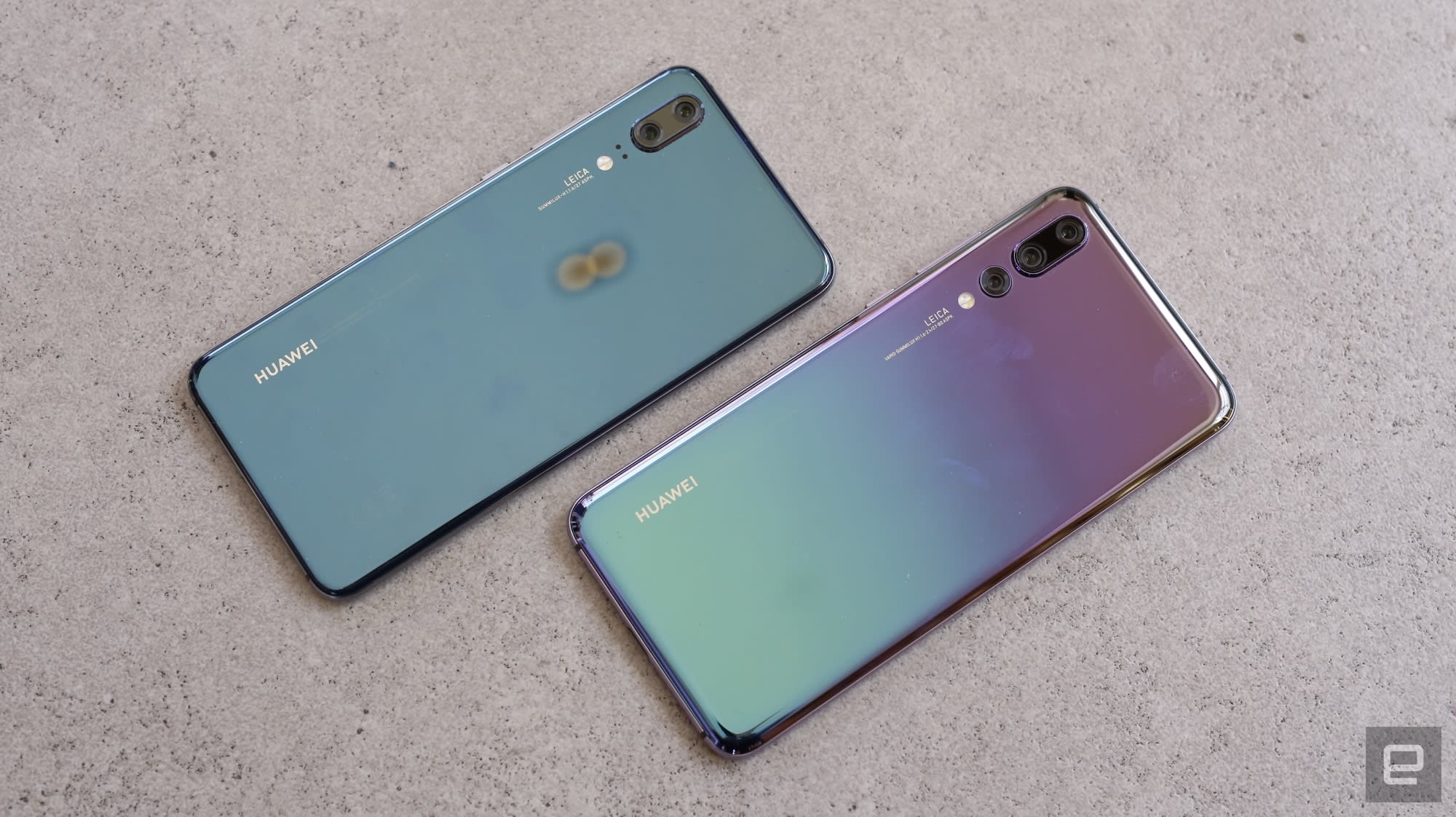 For more restrained tastes, the P20 is also available in black, champagne gold, pink gold and midnight blue, while the Pro gets the same selection minus the champagne gold. Regardless of your color choice, it's a classy-looking phone -- and solid too. It's just that Huawei hasn't quite figured out how to give its family of phones character just yet. Nothing makes me go "Oh, that's a Huawei phone" -- for better or worse.

It's also worth pointing out that you'll get a more advanced OLED screen with the bigger P20 Pro, and a more typical RGBW LCD display on the standard P20. I think the OLED looks better, but the LCD screen isn't a deal-breaker for smaller hands. They both share a 2,240 x 1,080 resolution with a very wide 18.7:9 screen ratio, and rest assured, with both, you get a notch. Or not! If you're notch averse, a software setting shortens the height of the screen so you can pretend it doesn't even exist.

The P20 Pro also benefits from an upgraded IP67 rating for water and dust, while the P20 has IP53 like last year's Huawei phones. In short: the Pro model is even more protected, which brings it in line with rival flagships. 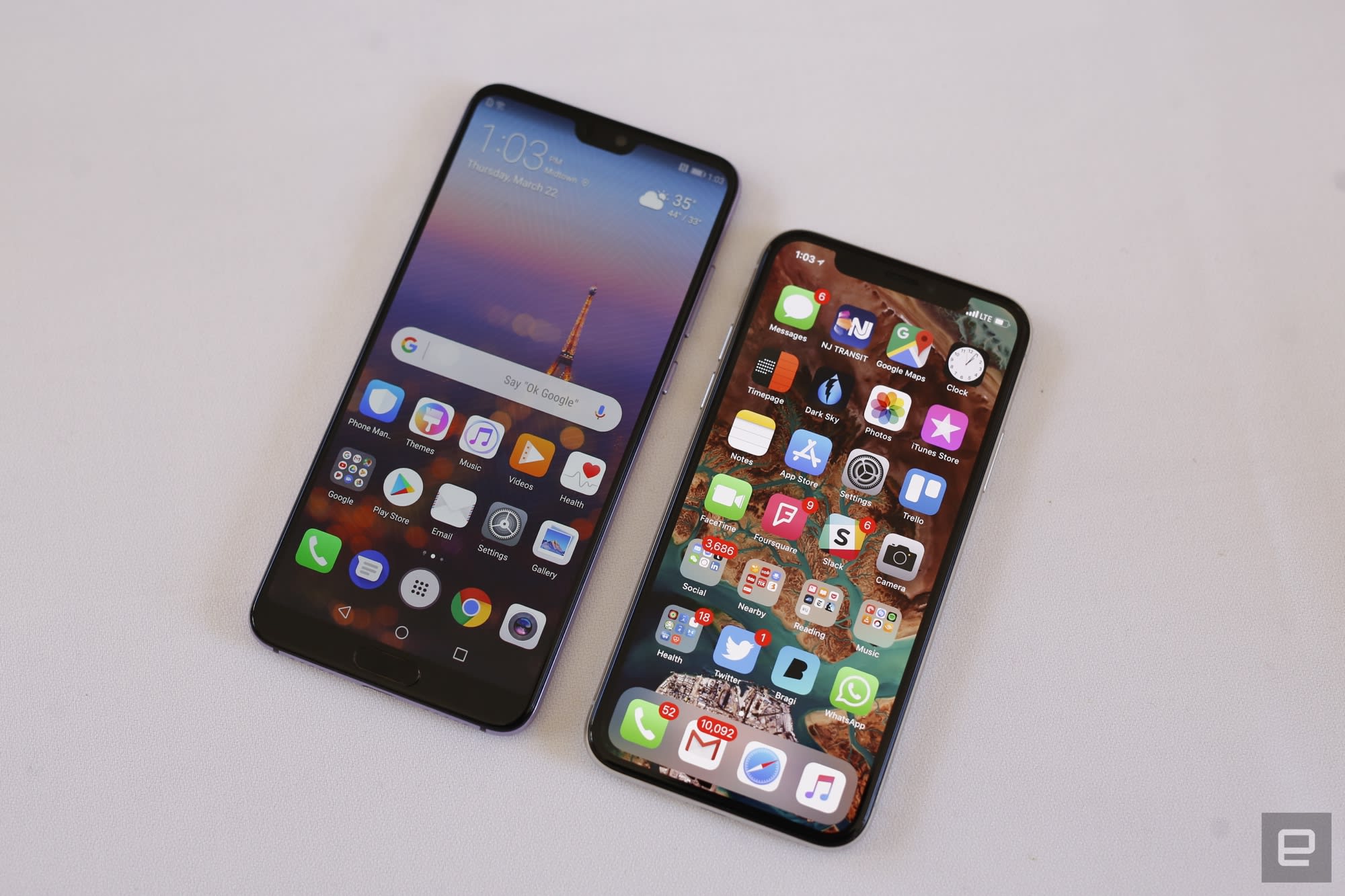 Unlike on older phones from the same company, however, the fingerprint reader returns to the front. Apparently tech companies still can't decide the best place for it. (It's the back, by the way.)

To Huawei's credit, it's at least tried to squeeze some extra functionality into the venerable home button. The effect is a little like the gestures that Apple folded into its home-button-less iPhone X, although things work differently. A light press on the main button will act as a back function, while more sustained prodding will take you to the home screen. There's even the ability to swipe left and right.

As with many other Android phones, you can also hide the usual screen keys and use the home button/sensor to navigate around everything -- it's another way to keep that screen in full use.

So far, not much AI talk, right? Both phones run on Huawei's homemade Kirin 970 processor, which integrates neural processing for certain tasks. In this case, it helps the P20 initiate Face Unlock in less than half a second. Huawei didn't elaborate on how it works -- is it more secure than retina scans, infrared and other techniques used for face unlocking elsewhere? We'll update when we hear more from Huawei.

In reality, all the AI smarts center around cameras, as proved by Huawei's new addition to the battle of smartphone spec sheets: triple rear-facing cameras. 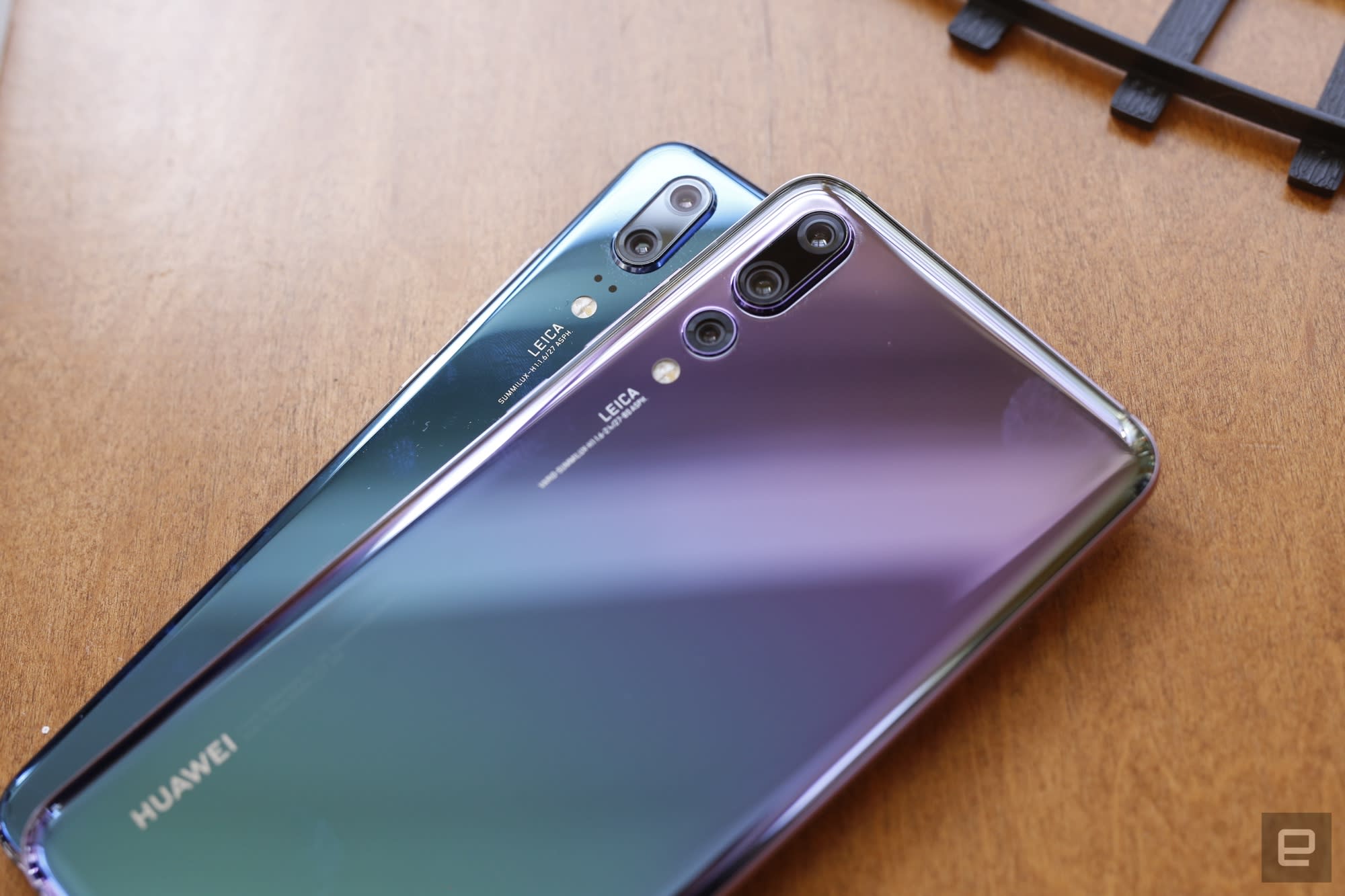 As rumored last week, Huawei's P20 Pro has gone to town on the megapixels, and it might just fill that Nokia-shaped smartphone camera hole in your heart. Let's break down that imaging array.

Coined the "Leica Triple Camera," a 20-megapixel monochrome sensor (with f/1.6 lens) stands separate from the other two, which combine an 8-megapixel telephoto shooter with f/2.4 lens and optical image stabilization and a 40-megapixel camera with f/1.8 lens.

On the regular P20, there's a 20-megapixel monochrome sensor again, but it's paired with a single 12-megapixel RGB camera sensor. Both phones get a rather epic 24-megapixel front-facing camera, though, because our faces demand more pixels.

In classic TV shopping style, ladies and gentlemen, that's not all. There's a laser transceiver for speedier focus, a flash and also a separate color temperature sensor to improve white balance accuracy. 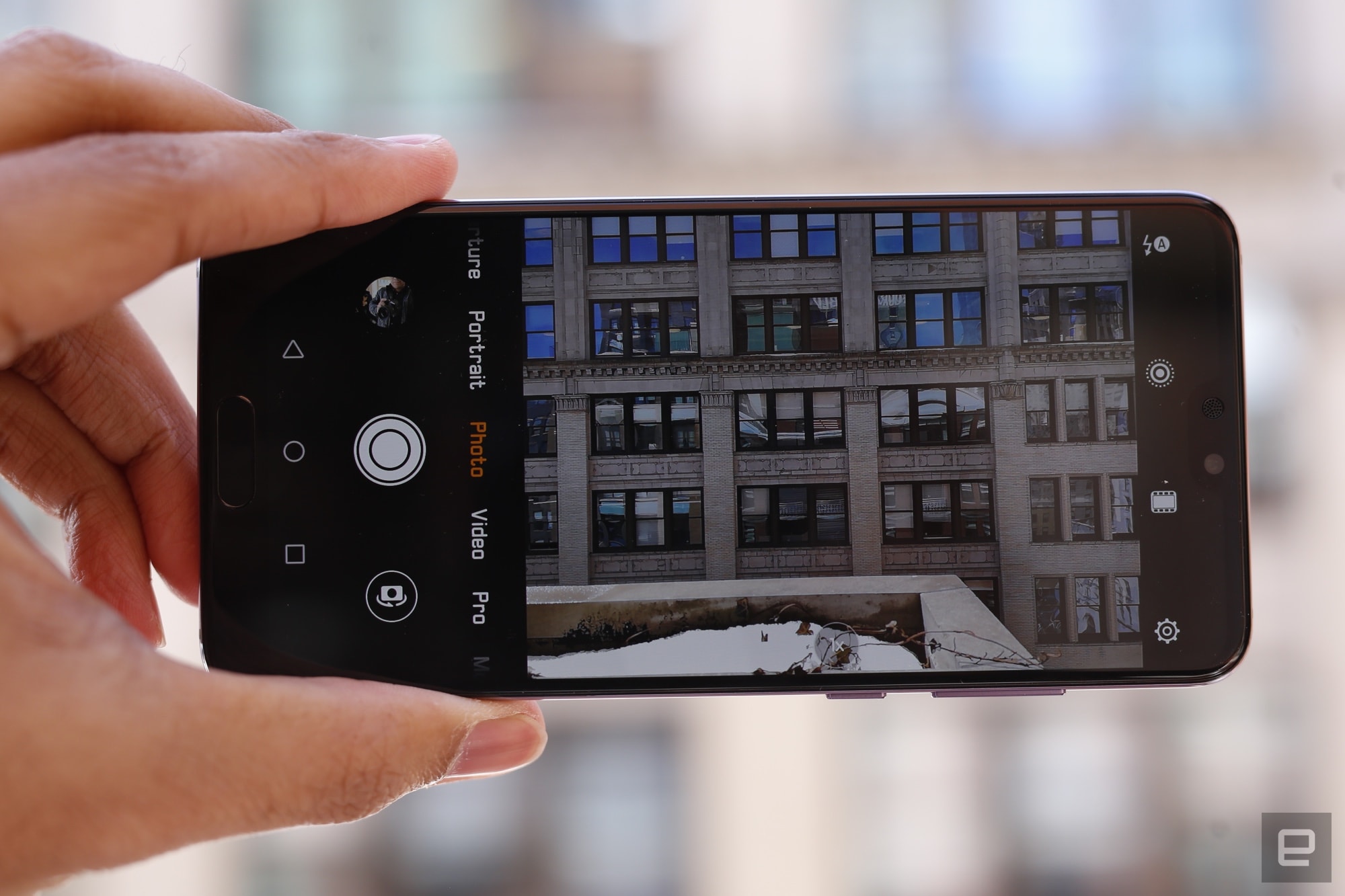 The medley of sensors are complemented by no fewer than four different focus techniques: laser (as mentioned earlier), phase detection autofocus, and depth and contrast detection. This is where Huawei brings in its AI chops for further improvements, with a "predictive focus" that detects movement in a frame (say, a flower in the breeze) and matches focus with more precision. And if you're tempted by the super-slow-motion tricks bandied around by Sony's latest phones and the Galaxy S9, rest assured: There's 960fps super slow motion inside the P20 too. It is, like its rivals, limited to 720p resolution.

Huawei hopes you're impressed by spec sheet numbers, because the P20 Pro's camera has plenty more of 'em. That high-megapixel RGB sensor is 1/1.7 inches in size -- as compared with the 1/2.55-inch sensor in Samsung's Galaxy S9. Bigger sensors typically mean better pictures with more detail because they capture more light. The P20 also has a max ISO setting of 102,400 that apparently can glean photos at a mere 1 lux -- a little higher than a moonlit night. That is an unusually high ISO option: The typical limit for smartphones that even offer ISO settings is around 6,400.

Huawei positions the P20 as both the most advanced smartphone camera and the most intelligent, and the latter is where things get even more interesting. The company is using the term "Master AI" to explain how the camera taps into different settings and modes depending on the photo being taken. (Sound familiar?)

The P20 (Pro or otherwise) will automatically switch to the right mode to get what it believes to be the perfect photo. This might involve a splash of extra bokeh blur for your portraits or a macro option for beautiful floral close-ups. The aim here is to reduce the need for you to plumb the depths of the settings menu. (I was impressed by the depth of settings on the phone's "Pro" mode, but I also understand how it could put a lot of people off: A lot of us just want to take a good picture.) 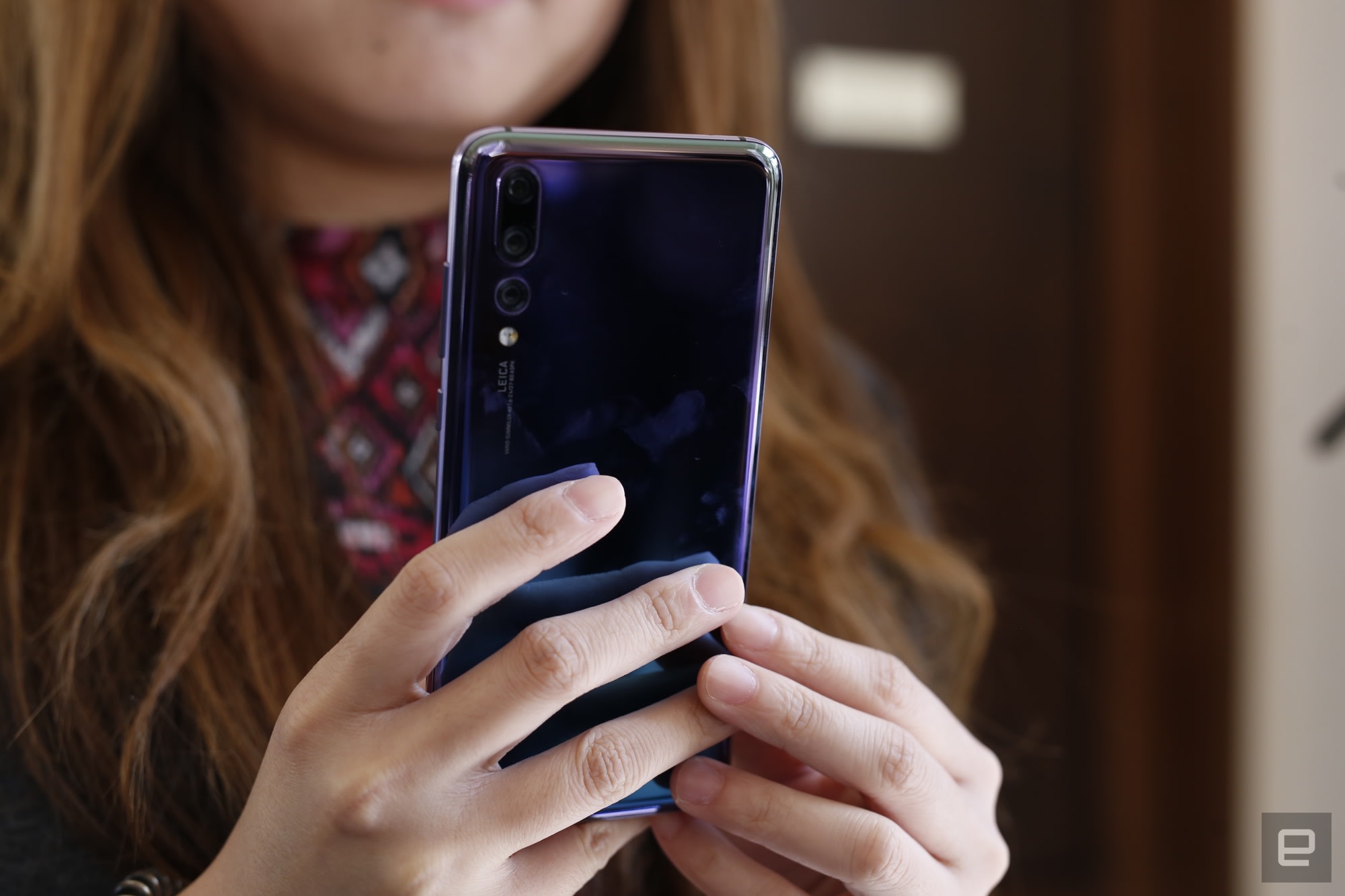 During my briefing, the spokespeople outlined how the company reached out to professional photographers for their opinions (and camera settings) for different photography subjects and baked that into this master AI. Interestingly, this led to some extra contextual settings: different food photography modes for, say, western food, asian cuisine and desserts. While the explanation was a little loose, the phone will attempt to synthesize settings for multiple themes: it'll use its discretion to capture your pet and what you're having for lunch -- if that's what you're shooting. There's a dizzying 19 different subject modes here for the P20 to choose from, from landscape to food blogging, from cats to night photography.

These assistive modes within the camera app will even aid your photo composition, leveling off landscape shots, and when it senses any overly enthusiastic zooming during a group photo, it will pan out slightly to get the whole gang into frame. I like the idea of idiot-proofing smartphone photography -- a lot -- but perhaps the coolest showcase I saw on the P20 was AI-augmented image stabilization.

When you try to take a long-exposure shot -- say, for a neon city skyline or to make a blurry waterfall shot -- the P20 will use image detection know-how to smooth things out, taking up to an eight-second-long still. It works not only on stills (something I'm really looking forward to trying out further myself) but also on video. That's just one of the major features. It may be a single camera app, but there's an awful lot to unpack here.

The numbers and spectacle around the cameras suggest that the P20 Pro, especially, is capable of so many imaging tricks, but from my short time with the devices, it's a mix of fantastical results and niche-bordering-on-pointless. (Do you need separate camera modes for cats and dogs?) The spec sheet is impressive, but can the P20 series deliver with all this imaging tech? In the end, does it make for a better smartphone camera? At the very least, I can't wait to test out all of the P20 Pro's tricks further.

Cherlynn Low and Chris Velazco contributed to this report.