Three years ago, when Google and Levi's announced their smart jacket, the tech industry's obsession with wearables was at its peak. Fitness trackers and smartwatches were proliferating, while every other day a new item of clothing was getting the connected treatment. At the time (and even today), the Levi's Commuter Trucker jacket had a refreshingly simple premise. It's a garment targeted at cyclists (or, y'know, jean-jacket wearers) who can shell out $350 to avoid repeatedly whipping out their phone while traveling. It has touch-sensitive fibers woven into the cuff so you can swipe or tap on your wrist to carry out quick tasks thanks to Google's Jacquard technology. Jacquard's not here to track your fitness or run your life -- it just wants to make your commute a bit easier. Because of that, the first iteration focused on a relatively narrow set of applications -- you could tap or swipe on the left cuff to control your music, have your incoming messages read out to you or find out where to make your next turn. A Bluetooth dongle tucked away in the sleeve talks to your phone to make all this happen, and is so unintrusive that I often forget it's there.

Since launching Jacquard, Google's added some small updates, letting you find your phone or make the Bluetooth dongle light up. But nothing superexciting.

Now it's getting an update that brings a few more useful features. With the rollout of Jacquard 1.2 this week, you can bookmark places you pass in the app and get alerts when your Lyft or Uber are arriving. If you own a pair of Bose QuietComfort 30 or 35 headphones, you can use your jacket to toggle noise-cancellation. These changes aren't groundbreaking, but they are useful in specific scenarios.

I definitely appreciated knowing when my ride was arriving without having to stare at my phone. The jacket vibrated when my taxi was on the same block, giving me ample time to go outside. Swiping on my cuff while the tag was vibrating also made my phone read out the car's model, color and license plate number, which eliminated my need to take out my phone altogether.

I set my sleeve to bookmark my location when I brushed outwards from my wrist towards my fingers, and went about saving places like sample sale popups and restaurants I wanted to check out. For people who like exploring their cities, this is also a useful addition.

The new updates work, as do the other existing features, as long as your jacket remains linked to your phone. But the connection between the Bluetooth tag and my Pixel 2 frequently dropped out, rendering the garment useless. Curiously enough, this was much less of a problem when I wore the jacket in San Francisco for a week -- it remained linked to my phone as long as it was within range. When the smart jacket (smarket?) (ed note: No.) does perform as it's supposed to though, it almost feels like magic, I really appreciate the convenience it adds. When the tag vibrated, indicating I had an incoming message, I swiped on the sleeve and my phone read out what my friend texted me. Little touches like this added to the endgame of not having to take your handset out while you're on the go (if you don't want to) any longer, which frankly, would be ideal. 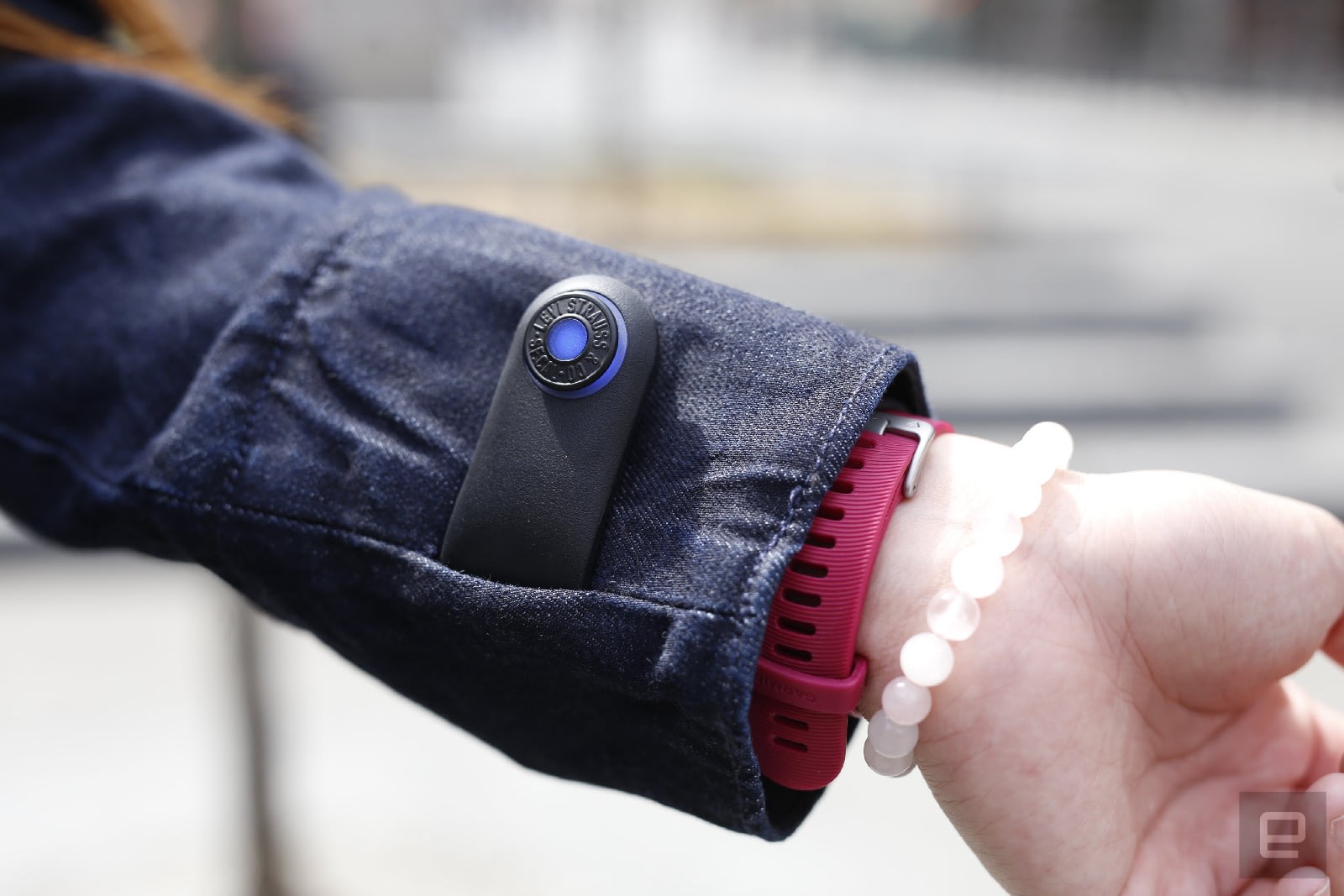 At $350, the Commuter jacket isn't cheap and is at least twice the price of the "dumb" garment it's based on. But it's a high-quality, durable piece of clothing that's stylish enough to match most outfits.

I'm more intrigued by what Google might come up with in the future. Jacquard isn't meant to exist solely in jacket sleeves. Project lead Ivan Poupyrev told Engadget that he would like to see the platform become "a zipper or a button -- part of apparel that any company can buy and integrate themselves at some point."

Even as his team continues to discover what makes the most sense for Jacquard and push through more functions in updates to come, Poupyrev isn't going to take things too seriously. "Things are going to be whimsical, funny and interesting," and to prove his point he highlighted the ability to make the tag light up for no real reason. For now, it has a limited audience, but the Jacquard platform holds plenty of promise, especially as Google continues, bit by bit, to explore ways to make it truly useful.