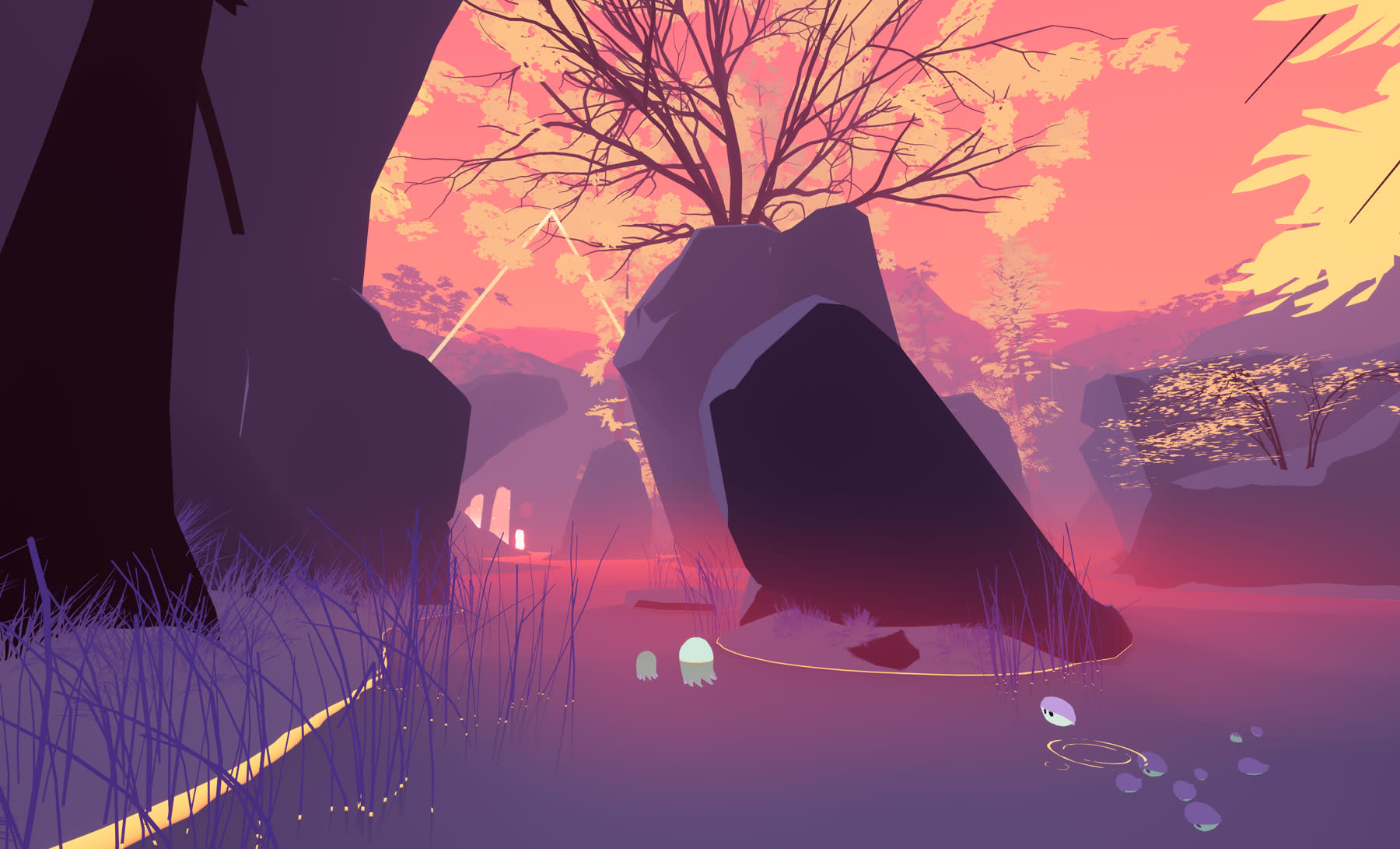 Lose yourself in the ever-shifting 'Shape of the World'

Sometimes I need a video game that doesn't involve shooting people or decapitating monsters. (Sorry, Bloodborne and Wolfenstein II: The New Colossus.) My brain cells crave something quieter, like a meandering dive through Abzu or a free-roaming session in Skate 3. If you fall into the same camp, I highly recommend Shape of the World, a serene walking simulator set in a colorful and constantly evolving wilderness.

The basic level geometry is fixed -- the angle of the ground, for instance, and the placement of cliffs and caves -- but almost everything else is in flux. As you push forward, a vibrant array of trees and bushes will randomly blossom in front of you. Some have large, beautiful canopies, while others resemble damp stalagmites. Fantastical creatures, meanwhile, will burrow up from the ground or soar between branches, looking for friends and food. It's almost like a developer is hiding in the background, building the game in real-time as you delve deeper into the world.

Wander enough and you'll eventually find some triangular gates. Pass through one and the game will change dramatically, swapping out the world's entire color palette and the catalog of fauna that spawns at your feet. It's a strange, soothing experience that encourages aimless exploration. There's no danger in the game -- none of the creatures will attack you, and you won't take damage from a spectacular fall. It doesn't have a timer either, so there's no sense of impending doom to worry about.

The quiet atmosphere and procedural generation are similar to the highly controversial No Man's Sky. Only here there's no busy work or convoluted systems to manage. It's unashamedly small in scope, eschewing the convoluted RPG systems that are so easy for developers to get wrong.

Shape of the World was created by Stu Maxwell, a VFX artist at Gears of War developer The Coalition, and a small team called Hollow Tree Games. Maxwell used to live near Stanley Park, a 400-hectare oasis near Vancouver, Canada. At first, the seemingly infinite number of trails felt like a labyrinth to Maxwell, waiting to be untangled and understood. "It has this exploration game feel," he said with a chuckle. "Because at some point you can't figure it out, and you just don't know which way you're facing anymore. You're like, 'er, that's uphill, so I guess that's maybe West?'"

Maxwell enjoyed getting lost, though. Most of the park is surrounded by water -- Vancouver Harbour and English Bay -- which meant that he was always guided back to a familiar path eventually. "You're always safe," the developer said. He wasn't the classic outdoors type, but quickly fell in love with the forest and its calming properties. There was always something new to find, such as hidden trails and exceptionally tall trees. "There's pleasure in these little discoveries," he said. Eventually, Maxwell decided to channel these experiences into a video game. They became Shape of the World, which was successfully funded on Kickstarter in June 2015.

As you stroll through the game's digital foliage, you'll notice that some of the gates are in hard to reach locations. To access them, you'll need to trigger a group of otherworldly stones nearby. The task is simple enough — you merely walk up to the stones, tap them all and watch as they magically rise out of the ground. Once they've all been activated, a floating boardwalk will appear nearby, creating a path to another part of the map.

Occasionally, you'll also notice clumps of seeds hovering just above the ground. Pick them up and you'll be given a never ending supply to throw around and plant in the soil. The next time you walk through a gate, the seed you collected will be added to the roster of trees that can grow around you procedurally. The oldest ones are knocked out of the algorithm, ensuring that each shift in color, flora and wildlife feels fresh and unique.

Over time, you will slowly build up a collection of interlocking gates and boardwalks. Follow them and you'll naturally trend upward, away from the valley and shoreline you started in. That's because the game is cleverly designed around a mountain looming in the distance. Each level, or elevation, is defined as a "chapter" with its own collection of themed color palettes that cycle every time you walk through a triangular gate.

That's the extent of the game's complexity, though. There are no traditional quests or puzzles to solve. No epic battles or long-winded cut scenes to sit through. Like Journey, Abzu and Flower, Maxwell wanted Shape of World to be friendly and accessible to people who have never played video games before. "Those people take their time," he said. "It's a much longer game for people who aren't experienced with this stuff."

I won't spoil the ending. I will say, however, that it took me roughly two hours to reach the credits. I didn't collect all of the different seeds, though, or trigger every magical stone along the way. Track all of those down and the game can last up to three hours, according to Maxwell. The game's length, though, didn't really matter to me. I was looking for a short break from everyday life, rather than a 30-hour epic like God of War.

Shape of the World never outstayed its welcome and I will gladly jump back in the next time I need to unwind. The procedurally generated nature, after all, means no playthrough should ever be the same.

The game is available now for PS4, Xbox One, PC and Nintendo Switch.