These notebooks can blend in at your business meetings and still rock your LAN parties.

If I asked you to imagine a gaming laptop, flashy designs, colorful lights and beefy chasses probably come to mind. Lenovo wants to move away from that motif and appeal to more users by redesigning its Legion series of gaming systems. For E3 this year, the company is introducing the new Y530, Y730 (in two sizes) and Y7000 laptops, which feature a subtler aesthetic, among other updates. It's also adding four new desktops to its lineup -- the T530 and T730 towers and the cubic C530 and C730.

Gamers come in all shapes and sizes, and they're not all into loud colors or eye-catching logos. Some prefer subtlety, and classier designs, which is what you'll get with the new laptops. For starters, the Y530 laptop, which will be a Best Buy exclusive when it's available in June for $930, is noticeably smaller than its predecessor, and loses the red accents from before. Instead, you'll find an all-black lid with a Legion logo, which some might find more attractive, although others might call boring.

I never really minded the so-called "gaudy" aesthetic of gaming laptops, but I can see the appeal of a powerful rig that doesn't scream "Ready for battle!" During my brief time with the new Legion systems, none of them served as eye-candy, although I did find the Y730's higher-quality design very intriguing. But more on that later.

Lenovo's also moved most of the ports to the back of the Y530, except for one USB A on each side. Your Ethernet, HDMI, power and other assorted USB sockets now neatly line up at the rear, making it easier to keep your cables organized on your desk. The Y530 also features a refined dual fan cooling system that vents out the back using larger blades than before. This should help it vibrate less and therefore make it less noisy.

Up next is the Y7000, which is basically the same device as the Y530 except it's not a Best Buy exclusive. It also costs $30 more than the Y530, and has a more-premium aluminum top cover. There's also a light-up Y logo on its lid, so it's not as subtle as its brother, but offers a nice variation for those who want a different option.

Both the Y530 and Y7000 come with NVIDIA GTX 1050 graphics cards and Intel Core i5 CPUs to start with, and you can configure them with the RAM and storage you'd like, as per usual.

Then there's the Y730, which sits on the high end of the range. It comes in 15- and 17-inch variations, and both are all-aluminum machines that come with customizable RGB keyboards that you can program via Corsair's IQ software. The Y730 comes with overclockable Intel's eighth-generation Coffee Lake Core i5 and i7 processors, as well as an NVIDIA GTX 1050 TI graphics card to start. It also offers overclockable memory by Corsair, and you'll be able to tweak the speeds via the computer's software.

Those are nice specs packaged in a good-looking laptop, and in general I found the Y730s attractive. You wouldn't think, looking at just the exterior, that this is a gaming notebook. I do have to complain about the webcam placement though -- it sits in the center below the screen, much like on the Dell XPS series. That'll make for some seriously unflattering video conferencing. But you do get a much thinner top bezel thanks to this, which is nice. 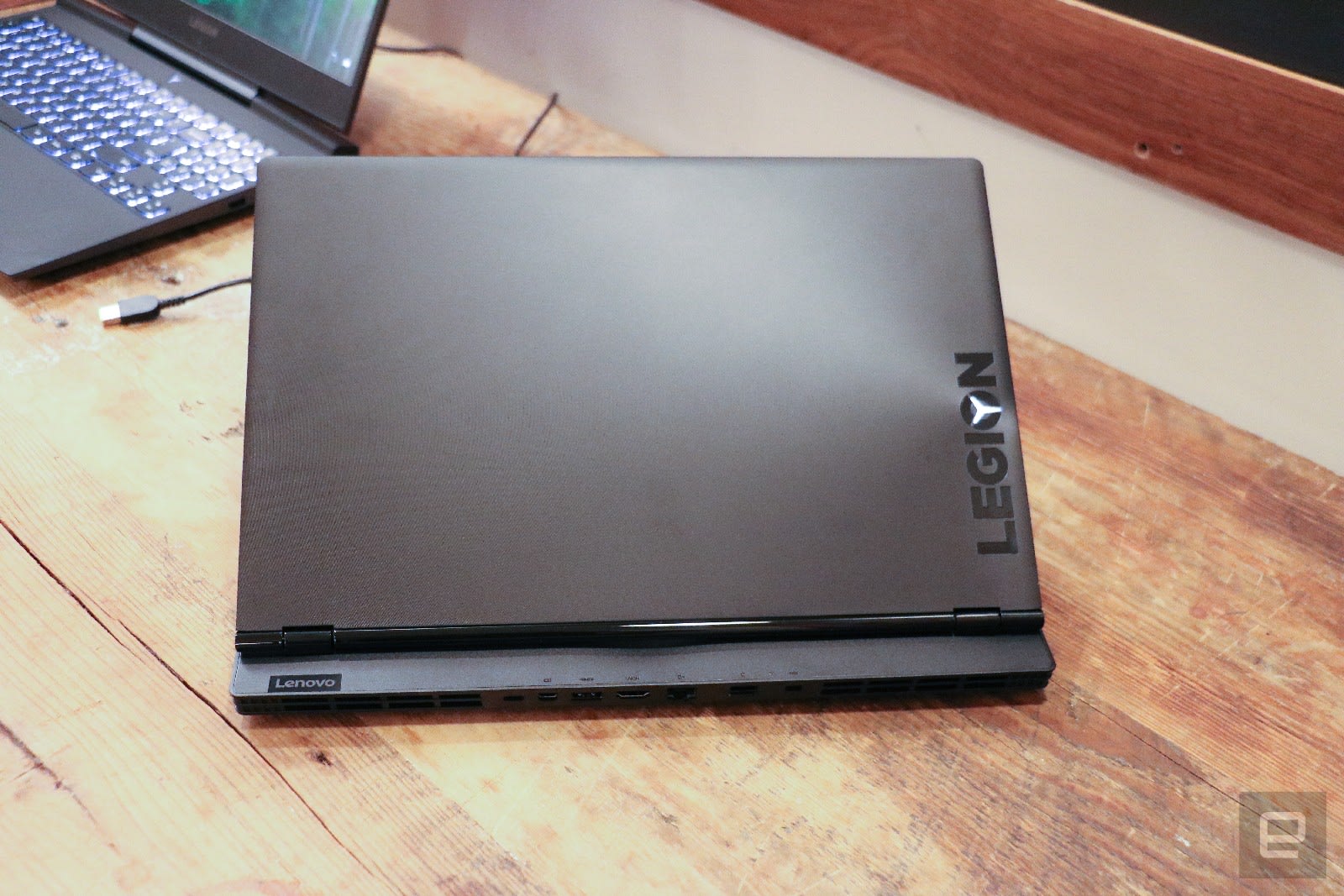 Lenovo also upgraded the screens across the lineup. While they maintain their full HD resolutions, the displays are now brighter, can display more colors and offer higher refresh rates options of 144hz. On the Y730, you can even pick a G-Sync-compatible panel for even smoother gameplay.

Even though Lenovo is trying to class up the Legion series by moving away from loud colors and flashing lights, I couldn't help being entranced by the rainbow colors dancing across the Y730's keyboard. Not all gaming hardware hallmarks are gaudy -- some, like RGB keys, are delightful.

But the company is astute in trying to reach a wider audience with a more-subtle aesthetic. According to Lenovo's reps, its gaming brand ranks at about 8th place in the US. Trying to reach people who have already pledged allegiance to one of the top five companies would be a Herculean task. In going for a less loyalty-driven audience and timing this launch for E3, Lenovo might actually persuade some undecideds to give it a shot.