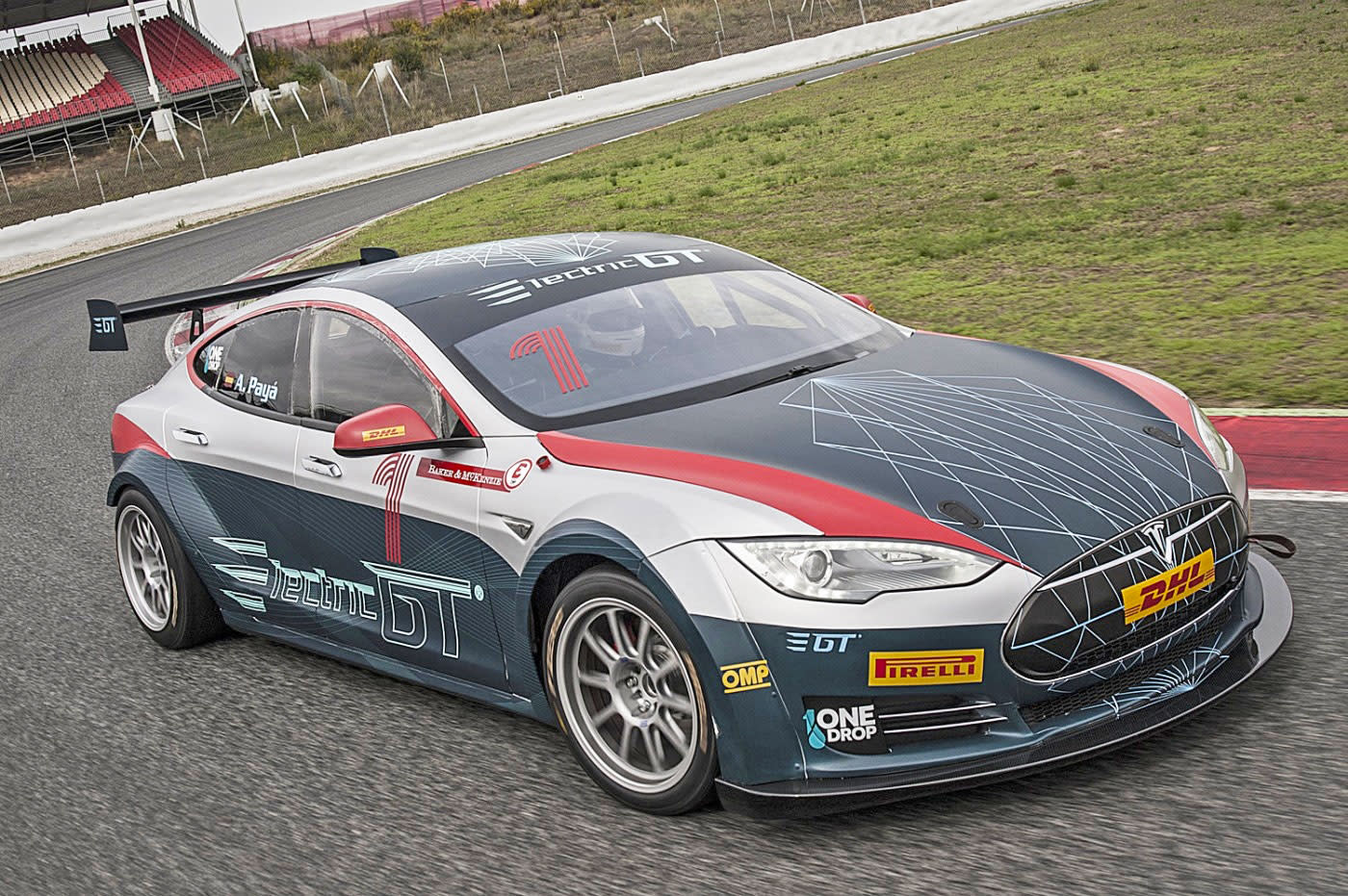 Two years ago, we learned that a Tesla Model S-based electric racing series was in development. This week Electric GT holdings showed off its first race-spec Model S P100DL in Barcelona ahead of the series' planned debut in November. Its builders say the EPCS V2.3 Tesla P100DL is more than just a standard P100D with Ludicrous mode, capable of going from 0 - 100 km/h in 2.1 seconds, which is three tenths faster than the production car, and speeds up to 250 kph.

The improvement comes thanks to Pirelli P Zero wet/dry tires, and a race weight that's lighter by 500kg with carbon fiber body panels and a roll cage. There's a double steel wishbone suspension up front, a new front splitter / rear wing setup for more downforce plus upgraded suspension and race brakes to keep everything under control on the track. With the 100 kWh battery on board, Electric GT expects its cars to complete 90 km on a single charge.

When the season starts, drivers will compete in identically-prepared sedans, and according to Motorsport.com, Electric GT CEO Mark Gemmell said each one costs "a bit less than 300,000 euros" ($350k). The racing series also announced a sponsor, Spanish esports league VP (League of Videogame Professionals, by Mediapro), and posted a virtual version of the car for the Assetto Corsa sim.

A 10 race first season will wrap up in October 2019 at Vallelunga, Italy. Once it launches, Electric GT will join Formula E as a racing series seeking to not only embrace competition but also increase awareness and acceptance of electric vehicles as they ride quietly around the track at high speed.

Take a tour of the #EPCSeries car before she hits the track for the first time today#AgeOfLight pic.twitter.com/N128dlnzzp

And there she goes!
The first race-ready #EPCSeries car has hit the track for the first time!
And @Circuitcat_cat has laid on a beautiful day for it!#AgeOfLight pic.twitter.com/MEljgVB3xr

In this article: electricgt, ElectricVehicle, ev, gear, models, racing, tesla, transportation
All products recommended by Engadget are selected by our editorial team, independent of our parent company. Some of our stories include affiliate links. If you buy something through one of these links, we may earn an affiliate commission.