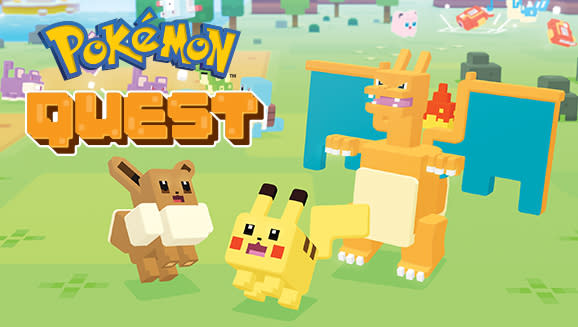 Pokémon Quest, a free-to-start RPG, was released for the Nintendo Switch back in May. Now, the game is available for both iOS and Android devices as well. You can download it from the App Store or the Google Play Store today, depending on your device.

The block-style game, which was developed by GAME FREAK Inc., takes place on Tumblecube Island. Your first step is to pick a partner Pokémon based on whatever attributes are important to you, after which you'll embark on expeditions to explore the island and seek hidden treasure.

The Pokémon franchise has been incredibly active of late; two new installments are coming to the Nintendo Switch this fall that will link the series' RPG roots with the extremely popular Pokémon Go. These are called Pokémon: Let's Go Pikachu! and Pokémon: Let's Go Evee!, and they will support multiplayer. You will also be able to buy a physical Poké Ball that works as a motion controller for the game.

In this article: android, apple, gaming, google, ios, mobile, pokemonquest
All products recommended by Engadget are selected by our editorial team, independent of our parent company. Some of our stories include affiliate links. If you buy something through one of these links, we may earn an affiliate commission.