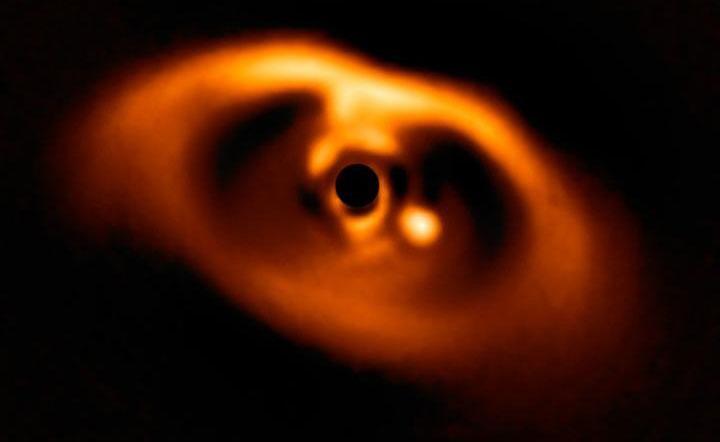 Thanks to European Southern Observatory's (ESO) Very Large Telescope, a group of astronomers have taken the first photograph of a planet being formed around a young dwarf star called PDS 70. The planet has been named PDS 70b. You can clearly see the newly forming planet, which is the bright spot to the right of the black dot in the middle of the picture. The black area is the star, which has been blotted out with a coronagraph. This allows astronomers to see details that would otherwise be overwhelmed by the light of PDS 70b.

The distance between the newly forming planet and its host star is about 3 billion km (somewhere in the neighborhood of 1.8 billion miles). That's about the distance between Uranus and our Sun. PDS 70b appears to be a gas giant, with a larger mass than Jupiter. The surface temperature is currently a steamy 1000 degrees Celsius (1832 degrees F).

Astronomers have seen these discs of planet-forming materials surrounding young stars before, but the young planets have always just been a part of the disc. This is the first time they've actually been able to detect a separate baby planet.

Not only is this a spectacular photograph, but scientists are able to learn a little more about planetary formation from it. For centuries, scientists have speculated about the nature of the transition disc, which is the ring of protoplanetary material with the hole in the center. The theory was that it was created by the interaction between the formation of a new planet and the disc itself. Now, scientists can see it happening for themselves, thanks to the discovery of this planet and this photograph.

In this article: eso, space, tomorrow, verylargetelescope
All products recommended by Engadget are selected by our editorial team, independent of our parent company. Some of our stories include affiliate links. If you buy something through one of these links, we may earn an affiliate commission.