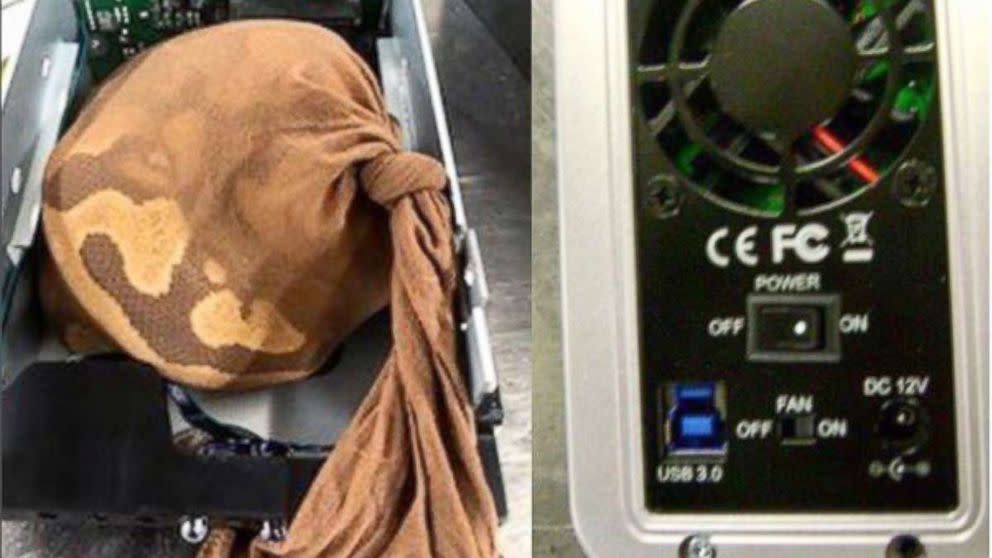 Transport Security Administration (TSA) officials have intercepted a traveler at Miami International Airport who planned to illegally smuggle a snake en route to Barbados. The female passenger was prevented from boarding the flight after security agents discovered a Ball python was concealed within an external hard drive in her possession. To make matters even more bizarre, the snake was dressed in a nylon stocking.

While the snake didn't pose a serious risk -- ball pythons are a nonvenomous, placid species -- it could have caused a major stir amongst unsuspecting passengers. The TSA was also concerned about the ramifications "an organic item concealed inside electronics" posed for airport security. The U.S. Fish & Wildlife Service has since retrieved the snake and the would-be snake smuggler has been fined for her misconduct.

If you thought this was the first attempt to stow away wildlife on Miami planes, you'd be wrong. The Miami Herald reports that in 2011, a man tried to clear the checkpoint area with both snakes and turtles strapped to his body, and a woman stashed a snake in her bra the next year hoping to board her plane.

In this article: airportsecurity, gear, hiss, miami, miamiinternationalairport, python, security, snake
All products recommended by Engadget are selected by our editorial team, independent of our parent company. Some of our stories include affiliate links. If you buy something through one of these links, we may earn an affiliate commission.