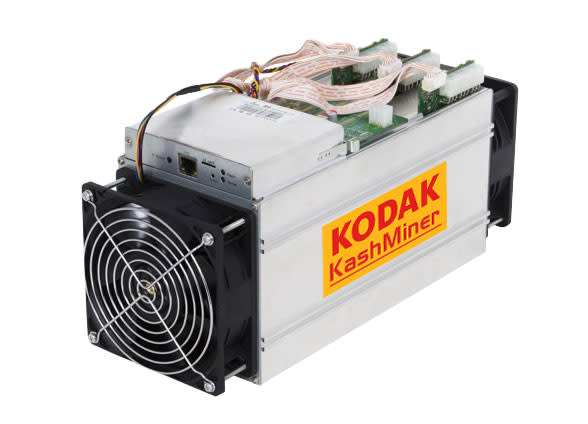 One of the more surprising gadgets to appear at CES this year was a Kodak-branded cryptocurrency mining computer, which might have seemed like an easy way to make money if you leased the machine. But economists said the math never added up, and the proposed profits were nigh-on impossible. Spotlite, the company behind the plan, now says it will not move forward with leasing the machines. CEO Halston Mikail told the BBC that the Securities and Exchange Commission had blocked the scheme.

Spotlite planned to lease the bitcoin-focused Kodak KashMiner (and rigs dedicated to other cryptocurrencies) for $3,400 for two years, and it would give you half of the currency the machine generates while pocketing the rest. In its marketing, Spotlite said the computer (essentially a third-party device with a sticker slapped on the side) would generate a value of $375 per month, or a total of $9,000 over the two years, given an average bitcoin price of $14,000. Yet that overlooks how bitcoin fundamentally works, in that mining the coin becomes more difficult and time-consuming as more of the currency is generated, and disregards the wildly fluctuating market.

An economics professor said the price of bitcoin would need to hover at around $28,000 to deliver Spotlite's suggested level of return; the current value is $6,597, or less than a quarter of that mark. Bitcoin's all-time high was $19,783, which it hit in December, and it has only nudged above $14,000 for a few weeks in December and January. So, actually netting a solid return from the Kodak KashMiner seemed highly improbable.

Spotlite had planned to store the machines at Kodak's headquarters in Rochester, New York, to take advantage of low-cost electricity there. The goal was to have hundreds of machines in place, and Mikail had said his firm already had 80 up and running there. However, Kodak told the BBC the devices were never installed at its office. The company also claims that the computer was never officially licensed, though it's not clear whether it took any legal action over the branding.

Mikail says Spotlite's new plan is to run the mining operation privately, and it will install the rigs in Iceland. Maybe Spotlite will follow through this time. It never even finished the KashMiner website -- the terms and conditions and privacy policy pages are full of lorum ipsum filler text.

In this article: bitcoin, bitcoinminer, cryptocurrency, gadgetry, gadgets, gear, kodak, miningrig, scam
All products recommended by Engadget are selected by our editorial team, independent of our parent company. Some of our stories include affiliate links. If you buy something through one of these links, we may earn an affiliate commission.