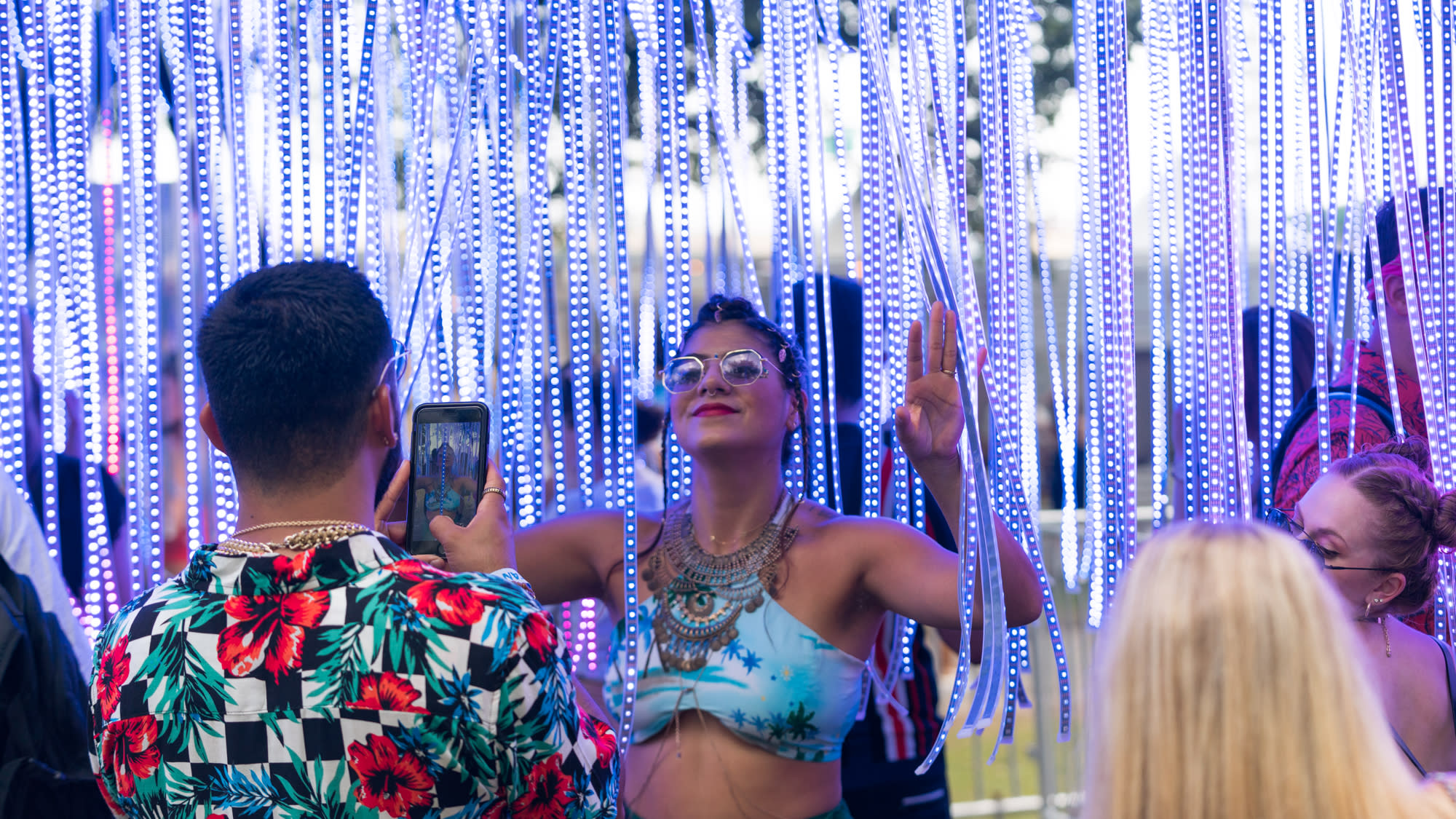 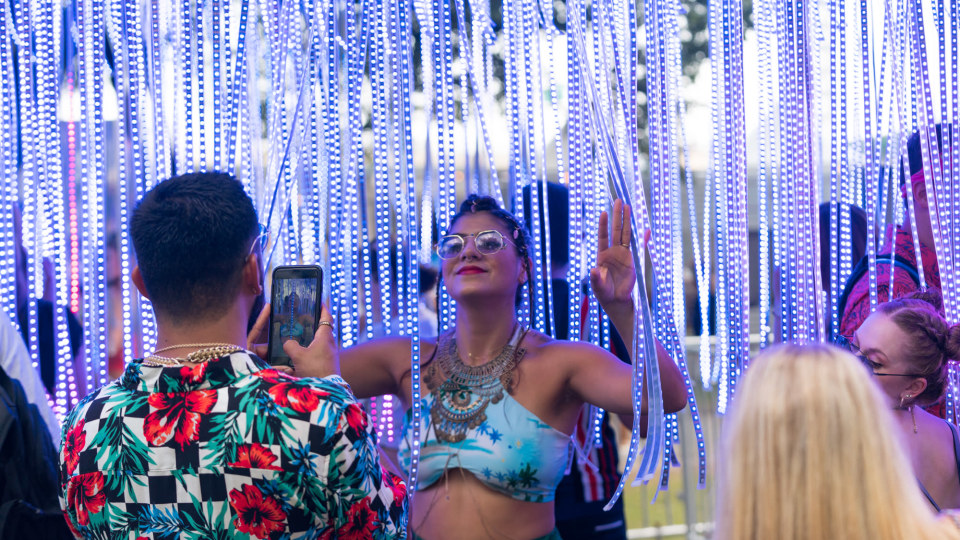 Three years ago, when Panorama debuted in New York, it featured a tech-infused art exhibit area in addition to its musical lineup. I wondered: Who would go to a music festival to check out VR art or light installations? The obvious answer is that people don't go to music festivals to look at installations; they stop by the exhibits to pass time between acts. This isn't Burning Man, where art is as much a part of the experience as living in the middle of nowhere for days. The Lab, as this tech-meets-art zone is called, is more like a benign growth -- it doesn't hamper the experience, but isn't a must-see either. It's like an adrenaline-free theme park with just as much standing in line and waiting around.

Over the years, though, The Lab's creators have learned how to better cater to its captive audience. Cut down the wait time, give out useful swag and most of all, make everything Instagram-worthy.

This year's artists took that last lesson seriously. From the colorful, giant balloons housing wireless LEDs in Pixel Vortex to the reptilian laser projections on visitors' faces in Visage, each installation is prime for photo opps. In Pixel Vortex, for example, I walked into a tall, round room filled with huge glowing balloons propelled by powerful fans on the floor. I took a few photos and wondered if that was it. After about a minute of throwing them around and marveling at the pretty hues that changed seemingly randomly, I was taken to a window outside the room with a 3D camera over it. There, I laid my hands on pin-cushion-like galvanic skin-response sensors while looking up at the camera, and the system captured my "aura." A few seconds later, the balls inside the room lit up in corresponding colors. And I walked away with a portrait of my aura that was so pretty I had to share it on Instagram.

Me getting my aura taken at #Panorama. Swipe for results. You have to touch something under a table. It's cool.

Instead of arranging everything in a linear order under one massive tent, The Lab's curator, Justin Bolognino, and his team decided to split up the individual exhibits this year to shorten wait times. He told Engadget it created more of a "choose your own adventure" vibe than before. The freedom to roam the area in any order was nice, but I missed the air-conditioned waiting area from last year. It probably would also have come in handy when it started to pour Friday afternoon.

A crucial difference this year was the fact that The Lab actually had a theme: "Fractal nature." According to Bolognino, it's about understanding that "space and time really are just what you want them to be," but it also aims to remind the audience of the importance of sustainability. Having a theme gives all the installations a sense of cohesion, no matter how different and unrelated they all seem. For example, Pixel Vortex creator Jon Morris told Engadget that his work was inspired by his experience swimming with bioluminescence in Puerto Rico, and he wanted to re-create it for people. Meanwhile, the eye-catching light installation Infinite Wild was made from sustainable, recyclable or reusable materials and powered by a mix of grid and solar energy. That's no easy feat with tech-related works, according to artist Dave Sheinkopf. A bunch of lights and computers might not immediately evoke the idea of sustainability, which might explain why there are signs in front of each exhibit.

My favorite part of The Lab was HP's lounge, which had its own theme -- "Digital Eden." The cool, air-conditioned tent was dripping with flowers, both motorized and real, which made for a gorgeous spectacle. Visitors could control the dozen or so mechanical flowers at the Bloom Art station by choosing the colors of the buds and petals. You could also design and print your own water-bottle wrap at the Hydration Art station, and HP stuck them onto water bottles attendees could fill up at the fountains next to the station. At the Light Art booth, people posed for eight-second videos while using a light pen to draw virtual art around them.

For HP, the benefits of participating in the event are obvious. Emily Ketchen, HP's regional head of marketing for the Americas, told Engadget that not only do attendees' sentiments about the company improve after seeing its work at Panorama, but "from the social perspective, it's really, really good for us."

That's a no-brainer, of course. The barrage of social media posts featuring the HP logo is free publicity that easily reaches the company's target audience: millennials. But what's less obvious is that HP actually seems to be resonating with the artist community. In addition to providing all the equipment creators needed for their works, HP also helped artists achieve their visions. In demonstrating what's possible, the company also inspires those who want to dabble in tech-infused art.

Jonathan Zawada, the artist behind Visage, told Engadget that in working on the project with Intel and HP, realizing what was possible helped inspire 20 more ideas. "All I've been saying is I want to do it again, and do it better, and try this and that," he said. Zawada's first work with projection mapping was a light show on the Sydney Opera House and although he wasn't very interested in the tech at the start, he has since become more keen on it.

Perhaps the real reason for The Lab's existence isn't so much to educate its audience as it is to inspire curious artists. Imparting deeper messages isn't the goal here, but if viewers have fun in the process, it's a great side effect. For Bolognino, it's all about "taking cosmic themes and making it super fun," because at the end of the day, "that's what the kids want."

In this article: art, gadgetry, gadgets, hp, music, panorama, panorama2018
All products recommended by Engadget are selected by our editorial team, independent of our parent company. Some of our stories include affiliate links. If you buy something through one of these links, we may earn an affiliate commission.