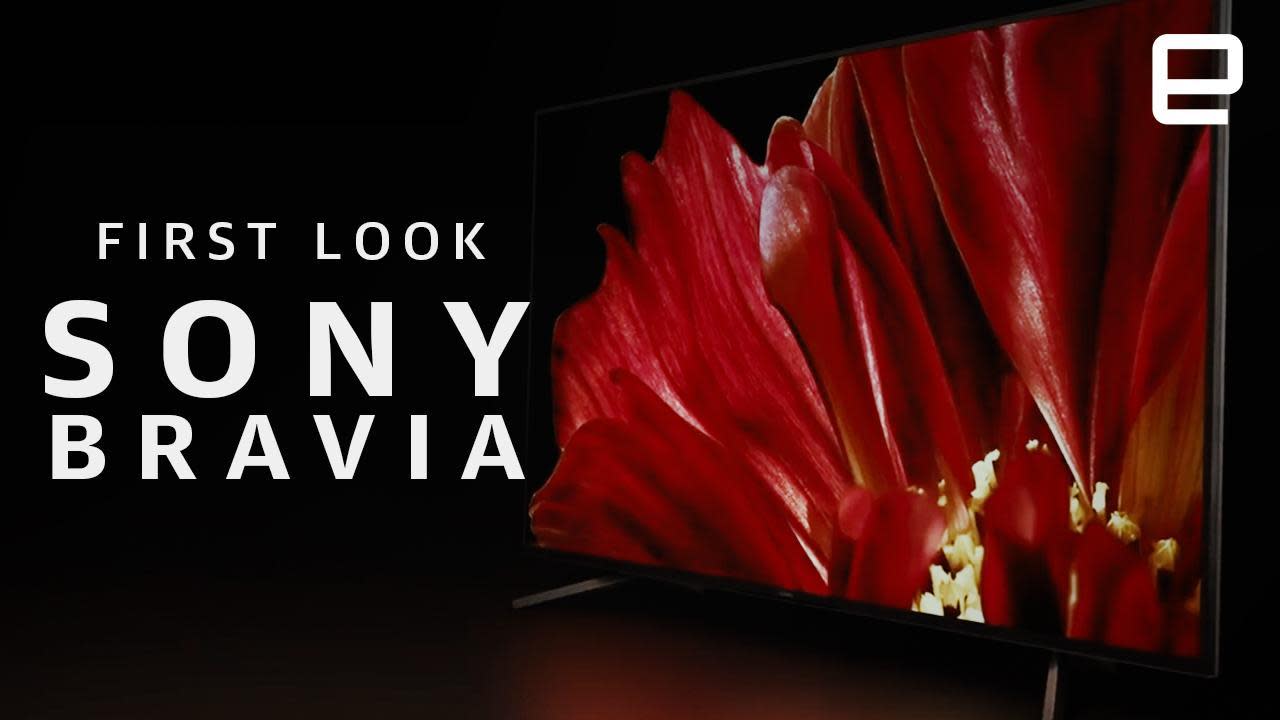 With its latest premium TVs, the Bravia Master Series, Sony has one goal: To bring home the experience of watching a professional-grade studio monitor. The OLED A9F and the LED-based Z9F sets are Sony's most advanced yet, thanks to the company's new X1 Ultimate image processor. At a launch event in New York today, I had a chance to check out the new sets. And while I can't say for sure how they resemble professional monitors, I can at least confirm that they look very good. But that's not a huge surprise, because Sony has been delivering solid 4K TVs for years. The star of the show, not surprisingly, is the A9F. The company's first Bravia OLED set wowed us in 2017, and the A8F, which launched earlier this year, looked even better for less money. But the A9F is an even bigger step forward. It features an upgraded version of Sony's Acoustic Surface technology, which turns the display into a giant speaker. Now it effectively recreates a 3.2 setup, thanks to the addition of a center actuator and another subwoofer channel. Unfortunately, I couldn't hear the speakers over the noise of Sony's launch party, but conceptually, they're a solid upgrade. In particular, it'll be useful for someone who wants decent sound without installing an additional soundbar or other speakers.

Overall, the A9F looks just as good as Sony's earlier OLEDs, with inky dark blacks and eye-searing contrast and peak brightness. The company added a few new features to improve image quality, like object-based HDR remastering and "super-resolution," but they're not very noticeable unless you're viewing the TVs side-by-side with the older models. Honestly, it's not as if Sony really had much to fix.

While my heart is set on OLED, the Z9F looks very impressive for an LED set. Most importantly, Sony fixed the dreaded off-angle viewing issue that plagues every LED TV, where colors appear more washed out as you move towards the sides. That's something that still affects Sony's previous high-end LED set, the X900F. The X-Motion Clarity feature in the Z9F is a holdover from that earlier model, and it helps to smooth out on-screen movement without making everything look like a soap opera (which is usually attributed to overzealous motion smoothing).

"We're never satisfied," Sony Electronics president Mike Fasulo said in an interview. "It amazes us at times -- we present a product that we think is never going to get any better, and then our engineers, working with the content creators, figure out ways to improve it. We're obsessed with that."

The company spent the past 18 months working on the new models, according to Fasulo. And when it comes to taking on Samsung's 146-inch MicroLED TV, he says Sony is already investing in large crystal LED (CLED) screens. Those are targeted at commercial users, but it's not hard to see how that could be scaled down for consumers eventually.

The Bravia Master Series sets are also the first TVs to feature Netflix's Calibrated Mode, which optimizes the picture settings for shows and movies from the streaming service. Based on a few short clips from Lost in Space, the new mode appears to deliver a more-accurate image. And given that most consumers don't spend much time calibrating their new TVs, it seems wise for Netflix to offer a one-click option for better quality. (Thankfully, Netflix's settings also avoid the soap-opera effect.)

In this article: av, entertainment, gear, sony
All products recommended by Engadget are selected by our editorial team, independent of our parent company. Some of our stories include affiliate links. If you buy something through one of these links, we may earn an affiliate commission.