Raising a child in the final season of Telltale's 'Walking Dead'

When we we first met Clementine in Telltale's The Walking Dead, she was a scared eight-year old hiding in her tree house from the zombie hordes. Over time, she learned how to shoot, scavenge and survive as the world crumbled around her. Mostly, that was due to her great mentor: Lee, the first season's ex-convict lead. Now in The Walking Dead's final season, Clementine is a teenager with a young charge of her own. It's her job to keep him alive -- but also, to make sure he grows up properly. Welcome to parenthood in the zombie apocalypse.

AJ is a sweet and quiet kid. He does what he's told. But he could take a bite out of your arm if you surprise him, and he's a crack shot with a revolver. He's not your typical rugrat. He appears to be younger than Clementine was at the start of the series, and he has no knowledge of the pre-apocalypse world. So it's up to you, as Clem, to teach him right from wrong; how to cooperate with other people; and crucially, how to trust anyone in a lawless world.

The first episode of The Walking Dead's final season, which comes out today, has everything you'd expect in the series: Tense zombie encounters; humans struggling to survive against all odds; and crucial player choices. But the relationship between Clementine and AJ is its heart and soul, mirroring her dynamic with Lee. AJ hangs on your every word, and your decisions shape him as a person. Even a seemingly innocent bit of advice could have dangerous repercussions in the future. Just like parenting in real life (something I'm gearing up for myself), you'll never know how, exactly, your behavior will influence your child. 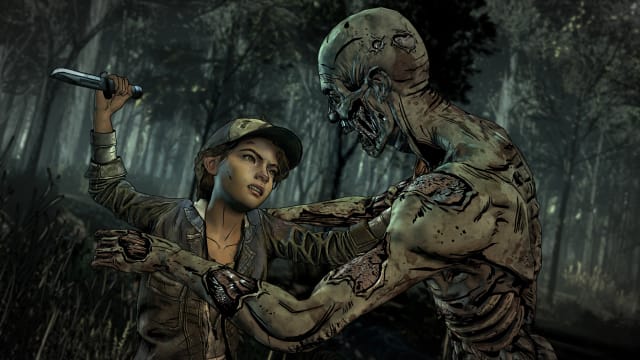 While it's hard to judge an entire season based on a single episode, so far this entry feels close to Telltale's first season of The Walking Dead, which was a revelation. It was an almost perfect combination of solid writing, meaningful narrative choices and great characters. It put the developer on the map, and revived the nascent genre of adventure games (we wouldn't have Life is Strange without it). But since then, Telltale spread itself thin across a swath of popular properties -- Fables, Game of Thrones, Minecraft, Borderlands, Batman -- all the while struggling to recapture the magic of The Walking Dead's first season. (The company was so overwhelmed it delayed the second season of The Wolf Among Us to 2019 -- five years after the first ended.)

Now, though, Telltale is leaner and more focused. It's just unfortunate it took laying off a quarter of its staff last year to reach this point. As the developer told us, it's aiming to end The Walking Dead on a high note. That starts by going back to basics, with a more Clementine-focused story. But this final season is also a chance for Telltale to show us how much it's learned over the years. 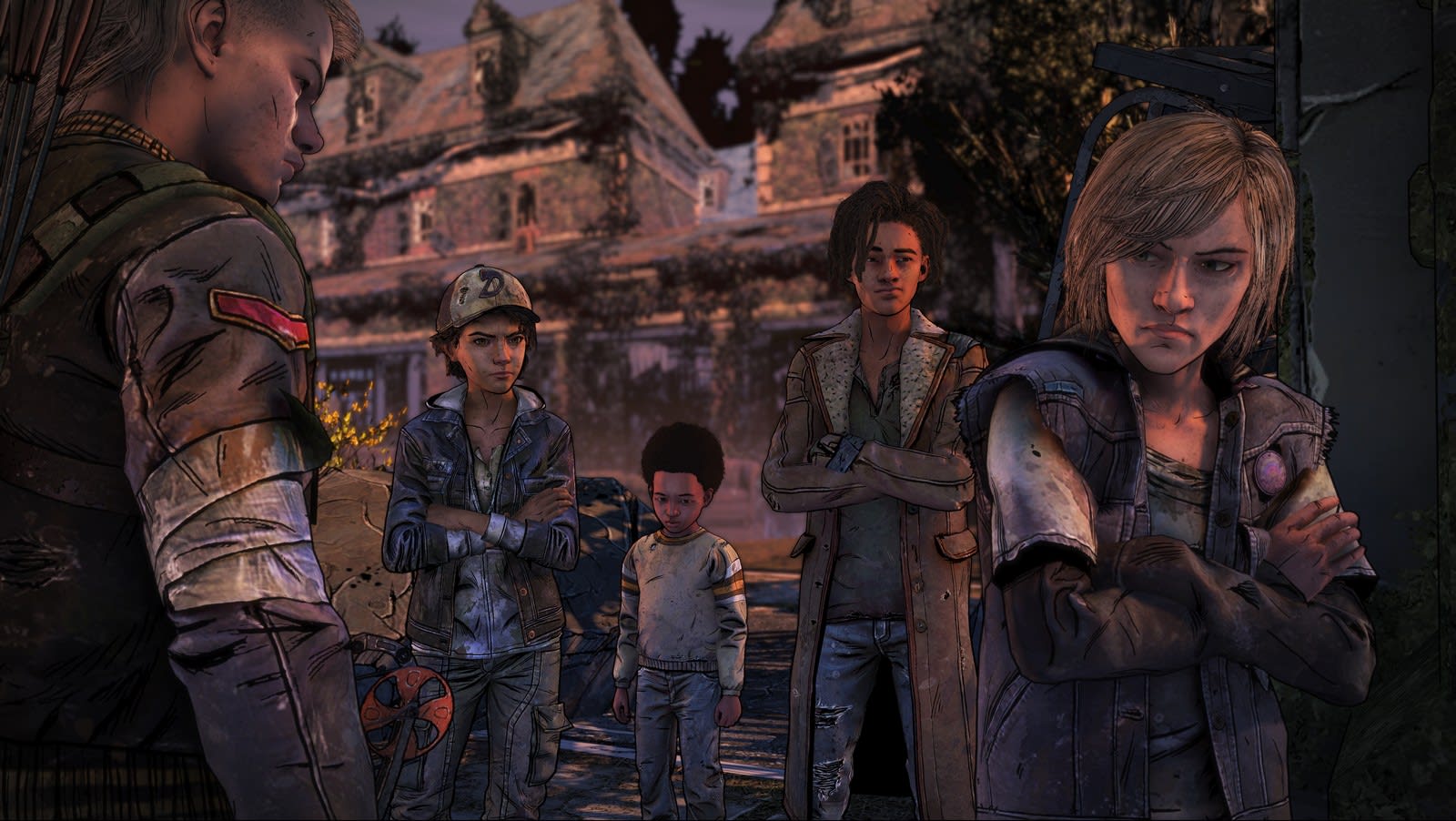 For one, its engine has vastly improved. The game runs at a steady 60 frames per second on my Xbox One X in 4K/HDR, with no signs of slowdown or stuttering. That's exemplified by a more fluid camera system, which can move around the environment without waiting for load times. In earlier Telltale games, there was often a jerky cut between different camera angles. The refined "graphic black" art style is also a wonderful aesthetic upgrade -- it's much more detailed than before, and it evokes the grittier look of the comic. With all of these tweaks, the Walking Dead world and characters feel more alive than ever. Ironic, I know.

Combat in the game also involves more than just hitting buttons at the right moment. For the first time, Telltale developed unscripted action elements, where you're free to walk around and choose how you attack an enemy (either by stunning it or killing it outright). Sure, the combat doesn't have the precision of God of War, but it feels more interactive than a mere quick time event. I found myself dying much more in this first episode than I ever did in a Telltale game, but getting through a tough section also felt more rewarding. 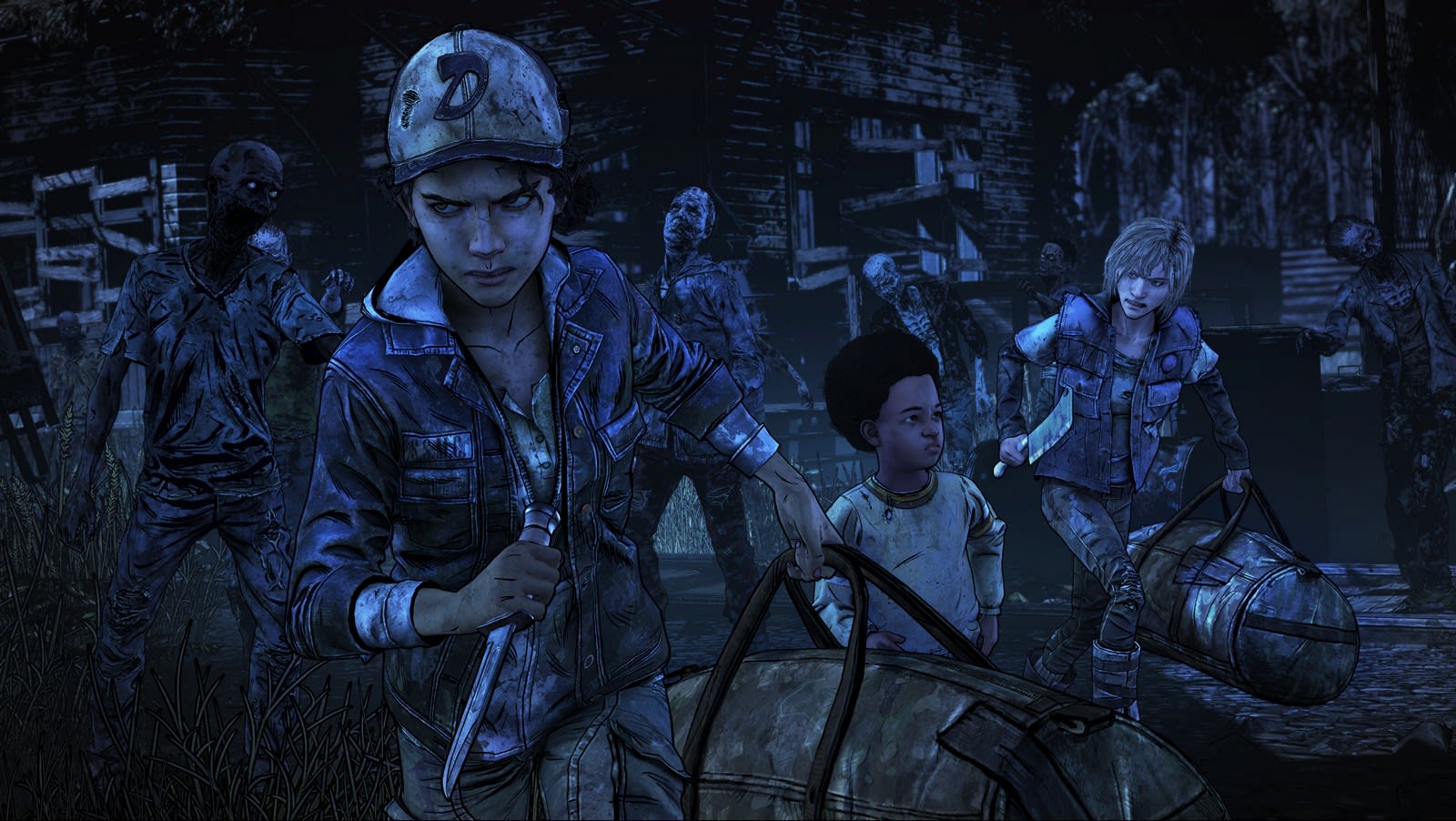 It's not spoiling too much to say that Clementine and AJ eventually find themselves in the midst of a new community, one entirely run by teenagers and kids. It's the closest thing to a sanctuary that they've seen in years. And for AJ, it involves learning new things, like the joys of sleeping on a soft bed. (If you make him try it, of course.) There aren't many echoes of Lord of the Flies, just kids doing their best to scrape by, free from adult drama.

I won't reveal any of the major choices I made, but so far they feel more satisfying than the last few seasons of The Walking Dead. They mean much more, since they revolve directly around Clementine and AJ's survival. If you're playing with all the choices you've made in the series since 2012 (Telltale makes it very easy to import saves), you'll want nothing more than to fight for Clem. And like any parent, I just want her to be happy. For once, in the brutal and nihilistic world of The Walking Dead, that seems possible.