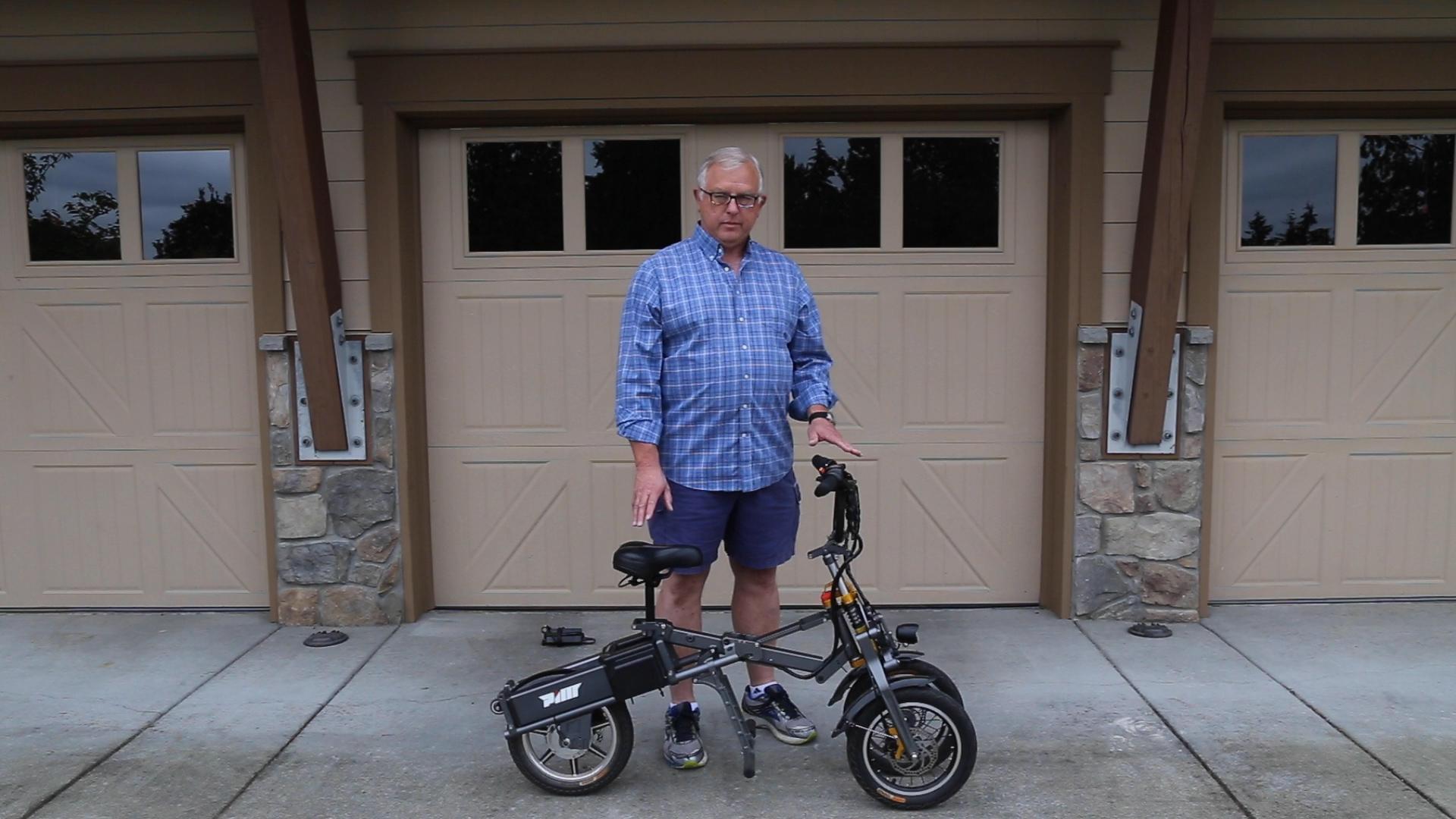 SEATTLE — "You look like a circus bear." That's the kind of snarky assessment only one's own teenager can deliver, but it summed up my last time on an electric "mobility device," commuting to work on Autoblog's Urb-E scooter: Big guy, tiny vehicle, cue the circus music. Now, after loading a more-substantial Mylo electric scooter into my car for a week of testing, I've gotten stuck in traffic on the surface streets of Seattle, where things are backed up on a sunny summer Saturday because, hey, why should Saturday be different than every other day? Going nowhere fast, it's hard to resist the urge to unfold the Mylo, abandon the car where it sits, and make my escape from the circus we call modern life.

The frustration with urban traffic, or rather the need for alternatives, is one reason why a wave of battery-electric conveyances are already on the market or headed our way, from the Bird and Lime scooters that are cluttering the streets of Southern California, to dozens of models of electric bicycles, to Vespas, right on up to electric Harleys. 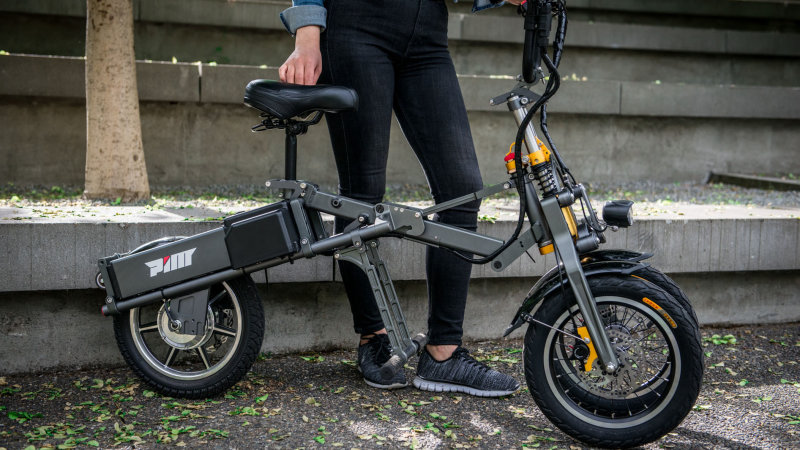 Mylo first caught our eye a couple of months ago when its maker, PIM Bicycles in Seattle, was running an Indiegogo campaign. And it's eye-catching because of its unusual design, with two wheels in front, one in back. Though let's make this clear at the outset: Three wheels do not a trike make. The configuration does not eliminate the need to balance Mylo like a bicycle — the front wheels are just too close-set. PIM brand manager Justin Hopkins says a lot of potential buyers, perhaps people who are older or disabled, have inquired about Mylo because they have trouble balancing a two-wheeler. Hopkins wants to be clear that's one problem Mylo can't solve.

Instead, the strength of the three-wheel design comes, not when you're riding Mylo, but when you've gotten off it. First, flick a switch that locks the front fork, and the two wheels up front eliminate the need for a kickstand. Then pull a small release lever behind the seat, and in one second, Mylo folds like a piece of origami. The 14-inch front and rear wheels nestle together. The seat tucks between the handlebars, and the whole folded affair stands on its own, stable and upright. And with a gentle push, you can wheel it away. 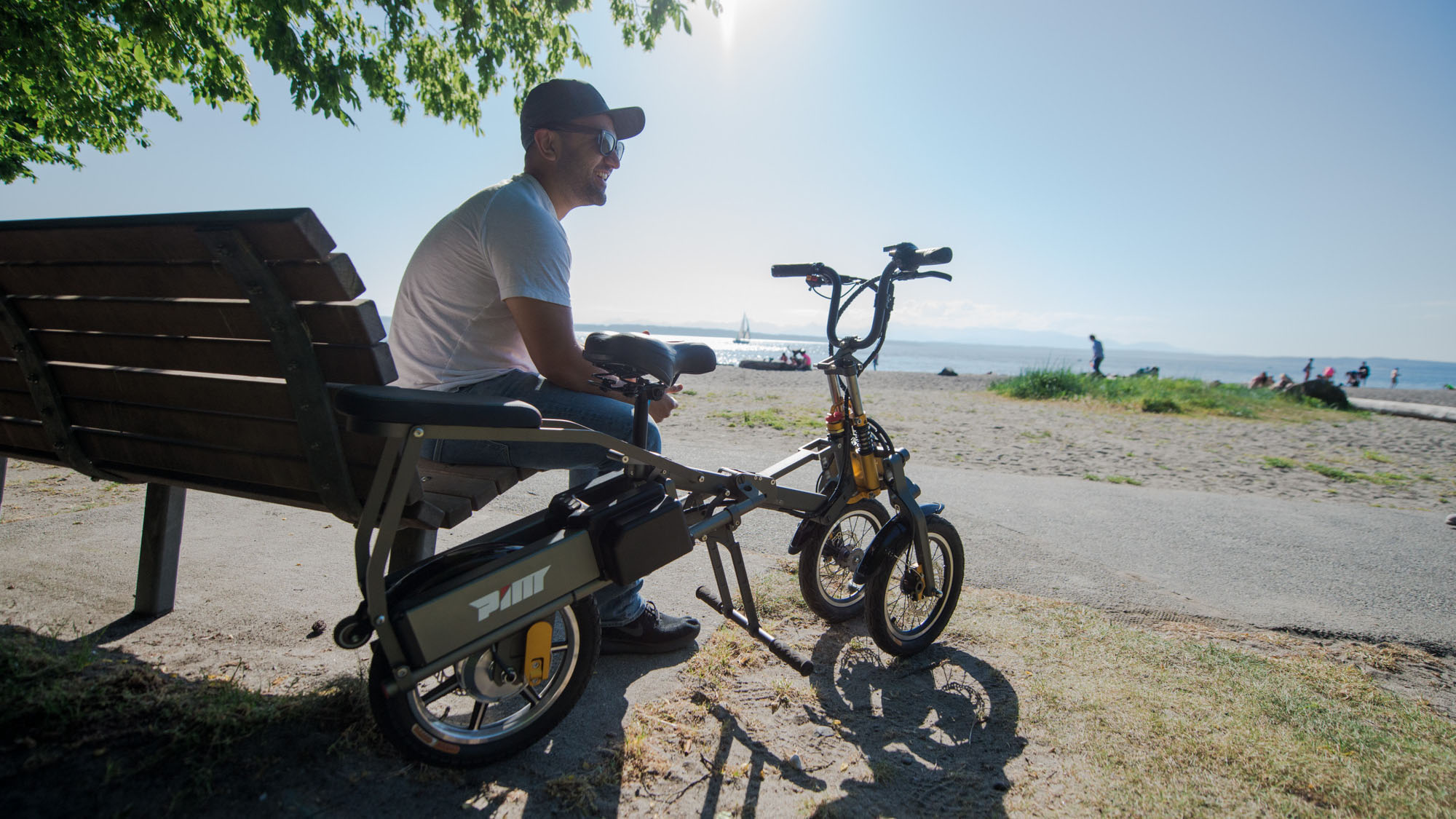 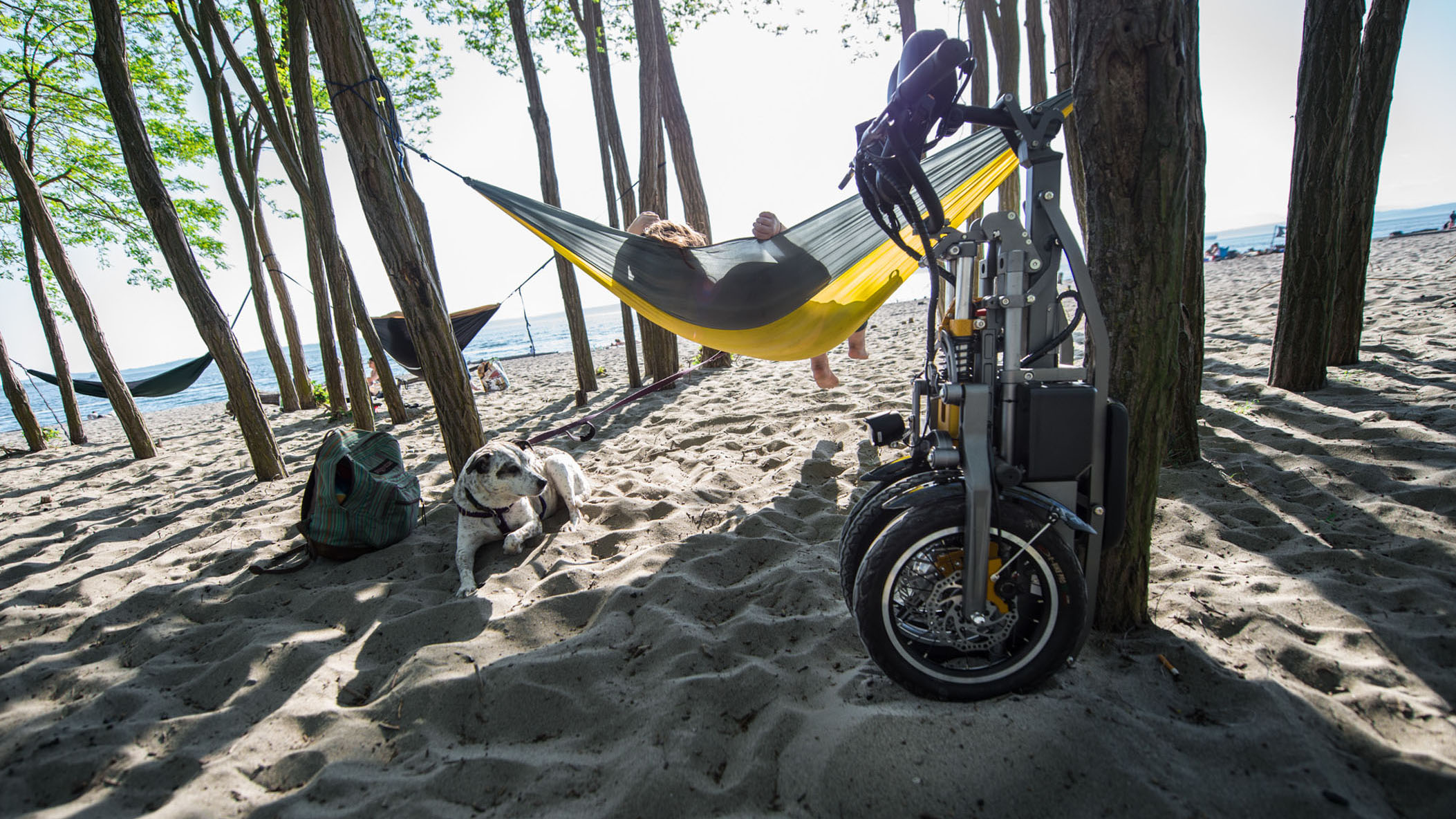 When folded, Mylo could fit just about anywhere, at a collapsed size of 15 inches by 20 inches by 41 inches tall — that's a bit bigger than a folded Urb-E, but without that device's riding tradeoffs. You could roll Mylo down the aisle of a not-too-crowded city bus. Or ride it a few miles into a downtown, fold it at the front door of your office building, then tuck it into a corner of your cubicle — no more traffic hassles, fuel costs or parking fees. It can scoot you across a big factory floor, corporate campus or university. And remember the opening of "The Jetsons," when George ejects Elroy, Judy and Jane in separate little pods? You could keep Mylo in the car for when you need to peel off in a different direction from your spouse or carpool buddy. It lifts in and out of the trunk easily enough at 46 pounds.

PIM's Hopkins says one of the biggest potential markets for Mylo is the RV community. Instead of hanging bikes on the back of your rig — heavy bikes, in the case of electrics — where they're hard to hoist and easy to steal, a Mylo or two would tuck nicely into the basement storage compartments. 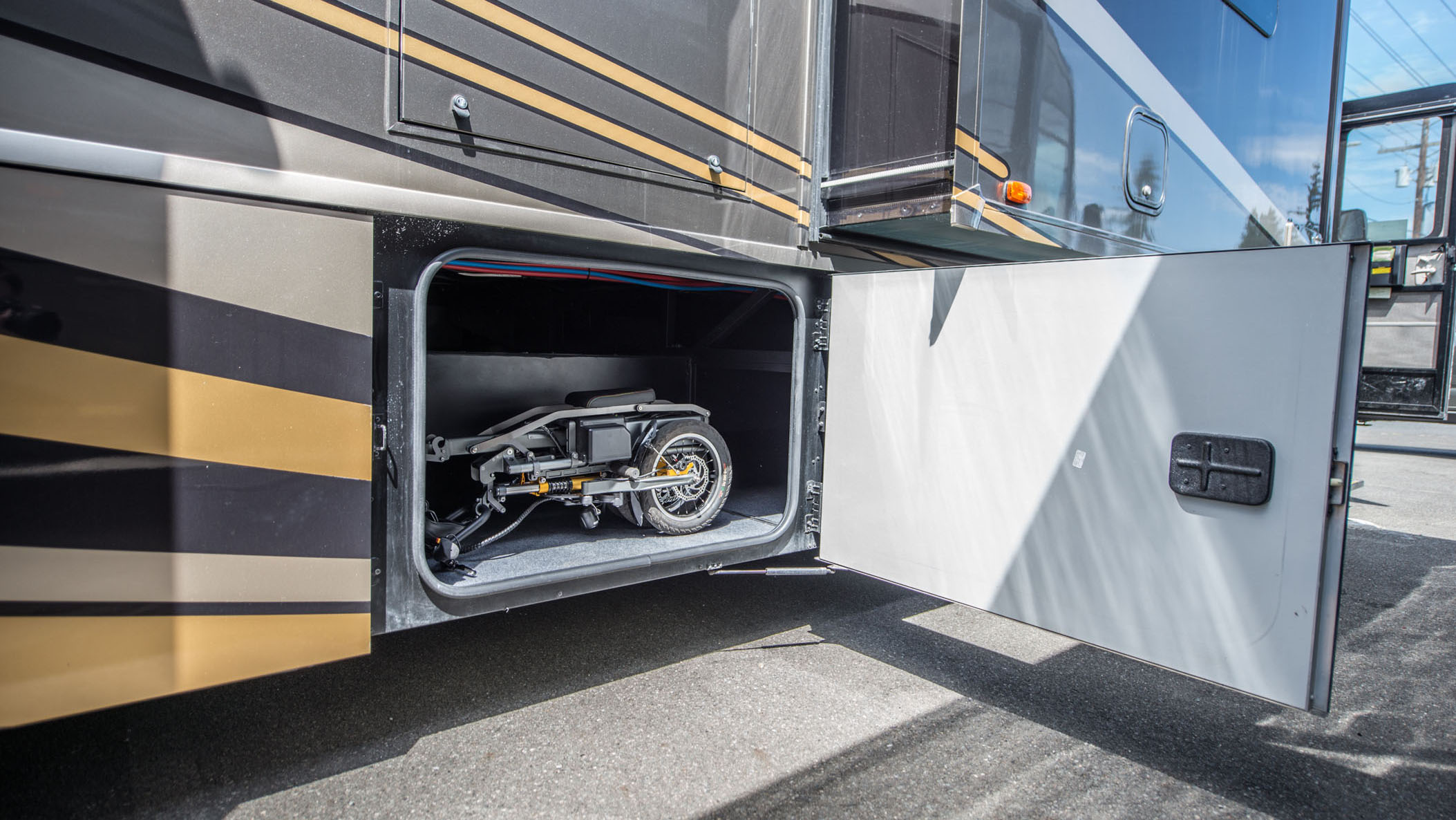 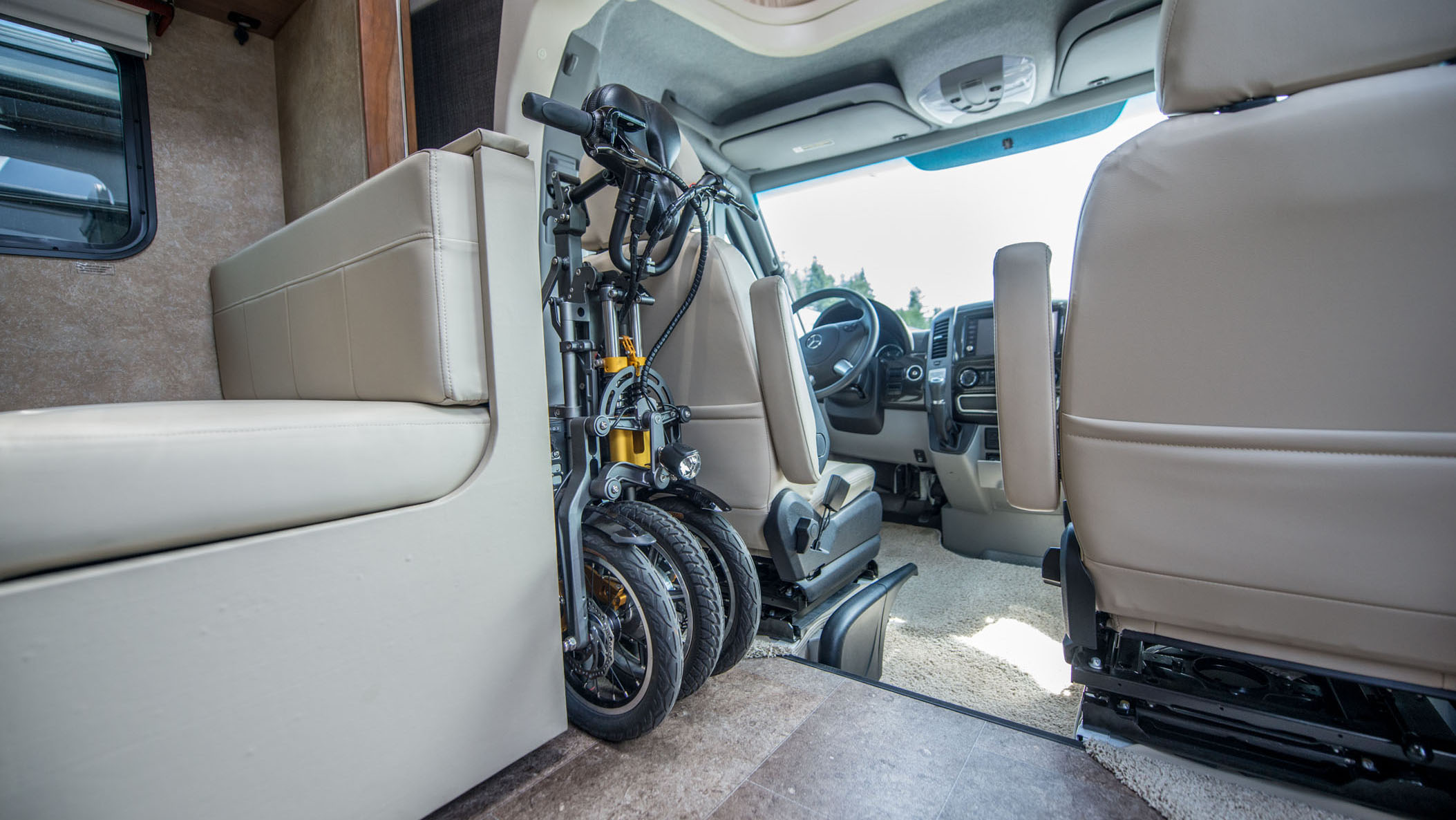 So, that's Mylo when you're not riding it. How is it when you're aboard? It's functional, practical and fun. Unlike an electric bicycle, there is no pedal assist. Your feet rest on pegs. And unlike an Urb-E, it's more comfortable to ride, with a longer wheelbase, an actual suspension, inflated tires, and handlebars that aren't directly over the front wheels. Mylo has three speed settings, which are really speed ranges rather than gears. The throttle is activated by your right thumb, and like the Urb-E's twist-grip throttle, it can be a little tiresome to operate over a long ride. Brakes are hydraulic disc, with 145mm rotors in front and a 160mm rotor in back — on this prototype, the brake levers were set up backwards for the Asian market, but Mylos for the American market will have the rear brake on the right hand. The finished product will also have a tidier cosmetic wrap on the brake lines, and down the line they might add a lift handle that would be helpful.

On neighborhood rides, it was easy to get Mylo close to its top speed of 17-18 mph on level ground. On a trip down and then up a hill with 400 feet of elevation, minding the brakes downhill was important. Unlike on a bicycle, you can't fully coast to capitalize on gravity, because Mylo gets pretty twitchy by about 25 mph. (Which still beats the Urb-E, which is twitchy at any speed and demands constant attention to the road ahead.)

On the trip back uphill, Mylo struggled a bit, bogging down to just a few mph on the toughest inclines, but it never gave up. Mylo is rated for riders up to 275 pounds, but obviously the lighter you are, the less burden you'll pose to the 250-watt motor.

Flatlands and gradual grades are where Mylo shines. On an outing to test its 36-volt, 374-Wh lithium ion battery's stated range of 15 miles, we rode the Sammamish River bike trail, where it easily kept pace with casual riders and was passed by only the most garishly Spandexed of the hardcores. Technically speaking, a motorized vehicle is not supposed to be on the trail ... though, hmm, does that pertain to electric motors? Where and when personal electrics will be allowed to ride — sidewalks, streets, paths — is a big question facing cities as these vehicles become more popular. But on this ride, the bicyclists seemed welcoming. Mylo elicited smiles, either because riders thought it was nifty, or because they too were enjoying the circus act. 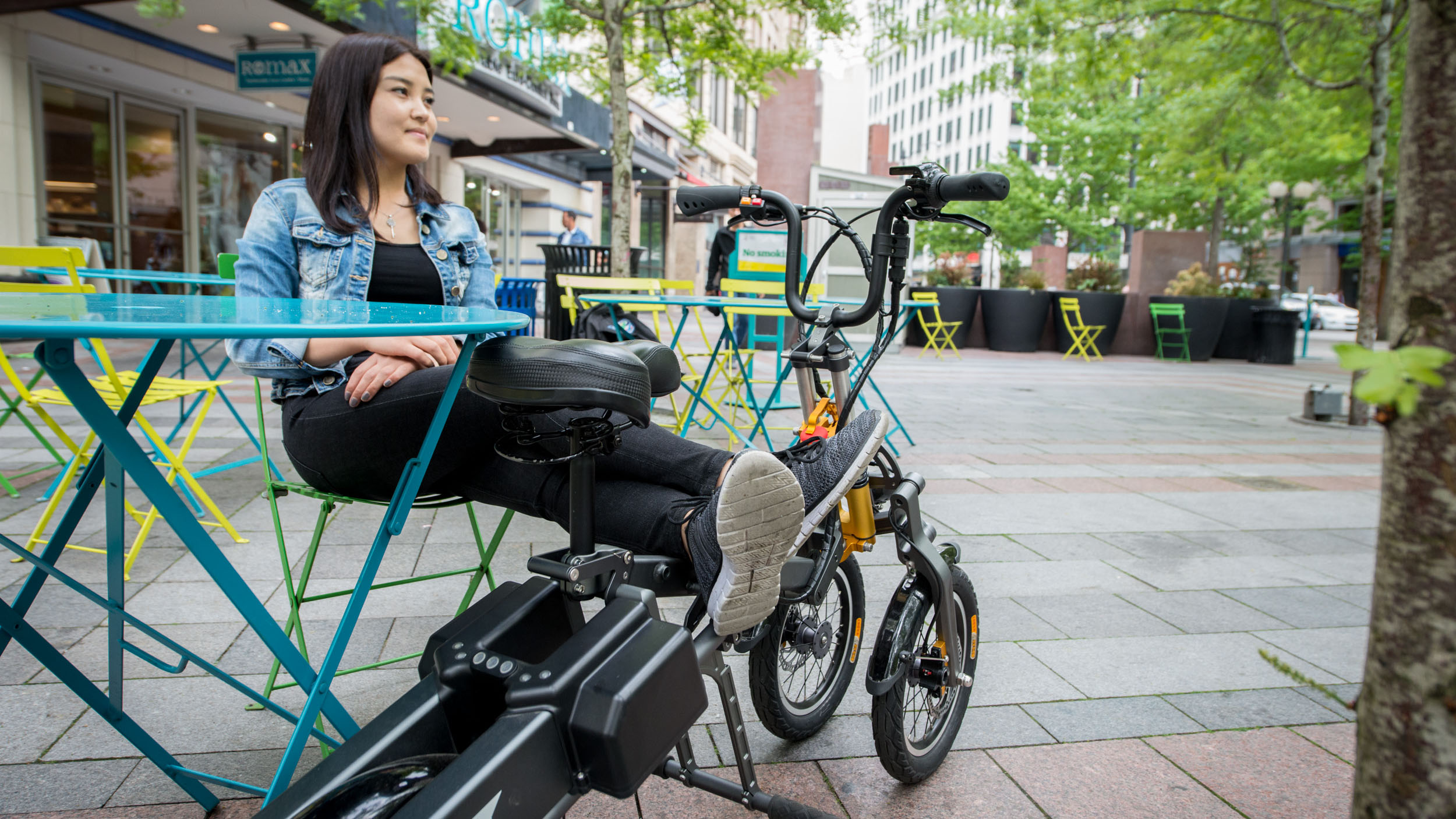 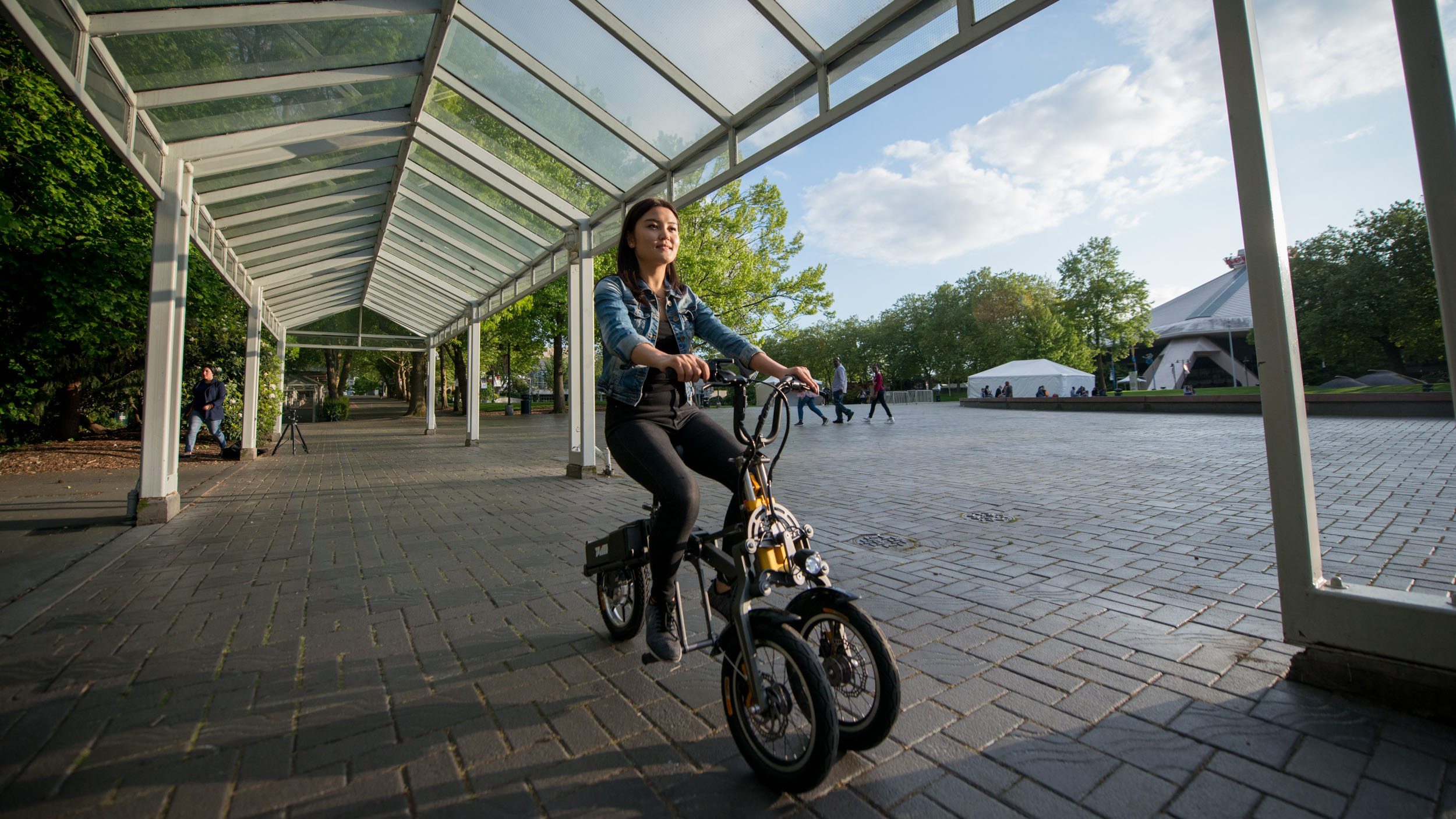 Mylo's endurance was great. Endurance of my backside, not so much. Allowing for a margin of error, I did an out-and-back totaling 14 miles, and there was plenty of battery left. Mylo has a small trip computer that shows miles elapsed and battery life remaining. It's also equipped with front and rear lights, a horn, fenders, and a second battery compartment in case you want to double the range. The single battery should be plenty, however, as, just like on a regular bike, your rump takes a beating. Though Mylo's more comfortable than the bone-jarring Urb-E, doing 14 miles in one sitting was a bit much. If your commute is 4-5 miles, however, it would be painless. A taller post might make the seating position more comfortable, but then the seat wouldn't tuck in quite as nicely when folded.

That said, Mylo's suspension absorbed rough pavement to a tolerable degree, about like a bicycle with a suspension fork and better than those lacking one. It even gamely tackled a detour onto a gravel path. That was a rough ride, but the scooter barely lost speed.

PIM Bicycles' parent company, Hong Kong-based SunLuxe International, has 3,000 employees and produces a wide array of power devices, so Mylo isn't some Frankenstein bolted together in the back of a bike shop — it's backed by 20 years of engineering and manufacturing experience, and looks it.

Mylo retails for $1,495. That might seem expensive for a cute little thing, but it would seem that PIM has the price triangulated. Electric bicycles aren't cheap, either, and they are hard to store and easy to get stolen. Some old-fashioned human-powered bikes are much cheaper, but you arrive at work sweaty and might have a harder time being accepted on sidewalks. RVers have already invested a lot more money than this in their travels. And if you're a commuter able to save hundreds of dollars a month in downtown parking, you'd recoup the cost in a few months — and help solve the growing problem of car congestion in the urban core while doing it. Yes, riding a bus is cheaper, and if that's your thing, go for it.

Mylo has a one-year warranty, and PIM promises plenty of friendly customer support. Add-ons include a second battery, though again, a 30-mile ride would exceed the limits of the human keister, and recharging on the go is simple with its compact laptop-type charger. The only other option is a rear rack/seat to accommodate a briefcase, cargo, or even a petite passenger.

PIM is currently building out a distribution network for Mylo, at places as diverse as RV dealers and bike shops, and is building up its U.S. inventory as we speak. And of course Mylo can be bought directly at PIM's Seattle store or its Mylo website. 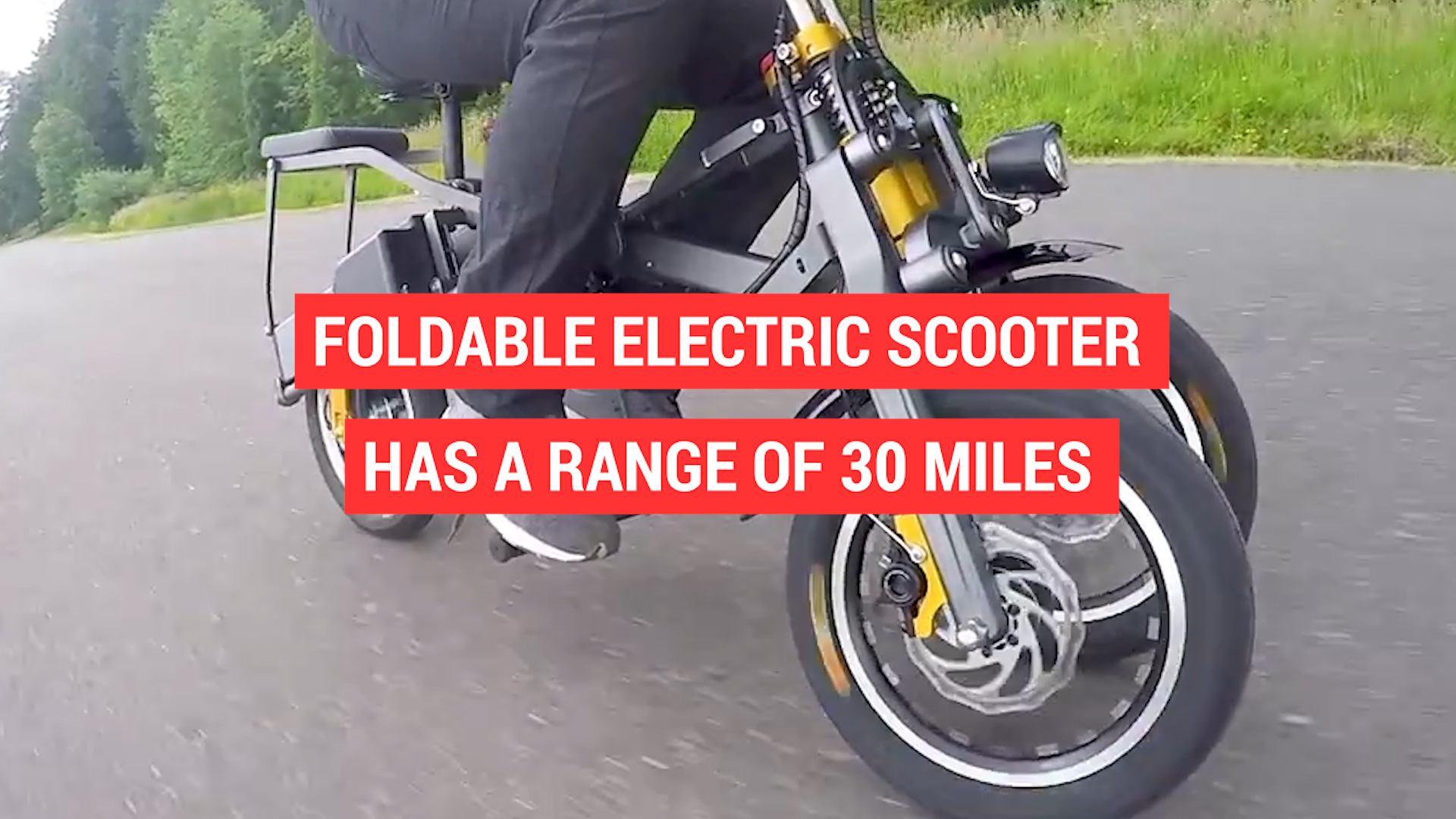