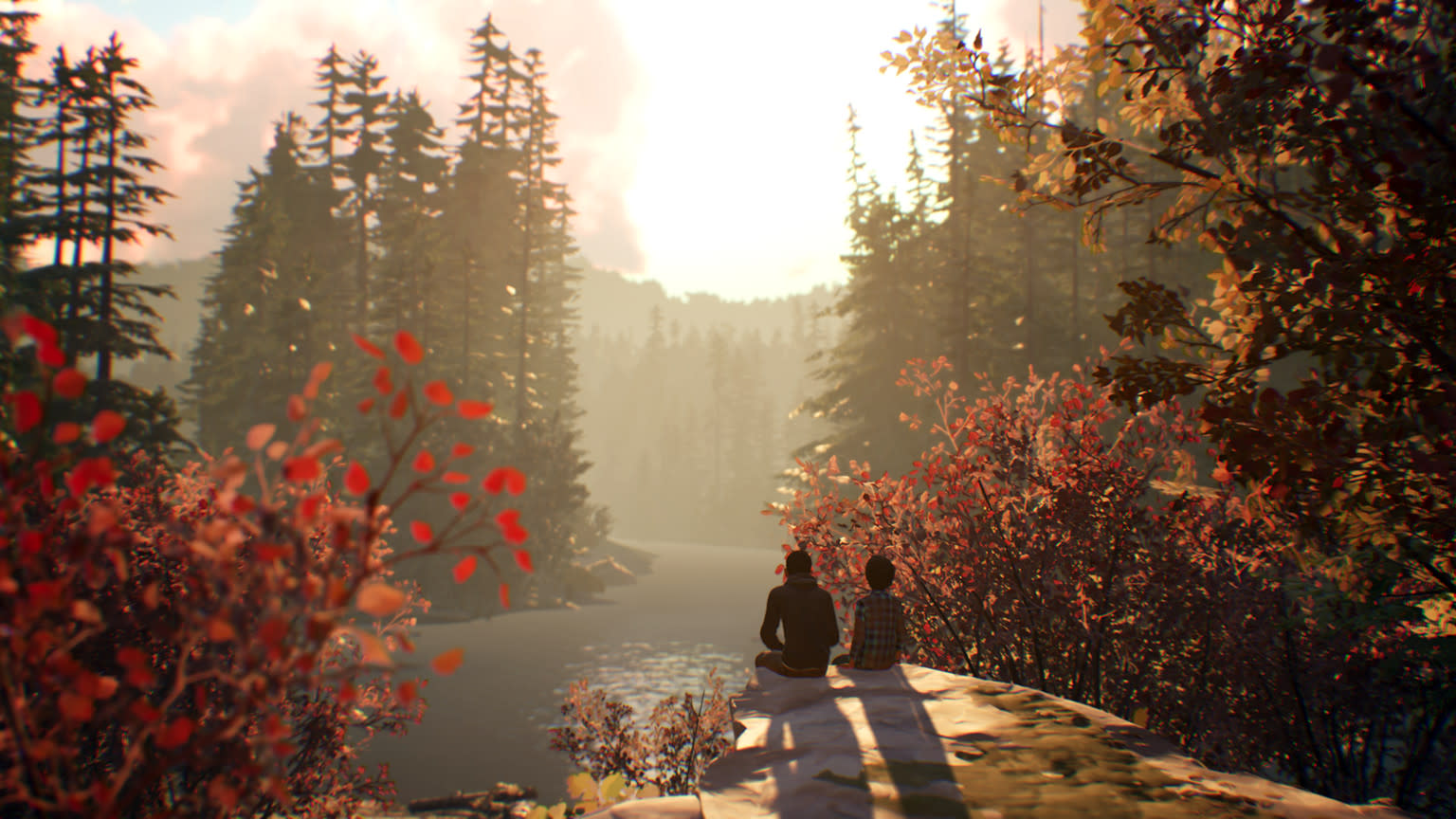 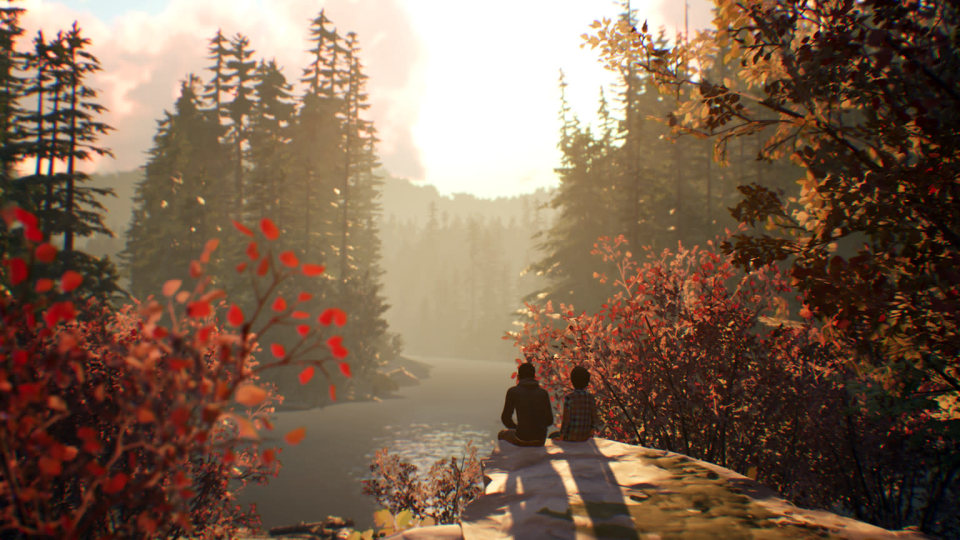 Life is Strange 2 begins with a bleak bang. Developer Dontnod shared the game's first 20 minutes this week on YouTube, introducing series fans to the Diaz family before diving straight into a chaotic, violent scene that sets the stage for the rest of the five-episode season.

It's Friday night and Sean Diaz, 16, is home after school, getting ready for a Halloween party. His 9-year-old brother, Daniel, is working on a secret costume in his room, and their dad is fixing up the car. It's a pleasant, golden afternoon in Seattle -- until Daniel has a run-in with the neighborhood bully in the front yard. Sean jumps in and ends up in a fist fight; the bully goes down hard on a rock just as a police car pulls up and a single officer exits. He draws his gun on the brothers and their dad rushes out of the house. The police officer becomes twitchy and nervous, shouting instructions at the family, telling them to get on the ground. Their dad attempts to intervene and the officer shoots him in the chest. Sean and Daniel have a millisecond to react before the neighborhood is engulfed by a sudden, supernatural storm that flips cars and uproots trees.

Sean wakes up to the sound of sirens. He picks up Daniel, who's barely conscious, and takes in the scene. His father is dead in a pool of blood; the police officer's body is mangled and crushed under his cruiser; the bully isn't moving. Sean makes a split-second decision to flee with his brother. And then the real game begins.

It's important to note a few things in this moment: The Diaz family is Mexican, while the bully and the police officer are white. The shooting plays out like so many grainy body-camera videos and frantic Facebook Live uploads -- a non-white person is staring down the barrel of a white officer's pistol, attempting to communicate through the panic, until something snaps and shots ring out. Another important note is the place Sean eventually decides to take Daniel: His family's hometown of Puerto Lobos, Mexico. The story in Life is Strange 2 is seeped in relevant issues of police shootings, racism and immigration, though these elements aren't the game's main focus. Sean and Daniel's relationship takes center stage and drives the bulk of players' decisions, but it's informed by the heavy foundation laid out at the beginning of the game.

"It's important for us to be linked with a realistic universe."
- Jean-Luc Cano

"It's about society," Dontnod writer Jean-Luc Cano told Engadget. "For sure, there is some link to the actuality of this happening all around the world now, in France and the United States. So yes, it's something we want to talk [about] because it's happening every day to a lot of people. It's important for us to be linked with a realistic universe."

Dontnod director Raoul Barbet added, "This aspect of education, to be on their feet, on the road along with your brother, of course I think has more interest if on top of that you have your father as Mexican -- you've seen the incident in the beginning of the game -- and on top of that, some supernatural elements, I think all those elements give strength to the story and to the characters. So this is all we want."

Life is Strange is known for its emotionally charged storylines and compelling relationships (plus a dash of supernatural weirdness), and the sequel is primed to deliver on this promise tenfold. The first game starred Maxine Caulfield, an Oregon high school student with latent superpowers, and her rebellious, estranged best friend Chloe Price. The focus on a female-led story helped Dontnod find an audience, while the writing and decision-based gameplay netted the studio a handful of accolades. Life is Strange 2 ditches Max and Chloe for Sean and Daniel, though developers at Dontnod hope these characters will resonate with players in the same way.

"What will be the perfect characters to tell this story?"
- Raoul Barbet

The sequel connects to Life is Strange and its short follow-up, The Awesome Adventures of Captain Spirit, which stars 9-year-old Chris Eriksen. Chris seems to have superpowers, much like Max and, apparently, someone in Life is Strange 2. Players' decisions in the previous games will carry over to the sequel, though developers won't say exactly how. The final decision in the first game creates two very different universes, for instance, and could drastically change the course of Sean and Daniel's trip down the West coast.

However the connections are made, it seems likely we'll see characters from both previous installments in the sequel.

"You will meet Chris from Captain Spirit in the game," Cano said. "We won't reveal how and why, but yes, there is a huge connection to Life is Strange 2 and the story of Chris." As for Max and Chloe, Barbet said, "We won't, yeah, we won't say anything about that. I think it is better for the player to discover it."

Life is Strange 2 is already packed with unanswered questions. Who has superpowers? Why did they activate at the moment of the shooting? Will Sean and Daniel run into Max or Chloe? How will events of previous games manifest in this storyline? Do more people have superpowers? Barbet and Cano are happy to let players find these answers on their own when the first episode debuts on September 27th.

In this article: av, brotherhood, dontnod, family, gamescom, gamescom2018, gaming, immigration, indie, interview, lifeisstrange, LifeIsStrange2, personal computing, personalcomputing, police, SquareEnix, TheAwesomeAdventuresofCaptainSpirit
All products recommended by Engadget are selected by our editorial team, independent of our parent company. Some of our stories include affiliate links. If you buy something through one of these links, we may earn an affiliate commission.