It's no longer just for the company's convertible notebooks.

Lenovo makes a massive array of stuff. It's produced smart speakers, VR headsets, a Google Assistant display, tablets and phones, among other things. Within its laptops range alone, the company has five separate sub-brands: ThinkPad, IdeaPad, Yoga, Lenovo and Legion. And each of these brands forks even further, like the ThinkPad X, T, P, A, E, L and V series. Oh, and don't forget the ThinkPad Yoga series, which is technically under the ThinkPad sub-brand, but not in the Yoga. It's insanely confusing, but it seems like Lenovo might finally be simplifying things.

The company is consolidating its premium laptops into the Yoga brand, which used to be exclusively for its convertible devices with 360-degree hinges. So now, instead of flexible, bendy things, Lenovo wants its Yoga name to represent high-end devices. It's signaling the change by introducing a couple of new Yogas here at IFA 2018, and includes other categories like clamshells.

First up is the new Yoga C930 (not the new Yoga Book C930), a gorgeous 14-inch notebook with speakers built into its hinge. These come with Dolby Atmos enhancements that the company is calling a "rotating sound bar hinge speaker system," and help ensure your audio isn't obstructed regardless of how you've propped up your laptop. The C930's 13.9-inch display, which can be configured with up to a 4K resolution, uses Dolby Vision for dramatic image quality.

Notably, this is the first PC to offer both Dolby Vision and the Dolby Atmos speaker system, which should provide a compelling entertainment experience. It'll cost $1,100 when it arrives in October.

Next is the Yoga Chromebook C630 (not to be confused with the just-launched C630 WOS, sigh). It's a premium 15-inch Chromebook made of aluminum that packs a full HD screen and an eighth-generation Intel Core i5 CPU, which should be more than enough to keep the Chrome OS system running smoothly. By the time this retails in October for $750, it'll have to jostle with Acer's new metal-and-glass Chromebook 514 (which costs a mere $350) and Dell's just-announced premium Inspiron 14 Chromebook 2-in-1 for your dollars. The Dell system costs $600, and like the Acer Chromebook it has a 14-inch display that's smaller than the Lenovo. 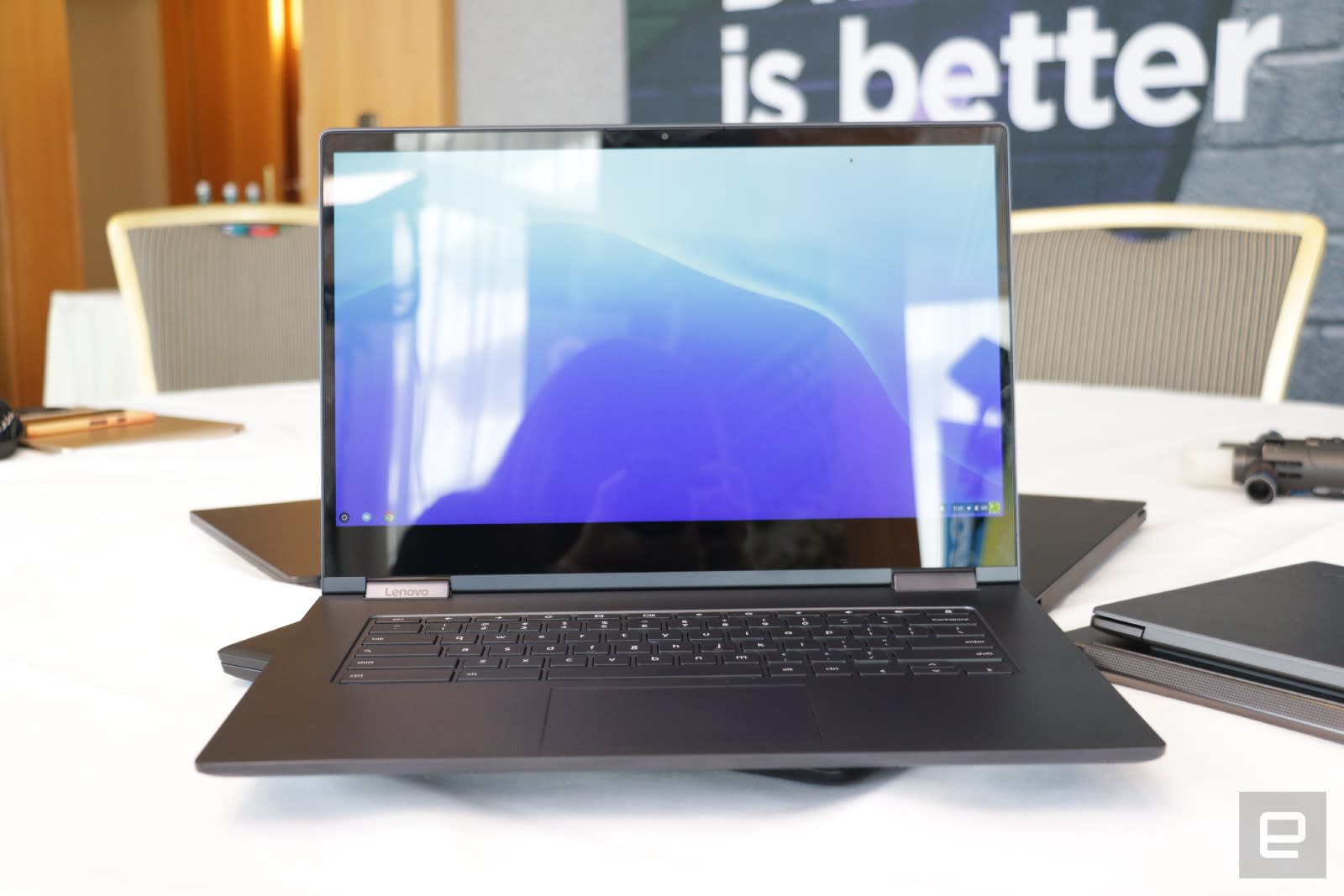 Finally, there's the Yoga S730, a thin, light 13-inch notebook with eighth-generation Intel Core i5 or i7 processors and a full HD display. It's like a smaller, no-frills version of the C930, and is $100 cheaper. It'll cost $1,000 when it retails in November.

But wait, Lenovo's not done. It's also announcing a pair of midrange and budget Chromebooks that start at around $300, as well as new monitors and smart home appliances. If you so desire, you can get Lenovo's new smart plugs, lights and cameras to fully deck your connected home out in the company's gear. This is probably a good idea for those who've bought a Smart Display, which can control these accessories easily via Lenovo's Link app in addition to the Google Assistant. The Smart Plug and Smart Light cost $30 each, while the Smart Camera comes in at $100, and will be available in the US from November.

As Lenovo streamlines its laptop brands, it appears to be branching out into other product categories. I don't know that the refocus has made things any less confusing -- I got the specs messed up myself a few times while writing my various hands-on and news articles, thanks to the extremely similar names. But Yoga is a strong brand for the company, and choosing to consolidate around it is astute. Lenovo just needs to seriously declutter.