And you don't have to visit Jurassic World to get one.

Since dinosaurs went extinct 66 million years ago, we've never experienced them as living, breathing animals. We can look at their bones in a museum, or we can watch recreations of them in films like this summer's Jurassic World: Fallen Kingdom. But both those options lack that visceral feeling you get from seeing a real creature in a zoo. Though it's unlikely you'll ever see a dinosaur in the flesh, you can still pretend to have one as a pet, thanks to Mattel's new Alpha Training Blue robot. She roars, coos and even responds to your commands like her movie inspiration -- but is far less deadly.

The Blue robot stands more than a foot tall and is a pretty complicated piece of electronics. Thankfully you're not expected to put her together like the Kamigami dinosaurs Mattel introduced earlier this year. She's impressively constructed, with seven hobby-grade motors inside and more points of articulation than designer Michael Kadile can count. He's the same engineer who brought us the smoke-spewing Batmobile from last year's Toy Fair, and Blue exhibits an equal amount of obsessive detail.

Blue can growl when she's feeling hostile and purr when she's happy. Her mood depends on which activity mode she's in: guard, training, total control and prowl. The training mode is probably the one you'll spend the most time with, as it's the most interactive. The controller has a clicker button on the back that you'll use to teach her simple movements and reactions, just like how Owen trains the raptors in the film. 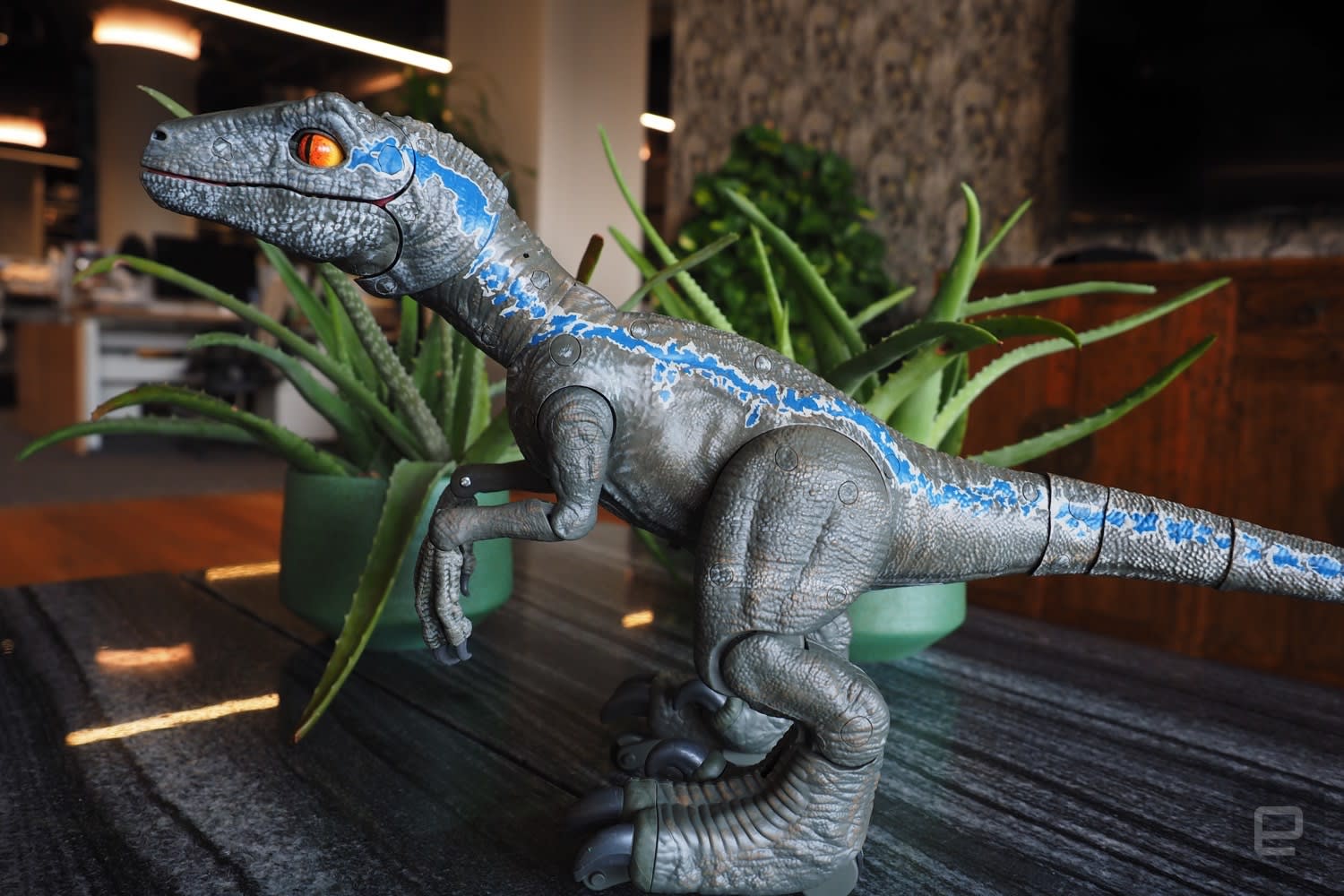 She has seven training levels, with the first few focused on basic commands like looking up and down and turning left and right. To teach Blue a trick, you press the clicker a number of times and then move the controller in a certain way. The included manual has the full list of commands, though I found the diagrams somewhat lacking. Do I need to wave the controller wildly in that direction, or will a slighter motion do? How far do I need to rotate it? At least the controller is clear when you're not doing it correctly: It will flash red to indicate that Blue didn't understand what the heck you want. The final training levels involve more-complex motions like spinning around in a circle and an attack mode where she leaps forward and growls. Oddly enough, it was the most basic commands I had trouble getting right: Blue doesn't always seem to understand when I turn the controller right that she's supposed to face that direction.

If you perform the movements correctly and Blue gets what you're trying to teach her, she'll perform the action and the controller will flash green. Then you have to reward her by either gently petting on top of or under her head or feeding her with the controller. Pushing the treat button will automatically have her nomming down on an invisible snack and smacking her dinosaur lips, but if you hold down the button she'll actually follow your hand around, waiting for you to toss the food to her. 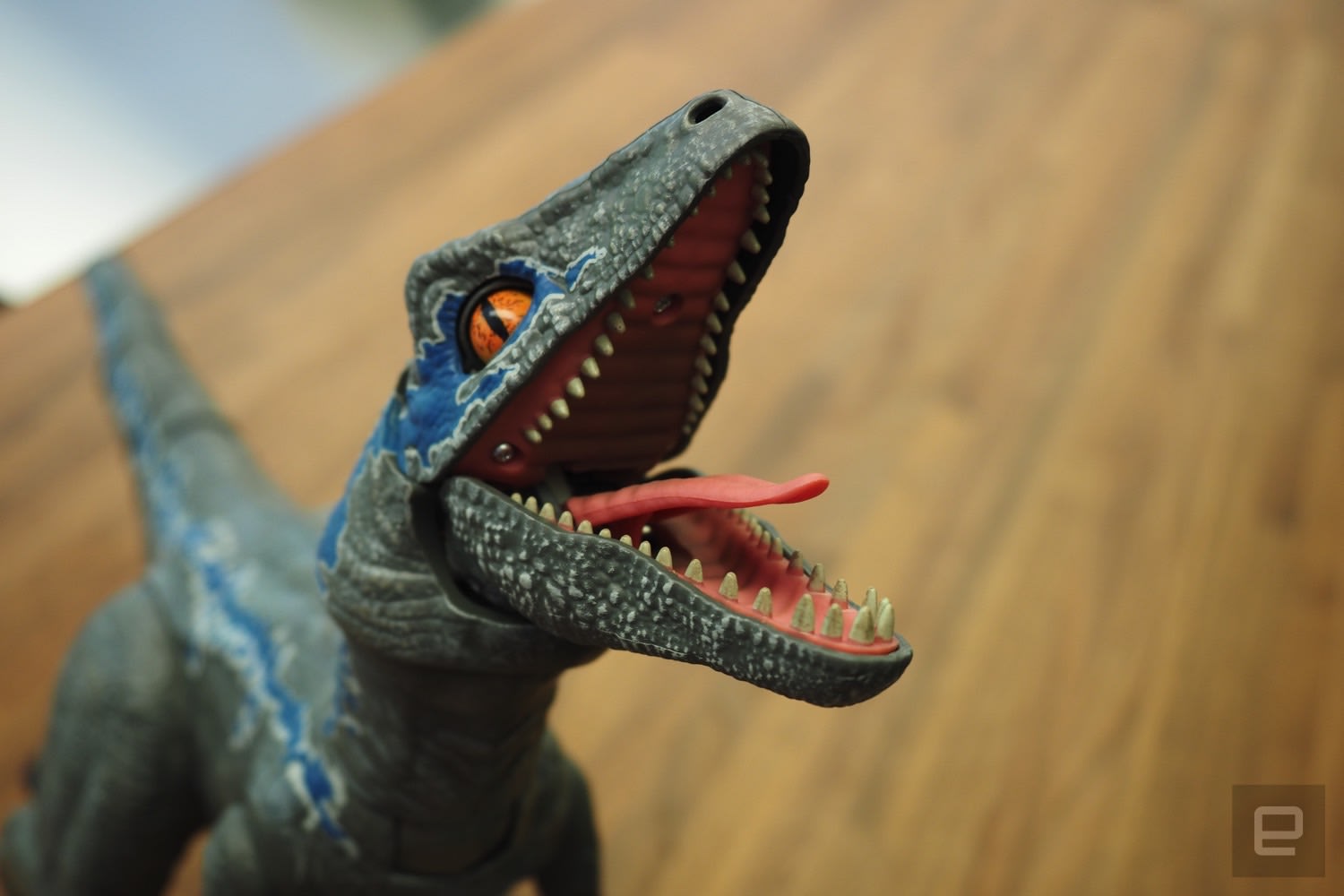 Even if she wasn't always responsive, it still only took about an hour to get Blue to level seven. That's actually two sessions with the dinosaur, as the lithium-ion battery runs for about 35 minutes and takes as much time to charge. Annoyingly, to power her up you need to unscrew a plate on her underside and insert a proprietary plug. To make matters worse, if the plate isn't sealed up, Blue won't run. So instead of just keeping a pile of batteries around, now you need to keep a Phillips head screwdriver on hand at all times. And the plate can be tricky to put back in, so this isn't a quick unplug-and-go type of toy. At least the controller uses a standard microUSB port to charge.

When you're finished training Blue, there's still plenty to do with the robot. She has three other modes. Total control lets you control her expressions by simply nudging the joystick on the controller while prowl has her cruise around the floor like a remote control vehicle, except that Blue ambles more than rolls. 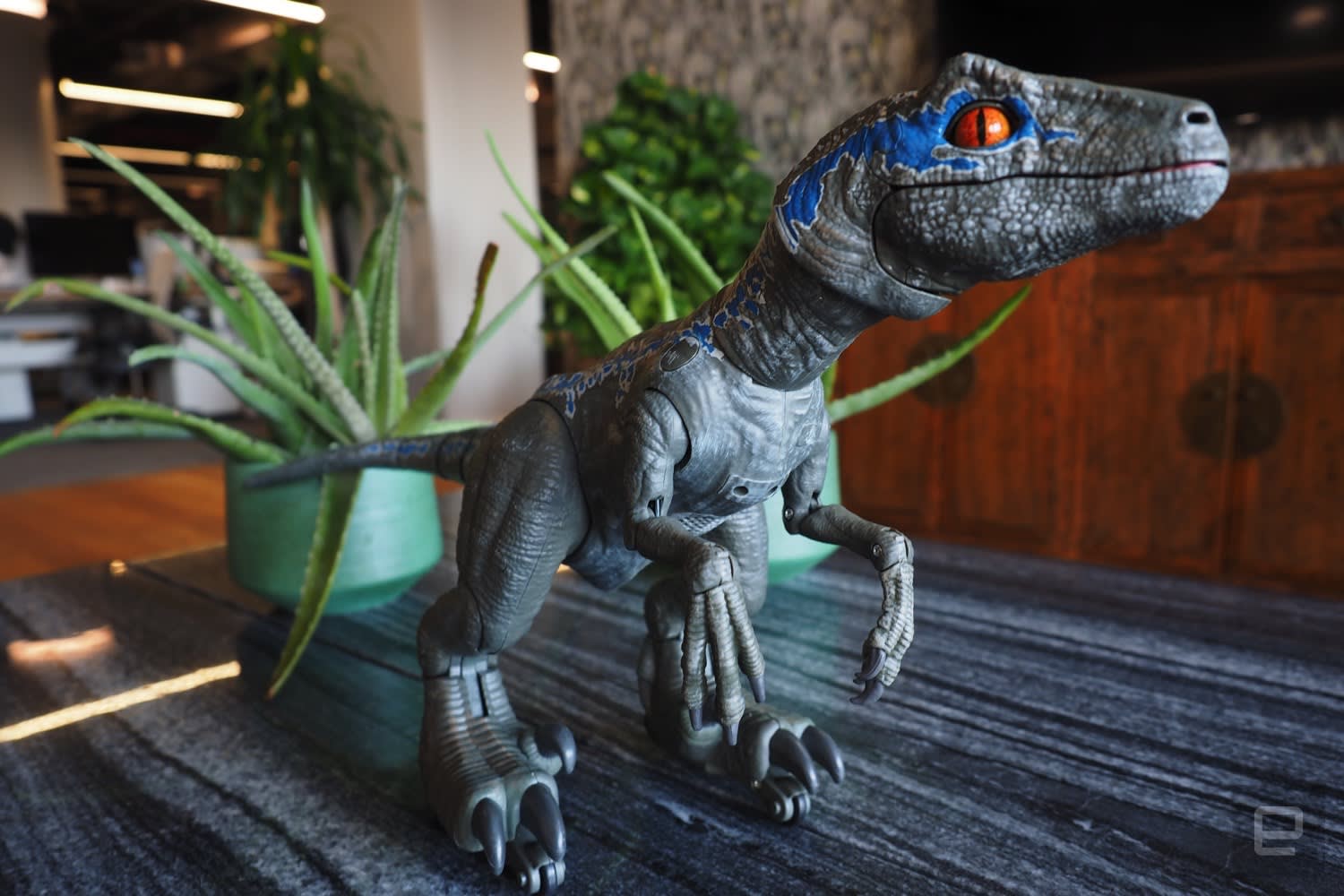 The most interesting of the other three modes is guard. Blue simply waits in position, and if she senses motion within a foot of her, she'll react to it. How she reacts depends on how much you've trained her: Early on she growls and snaps at intruders into her space, but later on she'll give more friendly yips and purrs. You can still set her to be hostile if you want her to scare away people who walk into your bedroom. The controller will vibrate to let you know Blue is detecting motion, and you can use it to move her around in response.

Pet robot dinosaur ownership isn't cheap: Alpha Training Blue will cost $250 when she's released in October. But at least she's not as expensive as the new $2,899 Aibo, and while robot dogs are pretty adorable, this Cretaceous-era darling definitely has her own charms.

All products recommended by Engadget are selected by our editorial team, independent of our parent company. Some of our stories include affiliate links. If you buy something through one of these links, we may earn an affiliate commission. All prices are correct at the time of publishing.
Mattel's new robot is a pet dinosaur that won't try to eat you
alphatrainingblue
dinosaur
entertainment
hands-on
jurassicworld
mattel
robots
toy
toys