When Samsung launched the Galaxy Home speaker earlier this month, people were quick to point out how its name seemed ripped off from Google. Not to be outdone, Huawei is unveiling its own AI speaker here at IFA 2018, and it's clearly borrowed much more from the Google Home... just not the name. The AI Cube is a cylindrical speaker that looks like a stretched out version of Google's device, though it will offer Amazon's Alexa instead of Assistant. Like Samsung, Huawei is promising high-quality audio on its speaker. That's not all -- the AI Cube is also a 4G router.

I didn't test the connectivity here at the show, but I did get to hear how the speaker sounds. Well, how Alexa sounds, anyway. The demo devices weren't connected to any music service, so we couldn't play any actual music. I can tell you that the Cube gets impressively loud, and its audio quality seemed decent during Alexa's brief solo concert after a rep yelled at it to "Sing a song!" The tune sounded the same as I walked around the speaker, indicating some sort of omni-directional output was at play, though Huawei didn't explicitly mention this.

What the company did say, though, was that the AI Cube has a 400ml sound cavity, aluminum diaphragm and passive radiators. These components are supposed to help it provide clear midranges and high notes, while offering strong, rounded bass. Huawei also offers its own Histen ("Huawei Listen") audio enhancements that include "virtual bass, linear phase equalizer (and) adaptive gain control." This proprietary tech is supposed to "respect the original timbre" of songs, though I don't really understand what that means. Since I didn't get to hear actual music with notes across a spectrum, I can't tell how well these features work. 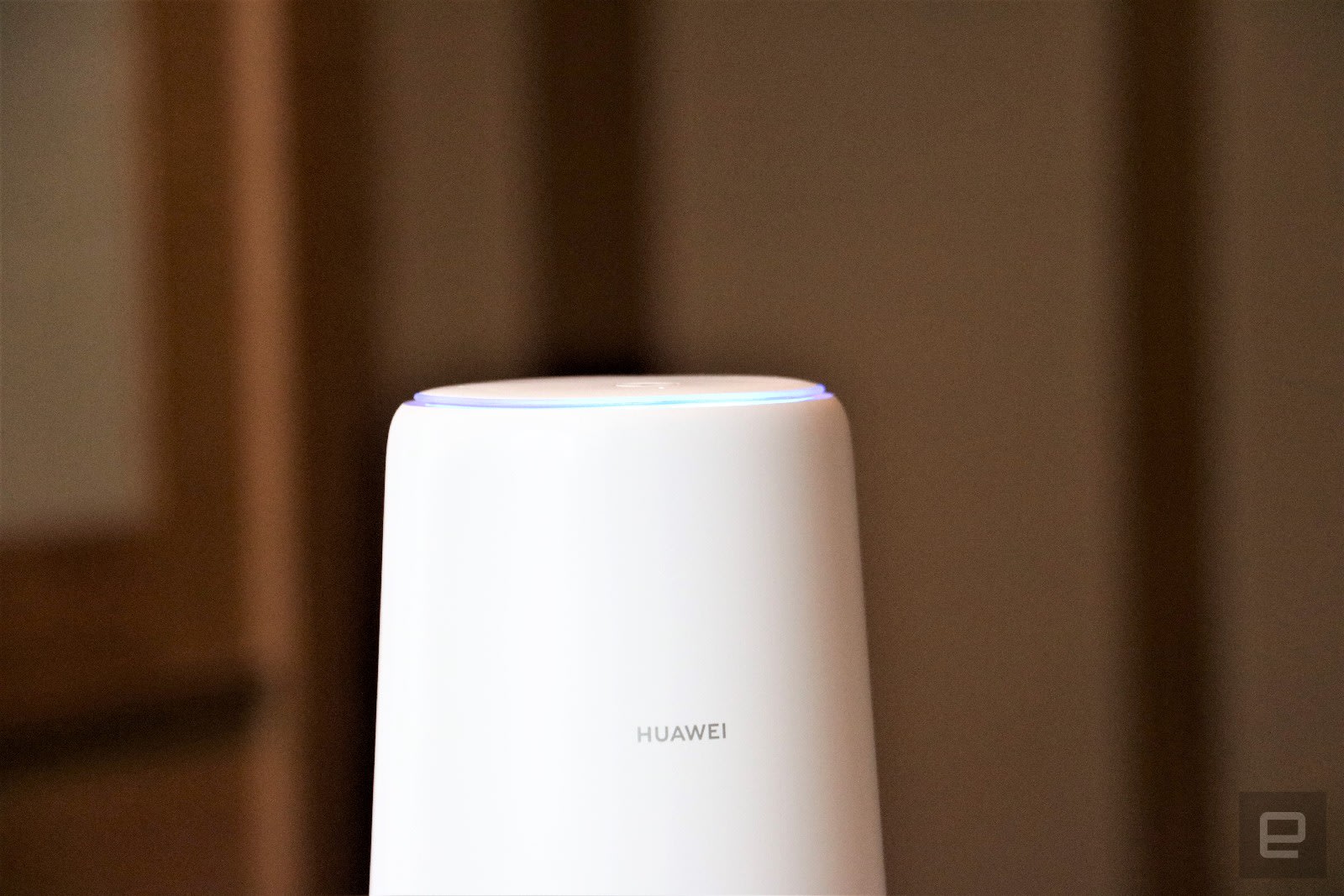 Alexa seemed to work fine on the Cube, though it doesn't respond as quickly as I'm used to on my second-gen Echo. That could be because it had to struggle to understand me over the multiple voices in our demo room, or due a poor internet connection. Or it could just actually be slow -- I won't know for sure until I can test one out at home (although I might not get to -- more on that later). The noisy environment also made it difficult to judge how well the speaker's four far-field microphones picked up my voice from a distance, but I definitely needed to speak clearly and deliberately for it to hear me.

I don't really know how I feel about the AI Cube's design. First of all, it's not a cube. Then, on one hand, it's such a blatant copy of the Google Home that it's hilarious. On the other, there's a version with a red mesh covering on the bottom that doesn't look awful, and overall the Cube's clean aesthetic is inoffensive. Like most smart speakers, this thing has volume and mute buttons on top, and has a light ring that glows when it's thinking, just like Amazon's Echo. For people who want an Alexa speaker but like the Google Home's design, this might be a suitable solution.

The company hasn't made it very clear what else it's done to enhance the AI Cube, though reps at a briefing said a few times that "Huawei has developed something into this device" that makes the Alexa experience a bit different. 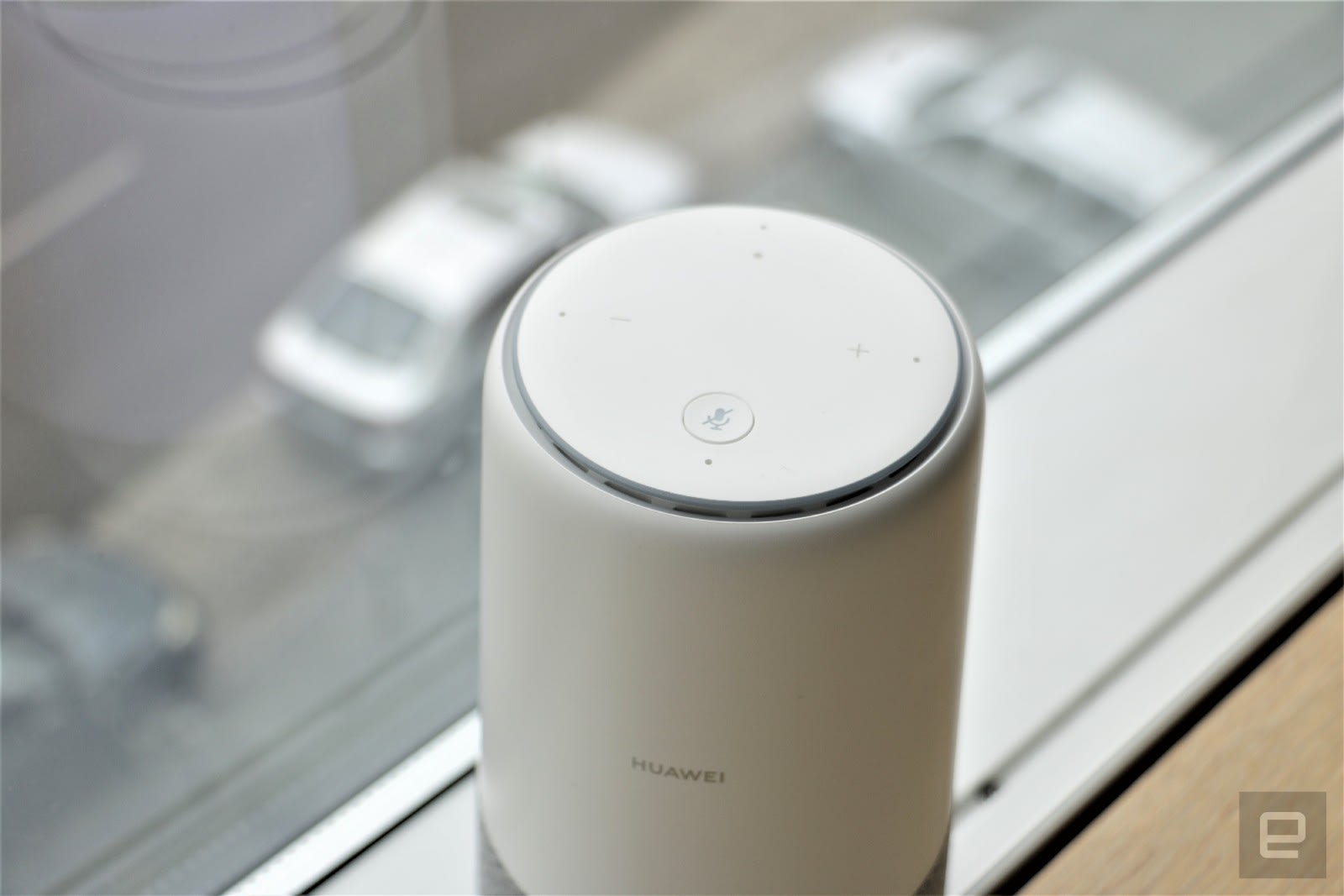 As a 4G and WiFi router, the AI Cube is pretty basic. It has a Cat 6 4G LTE radio which can get up to 300 Mbps on the downlink, and a dual-band 802.11ac WiFi chip that reaches 1,200 Mbps down, too. It also supports Huawei's HiLink platform to easily connect compatible devices. Nothing too impressive here really, other than the sheer fact that it's a cellular data and WiFi router built into a smart speaker.

It'll be months before we'll get to see the AI Cube hit store shelves. The device will arrive first in Europe during the Christmas season, and Huawei said it will only share the price around that time. There are no plans to release this in China at the moment, and whether it will be sold in the US remains a mystery.

All products recommended by Engadget are selected by our editorial team, independent of our parent company. Some of our stories include affiliate links. If you buy something through one of these links, we may earn an affiliate commission. All prices are correct at the time of publishing.
View All Comments
Huawei's Google Home clone has Alexa inside