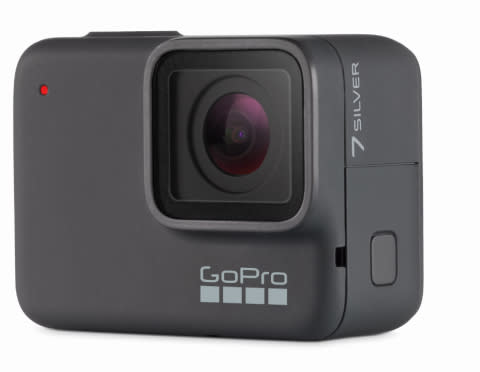 The leaks were true, and then the subsequent leaks covered nearly everything else. GoPro has unveiled the Hero 7 action camera family, and the focus this year is on the basics -- that is, an easy-to-understand lineup of cameras that take better shots. The highlight of the bunch is undoubtedly the $399 Hero 7 Black (which we've just reviewed), whose in-camera HyperSmooth stabilization is billed as good enough to rival the rock-solid footage you'd get using a gimbal. We're not convinced it's that good in practice, but it's certainly a perk. Accordingly, there's a TimeWarp feature that behaves like a souped-up version of Instagram's Hyperlapse, turning your bike ride or diving session into a smooth seconds-long clip.

Not that GoPro is leaning solely on anti-shake technology to sell the Black. The 4K60-capable camera is designed to be social with a livestreaming option that shares videos online even as you're recording them for posterity. You can even capture vertical videos and photos to please the smartphone crowd, set photo timers for selfies and limit videos to social-friendly 15- or 30-second lengths. There's smart scene recognition to apply effects like HDR in photos, while face, smile and scene detection help speed up automatic QuikStory edits. Reworked audio capture promises both a wider dynamic range and reduced vibration when mounted. And if you're a slow motion fan, 1080p 240FPS shooting might help with the shot.

If the Black is overkill for your needs, it's clearer as to what you'll get when you step down. The $299 Hero 7 Silver doesn't have HyperSmooth or 60FPS 4K video (just 30FPS), but it still boasts "significantly improved" video stabilization and features like voice control and vertical videos. At the entry level, the $199 Hero 7 White touts the same features as the Silver with 1080p60 footage.

You can pre-order all three Hero 7 models now, with retail launches starting September 27th internationally and September 30th in the US. It's not certain that these will help GoPro revive its ailing fortunes. However, they cut to the core of what action camera users typically want: stable, beautiful-looking videos they can easily share with others. You'll want to read our review for our full verdict, but the company appears to have largely achieved that goal with the Black.

In this article: actioncamera, camera, cameras, gear, gopro, hero7, hero7black, hero7silver, hero7white, leak
All products recommended by Engadget are selected by our editorial team, independent of our parent company. Some of our stories include affiliate links. If you buy something through one of these links, we may earn an affiliate commission.