How to buy a turntable

Making smart choices now will save you money in the long run.

So you want to start collecting vinyl. Great! Record sales have been steadily climbing, and in March, physical music outsold downloads for the first time in six years. You might've even started buying vinyl already to get in on the action. But given how long the format has been around, picking out a turntable can be as daunting as building a home HiFi system to connect it to. It doesn't have to be.

You can spend anywhere from $60 on a Crosley all-in-one at Target to more than $3,000 for an audiophile-grade deck, with plenty of options in between. But what's the difference between a budget turntable and something that costs more than a few months' rent? And do you really need to spend that much? What are the features you shouldn't go without? Let us give you a hand.

Though it may not be the case with an amp, you aren't exactly at a disadvantage buying a new turntable versus vintage. Once you get out from the sub-$100 range, your firsthand options open up considerably. It's just a matter of how much you want to spend. Unlike older models, many new turntables offer modern conveniences like Bluetooth and USB output for digitizing your collection.

Our friends at Wirecutter recently weighed in on the topic in response to a reader's letter, saying that advances in electric-motor and speed-control technology have trickled down from more expensive models to those that are easier on the budget. In fact, the publication says its top pick would cost several times as much in the seventies than it does today.

However, many modern turntables skimp on creature comforts that were prevalent in vinyl's original heyday -- conveniences like auto-stop, which lifts the tonearm and stops the platter from spinning when that side of the record ends. It might not sound like a big deal, but it's a solid way to prevent unnecessary needle wear when you don't jump up to flip the record immediately. Of course, older turntables are going to sound a little different too ("warmer," according to our resident expert Jon Turi), so you have to decide if that's important as well.

Features to look for

New or vintage, these are the features you shouldn't skip when you're looking for a turntable.

Dust cover: Any debris on a record will cause the needle to skip during playback and everyone in your living room to jump in time. A dust cover keeps your records and needle clean and everyone grooving to the tunes.

Bluetooth-to-speaker connections: If you're running a turntable in a dorm room (or don't want to fuss with a full-on HiFi setup), a turntable with a Bluetooth connection can solve a lot of headaches.

Pitch control: This is primarily used for fine-tuning record speed, but, assuming your motor is running true, most people won't necessarily use it.

Backwards play: Admit it, part of the reason you started buying vinyl was to see if you could hear the hidden messages supposedly buried in "Stairway to Heaven" when played in reverse. Backwards play is pretty superfluous, sure, but when it's combined with pitch control and your vintage amp's reverb knob, it becomes really easy to make your own remixes of songs -- or, if you're a budding hip-hop producer, samples for beats.

If you go the vintage route, the same warning applies to turntables as it does amps. Quality matters, and buying from eBay or pulling your mom's old deck out of the attic could cause more frustration -- and eventually cost more money in repairs -- than buying used from the local stereo shop. You also need to check cartridge and replacement-needle compatibility, given that those wear out over time.

You have one more choice to make when it comes to your turntable: direct drive or belt-driven. With direct drive, the motor mates directly to the spindle. On a belt-driven model, the motor sits off to the side and is connected to the platter by a rubber belt. There are pros and cons in each case; how you plan to use the deck should be a factor in your choice.

DJs tend to favor direct-drive models because they're heavier-duty, their speeds are more accurate and the motor can withstand more abuse than a thin rubber belt can. For the everyday listener, they're great because you don't have to replace belts. On the other hand, the motors can introduce additional noise to the playback.

That's why belt-driven turntables tend to be favored by high-end audiophiles. The problem, though, is that belts can stretch and slip, which will prevent the record from spinning at the proper speed, thus affecting how the record sounds when you listen.

What you'll get for the money

Regardless of whether you go modern or vintage, you more or less get what you pay for. The important thing to keep in mind when you're looking at a record player is that if you invest wisely now, you won't need to keep replacing it (or repairing it) as time goes on. Aside from replacing the cartridge and/or needle, a good turntable won't require much effort after initial setup. If you go for a belt-driven model versus a direct drive, you'll have to replace said belt, but that's about it.

If your budget is tight, it's better to look for a good secondhand model ($100–$250) at your local stereo shop than buy a cheap new one. Lower-end turntables like some from Crosley are convenient, packing everything needed for listening into a briefcase-size box, but they're not made from quality components and can actually damage your records. Budget-minded decks typically skimp on things like adjustable tonearm weights, anti-skate settings and sturdier construction. 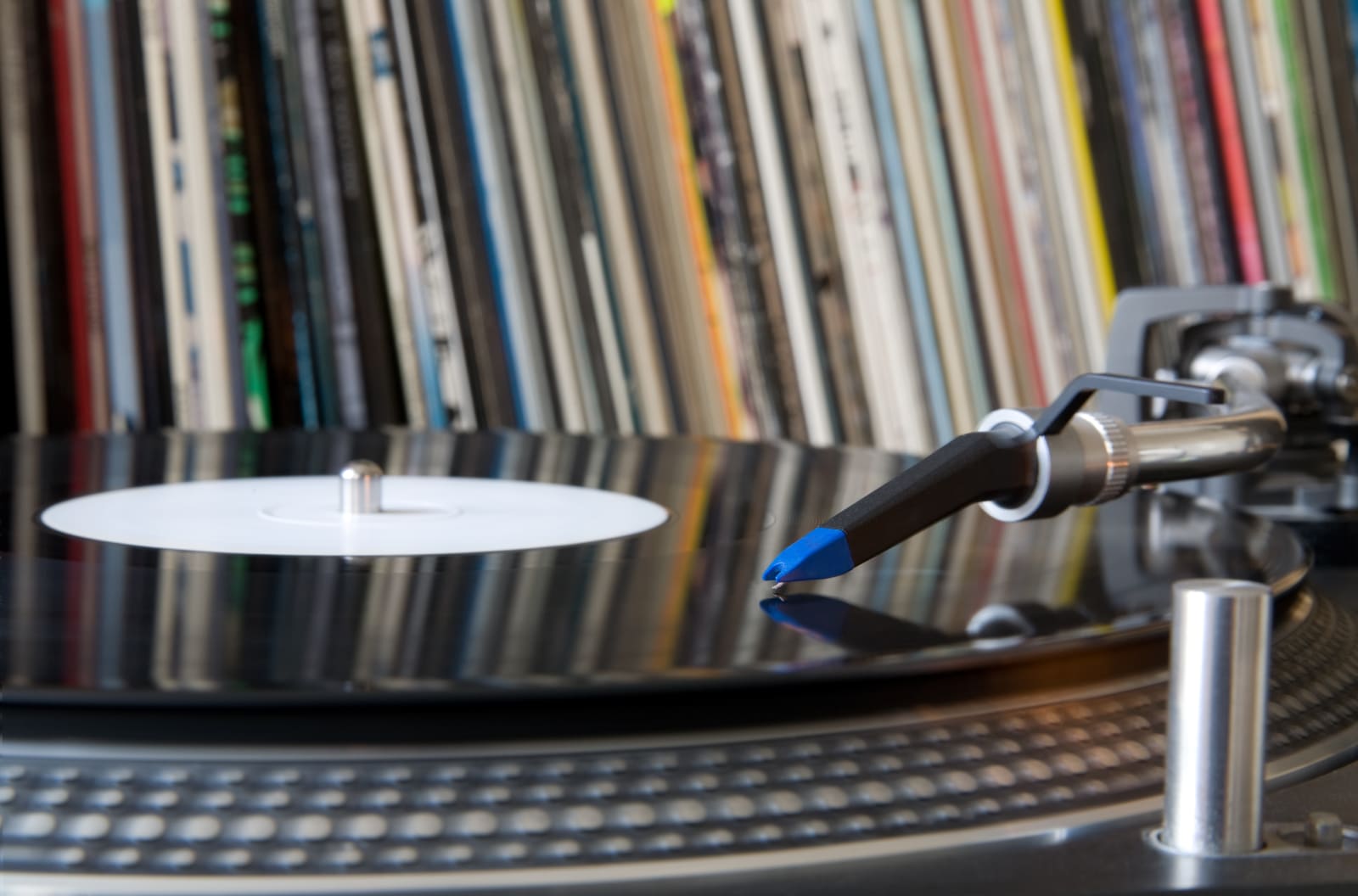 Together, those features ensure that the needle isn't riding too heavy -- or off-kilter -- which can hurt a record's grooves over time. The extra weight and adjustments also help keep the tonearm from bouncing around when someone is walking near the turntable. The vinyl you're buying isn't cheap, so why should your turntable be?

Should you opt for a new model, expect to invest at least $200 to $300. If you spend more, those benefits come with diminishing returns -- unless you're a professional DJ or an extremely discerning audiophile, anyway. Most people will be better off using the extra money to buy more records.

The AudioTechnica AT-LP120 USB is a great option, offering a USB connection for digitizing your record collection (via Audacity) and a fully adjustable tonearm. The price has slowly crept up in the past few years, but if you go the Amazon route, the direct-drive deck will set you back $300 as of this writing. It's Wirecutter's top pick for most people and, more than that, its styling pays homage to the legendary Technics SL1200 at a fraction of the price. We also like Pro-Ject's line of minimalist, belt-driven Debut turntables, which range in price from $400 to $600 and come in a handful of colors and finishes. Keep in mind, though, that you'll need to invest in a separate phonograph pre-amp or connect it to a receiver with a powered phonograph input. Otherwise you won't hear much.

Unlike AudioTechnica's offerings, the $399 base model requires you to lift the platter and then adjust belt placement to switch from 45 to 33 rpm. Stepping up to the high-end model adds push-button speed switching and an acrylic platter, as opposed to the base model's steel one, but also bumps the price up to $599.

If digitizing your collection is of the utmost importance to you, consider Sony's PS-HX500 (below). The open-source Audacity is a great, free piece of audio editing and recording software, but using it for making high-res digital copies of records is anything but simple. The Sony deck is down to $500 from its initial $600 asking price, but Sony is confident that its proprietary ripping software, analog-to-digital converter and dead-simple setup are worth the premium. In our hands-on time, our main gripe was quirky software, but Sony pretty much nailed everything else.

When Emile Berliner designed the first gramophone discs in 1887, he probably never imagined the format would still be in use 130 years later. Turntables have advanced considerably since then, but the underlying mechanics remain the same: a stylus rubs on a piece of spinning plastic and reproduces music.

Finding the right equipment that won't damage the record collection you inherited from your cool uncle doesn't have to be difficult, and hopefully this guide gives you a better idea of what to look for when you start browsing. At this point, it doesn't seem like vinyl is going anywhere, so making smart decisions now will allow you to reap the benefits for years to come.

All products recommended by Engadget are selected by our editorial team, independent of our parent company. Some of our stories include affiliate links. If you buy something through one of these links, we may earn an affiliate commission. All prices are correct at the time of publishing.
View All Comments
How to buy a turntable