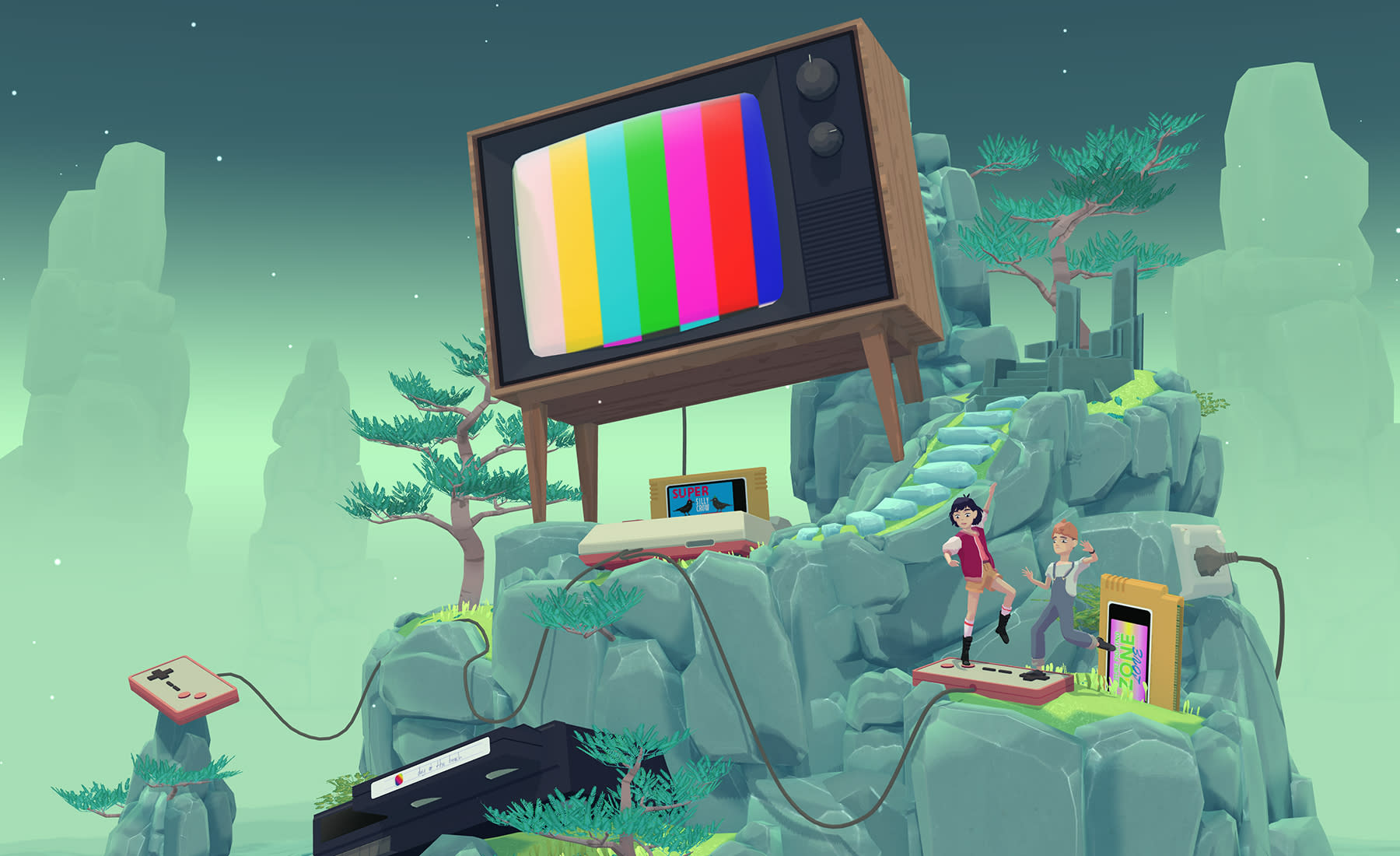 How much of your childhood do you remember? Fleeting moments, I suspect, that made you chuckle, laugh or sob. The days you spent with classmates, perhaps, pulling pranks or killing time during summer break. But not everything. The Gardens Between, a surreal puzzle game by The Voxel Agents, is a bittersweet exploration of the memories and unforgettable friendships we forge as wide-eyed youngsters. While not the longest or trickiest indie game, it does a stellar job capturing the mundane adventures that, infused with childlike wonder and imagination, brought us closer to the people we knew as kids.

The story starts with two friends, Arina and Frendt, sheltering from a storm in a treehouse behind two residential homes. They seem upset until a mysterious orb of light appears and whisks them away to a dream-like world filled with small islands. These idyllic 'gardens' are littered with enormous objects ripped from the pair's fondest and, sometimes, saddest moments together. The opening level, for instance, is about the day Arina's family moved to the area, and Frendt popped round to nervously say hello. The island is peppered with moving boxes that have 'lounge' and 'bathroom' written on the side in black marker pen. In the distance, you can see a door frame, a 'welcome' doormat and a suburban postbox.

Your job is to climb to the top of each island with a lantern that contains a glowing orb of light. Which sounds simple enough, except you don't have direct control over the characters. Pushing right on the analog stick causes time to move forward, and vice versa. As the girls bound toward the summit, the island will often change, blocking a path or gobbling up the light in their possession. To succeed, you'll need to change time by 'scrubbing' through the level and activating important objects. In the second level, for instance, I waited until the girls had walked past a light-consuming vortex, pulled a piece of mystical rope to make the obstacle disappear, and then rewound time until the pair had the orb again.

As with all good puzzle games, the difficulty slowly ramps up. Another island features a cream-colored computer clearly inspired by the original Apple Macintosh. Near the start of the sequence, the two children walk across a numeric keypad that enters a random string into the machine. I had to push forward, find a hidden passcode in the level, and then enter it by carefully moving the girls (using the time-scrubbing mechanic) over the giant buttons. The solution revealed a menu with four helpful items that I could cycle through with the keypad and summon with a nearby printer.

Levels are themed around objects which, put together, reveal special memories.

The time-shifting puzzles were inspired by the 2002 science fiction film Minority Report. Back in 2011, The Voxel Agents were thinking about a game centered around memories that you could subtly change. "We made 30 different prototypes with really varying ideas," Matthew Clark, the director and programmer of The Gardens Between said. The studio was only two years old, though, and wasn't ready to take on a project that was so ambitious. "The scale was huge, it was content heavy and just very expensive to make," Simon Joslin, the game's eventual level designer and executive producer said. "We didn't have the funds, so we set it aside."

"It's important to cherish and appreciate those special times."

The team worked on a smartphone game called Puzzle Retreat before returning to its time-bending prototypes in 2014. Much of the four-year development cycle was dedicated to the puzzles, which were extremely complex to design. Many started on paper as two simple timelines for Arina and Frendt. Though you push the characters forward simultaneously, they often diverge and encounter different objects. These points of interaction create forks, or divergences, that impact everything else in the level. The team had to map all of these out, as well as every possible permutation if players accidentally triggered them out of order.

Testing and subsequently tweaking the island puzzles had massive ramifications. "Moving a single object before or after another object can change every single possible permutation for what the player can do in that world," Joslin explained. "[The game] was such a nightmare to design."

Rewinding time to enter a passcode.

The puzzles needed to be thematic, too. Every garden is part of a cluster that, once completed, unlocks a complete memory shared by the two girls. The aforementioned computer puzzle, for example, is succeeded by a level about a giant set of dinosaur bones. Finish both and you'll see a vignette of a museum exhibit that contains both relics. All of the gardens, then, had to fit both the game's linear story and slowly escalating difficulty curve.

The head-scratching puzzles and breadcrumb storytelling work in tandem. If you're stuck on a particular puzzle, your thumb will naturally leave the analog stick, causing time to freeze. I did this all the time both to contemplate a puzzle and admire the gorgeous art by illustrator Jonathan Swanson. On a subconscious level, I was also scrutinizing every detail that would eventually form the plot-critical vignettes. It meant the complete memories felt more vivid, and fully realized, than a traditional cutscene. You're only getting glimpses of Arina and Frendt's friendship -- but like our own fuzzy memories, it's enough to feel a nostalgic longing for the past.

"I barely have time for friends now," Clark said. "And it's kind of a shame. But it's also important to cherish and appreciate those special times."

I won't spoil the ending (you really need to play it for yourself). If you're interested, the game is out now for $19.99 on PS4, PC and Nintendo Switch.

Some islands recreate a rainy afternoon playing video games.
You need a glowing lantern to complete each level.
Arina and Frendt's suburban homes.
Finish a group of islands and you'll be rewarded with a complete memory.
Changing the radio frequency will cause different boxes to leap around the level.
In this article: art, gaming, TheGardensBetween, TheVoxelAgents
All products recommended by Engadget are selected by our editorial team, independent of our parent company. Some of our stories include affiliate links. If you buy something through one of these links, we may earn an affiliate commission.