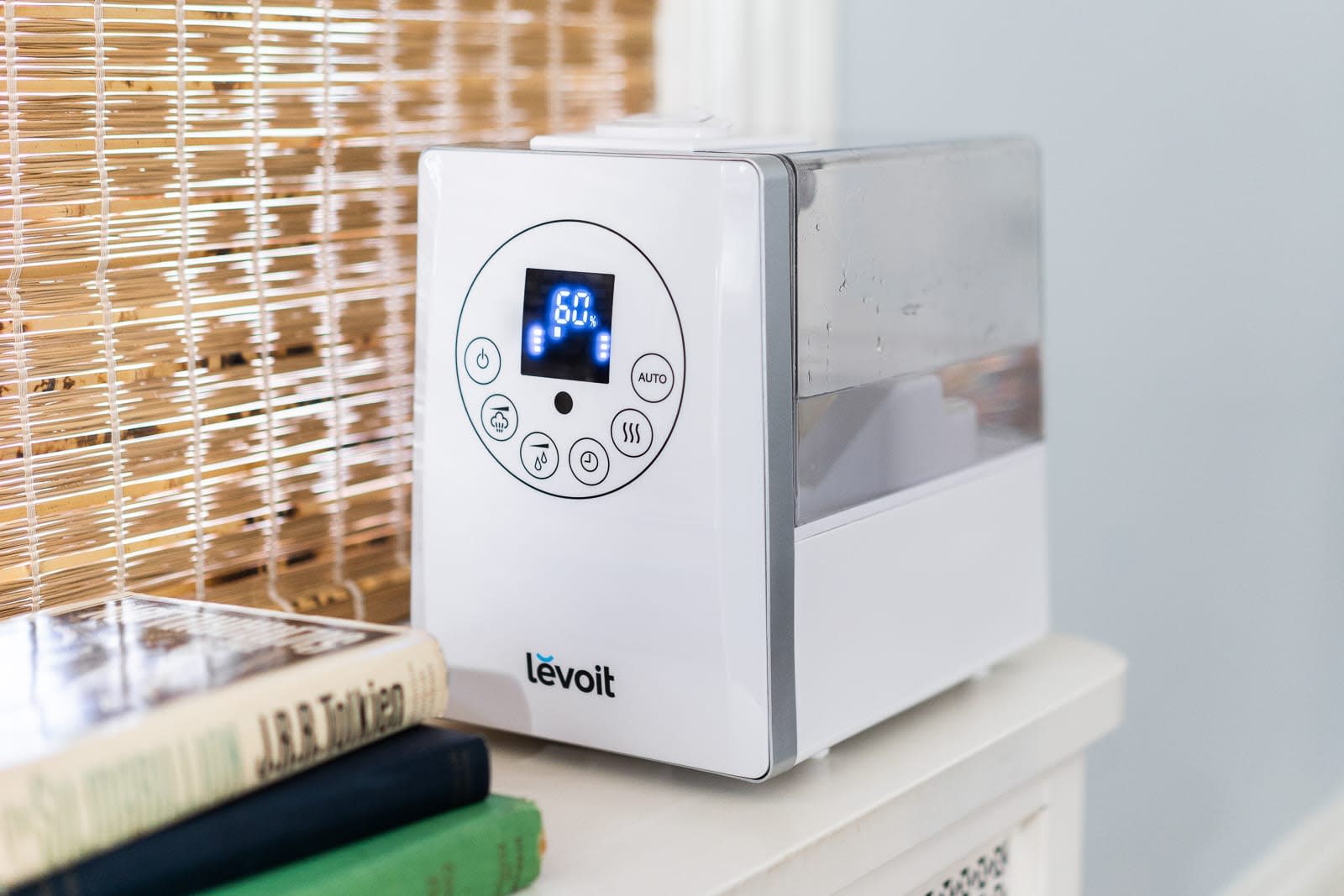 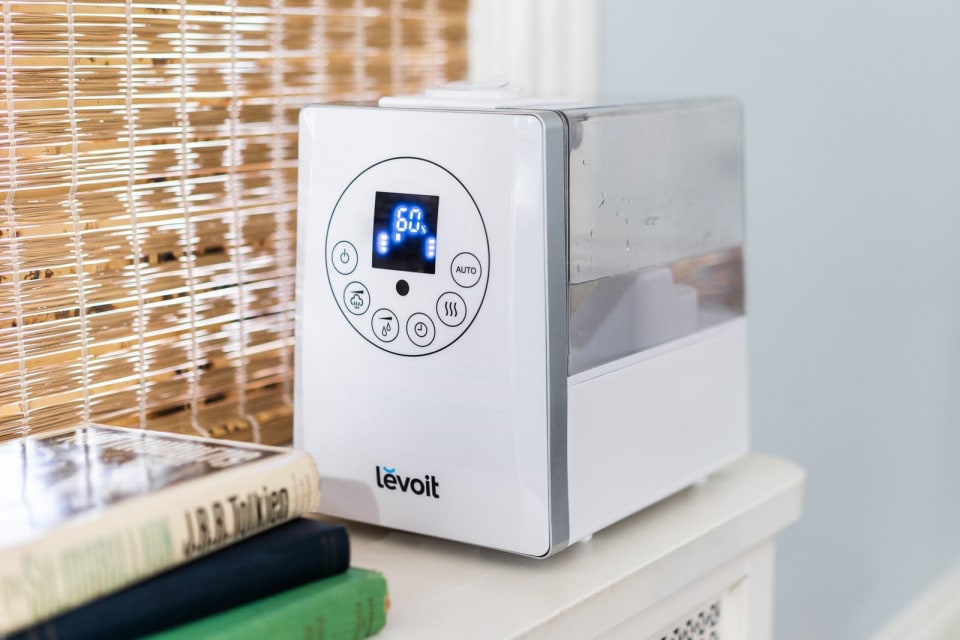 If you need to humidify a large space—like a living room or a workshop—we recommend the Levoit LV600HH, the upgrade pick in our main humidifier guide. It's an exceptional performer, period, but excels in a large space. Its powerful ultrasonic mechanism pumps moisture into the air much faster than its competitors, and its big 1½-gallon tank means that it can go more than 24 hours between refills.

The Levoit LV600HH is an exceptional humidifier and a great value. It was one of the top performers in our 2017 general humidifier test, becoming our upgrade pick, and it matched or outclassed the Dyson AM10, which costs more than four times as much (currently $400 versus $100 or less) in our head-to-head test. It's quiet, fast, effective, compact, durable, and easy to clean—plus, unlike many humidifiers, you can shut the display off at night. All of which you'll value in an appliance that typically lives in your bedroom, and that requires daily attention and weekly cleaning.

Humidifiers work by putting water into the air. Most, including our overall pick from Honeywell, feature a tank that holds a gallon or less. But the Levoit's tank is 50 percent larger, at 1½ gallons (6L), and that lets the machine run for longer between refills—more than 24 hours in some of our tests. This may sound like a minor point, but live with a humidifier for more than a few days and you'll come to appreciate a machine that needs less-careful monitoring of the tank's water level and fewer trips to the sink.

Equally advantageous is the way the Levoit works. It's what's called an ultrasonic humidifier, which means it uses a rapidly vibrating diaphragm to fling tiny water droplets into the air, where they evaporate and become water vapor. In a big space, ultrasonics like the Levoit have an edge on the other type of humidifier, known as evaporative. Evaporatives, including the Honeywell, automatically slow down as they raise the humidity. By contrast, ultrasonics pump out moisture at a constant rate. And the Levoit pumps it out quickly. In our tests, it put more than a pound of water into the air per hour—more than twice as fast as the Honeywell.

Why should you trust us?

For years, we've been testing humidifiers in controlled settings, as well as using them in our daily lives in real-world conditions. You can read our test methods, test results, and real-world observations in our guide to the best humidifier. But the main point is that by testing our picks in both a lab setting and in the real world, we've proven that our picks aren't just theoretical. They're practical. 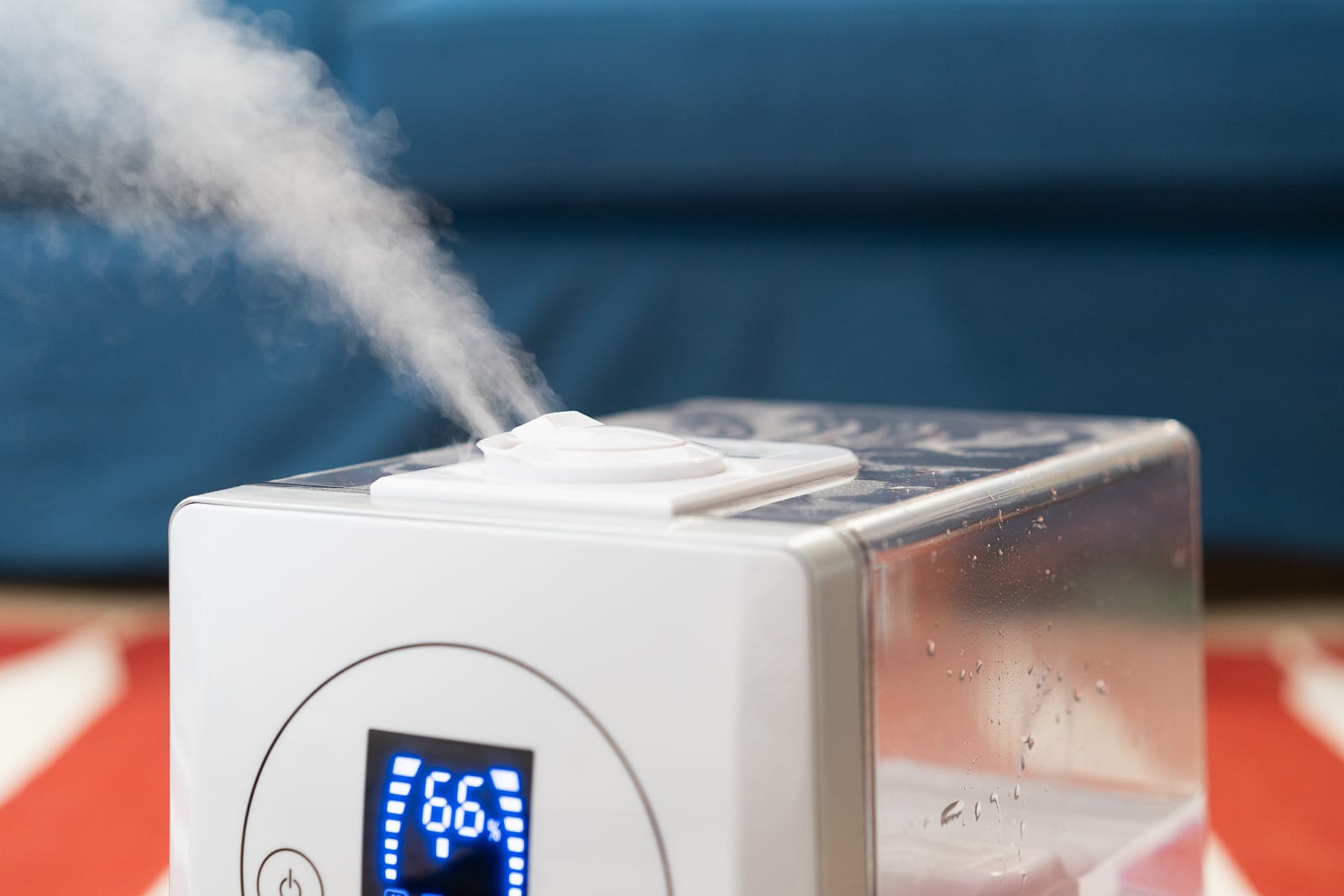 The Levoit LV600HH was a standout in our 2017 humidifier test, for its high performance, easy care and maintenance, and thoughtful design, including a display that you can shut off to help you sleep. In early 2018 we pitted the Levoit head-to-head against the much more expensive Dyson AM10 humidifier—and it equalled or exceeded the Dyson on every measure. In short, it's a flat-out excellent humidifier, whatever your needs.

When it comes to humidifying large spaces in particular, we especially like that the Levoit has an unusually large tank for water. At 1½ gallons, it's 50 percent larger than the tank on most humidifiers, including our 1-gallon overall pick from Honeywell. That means fewer trips to the faucet to refill it—a task that gets onerous after the fourth or fifth time, let alone deep into the winter humidifying season. 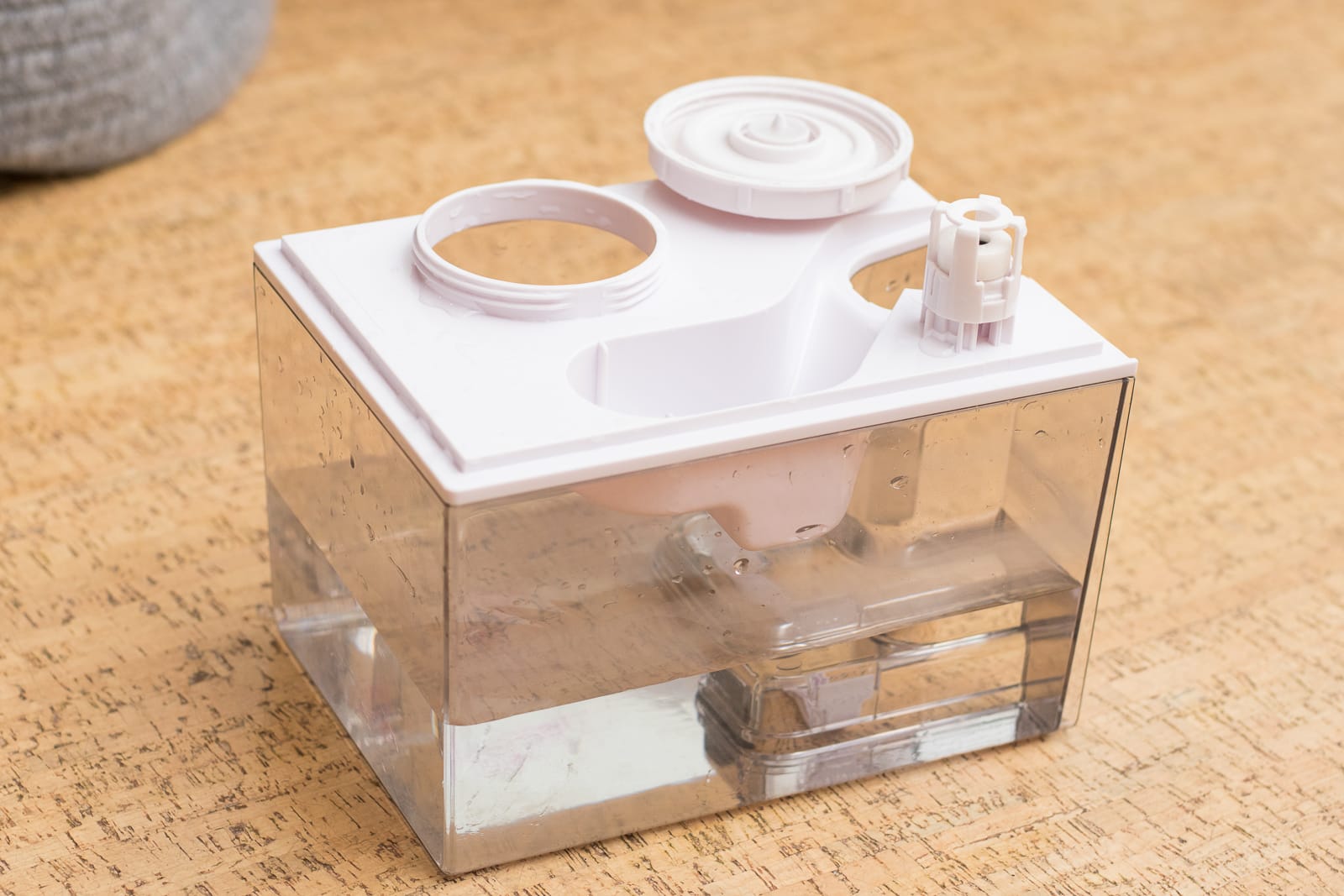 The Levoit's tank is larger than average, at 1½ gallons, and has 50 percent more capacity than most competitors', which helps it run longer to humidify larger rooms. Photo: Michael Hession

In our general humidifier tests, we found that the Levoit runs for more than 24 hours before the tank runs dry when set on medium. On high, it runs for at least 16 hours. Whatever setting you pick, that makes it easy to schedule refills: Once a day with the machine on medium, or morning and evening on high.

The Levoit is what's called an ultrasonic humidifier: It uses a rapidly vibrating diaphragm to fling tiny water droplets into the air, where they evaporate and humidify the room. It's a completely mechanical process, so whatever speed you set the machine on, it will throw that quantity of water into the air—whether the air needs more humidity or not. That can actually be a problem in a smaller space, where ultrasonics can oversaturate the air and create puddles around the machine, giving the self-limiting evaporative humidifiers a slight edge. But in a big space, ultrasonic humidifiers have the advantage. It's almost impossible to overhumidify a big, heated room. Instead, the difficulty is getting enough moisture into the air in the first place, so it's helpful to be able to set your humidifier to deliver constant, maximal output.

Those high-output tests are when the Levoit shines. In our testing, it put out a steady 12 ounces of water per hour when running on high. That's at least 15 percent more than any of the evaporative humidifiers in our test, and more than all but one humidifier of any type (the SPT SU-4010, a former ultrasonic pick with a smaller tank that the Levoit replaced).

Finally, setting the Levoit on high does not make it louder. Rather, it's virtually silent on all settings, though like all ultrasonics it does emit a low mechanical hum that you can hear if you're sitting within a few feet. Evaporative humidifiers, including our overall top pick from Honeywell, are effectively fans, and they do get louder the higher you set them. It's a white noise—many people, including the eight Wirecutter staffers who own a Honeywell, find it soothing for sleep. But in a living room, the silence of the Levoit is an advantage: It won't interfere with TV, music, or conversation.

We've covered nearly everything we have to say about this large-space pick, but if you'd like additional details about the Levoit, or more information about its performance compared with other humidifiers, read the details in our main humidifier guide. 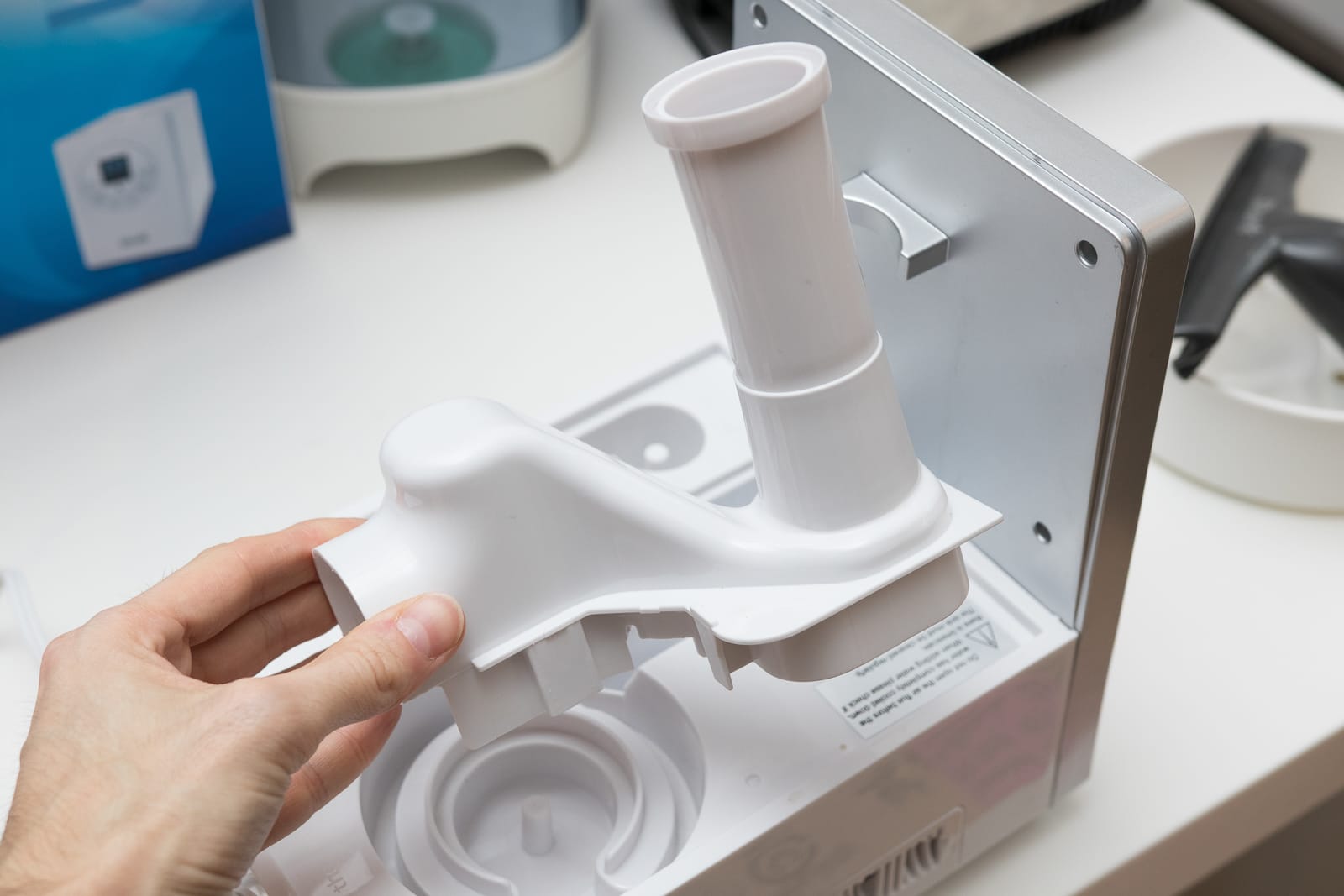 The Levoit's tank is larger than average, at 1½ gallons, and has 50 percent more capacity than most competitors', which helps it run longer to humidify larger rooms. Photo: Michael Hession

As with all ultrasonics, you have to place the Levoit on a table or shelf, to give the droplets time to evaporate before they hit the floor and puddle up. (Evaporative humidifiers, in contrast, can be safely placed on the floor.) Although the Levoit is very easy to clean, the base does have a number of nooks and crannies where gunk can accumulate. Also, unlike some other humidifiers, the parts of the Levoit are not dishwasher-safe. Read more about how to clean humidifiers in our short guide to the subject. And if you have more unanswered questions about this model in particular, here's a link to the Levoit LV600HH instruction manual (PDF).

In this article: gadgetry, gadgets, gear, home, Honeywell, humidifier, levoit, partner, syndicated, thewirecutter, ultrasonichumidifer, wirecutter
All products recommended by Engadget are selected by our editorial team, independent of our parent company. Some of our stories include affiliate links. If you buy something through one of these links, we may earn an affiliate commission.