One of the many potential use cases for augmented reality headsets like Magic Leap and Microsoft's HoloLens is collaboration in the workplace. Instead of using something like Skype or Slack to have your remote meetings, you could strap on a headset and chat with co-workers in a "face-to-face" setting. One company exploring this idea is Spatial, which created an office collaboration platform that not only lets you chat with colleagues but also manipulate virtual objects in 3D space.

Co-founders Anand Agarawala and Jinha Lee have prior experience with AR and 3D projects at companies like Google and Samsung and decided to build Spatial together a couple of years ago. "Most people in AR and VR are interested in gaming and entertainment," Agarawala told Engadget. "But what we're interested in was how would this transform the way we work, create, build and collaborate."

"We think the future of work will be increasingly remote and increasingly about sharing knowledge work," he continued.

Spatial certainly isn't the only company dabbling in this space. At LeapCon, Wacom announced it would make digital pens that artists and designers could use to collaborate on art projects in augmented reality. Microsoft has made its own remote AR collaboration tools too, like Remote Assist and Layout. It's no wonder that one of the companies that's most excited about Spatial is Microsoft, which apparently wants to use it in their HoloLens team meetings. Though AR is still slow to catch on in consumer circles, it's enterprise applications like this that could propel its popularity. Whether or not that will translate to the mainstream, however, remains unclear.

I tried out a demo of Spatial with Agarawala in San Francisco, while Lee called into the meeting from New York City. We were all wearing Microsoft's HoloLens, though Agarawala tells me that Spatial is actually platform-agnostic and could ostensibly work with any augmented reality hardware.

The way it works is fairly simple. You and your colleagues will put on augmented reality headsets like HoloLens or Magic Leap, access the Spatial app, and begin collaborating. If you're starting it up for the first time, however, you'll want to create virtual avatars of yourself so you can pretend you're talking in-person.

The avatar idea is similar to the ones used in Facebook Spaces or Oculus Avatars, but Spatial decided on a simpler approach. Instead of having you plan out exactly the kind of facial features you want, all Spatial needs is a 2D photo of you, and through some artificial intelligence and face scanning, it'll transform that flat image into a 3D avatar. 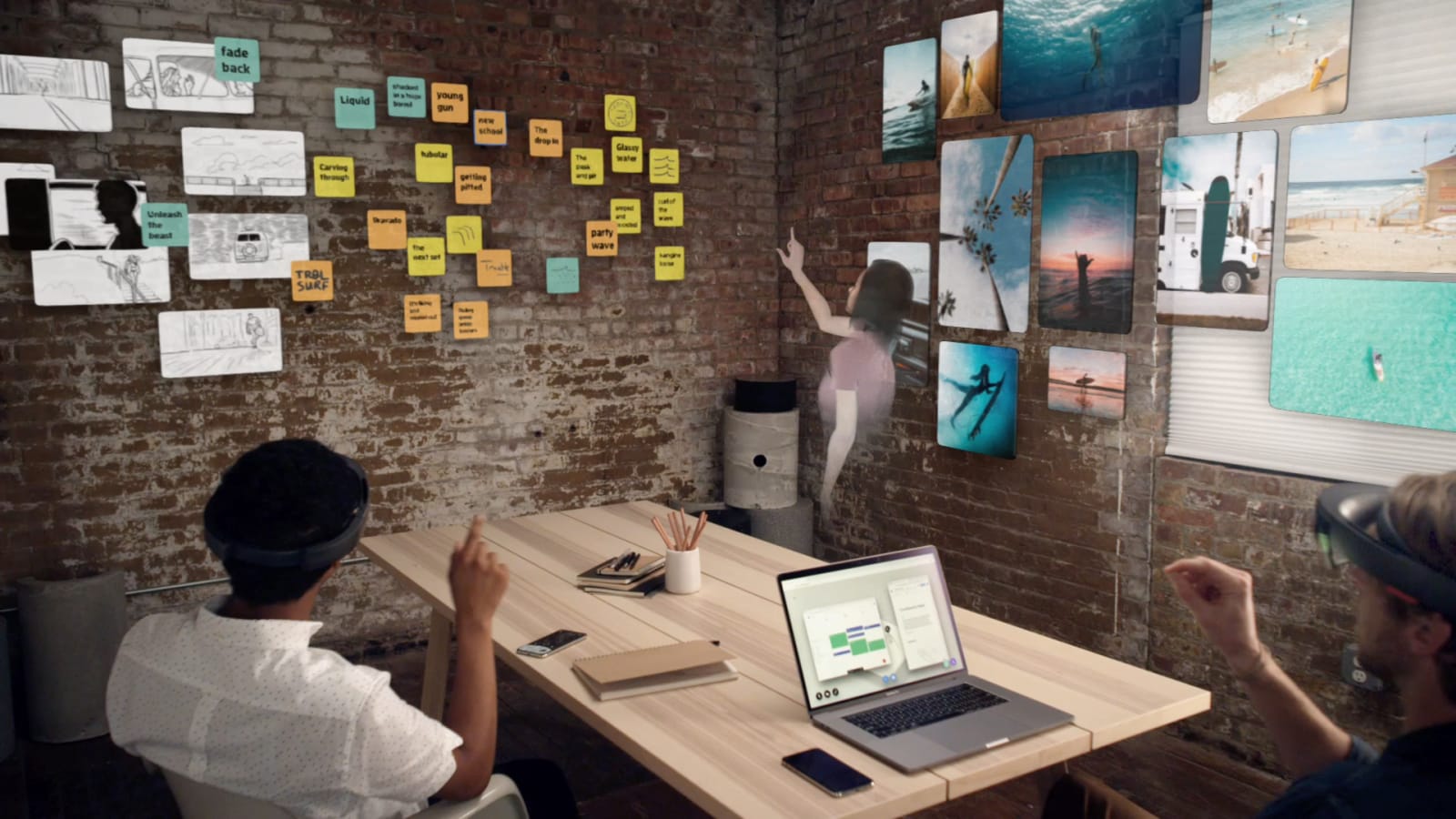 The results can verge on the uncanny valley. I was a tiny bit weirded out by my Spatial avatar, which Agarawala created by taking my Twitter profile photo and turning it into a three-dimensional moving image, complete with eyes that blinked and a mouth that moved whenever I spoke. Agarawala's and Lee's avatars seemed to be a lot sharper and well-rendered because they actually had their faces 3D-scanned, versus mine which was taken from a 2D image.

"We experimented with cartoony avatars before," said Agarawala. "But it didn't really scale. For one thing, we wanted Spatial to be used in enterprise settings, and cartoon avatars don't set the right mood. Plus, who's going to bother picking out a hairstyle, the right nose, the right eye shape etcetera, just for a meeting?"

I also found that in a project collaboration space like this, having perfectly rendered 3D avatars wasn't a huge concern for me. I was a lot more focused on what Agarawala and Lee were presenting rather than if their mouths were moving properly. 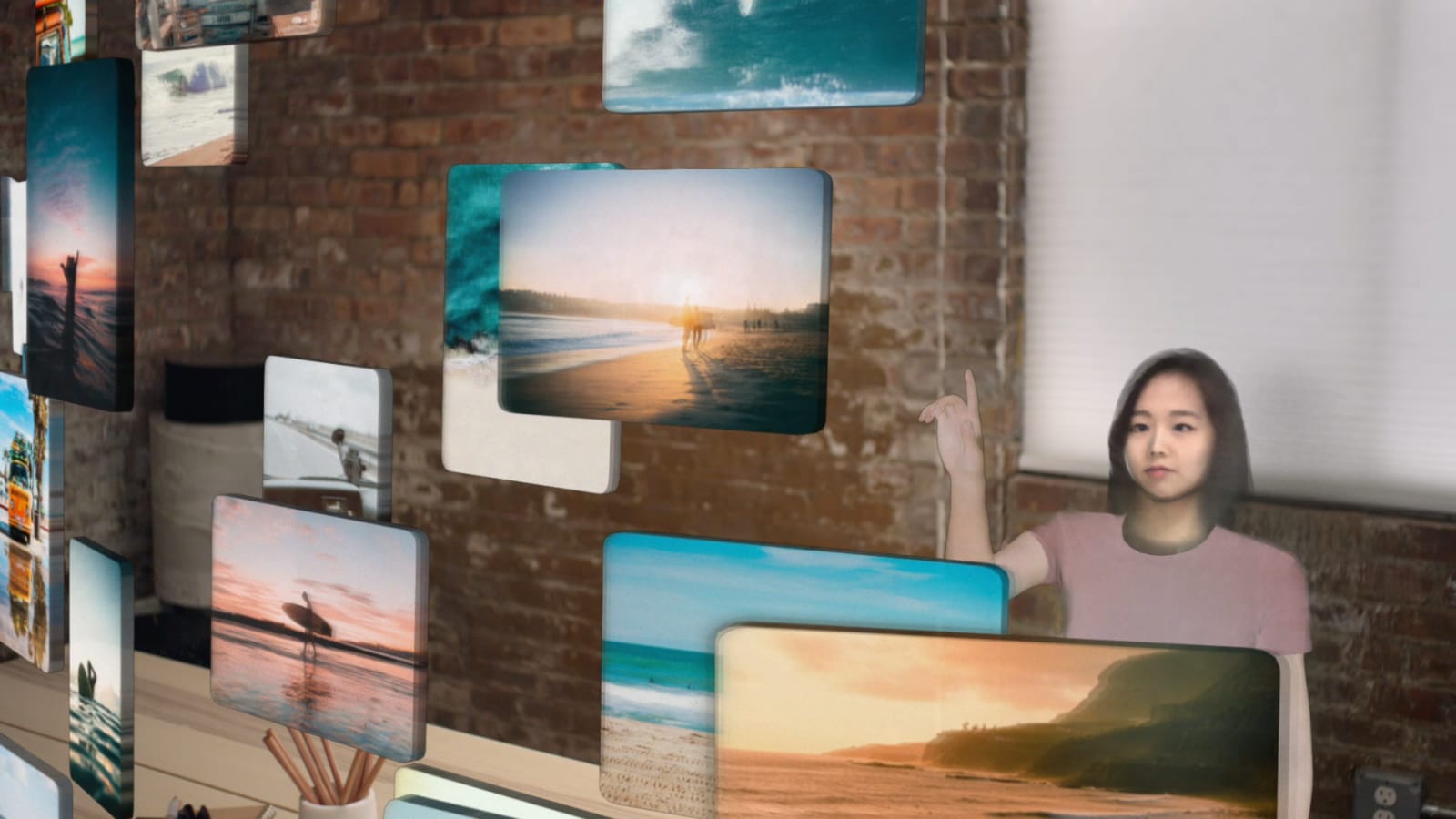 One way you can collaborate in Spatial is by creating a shared project board. To do so, Agarawala mapped out an empty wall, and Lee did too in his own space. The wall then became a virtual scrapbook of sorts where any of us could start pinning images. He dragged in a few photos he had stored on his phone, which we then moved and pinned onto the board as we saw fit. Lee contributed a couple of different images as well, including a selfie he took with his phone. You can resize any of the photos, add sticky notes to the environment, and just place them in different positions.

What I thought was intriguing was that Agarawala was able to search for things on the web directly from the HoloLens and brought image results into the augmented reality environment by simply dragging and dropping.

For example, Agarawala searched for "Oculus Go," and Bing Images returned a slew of different photos of the portable VR headset, along with a 3D model. Spatial pulled it up from poly.google.com, a 3D model database. "We used Spatial's ThoughtFlow gesture to allow you to say words and then have them visualized before your eyes with images from the internet and 3D models from Google Poly." He then dragged and dropped that 3D model of the Go onto Lee's head, to make it look as if he was wearing it. 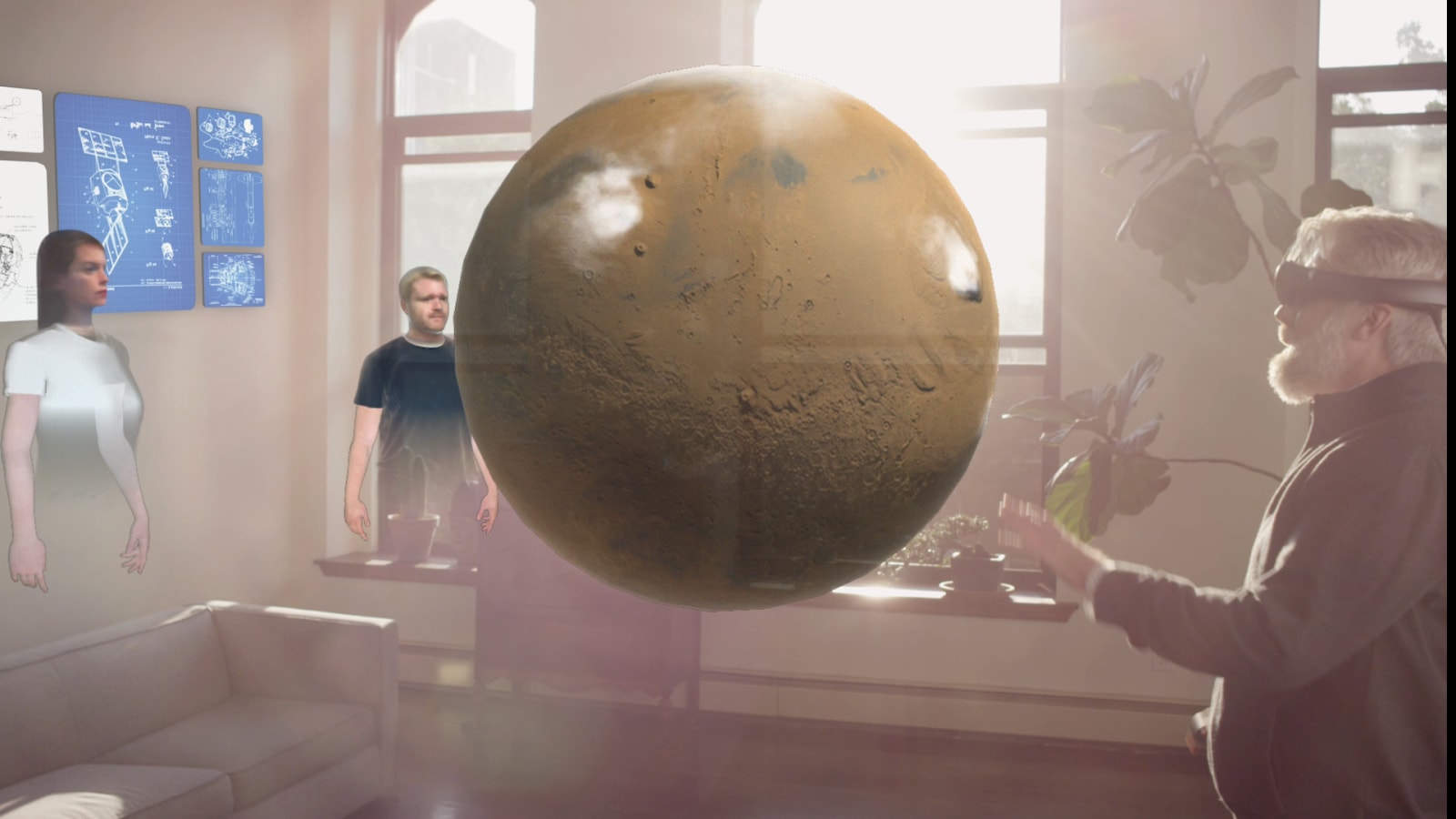 According to Agarawala, NASA is interested in using Spatial for planning Mars-related projects. He showed me a sample Mars layout, where the room was decked out with a virtual rover, digital red planet terrain and various documentation and notes floating around it.

Throughout my demo, I could still see Agarawala face to face, and he could still access his laptop and his phone, even though we still had our HoloLens headsets on. As Lee's avatar walked around the room, I almost felt like he was there thanks to HoloLens' spatial audio effects which made it seem like his voice came from his direction. That, Agarawala said, is the power of augmented reality. He said that with AR, Spatial is a project collaboration tool that combines FaceTime, Skype, Google Docs and Slack in a single environment. 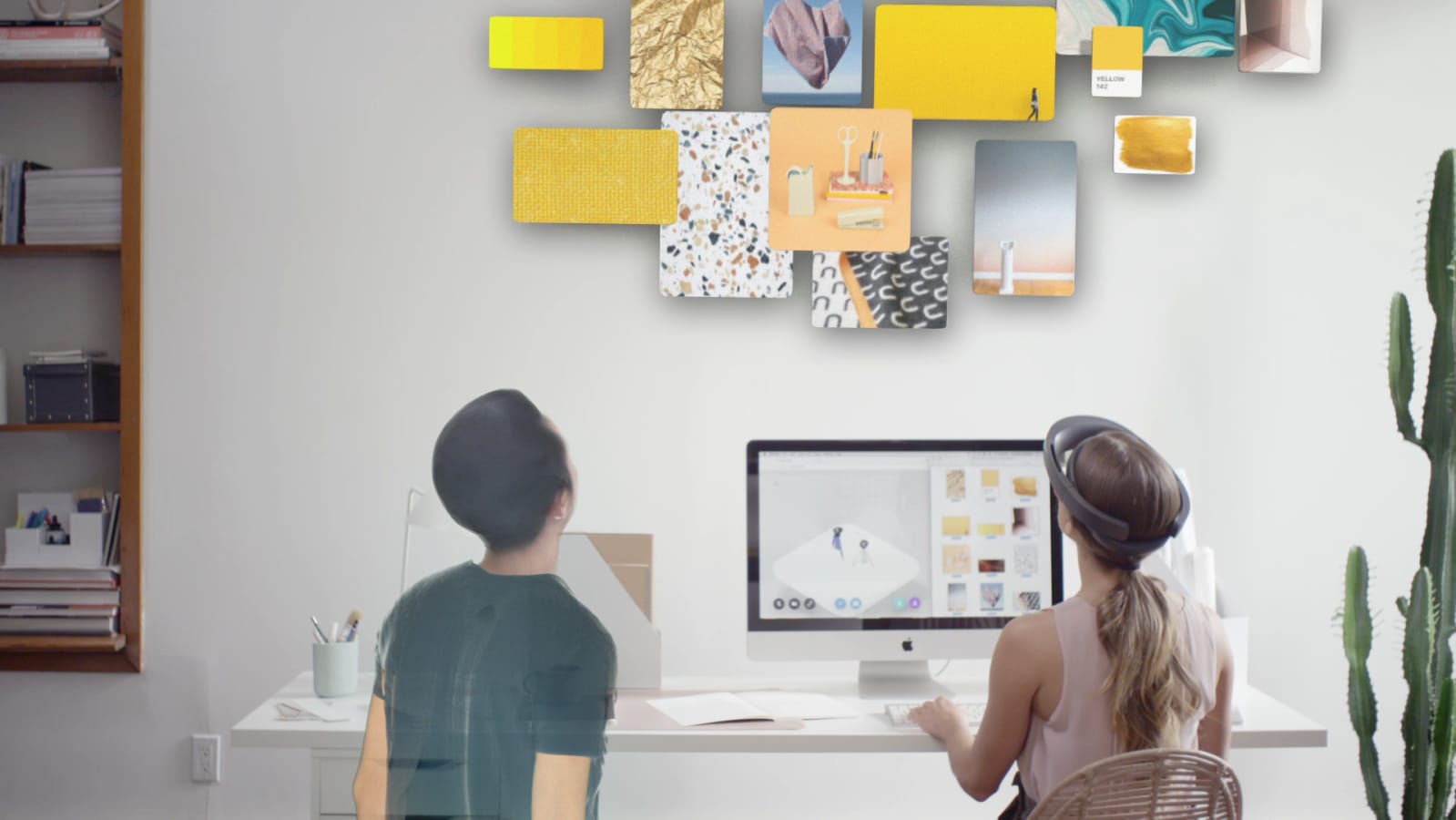 "We were doing VR first," said Agarawala. "But meetings are better suited for AR. We can still have eye contact, we can still use our computers and phones, we can still scribble in real-life whiteboards, and be engaged in the real world." When I pointed out that AR still has the problem of a limited field-of-view, Agarawala said that in a meeting environment, a limited FOV isn't that bad. "It's a temporary issue," he said, adding that Magic Leap has already doubled the viewing area and that augmented reality tech is progressing at a rapid pace.

Developers can't download Spatial to test it out just yet, as the company is still rolling the platform out with certain key customers like the aforementioned NASA and Microsoft. But this is just the beginning of Spatial's journey, and it could very well be available for other enterprise customers in the future.

"With Spatial, we are moving from the era of personal computing to spatial computing," said Lee in a statement. "People can share their space and ideas from anywhere, on any device."