Magic Leap in the living room: Alone together

He's standing in the hallway, graphite-colored goggles strapped to his face and a small, circular computer sticking out of his front pocket. He laughs as the distant sounds of explosions and screams echo around his head.

"I wish you could see it, too," he says, before crouching down to get a better angle on an inconspicuous bare spot on the floor. He twists and pulls back the hand holding a motion controller, then lets the trigger go. The quiet crashing sounds resume and he stands up, smiling. "Got it." 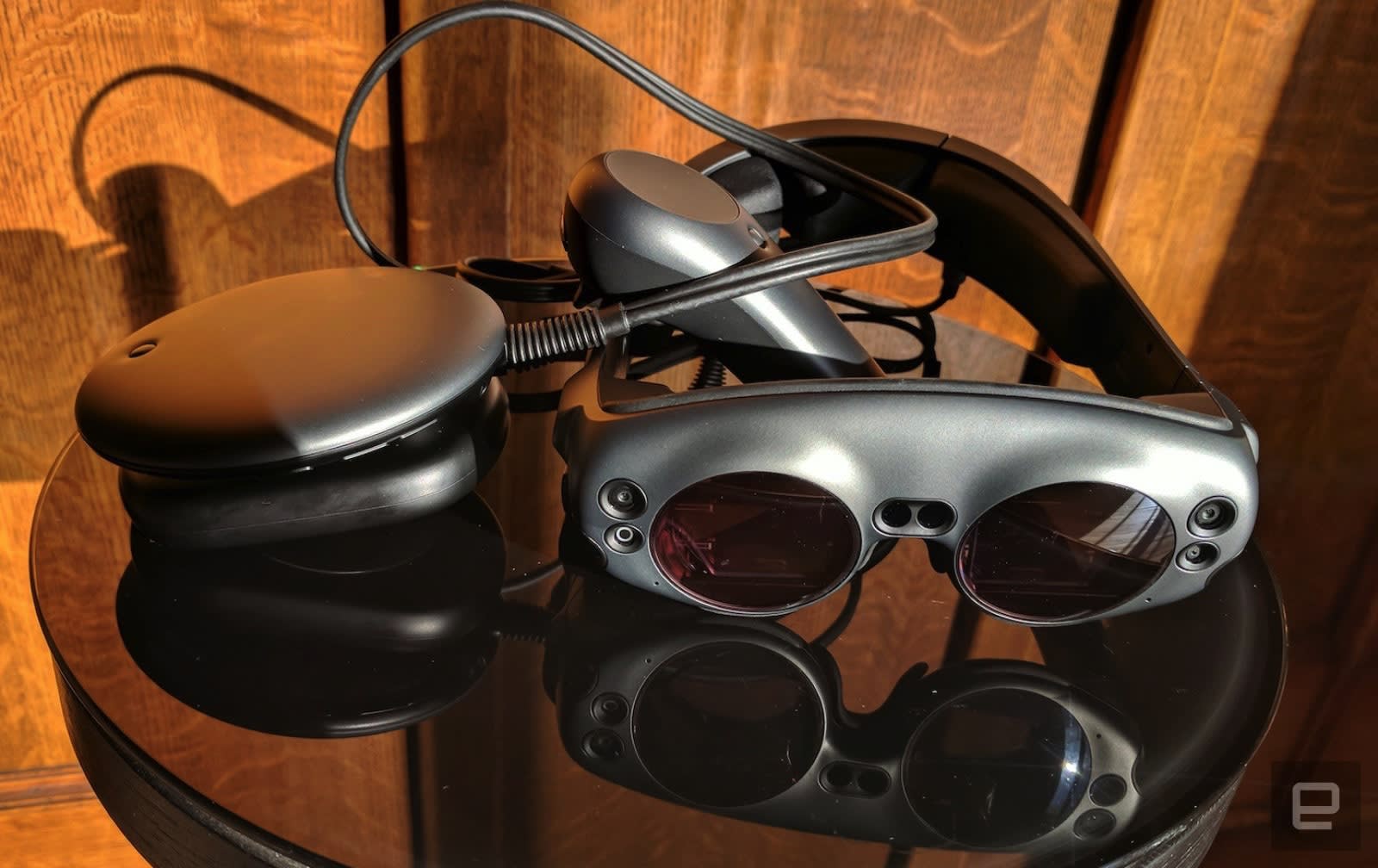 I'm leaning against the back of the couch, imagining what he's seeing projected onto the living room floor: Rickety wooden towers and crates of TNT falling to the the ground, taking a crew of tiny green pigs with them. His hand is a slingshot and tiny red birds follow him around, lining up to be flung into the swines' structures. All I see are slats of wood and a stubby gray wand in his hand.

"Good job," I say as he lines up another shot.

The Magic Leap One Creator Edition is a $2,300 mixed-reality headset that's claimed to be an early leader in the industry, promising to add rich layers of interaction and entertainment to users' physical spaces. A $542 million cash infusion from Google in 2014 made Magic Leap an everyday name in the tech world, but the company operated in secrecy for a few years. Meanwhile, executives released concept videos promising the seamless AR future that Hollywood and sci-fi futurists have been beaming into our psyches for decades.

Two years into Magic Leap's mysterious development process, reports began emerging that the hardware itself wasn't nearly as capable as advertisements had led folks to believe. Executives brushed off the criticism, and last December, they debuted the Magic Leap One Creator Edition, a headset that was far from fashionable, but at least it didn't look like a wire-studded backward fanny pack any longer.

Magic Leap started shipping the One in August, though in limited quantities and only in six cities. This iteration is designed for developers and as a barebones proof-of-concept; it's not ready for the mainstream consumer market just yet.

That said, the Magic Leap One stands up well to other mixed-reality headsets, notably Microsoft's HoloLens, and it even features a slightly larger field of view than that particular device. The goggles and power pack are solid, and the touchpad-enabled, motion-sensing controller performs smoothly.

However, there's no avoiding the fact that AR is in its infancy, and the Magic Leap One demonstrates how far that technology has to travel. Even the basics of AR are still up for debate, including what home pages and menus should look like, or how people will interact with the software. The Magic Leap UI relies on screens, a concept that feels ridiculously outdated while wearing a mixed-reality headset. AR is meant to integrate digital tools with your physical environment, so why does this system rely on a format designed for stationary, flat interaction?

Magic Leap's strength lies in its potential. The One is most impressive when it scans your home for the first time, overlaying everything you own in a light blue grid, catching the details in a bundled up blanket or a sleeping dog. When the entire space looks like a holographic room, the untapped power of mixed reality truly sets in -- now, this room can be anything. The possibilities are clear and endless. They're just not here yet.

Magic Leap is working on better software; that's a given. However, that's not the only major issue that developers will have to contend with, when it comes to driving headset adoption. If AR is going to take off in the mainstream consumer market, it has to be a shareable experience. Using the headset at home only emphasizes this point. 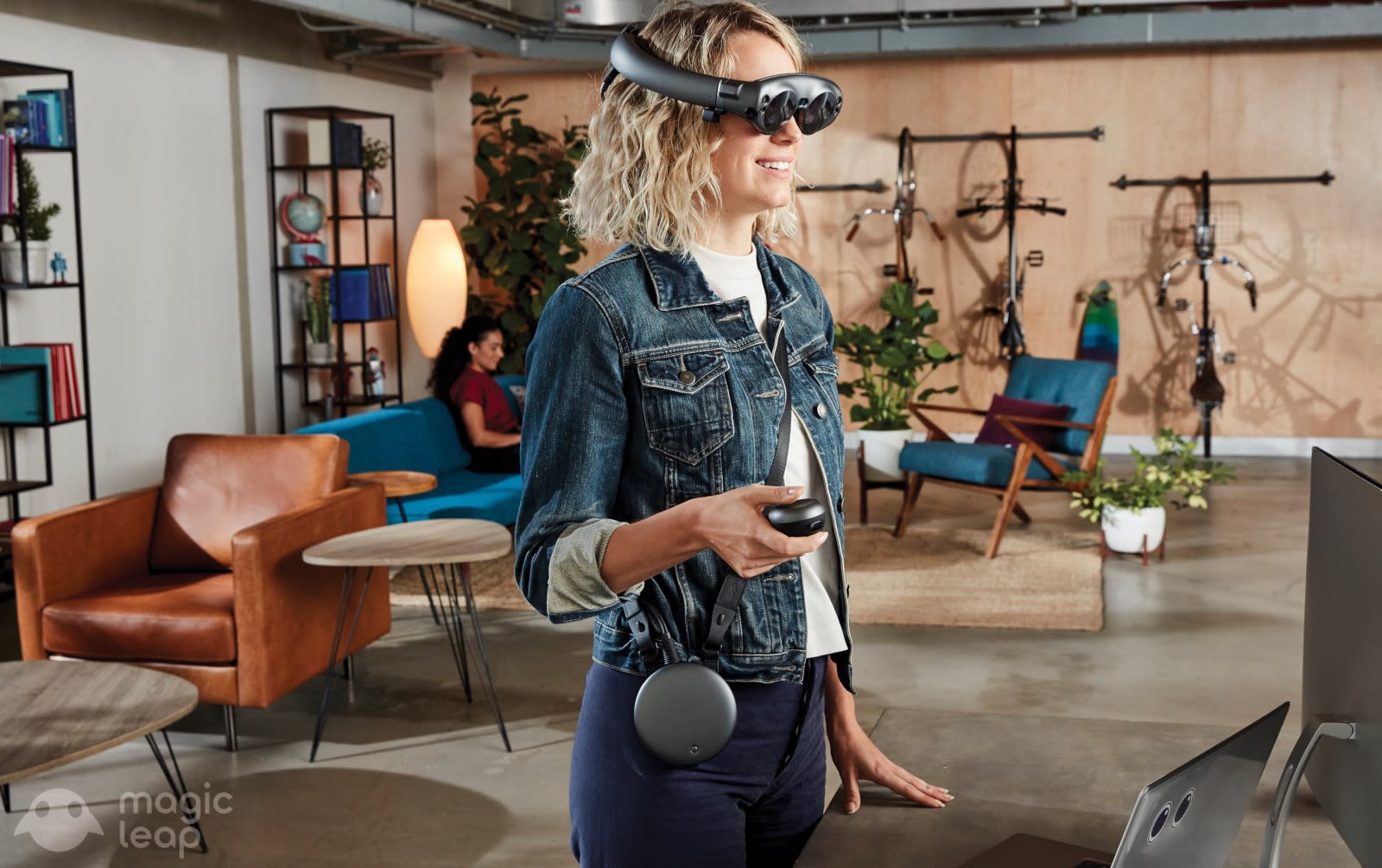 "I wish you could see this." My partner and I parry this phrase back and forth as we take turns with the Magic Leap One, playing Angry Birds or adding tiny T-Rexes and UFOs to the living room. It's fun and we each can't help smiling whenever we strap the goggles on, but there's a clear disconnect between us. I feel silly yelling at the little green pigs that he can't see; he puts a sticker of a rainbow clown wig on our dog and laughs, but I just see an adorable sleeping pup.

If we can learn anything from the explosive popularity of online video games, streaming, social networking and even the Nintendo Switch, it's that a lot of consumers want something they can play with family members and friends. No one wants to laugh alone.

A see-through headset is just as isolating as a blacked-out visor.

Without creating shared experiences or solving the issues of a single-viewer system, mixed-reality headsets can only go so far. Virtual reality has a similar problem, though it's possible to stream or display VR content on a traditional screen in real-time, inviting others to participate in the fun. There's currently no comparable solution for AR headsets. AR is pitched as a more natural and open version of VR, since it embraces the physical world rather than blocking it out, but in action, a see-through headset is just as isolating as a blacked-out visor.

Social acceptability is a major factor for any emerging technology (RIP, Google Glass), and AR will grapple with this fact more than other recent devices. Cell phones, tablets, laptops and computers all operate on the same baseline (a screen and some kind of keyboard), but AR forces developers to reimagine the way we interact with technology. No one -- not even Magic Leap -- is sure what this future will look like, but one thing is certain: AR will only get better once everyone can see what it has to offer.