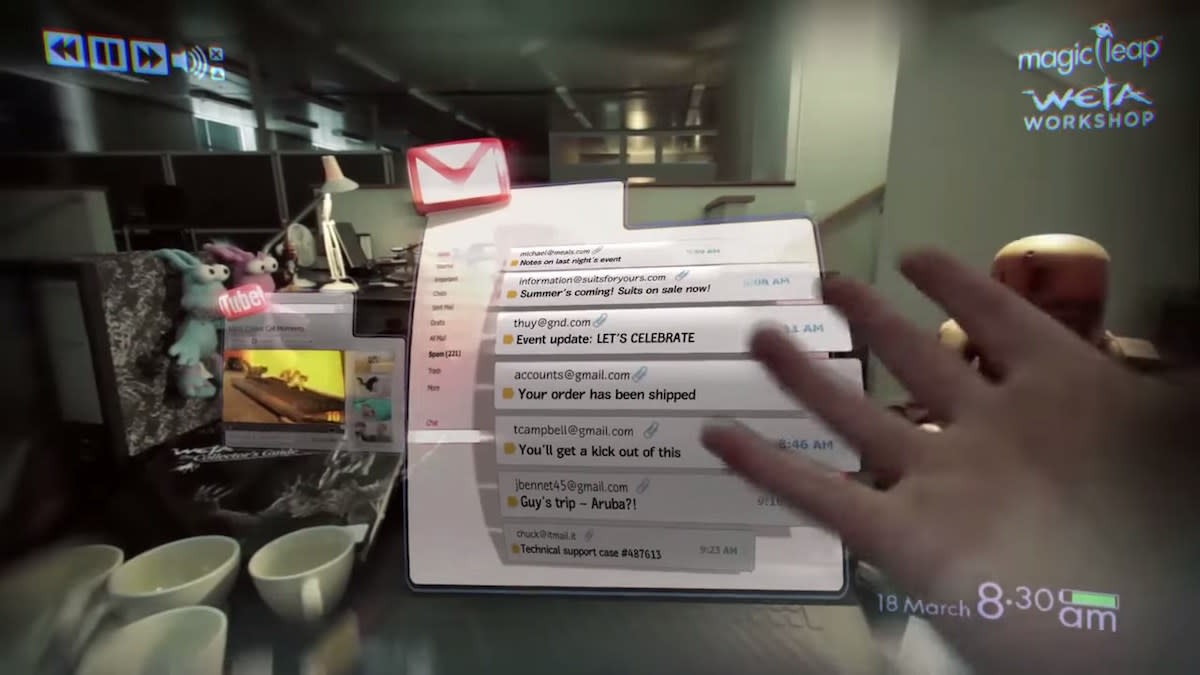 Over the last couple of years, we've repeatedly heard a lot about Magic Leap's supposedly advanced augmented reality tech, but have seen very little. In 2014, a half-billion dollar round of investment that included Google ratcheted up the hype and it has not slowed down since. Now, The Information is reporting, based on sources and a hands-on demonstration, that the reality hasn't lived up to all of the promises yet.

First up is Magic Leap's jaw-dropping demo video from last year, which appeared with a caption indicating it was "just another day in the office" and an example of a game the company could play. According to The Information, however, there was no such game at that time, and the mockup video was created entirely with special effects. That said, the video prominently features a WETA Workshop logo and, unlike more recent, fuzzier videos, does not claim to be recorded using Magic Leap's actual technology.

What is worrying, however, is that apparently the company's patented fiber-optic technology isn't working well enough for use in a wearable mixed-reality device and has been shelved for now. Because of this, The Information says it's using different, otherwise unspecified technology to get its experience from the current helmet-sized prototype to something that will fit on a pair of glasses. While CEO Rony Abovitz reportedly showed a prototype compact "PEQ" device, it wasn't turned on and he did not share details of the technology.

Since we still haven't seen it, and there's no window for a release, it's hard to say what the technology will or could look like when we see it. Still, it could be a tall order to surpass actually-shipping mixed-reality tech like Microsoft's HoloLens, no matter how expensive and rare it is. A Magic Leap demo video from April arrived alongside an in-depth profile of the company specifically noting "Shot directly through Magic Leap technology on April 8, 2016 without use of special effects or compositing," and we're sure everyone will be watching to see if future releases live up to what has been shown.

In this article: AR, augmentedreality, gadgetry, gadgets, gear, MagicLeap, MixedReality, video, WetaWorkshop
All products recommended by Engadget are selected by our editorial team, independent of our parent company. Some of our stories include affiliate links. If you buy something through one of these links, we may earn an affiliate commission.