The single-serving, pod-based cocktail maker was built in partnership with AB InBev.

I have seen countless companies claim to deliver the Keurig of (fill in the blank). The "Keurig of cocktails" market in particular is crowded with wannabes that don't seem to be gaining much traction -- Barsy, Bartesian, Somabar, Bibo... am I missing any? But now there is a company building a literal Keurig for cocktails. Drinkworks is a joint venture between the single-serving coffee pod giant and Anheuser-Busch InBev (AB InBev), and it's building a familiar-looking machine that mixes up cocktails using disposable pods. If anyone can build the Keurig of anything, well, it's got to be Keurig itself, right? The insanely deep pockets of AB InBev certainly don't hurt either.

Physically, the $299 Drinkworks Home Bar isn't terribly different from a Keurig K Cafe espresso maker. It's a slightly bulky black and chrome box with a water tank and a spout for dispensing your beverage. Inside though, things are a little different. Instead of heating water, the Home Bar cools it. And inside the chilled water reservoir is a separate carbonation tank, fed with CO2 from a disposable canister.

But the operation is basically the same. You take a pod, put it in the dispenser, close the lid, hit a button and in a few seconds you've got an alcoholic beverage of your choice. And Drinkworks is launching with an ambitious lineup of 24 different beverages that includes beer, cider, sangria and over a dozen mixed drinks.

Basically, each $4 pod contains a concentrated version of whatever the ingredients are. For example, in the case of the Old Fashioned, that includes cask strength whiskey, concentrated bitters and some simple syrup. The machine reads a code on the pod that tells it to make an Old Fashioned. That means a short pour (less water) with no carbonation. If you inserted a Gin & Tonic pod, on the other hand, it would add carbonation and more water. 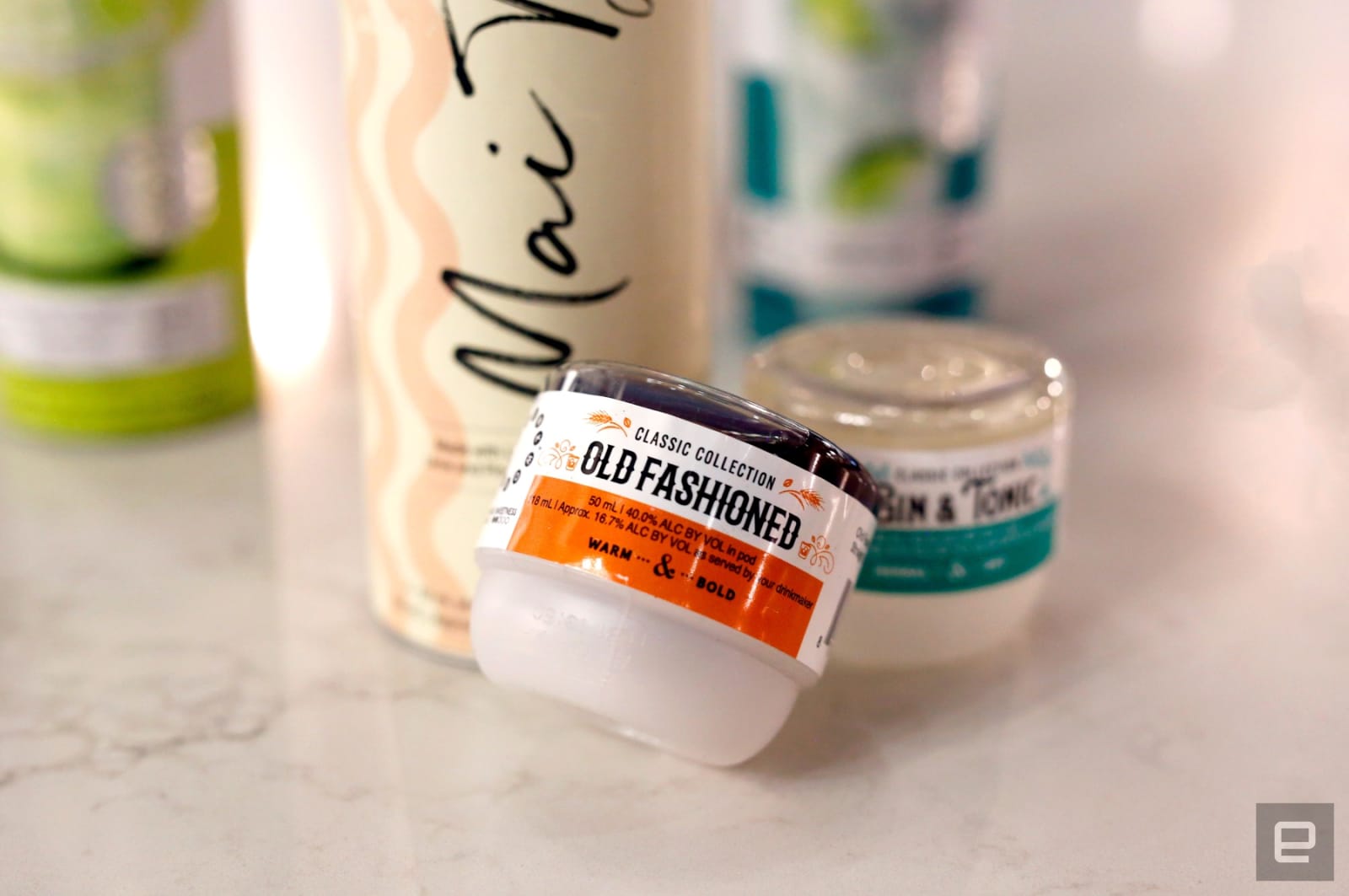 It all happens very quickly and the machine is incredibly intuitive. It's basically fool proof. It will tell you what size glass to grab, when you're running out of water or CO2, or if it needs to be cleaned. There's even an app that pairs with the Home Bar over wifi where you can easily track these things and order more pods when you run out.

Obviously the big question, though is, how does it taste? And here's where things get a little more complicated. I had an Old Fashioned and Moscow Mule: Both were perfectly serviceable, but neither was great. The Old Fashioned was a little sweet for my taste and the Moscow Mule definitely would have benefited from being made with freshly squeezed lime juice instead of a concentrate. But I've also been served much more offensive things at a bar and paid three times as much as Drinkworks is charging. (What kind of monster muddles both a cherry and an orange in the bottom of an Old Fashioned then tops it off with seltzer?)

But also I have to acknowledge the Home Bar just isn't for me. And if you're particular about your cocktails it's not for you either. There simply isn't much you can do to tweak these to fit your taste, short of just adding more booze after the fact. This is for a casual cocktail fan who maybe throws the occasional dinner party. It's for the kind of person who always orders a Margarita at the bar, but can't be bothered to make one at home.

Frankly, for something as simple as a Gin & Tonic or even an Old Fashioned, the Drinkworks Home Bar just doesn't seem to make a lot of sense. (If you can't be bothered to open a bottle of tonic and pour it over ice with gin, then you should probably just stick to beer anyway.) But for something more complicated like a Mai Tai, which generally has five ingredients, it's a little bit more of a time saver.

Unless you live in the St. Louis area though, you'll have to wait a little longer to give the Home Bar a go. The company is launching its pilot program there with preorders starting today, for a November 19th launch. If all goes well, expect Drinkworks to expand availability in 2019.