I don't know about you, but I have a love-hate relationship with my microwave. I love how convenient it is, but hate that I rely on it so much. And, full disclosure, one time I managed to accidentally blow one up. Yeah. That's a story for another time.

Regardless of how I feel, the microwave is a staple in our kitchens, and it hasn't changed much since its introduction in 1946. You pop your food in, set the timer, then hit start. Pretty simple. But Amazon thinks it can make the process even simpler with the $60 AmazonBasics microwave. Its headline feature is Alexa voice control, which seems a little silly. How much harder is it to press a few buttons instead of saying "Alexa, heat up my soup?" Well, Amazon feels it has more than minor conveniences to offer.

To be clear, the AmazonBasics microwave doesn't have a built-in mic to hear your commands -- you link it to an Echo device like a Dot or a Plus.

That sounds complicated, but Amazon's implemented something called WiFi simple setup. It uses your Amazon ID to connect to your home network so you don't have to reenter clunky passwords and you can connect everything via the Alexa app. Once you're done, you can get to the fun, hopefully yummy, part.

I put some leftover lunch into the oven and asked Alexa to "microwave one dinner plate," which is one of about 30 presets at launch. Normally, I'd put that in my microwave on high for about a minute and a half. Alexa set a timer for six minutes, though, which gave me a lot of anxiety about whether the food would blow up. I might have some PTSD. 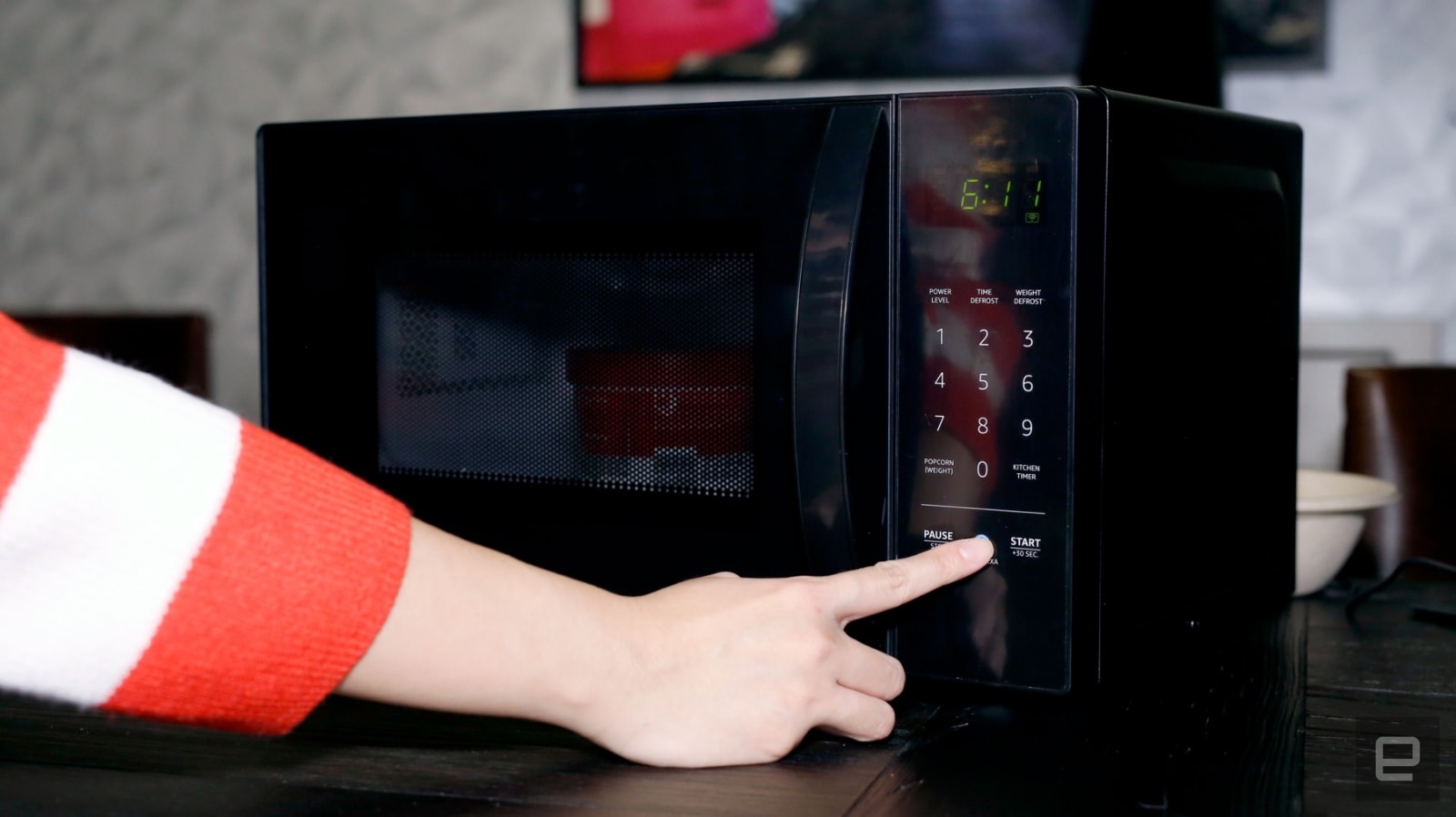 Thankfully, the microwave was able to manage its power, and I heard it humming on and off as the turntable spun. Because I don't usually sit around next to my microwave as it heats food up, I'm not certain if this is what they all do. However, I was impressed that the Amazon Microwave served up a perfectly warm plate of food that was heated through evenly.

I had a similarly pleasant surprise with a cup of tea that had been sitting out. Since there isn't a preset for tea yet (my British colleagues aren't pleased about this), I had to ask Alexa to "reheat a cup of coffee" instead. Still, the result was a hot beverage that was warm enough to soothe my sore throat but not so hot it scalded me.

I was definitely impressed, but really, all Alexa did was save me from having to think how long to heat my food up for. I do have a tendency to overheat my food, so... maybe this will save me from burning the roof of my mouth?

There is something to be said for not having to do math yourself. Alexa can save you from trying to figure out how long to defrost 8 ounces of chicken for. Or you can just say "cook 6 ounces of oatmeal" and it'll figure out the time for you.

The most common thing people cook in a microwave, though, is popcorn, and Amazon believes you'll be popping so much that there's a dedicated feature for ordering more. If you're a big popcorn eater, this is pretty useful (or dangerous). You start by telling the app how many bags of popcorn you have, and set how much you want to reorder when you run out. The Microwave keeps track of the bags of popcorn you've popped and automatically orders more when you run low. But it's basically just Amazon Dash. 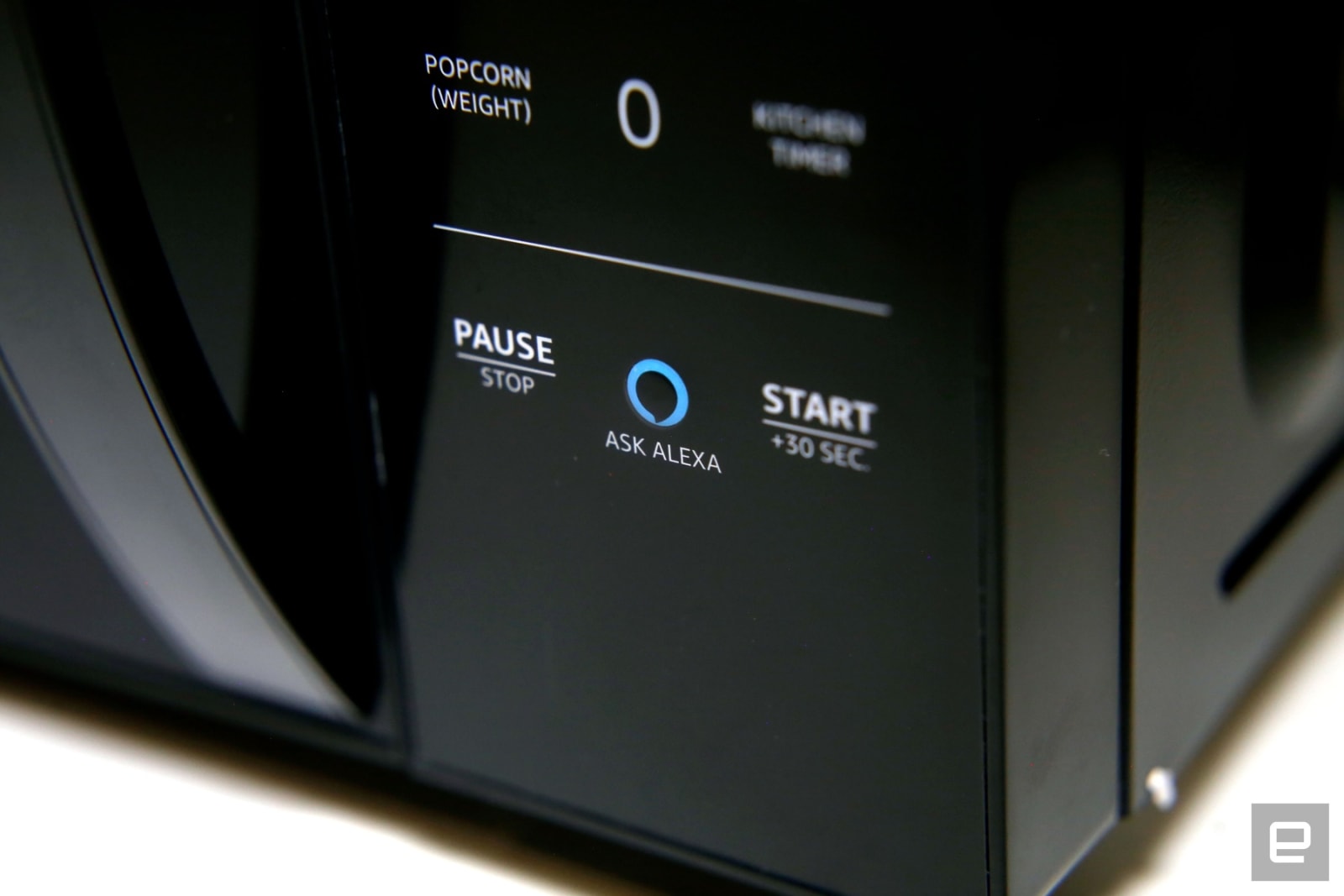 You can also manually reorder popcorn via the app or by asking Alexa. Speaking of, you don't have to say "Alexa" when you want to get the Assistant to listen -- you can also press the Ask Alexa button on the microwave itself. I don't really see the point of this button because if you can't SAY "Alexa," you probably can't speak your next command. But hey, it's there in case you can't wait to finish chewing first or if your Echo is on mute because your roommate's name is Alexa.

So far, Alexa's proved to be a capable chef and timer setter, but not much else. The company said more voice presets will be added over time, and there are about 30 now, so Alexa in a microwave should get more useful. I'm not sure the AmazonBasics oven is any more convenient than a regular microwave. But at just $60, the Amazon Microwave is much cheaper than Alexa-enabled options by GE, Whirlpool or Kenmore, which are at least twice the price. Plus, they're not much smarter. The AmazonBasics Microwave is basic, but it's an affordable way to introduce a connected appliance to your budding smart kitchen.