RetroStone brings the '90s back to life.

The recent spate of retro "classic" consoles might be switching a new audience on to vintage games, but some of us never left them. For most, a $60 - $100 machine with a few flagship titles on it is probably enough to scratch the itch, but Managing Editor James Trew has a much deeper itch: to play retro games on the go without someone choosing the library for him. Much to the bemusement of the rest of Engadget, I have a fetish for the Atari Lynx, of which I own many, and of course, every game ever made for it. So, I already have a portable with all the games I love, why would I want another one? Because logic does not apply here. But if it did, it would be because what was considered portable in 1990 isn't really pocket-friendly now. Much as I love the Lynx, it's cumbersome and guzzles batteries like an electric Cookie Monster. I decided to search for something, sleek, modern, and flexible (in case I want to enjoy other platforms too). To my surprise, there's not a lot of off-the-shelf solutions that meet my weird, specific requirements. (Ok, maybe I shouldn't be surprised.)

The problem seems to be that retro handhelds come in a few different categories. There are portable "classics" which suffer some of the same problems as their living room counterparts (limited games and no flexibility). There are some that play original cartridges for various systems, but that just seems impractical. Then there are the murky unlicensed knock-off machines on Amazon. I actually bought one of these for comparison (more on that later), but needless to say they're kinda shoddy, and who wants to play the classic Mario 14 or a sketchy Angry Birds NES port? Not I. 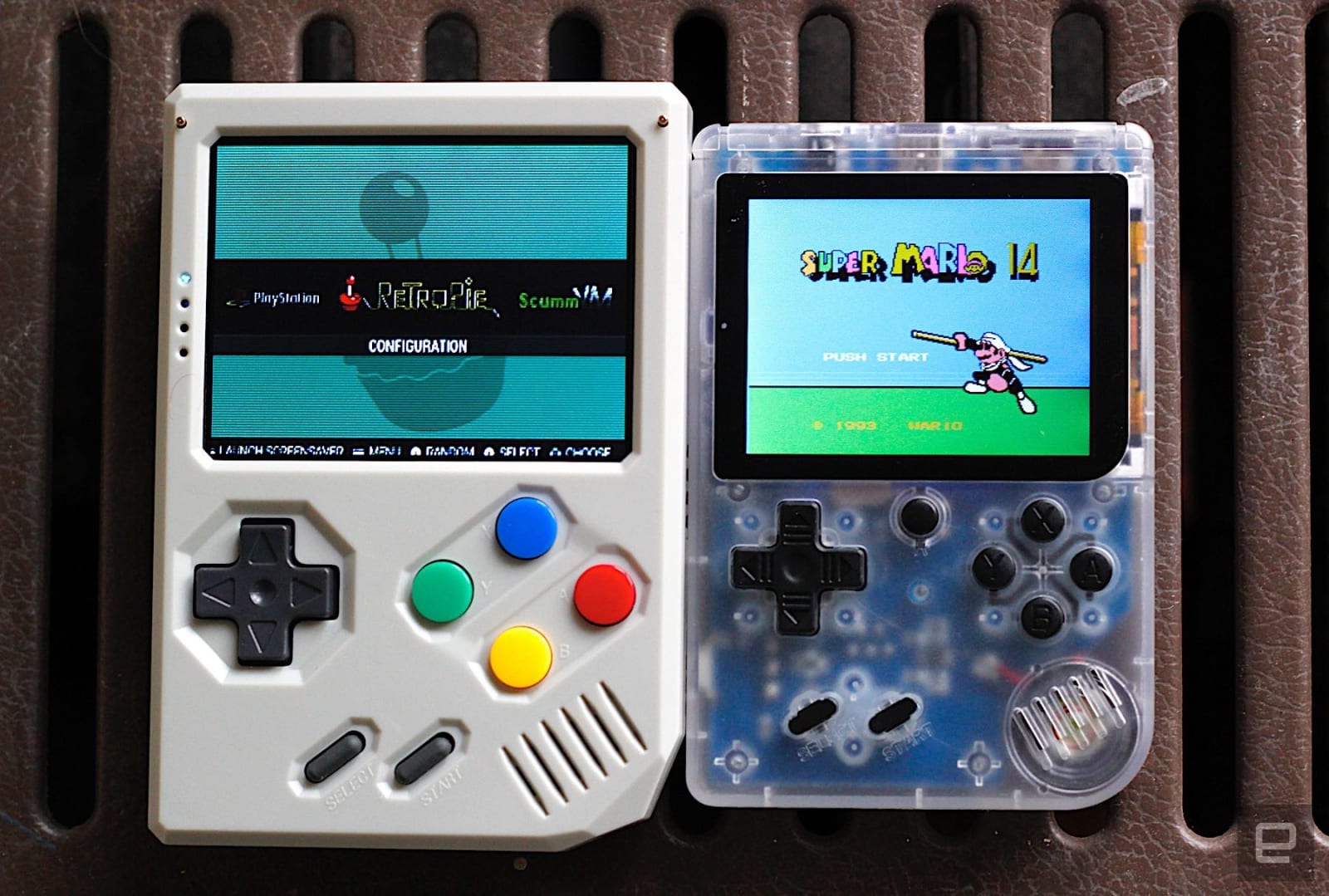 For a while, I had been using a modded PlayStation Portable. This worked pretty well. PSPs are fairly cheap to pick up (I picked mine up for about $50 on eBay), and easy to modify. This also meant I could play PSP titles as well as my Lynx library (I make an exception for ROMS for games I own). Before too long though, the batteries for the PSP kept crapping out and replacements would often be faulty on arrival, or expensive. I considered the PS Vita as an upgrade, but they still go for more than I really wanted to spend, and you need a specific firmware version which makes finding the right one a gamble.

The next logical step was to look at a handheld running RetroPie. There are a few options here, like the Pi GRRL Zero and GameBoy Zero (both, unsurprisingly, based on Raspberry Pi Zero boards). In terms of size, flexibility and functionality, these meet my weird requirements, except they both need to be put together and need a 3D printed case (or shopping around for one you don't hate). It looks like a fun project, I'm just not after a project right now. I wanted something that had a professionally-made feel to it and was somewhat good to go.

Enter the RetroStone ($156), by 8Bcraft. The RetroStone, with its vintage Game Boy aesthetic, instantly caught my eye. Originally launched on Kickstarter, it runs on a system similar to Orange Pi (a Raspberry Pi alternative), has its own version of RetroPi, and enough buttons to be compatible with many newer systems. Importantly, it comes ready to go, though you have to install the operating system yourself, as open source software generally can't be "sold." Fortunately, installation takes about two clicks on a PC to write it to the SD card, and you simply pop that back in the RetroStone. 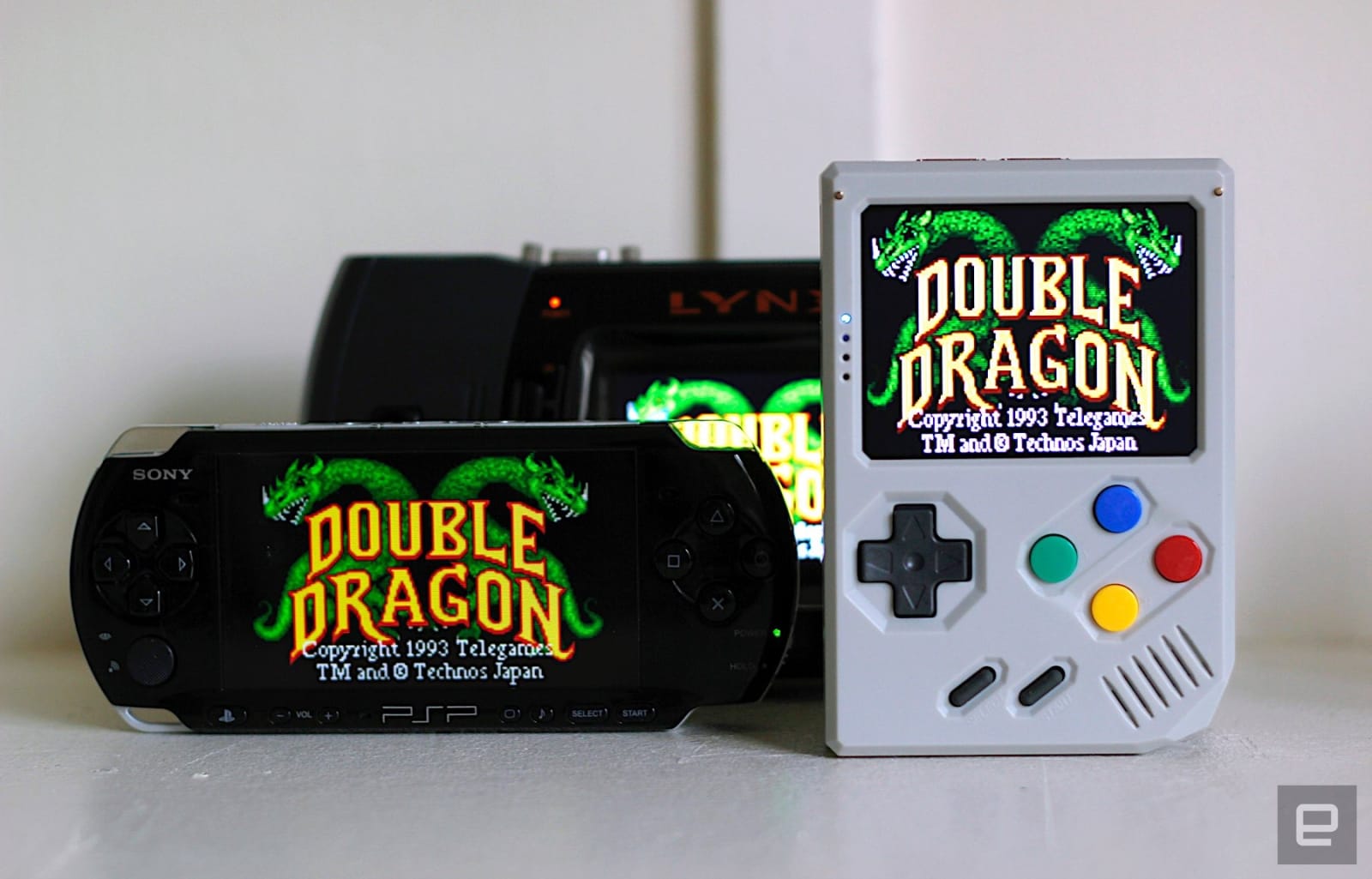 What I liked most, is that the RetroStone comes with four USB ports and an HDMI out, so you can connect four controllers, plug it into your TV, and voila, you have a living room console too. There's also a good old-fashioned headphone port and micro-USB for charging (I'm getting about 5 hours of play per charge). Most of the above is true for all Pi-based systems, this one is just well made and requires very little setup. I also just love how it looks (though, I can see it might be an acquired taste). Price-wise it's in PS Vita territory, but I love the vintage styling and its added desktop capabilities. More on that later.

8Bcraft isn't a large organization. In fact, as far as I know, it's a one-man outfit. The RetroStone is the second console from him/them, with the Raspiboy ($87) being the first. The two are similar, but the Raspiboy is a little too quirky-looking (even for my taste), and, as the name suggests uses a lower-spec Raspberry Pi board. It comes as a kit but doesn't need soldering. As the RetroStone has more processing punch, it can emulate more modern systems (apparently up to the N64/PS1 era, and even some PSP games).

Turns out, that the RetroStone exists purely for people with similar desires as me. Pierre, the man behind the product told me over email "It was very difficult to make a Game boy zero, you had to be an electrician. And when you add the cost of all parts it was pretty expensive. So I thought, why not make something that is accessible and affordable? That's when I made Raspiboy." (And then, the RetroStone.)

Another benefit of these "Pi" systems (whichever fruit it is), is that you can use them as portable PCs too (this is their primary purpose after all). With the RetroStone, if I plug in a keyboard and mouse, then connect it to a monitor (or my TV), then you have a full desktop to play with. This is probably not that interesting to most people, but after handheld gaming systems, my next weird tech crush is weird, small, not very practical mini PCs (ILU Nokia N800). Not sure why, but I think it's a throwback to when the very idea of a functional, pocket-sized PC was kinda mind-blowing.

Yes, I know that I already have a phone that is well made, has oodles of processing power for both gaming and whatever else that fits in my pocket. The thing is, I want something for time away from my phone, not just more phone time. Plus I hate onscreen controls, and grips/adapters aren't in the spirit of what I want. Like I said earlier, logic doesn't factor highly in my plans, it's all about that pure gaming feel. 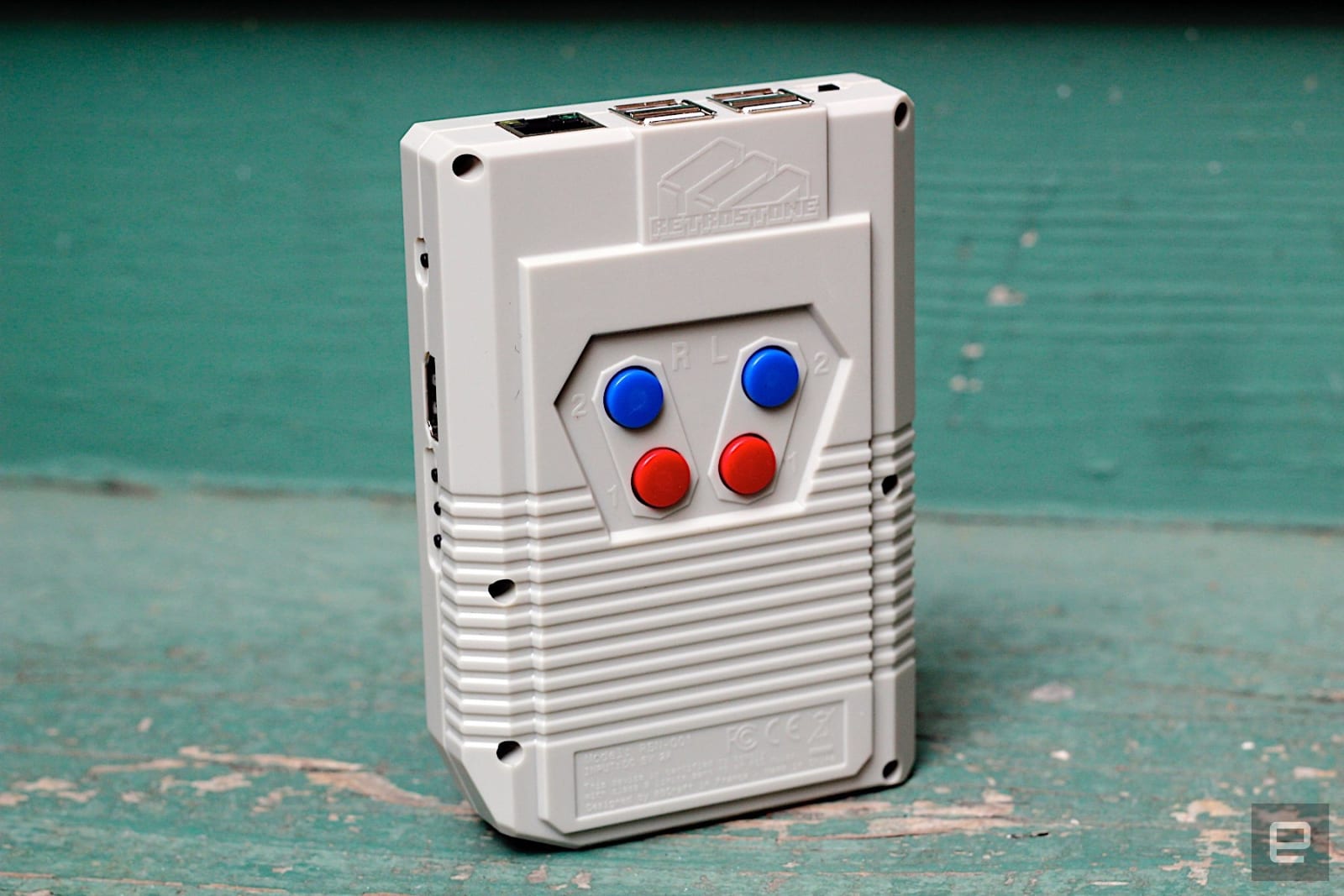 And the RetroStone has feeling in spades. Every time I glance at it across the room, I have the urge to pick it up and play. I spent far too long researching slightly shitty mini wireless Keyboards (for my wonky portable PC fantasy) and I also had to buy a WiFi dongle, as the RetroStone doesn't have any wireless at all (it does have an Ethernet port though!).

When I hold the thing, it feels comfortable, and just like a handheld console should (slightly chunky, but not heavy or cumbersome). The buttons feel like an original Game Boy, and the D-pad doesn't feel slack or spongy. There are four more "shoulder" buttons on the back, which I find a little hard to reach, but none of the games I play right now need them.

The 3.5-inch display is decent; it's a little low in resolution at 320x240, but that's more than adequate. The bigger problem is that it uses the composite output (as the board's HDMI output was needed for the TV out). That said, when I compare it side by side with the PSP running the same emulated game, it's notably sharper. The PSP is a little blurry/soft looking, despite any tweaking I do in settings (if I am missing something here, let me know). 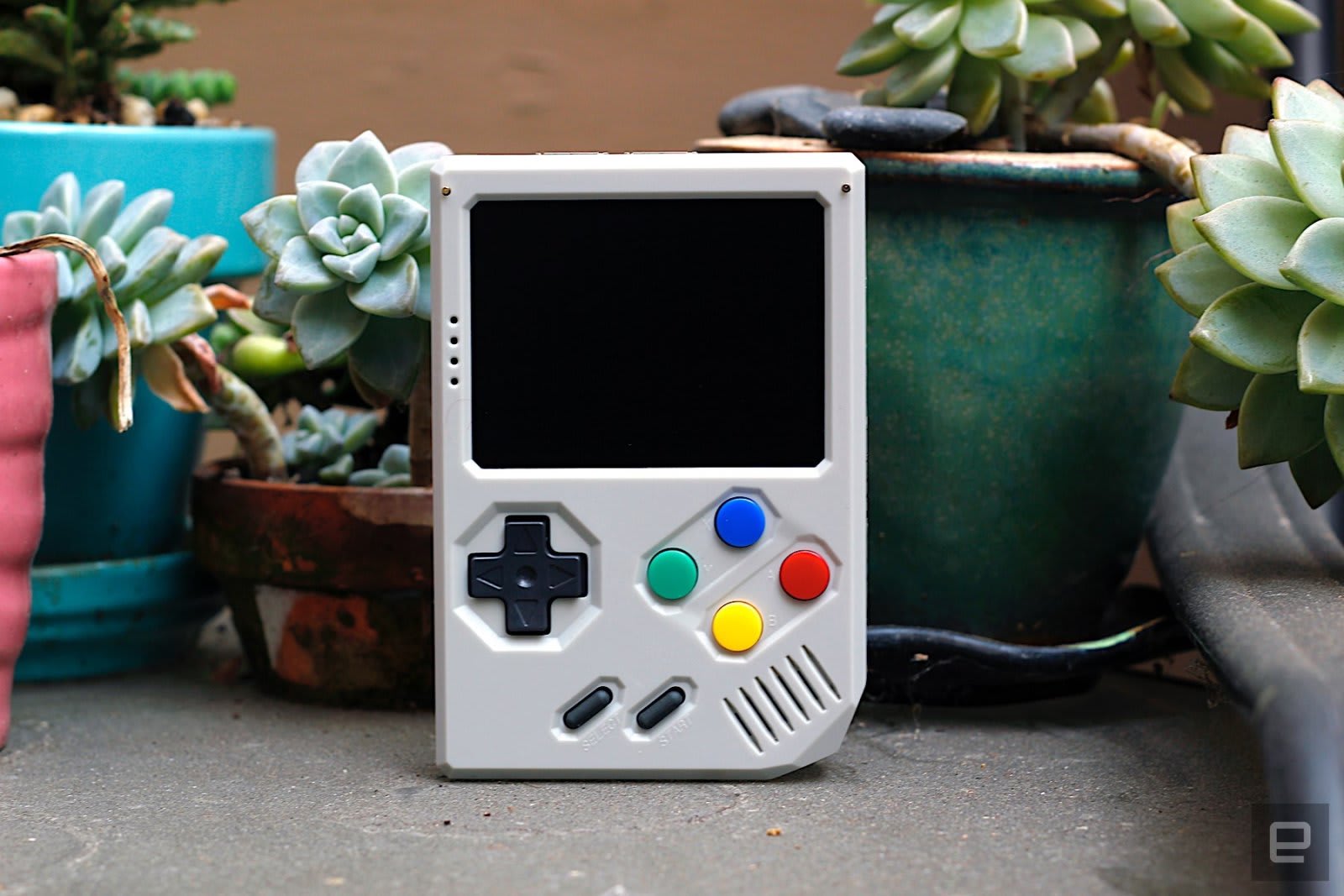 Also, despite the love and care that has clearly gone into making this thing, you are still reminded that it's a barebones Linux machine in a nice case. While that $20 thing I bought on Amazon boots up instantly to the game selection menu, the RetroStone goes through a whole PC-like startup process that takes almost a minute. It's also a little temperamental, sometimes taking a few restarts before it loads up properly.

Right now, the RetroStone is the closest thing to the comprehensive retro gaming experience I am looking for. I love that it has untapped potential as a mini-PC too (and all the other perks of RetroPie, like Kodi and so on). Much as I love my old Lynx (which I paid a princely sum to upgrade the screen on), the portability and design of the RetroStone have won me over.

As enamored as I am with the RetroStone, my quest isn't over. I know there are likely more contraptions out there, with different reasons to consider (smaller? More powerful? Has other superfluous features that'll appeal to me?). I'm still even thinking about the PS Vita, for reasons I cannot explain. So, fellow retro gamers, if you happen to know of other systems out there to add to the collection, I'm all ears.

All products recommended by Engadget are selected by our editorial team, independent of our parent company. Some of our stories include affiliate links. If you buy something through one of these links, we may earn an affiliate commission. All prices are correct at the time of publishing.
View All Comments
What we're buying: RetroStone's smart take on retro handheld gaming