The Venii N1 is a surprisingly well-thought-out piece of kit from China.

A quick search on Google will show that robot cleaners and dog poo don't go well together, yet none of the big players out there have offered a solution (Sony's Aibo doesn't count). Another pain point that has put me off from acquiring a mopping robot is the fact that the mop -- often a piece of detachable fabric -- requires manual cleaning, which is rather awkward even if there's no faecal smearing. To my surprise, it was a Chinese startup at TechCrunch Shenzhen that seems to have it all figured out.

Veniibot, a Chengdu-based team of over 20 employees, unveiled its Venii N1 mopping and sweeping hybrid robot at the TechCrunch event earlier this week. While you may not have heard of this startup before, its talents were hired from the likes of ZTE, Baidu, Motorola, Foxconn, Ecovacs and more. For those who are wondering, the N1 has over 100 patents in total.

On top of the usual LIDAR and SLAM tricks for indoor navigation, the N1 utilizes a pair of front-facing cameras -- one pointing slightly downward with the other looking upward -- for recognizing objects. And no, the cameras aren't able to send data to the cloud due to the isolated circuitry (or so I was told), which should be a relief to those who really care about their privacy.

Thanks to machine learning, the N1 can apparently spot pet poop in various shapes and forms using just a camera. While there was no live demo at the event, the official product video does show a prototype crawling around a piece of poop (though it was a close call between the faecal matter and the side brush), so we'll just have to take the company's word for it. That said, since this is a camera-based solution, I suspect the room will likely need at least a bit of light for the poop recognition to work well.

The same downward camera can also detect carpet as the robot approaches it on hard floor, at which point it will retract the mop and just sweep with its soft velvet roller brush -- all the debris gets sucked into a one-liter disposable bag. Similarly, when the robot reaches the corner of a room, it whips out its "Snail Touch" side brush to sweep the remaining space, regardless of floor type.

As for the other camera, it's able to detect taller obstacles as well as its user's face. The latter comes in handy for when you summon the robot over -- via its beamforming microphone array -- to clean the space around you, though you can also ask it to clean other rooms using their predefined names in the app, as well as to set a schedule for specific cleaning tasks. 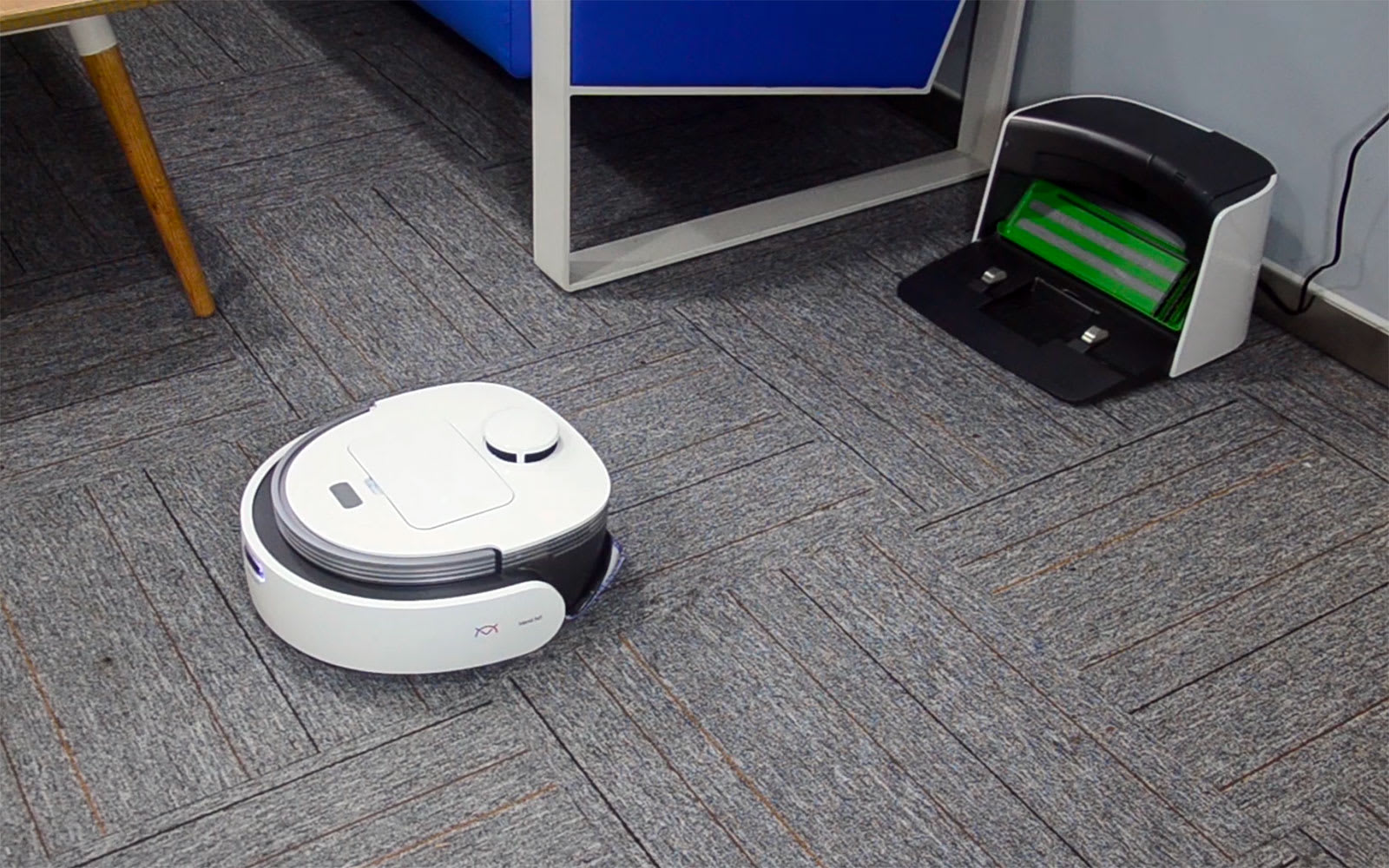 While existing mopping robots feature a small water reservoir plus a cloth that requires frequent removal for cleaning, the N1 has taken a different approach: It relies on a more generous 800ml tank inside its "Wash Base" charging dock for self-cleaning and moisturizing purposes. After every 15 to 20 square meters (about 160 to 215 square feet), the N1 returns to its station where its mop gets scraped, sprayed and squeezed, then it goes back to where it left off and continues mopping.

As the water is recycled using an internal filtration system, one full tank will cover at least 120 square meters or about 1,290 square feet of space, which is about 6.5 times that of the iRobot Braava Jet or almost 3.7 times that of the higher-end iRobot Braava 300. Of course, you'll have to eventually clean the Wash Base's filter and debris trap, but this is still far less hassle than refilling the tank and washing the mop several times to cover the same amount of space.

Another notable difference on the N1 is that it actually applies pressure onto its mop via a pair of extending arms. This basically lifts the robot up slightly on the back, in order to re-use the robot's weight for a supposedly better mopping effort, as opposed to how others merely push or drag the cleaning fabric around. 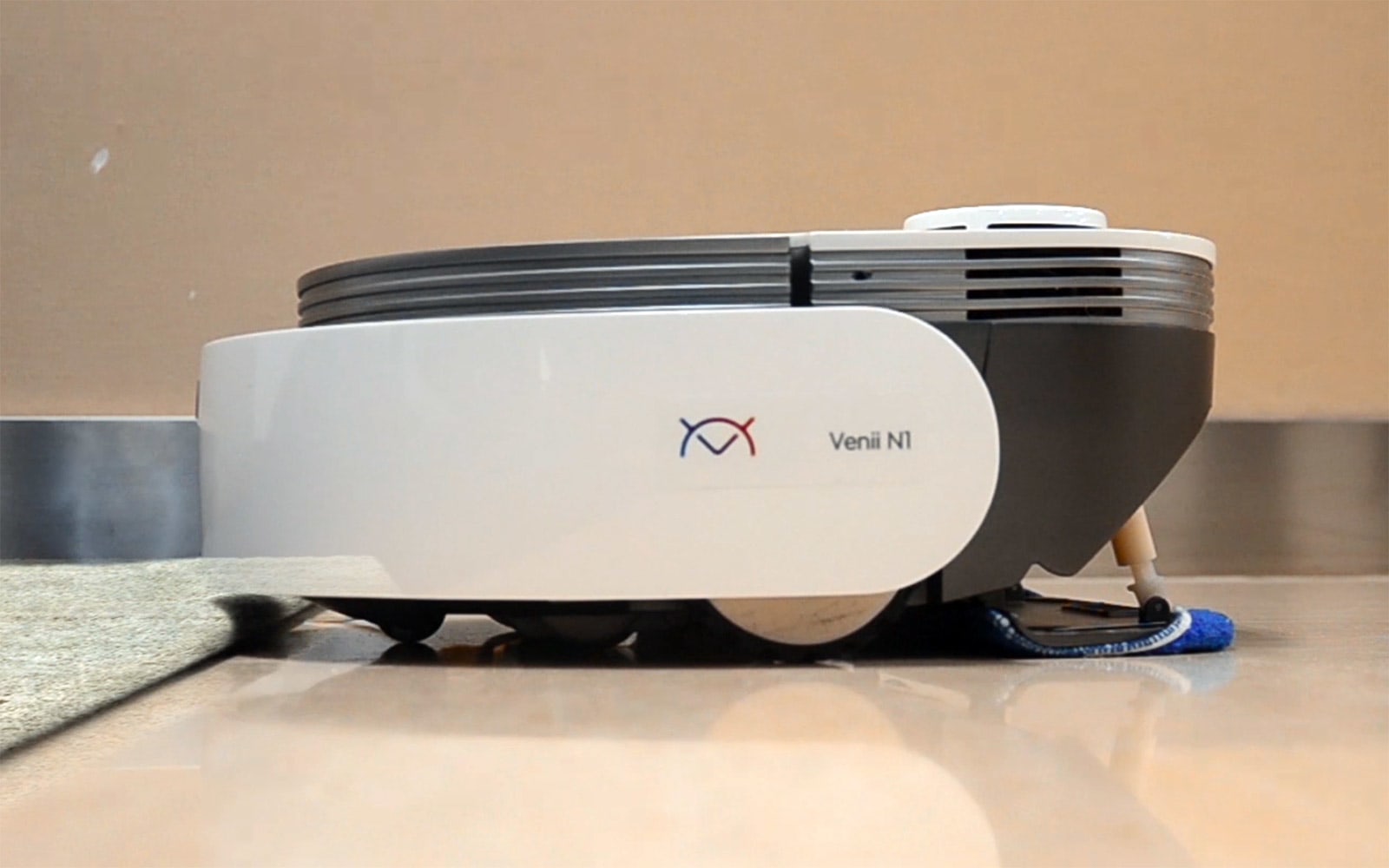 Unlike Xiaomi's own robot vacuum cleaner, the Venii N1 isn't here to fight a price war, but if it can indeed mop the floor well and avoid smearing dog poo as advertised, then I'm all for giving it a try. I'm also intrigued by the startup's planned lineup: A company rep teased an N1S model which will even be able to scoop up poop (I wonder what the "S" stands for?), and I was told to expect some sort of larger robot that can pick things up to tidy messy room -- maybe a bit like the machine developed by the Toyota-backed Preferred Networks Inc.

For now, the Venii N1 has only been announced for China, but the company does have global ambitions, starting with its planned appearance at CES this coming January. Until then, folks in China can pre-order one for 2,499 yuan or about $360 via JD.com's crowdfunding platform from December 5th, though shipping won't be until May next year. Afterwards, the N1 will retail for 3,299 yuan or about $470.