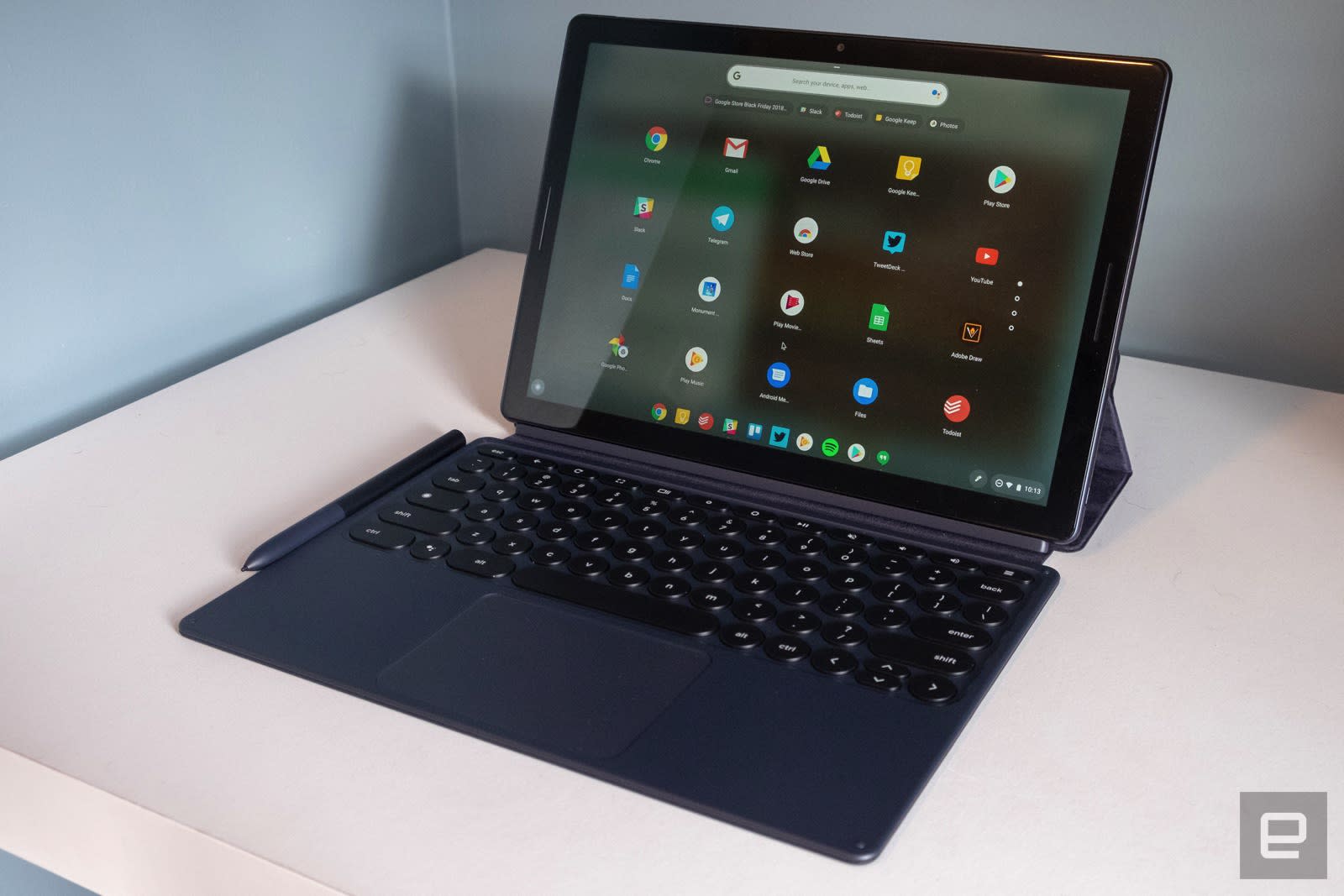 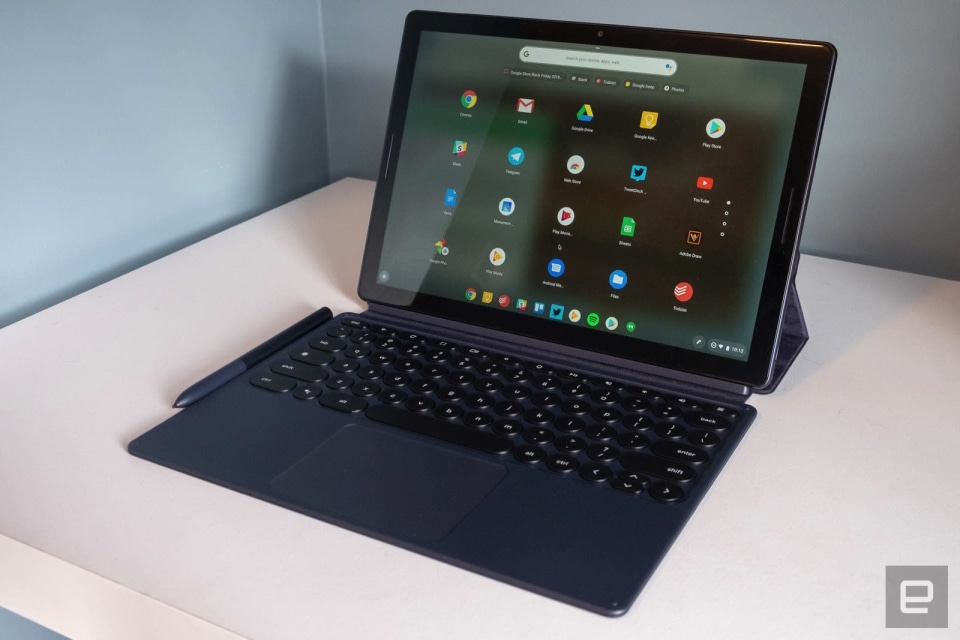 Google has made a couple of excellent but expensive Chromebooks over the years. The Pixel Slate is the company's first Chrome OS tablet, though. A few years ago, such a device would have been borderline useless. But Google has spent a lot of time making the OS work better with touchscreens while still keeping its desktop-style multitasking intact. Now, with the Pixel Slate, Google thinks it has a product that can compete with Apple's iPad Pro and Microsoft's Surface Pro 6.

Obviously the Pixel Slate has its work cut out for it. But on the surface, it's some of the most impressive hardware Google has built. And from a pure specs perspective, the Slate should be able to keep up with the iPad Pro and Surface Pro, no problem. But as we all know, there's a lot more to a computing experience than just specs. I've spent the past few days seeing how using the Pixel Slate stacks up against the competition, including how it fits in among the many other Chromebooks on the market. The Pixel Slate might be Google's toughest Chrome device to evaluate yet -- as such, we're running a preview today, with our full review coming later this week.

The Pixel Slate's software is ultimately what will make or break this device, but I can say that, from a pure hardware perspective, there's a lot to like here. The Slate features an excellent display and speakers, a solid typing experience and powerful internals (Intel i5 processor, 8GB RAM, 128GB storage). Getting all of that in such a small, light package makes this close to my ideal travel computer. I was surprised to learn that the Slate and its keyboard are actually thicker and heavier than the Pixelbook, because it somehow feels even more portable. It's not the engineering marvel that the new iPad Pro is, but it's still a very impressive package. 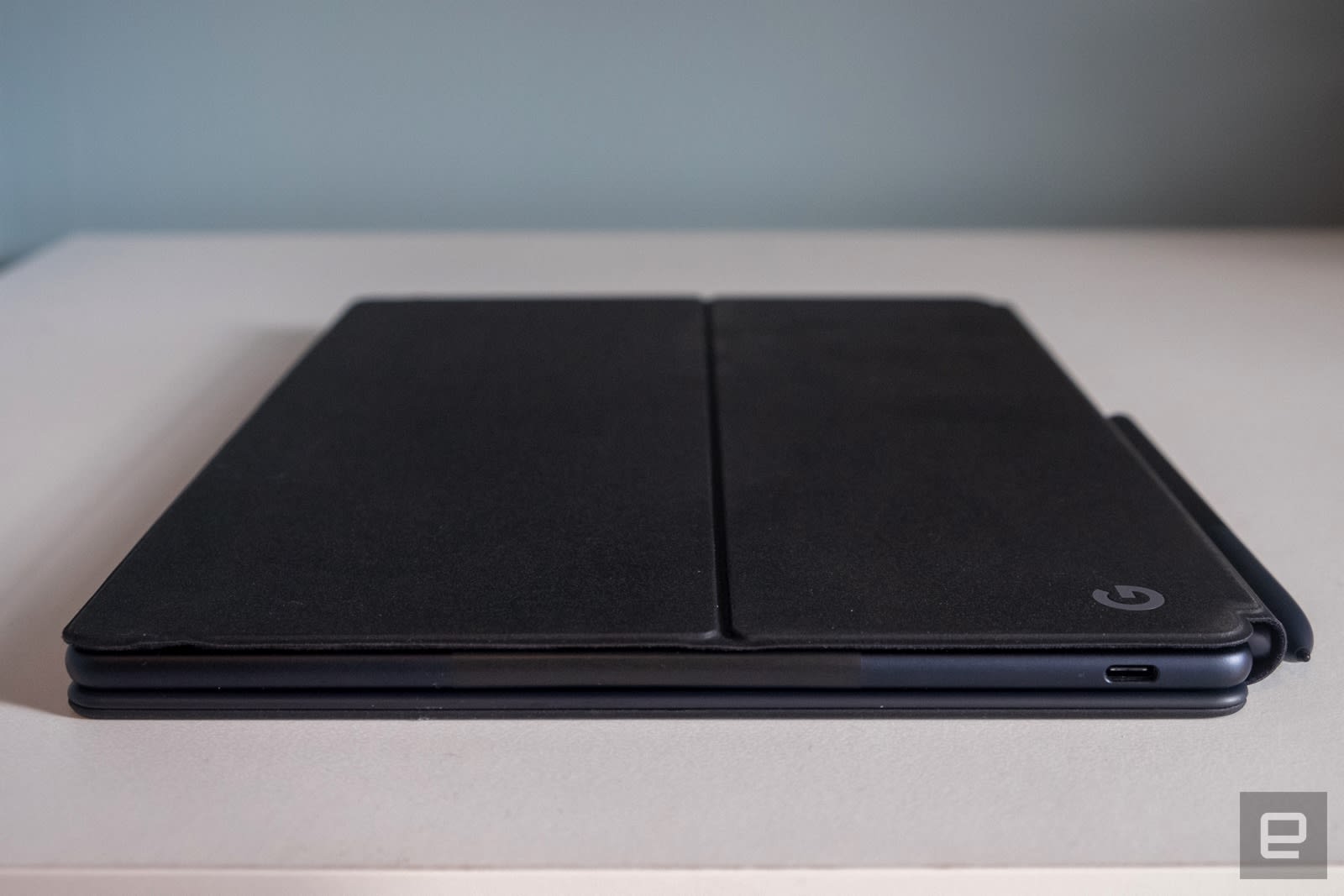 Since Google isn't including the keyboard folio with the Pixel Slate, it's worth considering the device strictly as a tablet. As with all tablets, the discussion largely begins and ends with screen quality, and the Pixel Slate has that in spades. The 12.3-inch, 3,000 x 2,000 LCD looks fantastic. No, it doesn't have the rounded corners you'll find on the new iPad Pro, but it's sharp, extremely bright and all-around pleasant to look at.

Google's whole pitch for the Pixel Slate is that it's equally suited for work and play -- and if you want something to kick back to watch movies or play games on, the Pixel Slate will indeed deliver. The combo of the front-firing speakers and excellent screen make it a great, if expensive, option for Netflix binges. Game performance, on the other hand, was a mixed bag. That's likely due to some Android games not being optimized for a Chrome device or the x86 architecture powering this device -- but it was still a bummer. My go-to Alto's Odyssey dropped frames far more than I'd expect on such a powerful device, and Rayman Adventures is completely broken. But Google-recommended games like Asphalt 9 and Don't Starve performed without hiccups.

Google has done a lot of work to make the Chrome OS UI work better on tablets here. When there's no keyboard attached, it shows an almost iPad-like grid of all installed apps, and you can't "close" out of apps the way you do when in desktop mode. Instead, you hit the home button in the lower left to get out of whatever you're running. There's also a multitasking button in the lower right that lets you run two apps at once side by side.

It works, but I didn't find myself needing split view when just using the Slate as a tablet very often. Mostly I was doing things that required singular focus, like watching a movie, playing a game, drawing and so on. The rest of the time, I was browsing the web and jumping between lightweight apps like Todoist, Keep and Android Messages. Though sometimes having a Chrome window open next to a Keep note or to-do list was handy.

With the Pixel Slate Keyboard

Chrome OS is still at its best with a keyboard. For me, I can't do any of my job without a keyboard, so the notion of a tablet on its own for much of my day is a non-starter. Fortunately for me, the Pixel Slate Keyboard (as it's officially called) offers a pretty solid typing experience, particularly given how thin it is. Despite adding basically no bulk to the Pixel Slate, the keys have a decent amount of travel and are actually backlit. Yes, the circle design is a bit strange, but the keys are large and well spaced and I adjusted pretty quickly.

While the trackpad doesn't have the glass cover that I'm used to from my MacBook, it's still pretty solid for such a compact device. Size-wise it's about the same as the Pixelbook's trackpad, and it's responsive and has a pleasant clicky sensation.

When docked in the keyboard folio, Chrome OS runs as it does on any other Chromebook, for the most part. The software reverts to the standard, Windows-style experience most users will be familiar with. This is perhaps the Pixel Slate's biggest advantage over the iPad Pro: real multitasking and a full, desktop-class browser. The utility of these tools can't be understated, and they go a long way toward fulfilling Google's promise of a tablet that can do "real work."

A word about bugs

There's a lot more to get into here, including Android app performance, the Pixelbook Pen, battery life, the Pixel Slate's wild price structure and more -- but I'd be remiss if I didn't mention the extremely problematic first few days I had with the Pixel Slate. I've logged into many different Chromebooks with my Google account over the years, and somehow that caused a bug where two apps were requesting to be installed in the same position on the Pixel Slate launcher. I had no idea this was happening, but if I was running any Android apps, the Slate would crash and reboot every 10 seconds or so, and a full "Powerwash" wipe of the computer was the only thing that would stop it.

Since Google identified the bug and gave me a fix, I've been able to use the device as I would have expected. But I'm still concerned that other longtime Chrome OS users could run into trouble. And if I run into trouble again, that'll be reflected in our full review, coming later this week.

In this article: chrome, chromeOS, gear, google, personal computing, personalcomputing, pixel, pixelslate
All products recommended by Engadget are selected by our editorial team, independent of our parent company. Some of our stories include affiliate links. If you buy something through one of these links, we may earn an affiliate commission.