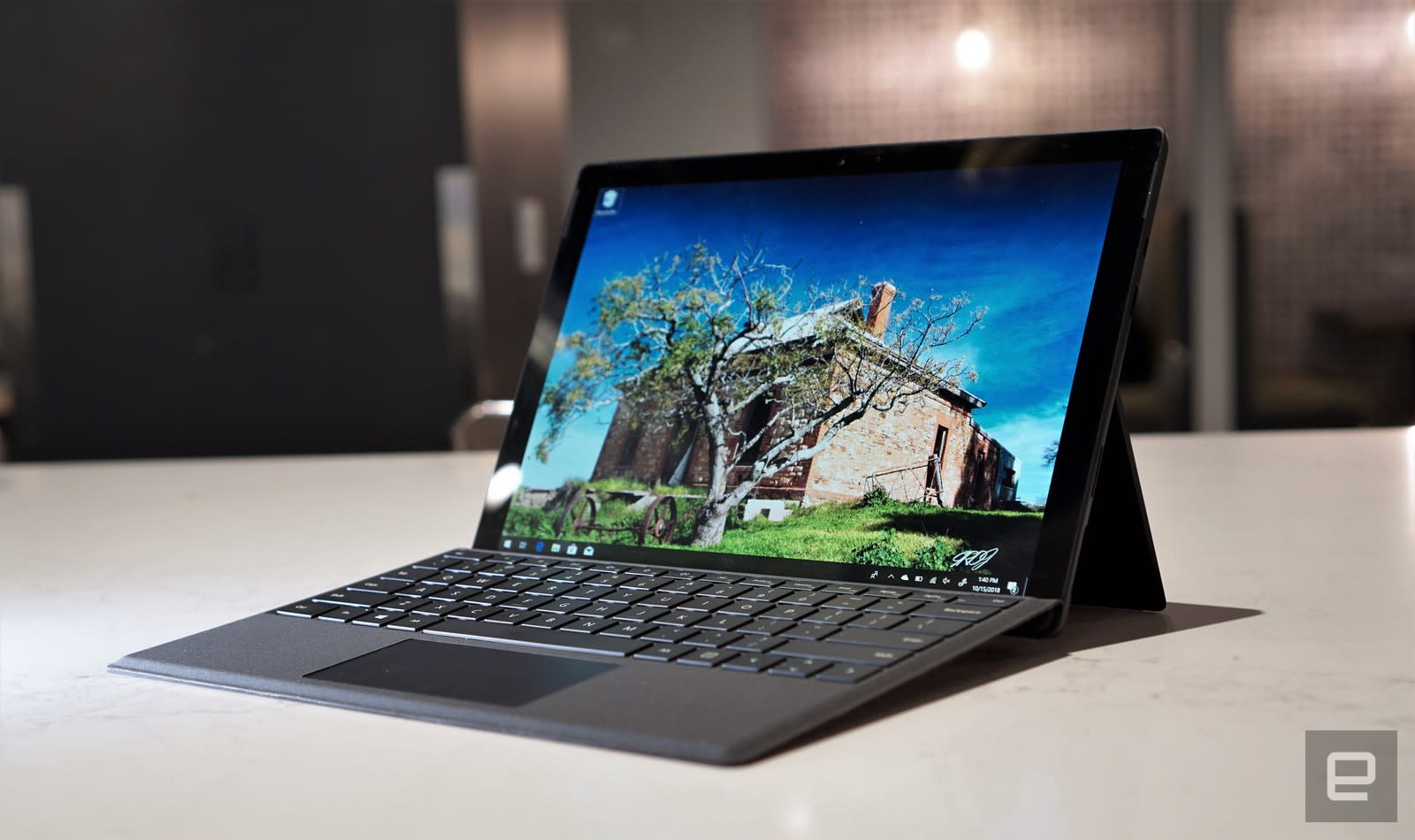 But it's not a huge upgrade over the Surface Pro.

Microsoft's Surface Pro 6 is the ideal hybrid tablet. It's a slate that can run all of the Windows apps you need, and together with its keyboard cover, it can also serve as a solid ultraportable laptop. But honestly, the same was true for last year's Surface Pro, a machine that was mostly a spec bump from 2015's Pro 5. This latest Surface isn't the major redesign we've been waiting for, but it's still a great option for anyone looking for a unique ultraportable PC. And at least it finally comes in black again.

There is one wrinkle for Microsoft though: the Surface Go, its great new tablet PC. Now that there's a cheaper way to get most of the Surface experience, in a much smaller package, there may be less of a reason to spend extra for the Pro model.

I'm not kidding when I'm saying the Surface line is in need of a revamp. The Pro 6 features the same case as the last two models, measuring 8.5 millimeters thick and weighing 1.7 pounds. It still looks sleek and it's very sturdy -- so at least Microsoft isn't outmatched by the competition.

The new black option is a nice change, at least, but it's really just Microsoft going back to what it did with the first two Surface Pros. Most recently, the company has been focusing on a modern gray aesthetic for most of its computers, which seems more approachable. The black case has a hipper and more mysterious vibe in comparison. Unfortunately, it's also surprisingly easy to scratch. That's something that affected the previous Surface devices, but it's more obvious on a black case than a gray one.

As you'd expect, the kickstand makes a return on the Surface Pro 6. It can open up all the way down to a low studio mode, which is ideal for sketching with the Surface Pen. It would have been nice to see some evolution with the kickstand, though. We're now seeing new convertible PCs like HP's leather Spectre Folio, which has a kickstand that comes out from the bottom of the case for added stability. Now that other companies are catching up to the Surface, it's time for Microsoft to get back to the drawing board. 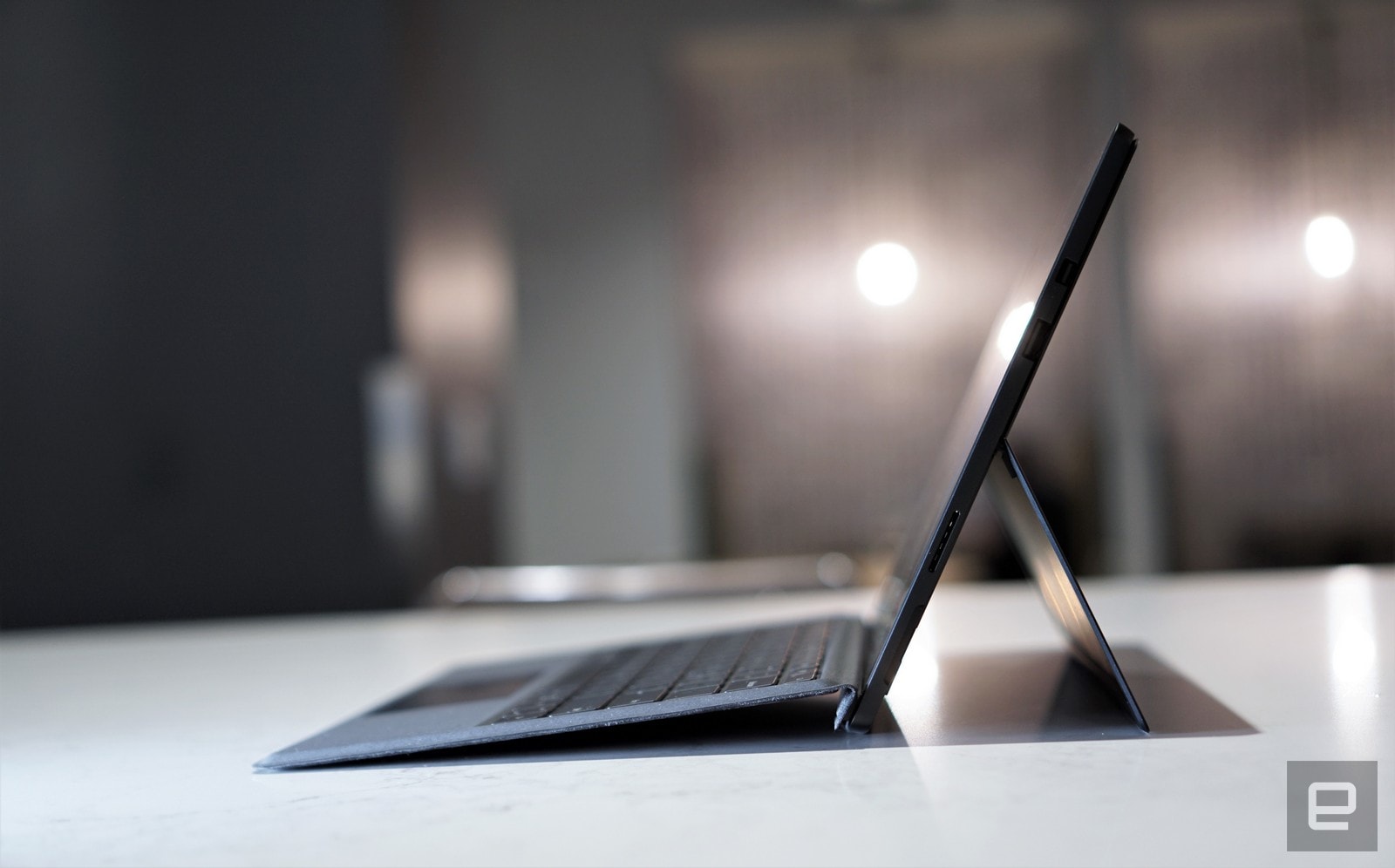 Microsoft also added a few upgrades to keep the machine modern. It has Intel's 8th generation processors, which should make it both more powerful and more energy efficient. Plus the 12.3-inch display is brighter and features more contrast, while keeping the same sharp 267 pixels per inch.

As usual, you'll also have to shell out an additional $130 for the Surface Pro's Type Cover. The keyboard hasn't changed from last year: It still offers a great typing experience, with wonderful responsiveness and a solid amount of key travel. And the trackpad remains smooth and accurate. It's just a shame you have to pay extra, since it's practically a requirement if you want to use the Pro 6 as a PC.

And just to remind you this is actually a computer, and not a typical tablet, there's a decent selection of ports, including a traditional USB 3.0 connection, a miniDisplayport, headphone jack and Surface Power connector. There's also a MicroSDXC card slot tucked under the kickstand. It would have been nice to see Microsoft include USB-C though, since that would have given us another option for charging like on the Surface Go. In our testing, the Surface Pro 6 didn't feel significantly different than last year's model. Our review model featured a Core i5 8250U CPU, 8GB of RAM and a 256GB SSD. It had no trouble keeping up with my daily workflow, which involves opening dozens of tabs, multiple documents, playing Spotify, juggling tons of Slack conversations and doing some occasional photo editing.

I never felt any sluggishness -- but I didn't really expect any, since last year's Surface Pro was more than enough for me. The only major performance downside, as you'd expect, is with games. The Pro 6 still relies on Intel's integrated graphics, and while it's gotten better over the years, it's not something I'd use for any modern PC games.

Surprisingly enough, I didn't see a huge jump in PCMark benchmarks, which tests overall system performance, but the Pro 6's 3D Mark scores were a bit higher. Battery life was also better, clocking in at 15:34 in our rundown, compared to 13:40 on last year's Pro. After using it for a typical eight-hour workday, it had around 20 percent of its battery life left.

As for the Surface's kickstand, it usually takes a bit of practice for newcomers. It's most stable on a flat surface, as you'd expect, but I had no problem balancing the computer on my lap too. There are some occasions where the hinge gets in your way, though. I had a lot of trouble holding the Surface Pro steady while I was trying to get work done on a crowded subway car. It worked fine when the train wasn't moving, but it was tough to balance in motion since I couldn't readjust my legs. A rider sitting next to me had no trouble working on their MacBook Air.

For the most part, I used the Surface Pro 6 as a laptop, but it still works very well as a tablet. It's not as finger-friendly as an iPad though, since Windows is still mostly geared toward desktops and notebooks. Until Microsoft's OS gets more tablet-focused apps, the slate mode will always feel like an afterthought. And who knows if that will ever happen. The Microsoft Store has gathered some popular apps over the last few years, Spotify and iTunes, but they're rarely optimized for tablets. At least you can still browse the web, read digital comics and watch movies on Netflix in tablet mode. 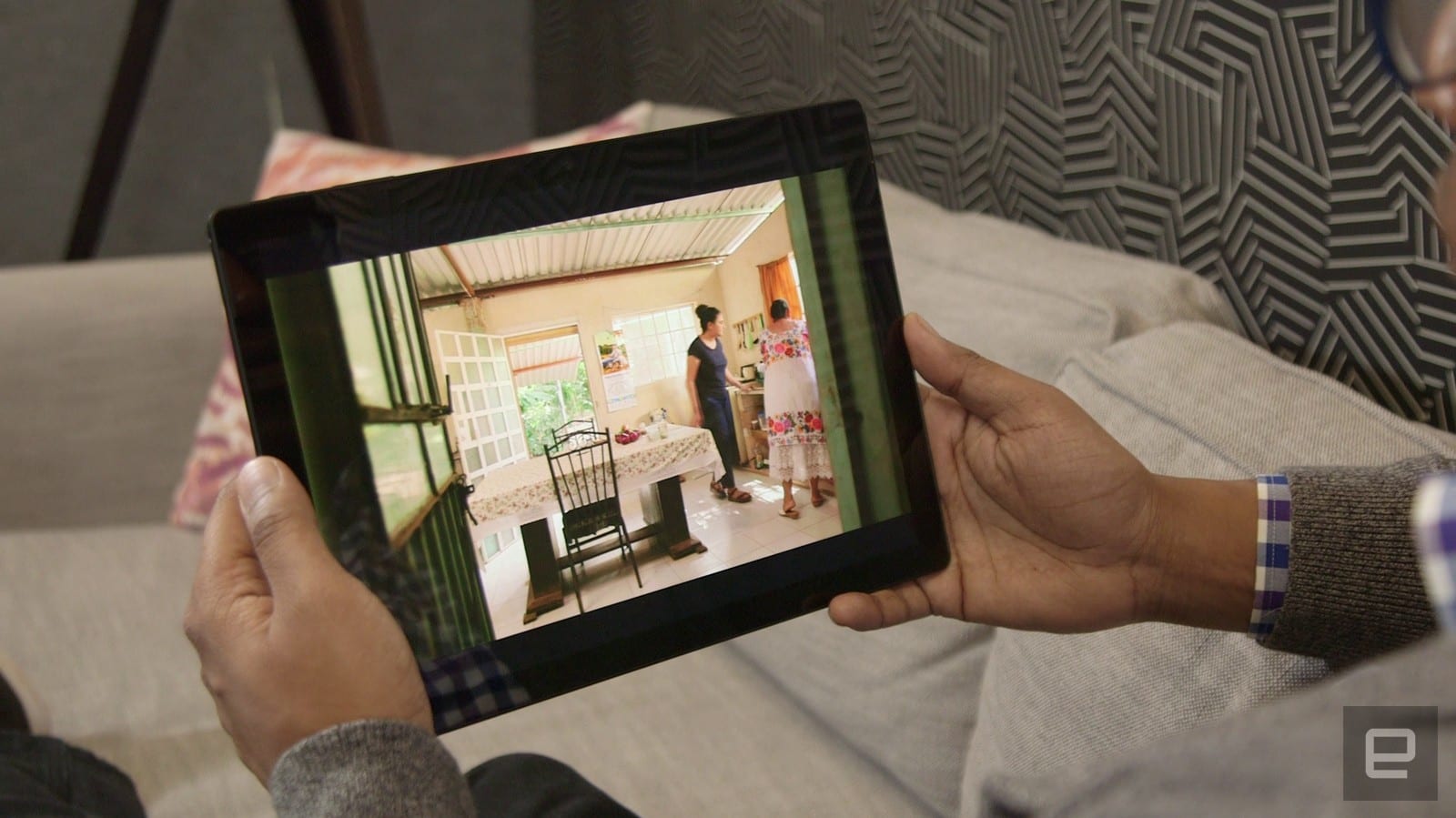 And speaking of media, the brighter screen on the Surface Pro 6 is a huge help. Everything just pops a bit more, especially in direct sunlight. It's not an HDR screen, though. Which is a shame since you'll find those in an increasing number of ultraportables and even the iPad Pro. Microsoft is running out of excuses. 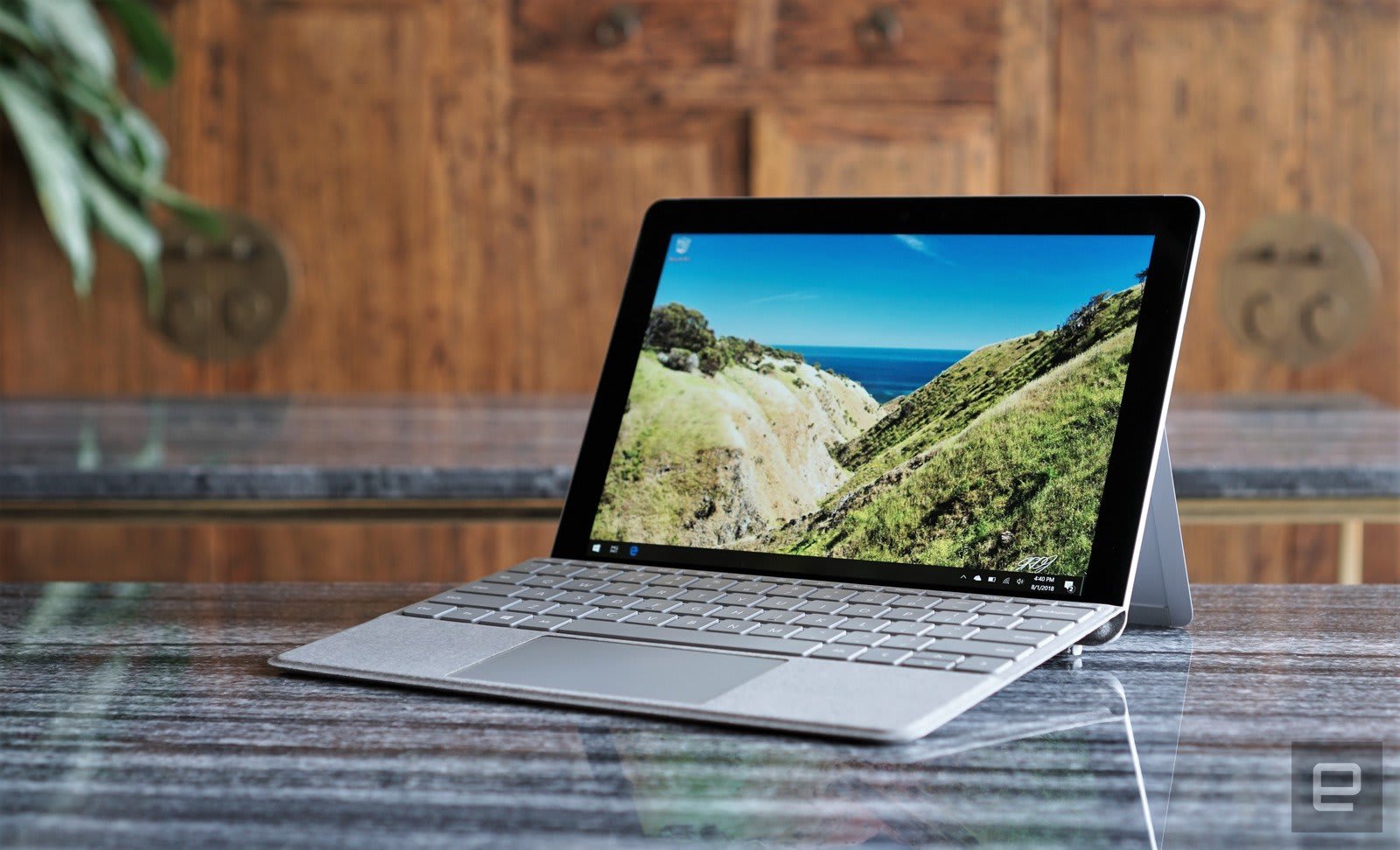 The Surface Pro 6 starts at $899 with a Core i5 CPU, 8GB of RAM and a 128GB SSD. That's much better than last year's base configuration, which had a paltry 4GB of RAM and an underpowered CPU. If you need a bit more storage, you can also bump up to 256GB of storage for $1,199. That's also the cheapest config that lets you choose the new black case. But of course, don't forget to add the extra cost for the keyboard and another $100 for the Surface Pen. If you want all the accessories with the base Pro 6, you'll be spending $1,129.

This is a strange year for Microsoft's Surface lineup, since the company just recently introduced the $400 Surface Go. Sure, it's significantly less powerful than the Pro 6, but I found it to be fast enough for basic productivity work. It's also more portable and cheaper while offering a similar Surface experience, kickstand and all. 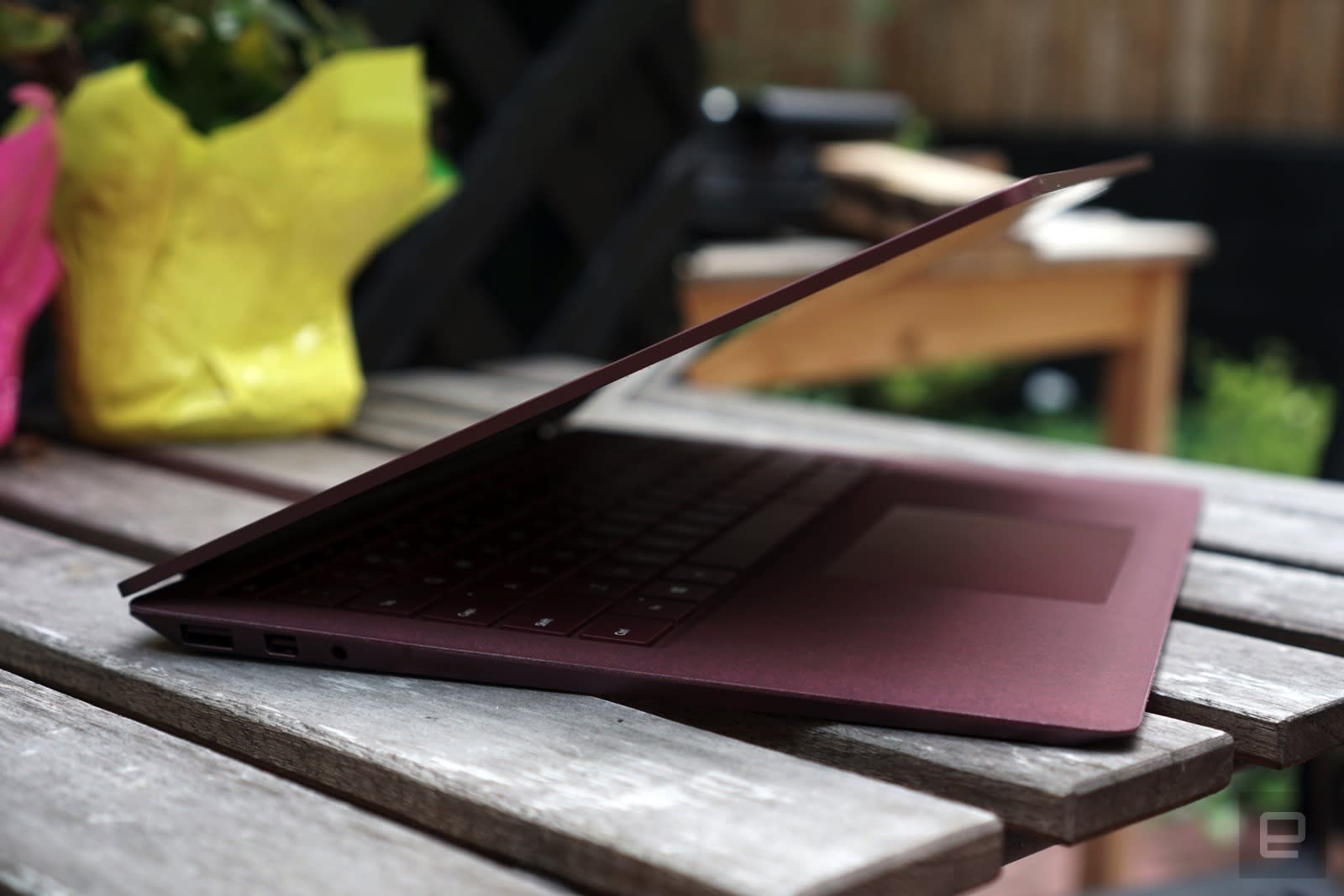 To be honest, I've spent more time with the Surface Laptop than the Pro over the last year, simply because it works more like a typical notebook. I don't need to worry about balancing a kickstand, or making sure the keyboard cover stays attached properly. This is the real issue for Microsoft: Hardcore PC users will always prefer traditional computers. For many folks, it might make more sense to pick up the Go as a secondary computer, instead of going all-in on the hybrid tablet concept with the Pro 6.

Of course, Apple's iPad Pro is a solid competitor too, but mainly for the iOS faithful. I couldn't live with typing on Apple's keyboard cover all day. And on the PC side, there are options like HP's Spectre X2 and Lenovo's ThinkPad X1 Tablet. They're each compelling in their own way, but Microsoft's hardware still feels more refined. 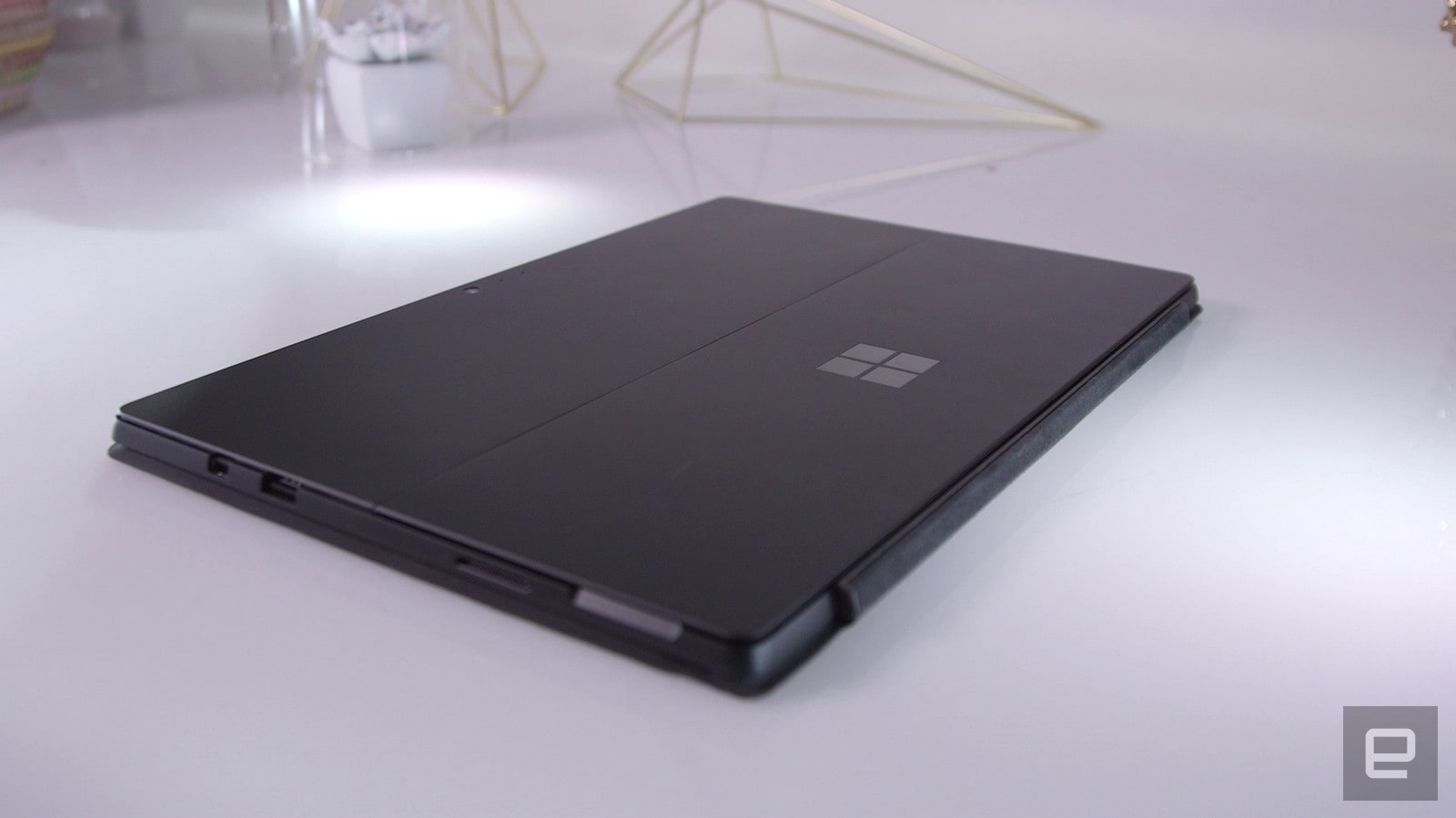 The Surface Pro 6 is pretty much the upgrade we expected. It has the latest CPUs, a slightly better screen, and that's pretty much it. Microsoft basically did the bare minimum this year, which keeps it relevant in the hybrid tablet industry, but doesn't really push anything forward.