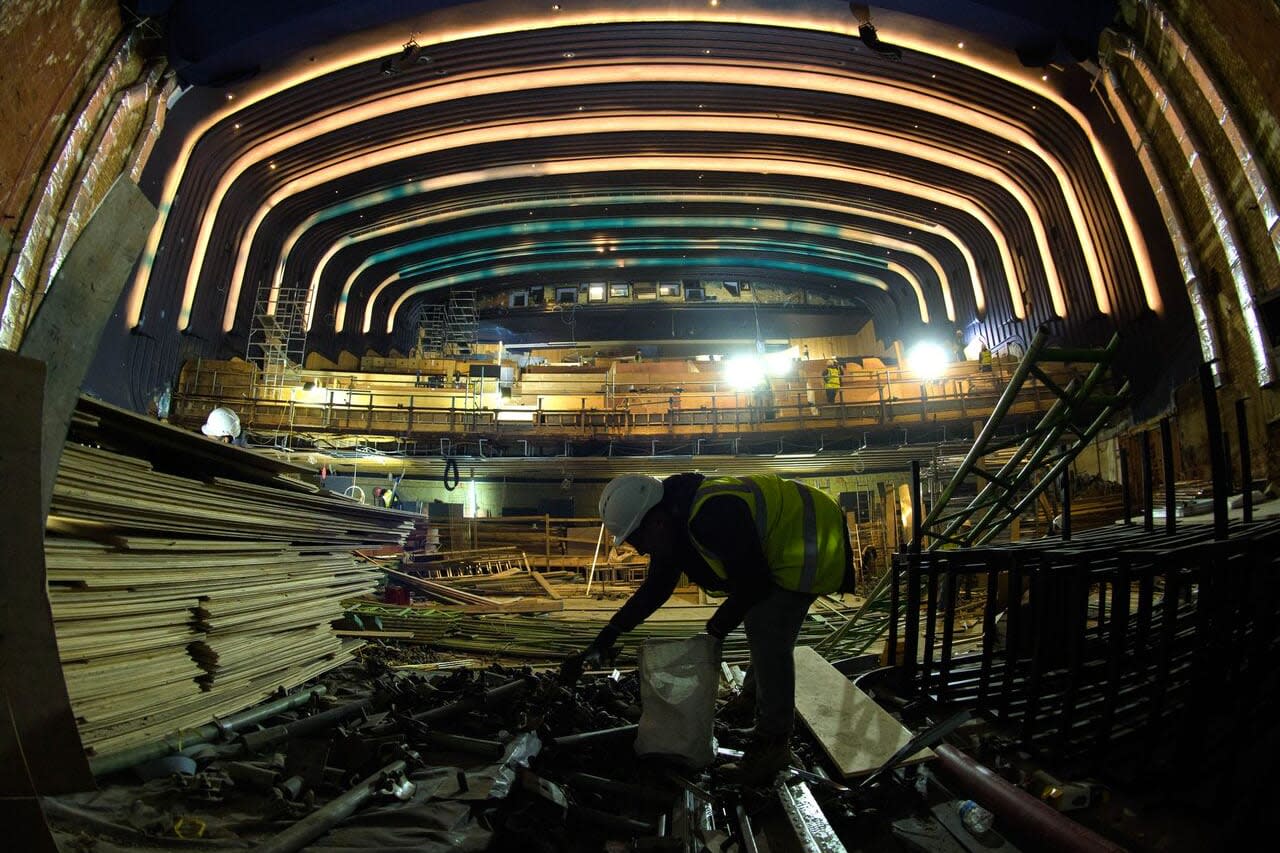 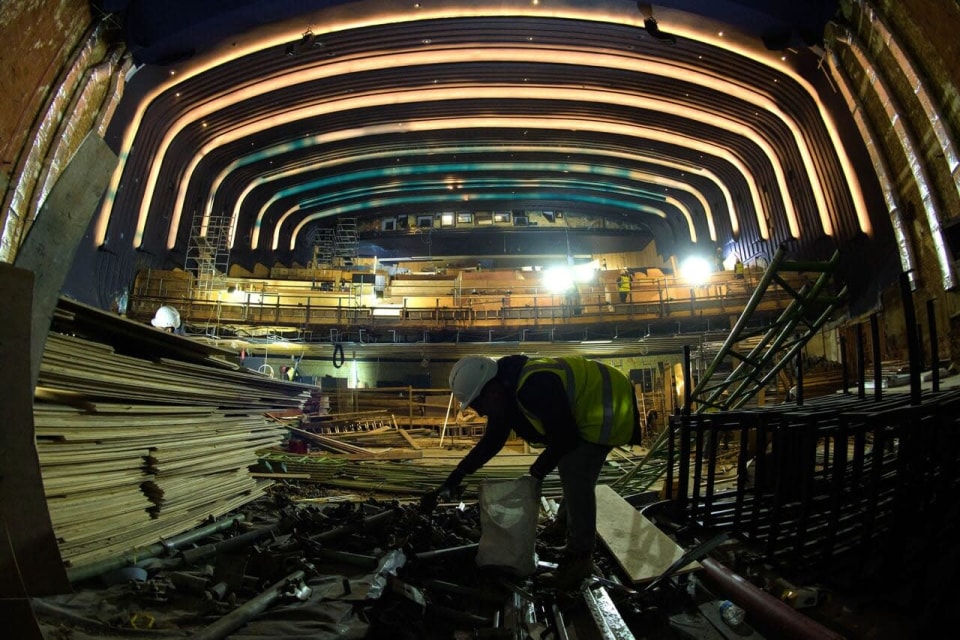 Trips to the movies are just the worst, with exorbitant prices, endless trailers, bad seats and, of course, the other people. Attendances in the UK are flat and dwindling in the US as more folks choose to stay at home. As gimmicks like 3D fizzle, the cinema industry may be waking up to the fact that it needs to up its game -- or become second fiddle to Netflix. Which is probably why a British cinema chain decided to team up with Dolby to revive a once-loved "Cathedral of the movies." Odeon's Leicester Square cinema is one of Europe's most famous theaters, and at 1,679 seats, one of its biggest. In central London, it has hosted hundreds of premieres and royal galas in its 81 years. Any film worth mentioning has probably debuted here, from James Bond and Harry Potter through to the most recent Marvel releases. The Art-Deco interior is stunning and outside's facade is beautiful, not to mention its high tower, which dominates London's art district.

Glance at TripAdvisor, however, and you'll see that prestige alone doesn't carry much sway with the public. Reviews from 2017 saw users complaining about the poor service, the temperature and the very uncomfortable seats. "Give you a sore bum within 45 minutes," wrote one visitor, "utterly dreary," said another, while a third said it was an "absolute disgrace." Rather than a destination screen, the LSC has a reputation for being an overpriced tourist trap.

Something had to give, so Odeon closed the cinema at the start of 2018 to commence a year-long renovation. And the company, now owned by AMC, went into partnership with Dolby to make the LSC the first in the UK to be equipped with Dolby Cinema. The renovation, rumored to cost anything up to $19 million, intends to create a "pinnacle of luxury cinema," according to Odeon's UK chief Carol Welch.

The Leicester Square location will be fitted out with both Dolby Vision and Dolby Atmos, the company's image and sound setups for high-end cinemas. The big benefit Atmos has over other 5.1 systems is its downward-firing speakers in the ceiling that enable objects to sound as if they're moving in three-dimensional space.

However, unlike most multiplex theaters, Leicester Square has a split level, with stalls below, and a circle / balcony above. That was a problem for Atmos, which requires precise placement of speakers both on walls and in ceilings. The solution was, essentially, to install two Atmos rigs, one to service each tier, so everyone has good sound. As well as installing speakers behind the screen itself, Dolby added a series of line array speaker stacks in the ceiling. Only two of these are visible, however, with the rest hidden by a blue cloth which creates the impression of a far shorter ceiling.

Up in the projection room, two new Dolby Vision laser projectors are sitting in crates, waiting to be installed. When working, they'll produce 108 nits of light for the screen -- a far cry from the 48 nits you find with a standard xenon-bulb projector. Other benefits of laser projection include a far wider contrast ratio and the ability to project the P3 color gamut, as well as true blacks. 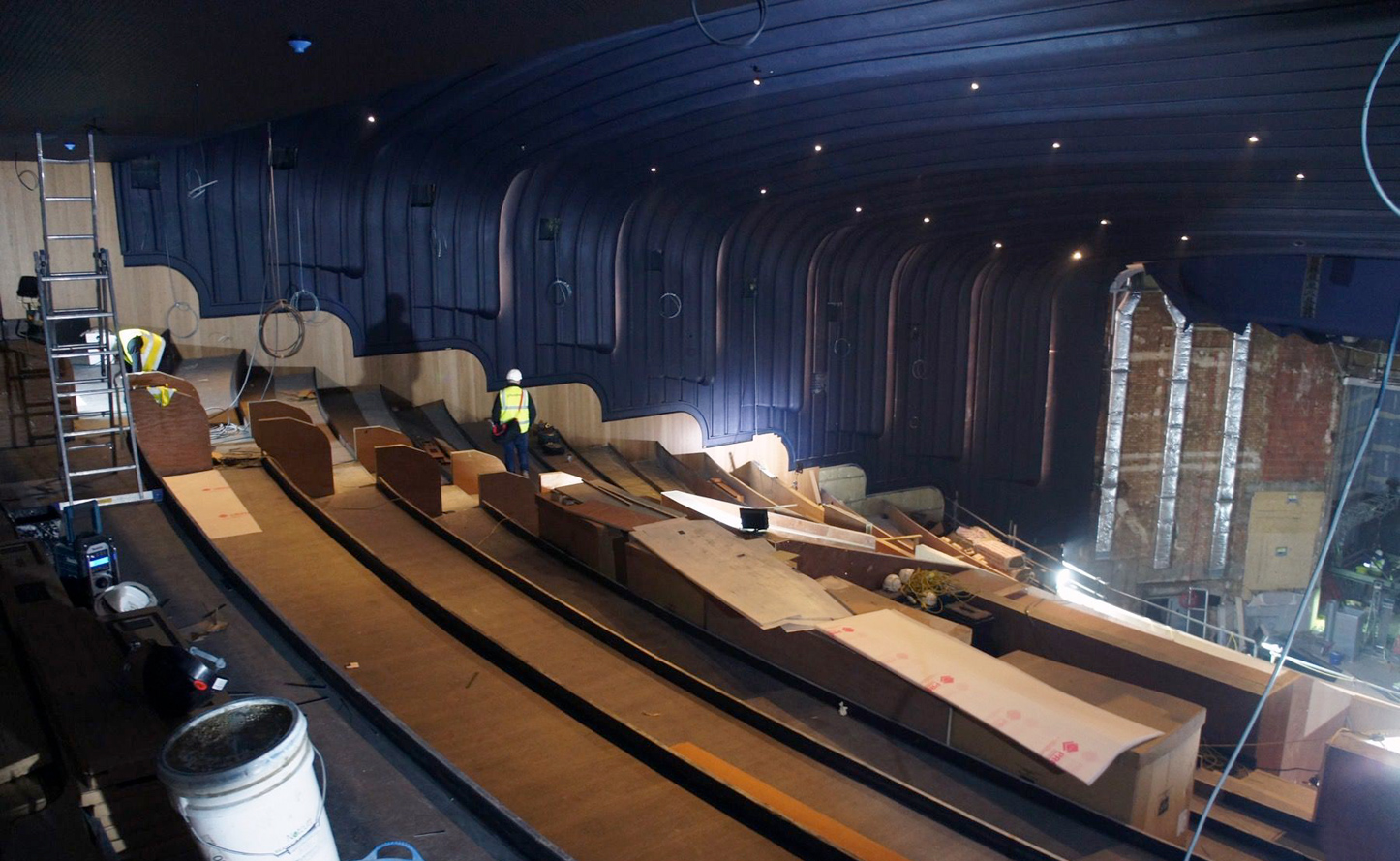 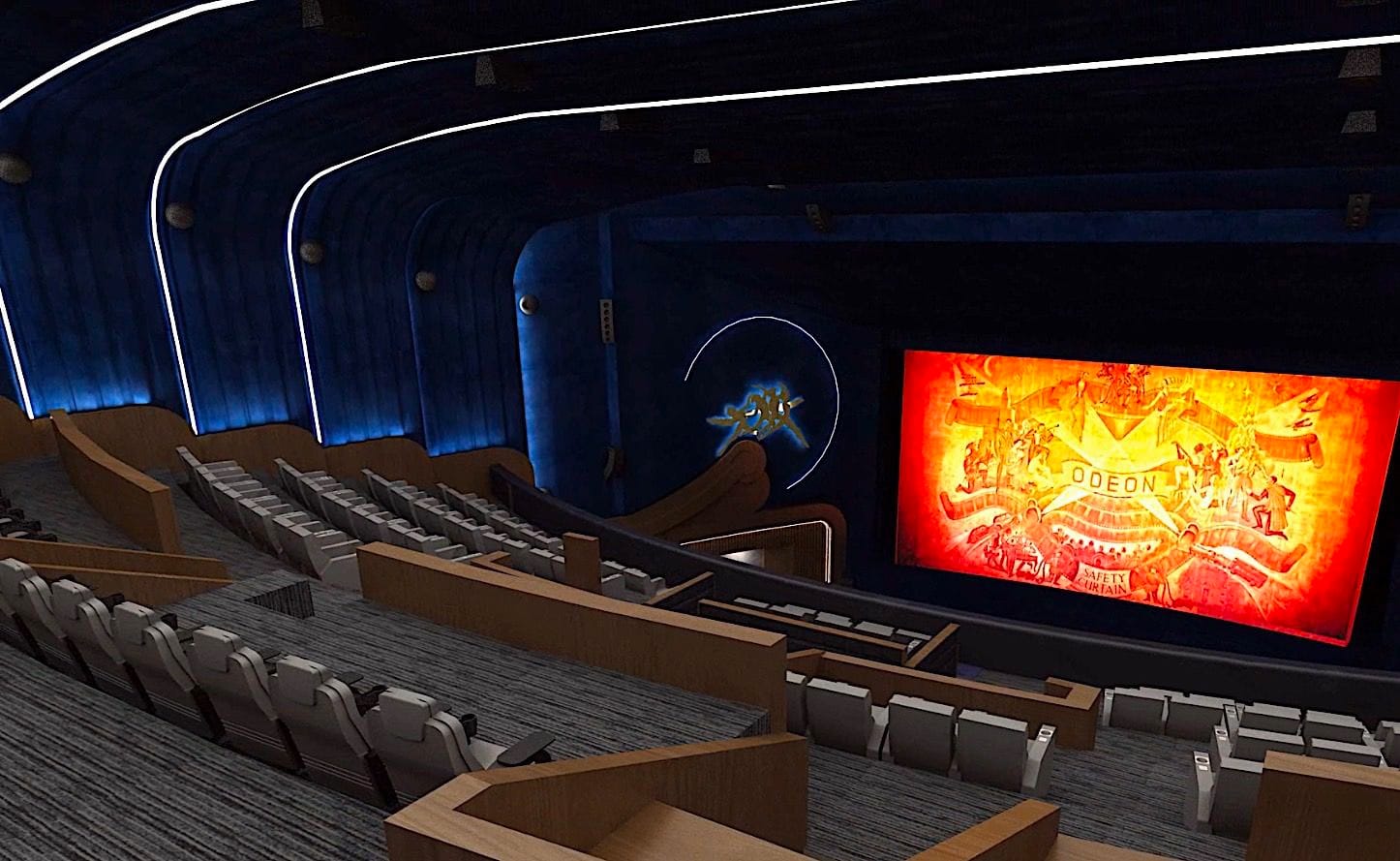 Dolby Vision will also enable films to be screened in HDR and, should it be required, 3D, at higher brightness than traditional systems. The projection room will also house one cherished relic: the cinema's existing 70mm projector, currently entombed in plastic. That's mostly thanks to directors like Christopher Nolan and Quentin Tarantino, who have insisted on showing their films in the format.

The LSC's foyer was also in a perilous state. There was hardly enough room to enter and exit, as well as a dearth of bathrooms. To remedy this, the auditorium is losing the last few rows of stalls, space which is being given over to the lobby. Between that and the bigger reclining chairs, the cinema's capacity will fall to just 800. But the seats are comfortable, there's decent legroom and every seat now has a perfect sightline.

This project will also attempt to fix some of the damage that previous building efforts did to the original design. The Art-Deco frescos on the auditorium walls have been retained, albeit with a new paint color and lighting. Similarly, the bas-relief figures of nymphs dancing toward the screen are being restored and will soon be reinstalled.

Heritage fans may lament the features that were destroyed in the '90s, including the original lobby and the fluted ceiling (pictures here). But the company has had to balance a sympathetic renovation with cost concerns, and Odeon has, at least, preserved the theater's more ornate features. Its fully-working Compton pipe organ, which rises from the floor, has been retained, as has the orchestra pit. And, despite weighing around 55,000 lbs, the screen and speaker array can be retracted, turning the cinema into a theater.

Joining the new foyer is a new Art-Deco themed bar, with seating in a glass box that's projecting out from the canopy. It's worth noting that, in line with many other theaters, most visitors now buy their tickets online, reducing the need for staffed desks. Only a few wall-mounted self-service machines will be visible in Leicester Square's foyer, a sign of how automation is reshaping our buildings. 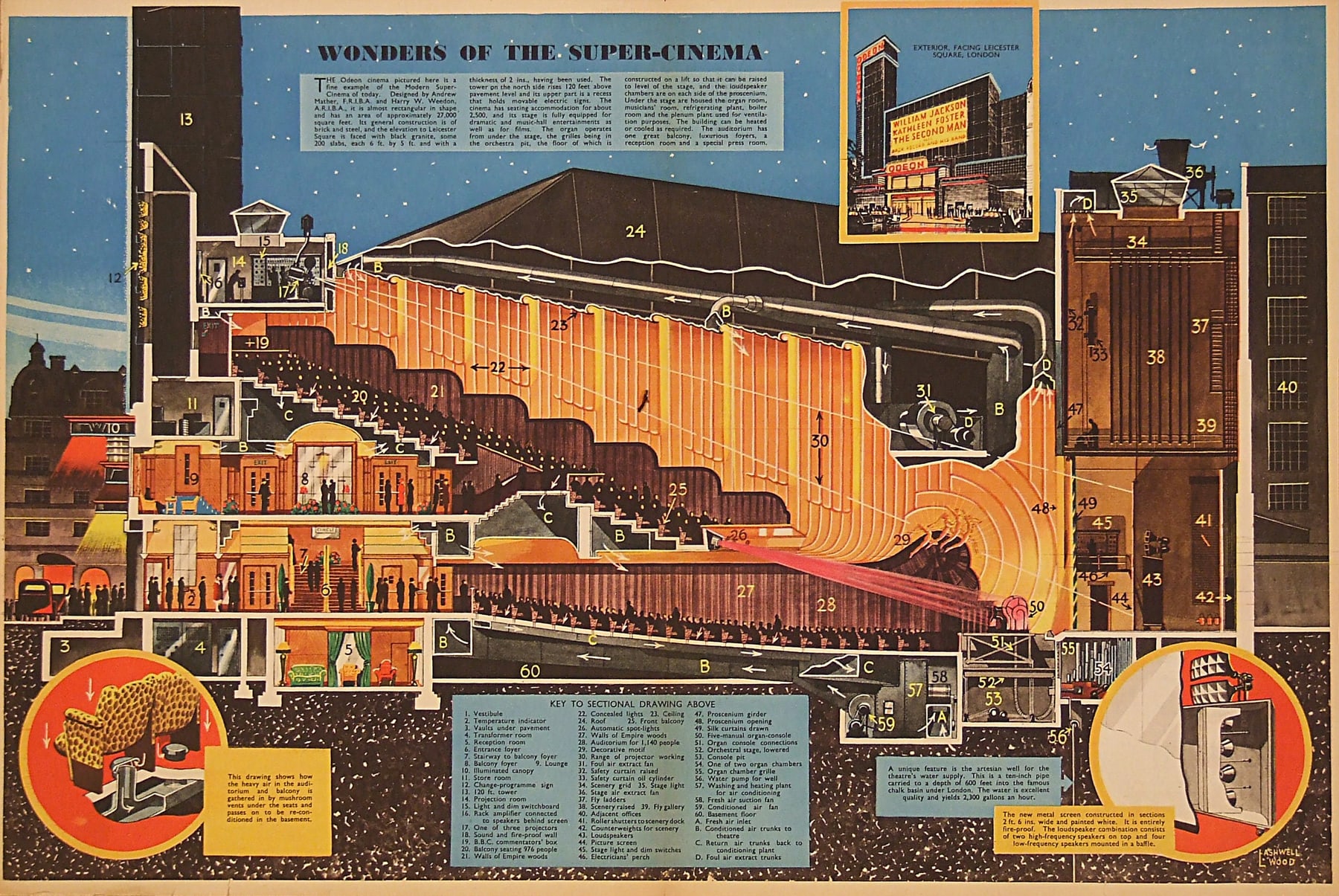 Odeon hopes that the new Leicester Square will become a home for both live events and big new cinema releases. And that all of this Dolby-infused technology will be enough to coax people out of their homes and away from their phones. Perhaps that's how cinemas can remain relevant, as an experience that you simply can't replicate with your big screen TV. That's a better reason to go than just to avoid Avengers spoilers.

In this article: av, Cinema, Dolby, DolbyAtmos, DolbyCinema, DolbyVision, entertainment, LeicesterSquare, Odeon, OdeonLeicesterSquare, UK
All products recommended by Engadget are selected by our editorial team, independent of our parent company. Some of our stories include affiliate links. If you buy something through one of these links, we may earn an affiliate commission.