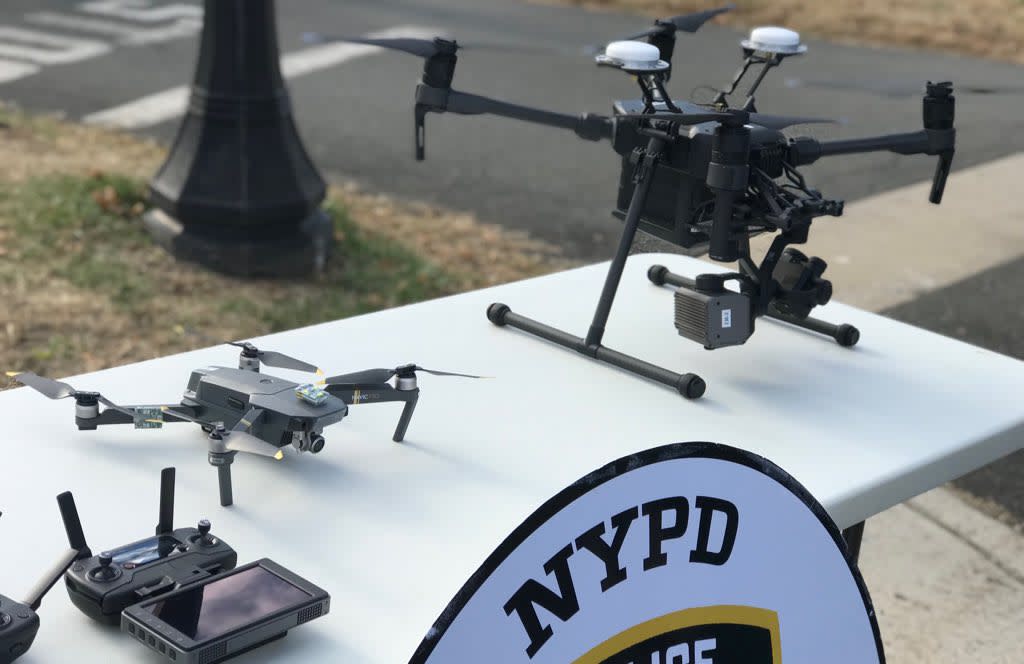 The New York Police Department announced today that it has launched a new drone program. The department says it will use its collection of drones -- 14 in all -- for search and rescue missions, crime scene documentation, hazmat incidents, large events like concerts and hostage situations.

"As the largest municipal police department in the United States, the NYPD must always be willing to leverage the benefits of new and always-improving technology," Police Commissioner James O'Neill said in a statement. "Our new [Unmanned Aircraft System] program is part of this evolution -- it enables our highly-trained cops to be even more responsive to the people we serve, and to carry out the NYPD's critical work in ways that are more effective, efficient and safe for everyone."

The NYPD currently has three types of drones. There's one DJI Inspire 1, which will be used for training and testing, two DJI M210 RTK drones and 11 DJI Mavic Pros for "tactical operations."

As for what it won't use its drones for, the NYPD says unacceptable uses include routine patrol, traffic enforcement, immobilizing vehicles or suspects, being used as or equipped with a weapon and searches without warrants. The department added that the only officers allowed to use the drones are members of the Technical Assistance Response Unit who have been trained on the devices.

The Unmanned Aircraft System will NOT be used for:
🔹Routine patrol
🔹Traffic enforcement
🔹Immobilizing vehicles/ suspects
🔹Warrantless surveillance
🔹As a weapon pic.twitter.com/13fb4J9C7L

A number of police forces across the US and abroad have begun to use drones. Last year, NYC firefighters deployed a drone for the first time during a fire response after testing it for a number of months.

City Council Member Donovan Richards told the New York Times that the NYPD sought advice from the the City Council's Committee on Public Safety and the New York Civil Liberties Union, but he was interested in legislation that would set some privacy safeguards around the department's drone use. "What we want to avoid is mission creep, where you start with the use of drones for traffic and before you know it, it's being used for surveillance," he said.

Update 12/5/18 9:50AM ET: A previous version of this article stated that the NYPD used drones during a 2011 pilot program. The NYPD has informed Engadget that drones weren't a part of that program and this article was updated accordingly.

In this article: DJI, drone, gadgetry, gadgets, gear, NewYorkCity, nypd, police, security, uav
All products recommended by Engadget are selected by our editorial team, independent of our parent company. Some of our stories include affiliate links. If you buy something through one of these links, we may earn an affiliate commission.