The extra power on display here means you can actually get work done.

The last time I used one of new always-on PCs, I was intrigued by its potential -- why wouldn't I want to use an actual Windows computer that was always online? My job would be so much easier if I didn't need to, I don't know, stress about WiFi or events or file stories while waiting to get on the subway. Needless to say, the reality didn't quite live up to the hype.

That machine — the ASUS NovaGo — is still well under a year old, but Qualcomm has taken big steps forward since then with the launch of its Snapdragon 850 chipset for laptops and today's announcement of its "extreme" new 8cx processor. The company has spent most of the morning here in Hawaii talking about how powerful it is compared to its previous attempts at shoe-horning smartphone-class processors into PCs, and after a little hands-on time with a reference laptop, I'm starting to think Qualcomm is on to something. You're still never going to use one of these machines for dedicated gaming, but the 8cx now seems more than powerful enough for actually getting your work done.

The first reference laptop I played with was pretty ornately set up: not only did it have loads of tabs open in the early Chromium and Firefox builds for ARM machines, it was also outputting video to two wall-mounted 4K displays and running apps in a virtual machine. In the early days, getting one external display running off an always-connected PC was about as good as things got, and I don't realistically think many people who would invest in a hyper-mobile laptop would spend much time at a battle station like this one.

To be clear, it was apparent that the 8cx powering all of this stuff was having some trouble keeping everything running smoothly — I had a lot of difficulty keeping tabs on the cursor because it seemed to be jumping, not gliding, from window to window. Even so, this is a pretty unorthodox use-case for most people, and I was impressed that the machine could handle this stuff at all. 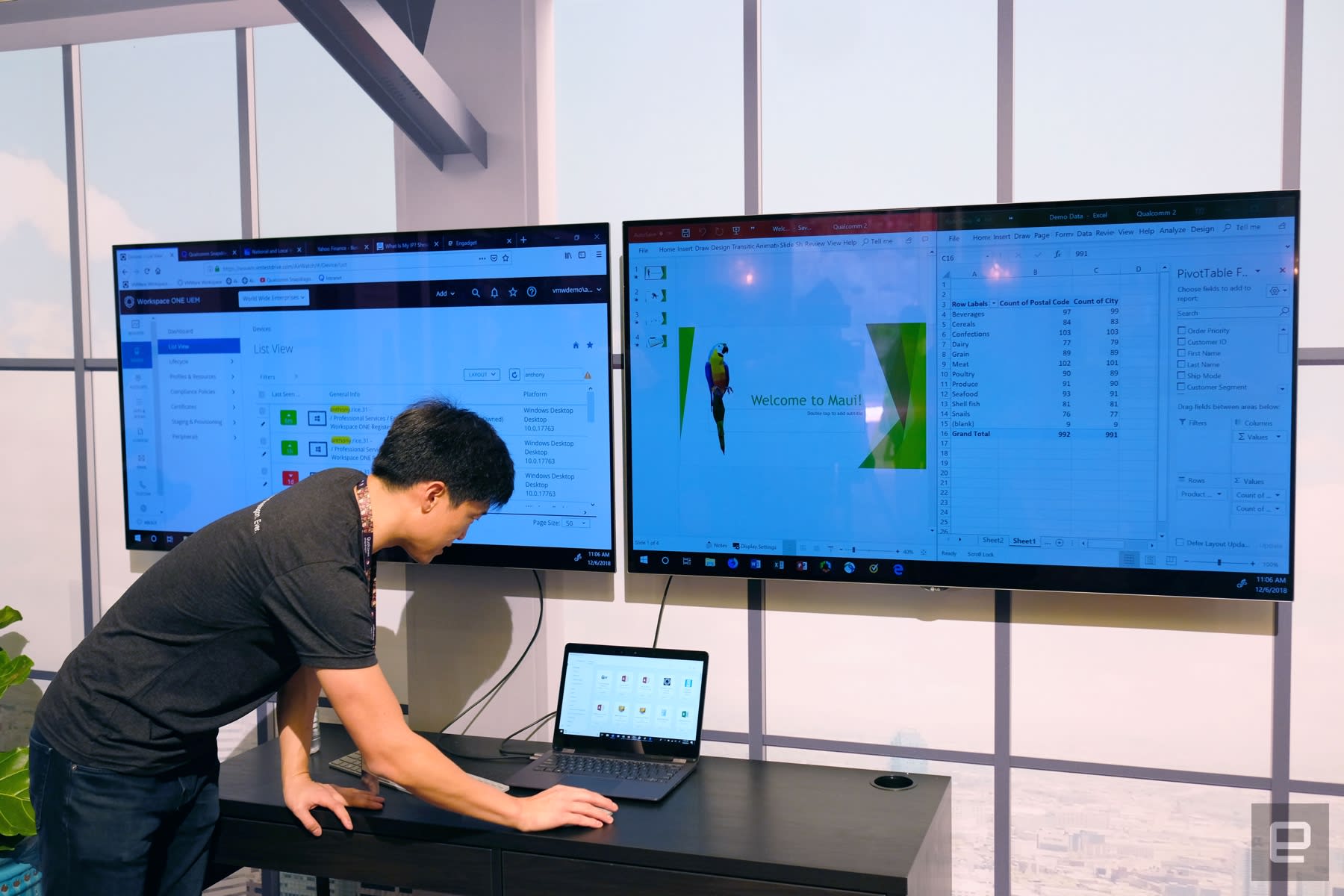 The second machine held up noticeably better, though the setup wasn't as elaborate. Even so, it had about a dozen tabs open between Chromium and Firefox, and handled a library of 116 photos in Lightroom without complaint. Bear in mind, that's not a version of Lightroom specifically compiled for ARM processors — Qualcomm told me it was the version they downloaded straight from Adobe's website. Same goes for Photoshop, which had about 20 photos open and handled some decently complex edits without trouble. Your mileage may vary, but between editing photos and running a browser with loads of open tabs, my day-to-day routine actually seems to work on these 8cx machines surprisingly well.

With all that said, my experience with the 8cx still leaves me with plenty of questions. For one, it has basically been impossible to tell what kind of battery life I could squeeze out of these machines if I used them for work -- Qualcomm has promised "amazing" battery life but who knows what that means at this point. And beyond that, we still don't actually know which hardware makers are going to start building these new always-on PCs, or when they plan to start. We can make a few educated guesses, though.

Lenovo VP Matt Bareda took the stage to talk up the always-connected PC concept and left before making any definitive announcements, but it's hard not to read into his presence here. It's also worth pointing out that these reference designs look exactly like ASUS laptops, down to the telltale fonts on their keyboards, so I'd bet they're working on new 8cx products too.

At this point, it seems pretty clear that 2019 is the year always-on, always-connected PCs will start to hit their stride. And even now, I'm seriously wondering -- once again -- whether I can ditch my work Mac and live that constantly online life. The idea is just as tempting now as it was before, but we might finally be reaching the point where people could feasibly embrace these things.