Demonstrating the immense promise and challenges of a Snapdragon-powered PC.

As the first Snapdragon-powered PC available, the ASUS NovaGo has a lot riding on it. When Qualcomm and Microsoft teamed up to make connected PCs, they promised devices that would remain always on, always online and provide access to the apps you need to work on the go. So far, parts of that puzzle are missing -- like eSIM support from carriers. But that hasn't stopped the first wave of laptops, starting with the $599 NovaGo, from trying to leave their mark. It's meant to deliver the benefits of smartphone-like connectivity and battery life in a laptop, but unfortunately also highlights the limits of an unproven platform.

Let's be real -- the NovaGo isn't the prettiest. There's nothing much to say about its staid black-on-gray color scheme, and it doesn't have sexy, skinny sides, although I appreciate its sturdy build. It doesn't help that it's heavier than most ultraportables too. Slick machines like MacBooks, Dell XPSes or HP Spectres are lighter and more attractive, but they also tend to cost at least $1,000. Perhaps the NovaGo's relatively bland looks serve as a good reminder that we're really dealing with a midrange, albeit ambitious, machine here.

The 13-inch full HD screen on this thing is adequate inside an office or a cab, but suffers under direct sunlight. It's hard to read what you're working on outdoors, as a result of both the dimness and the reflective finish of the screen. Audio is also problematic; sound is muffled when I play music with the laptop in my ... lap. You're probably not going to blast the speakers when you're using this in, say, an airport or restaurant, unless you're desperate or inconsiderate, but it's still worth noting.

I had no trouble with the NovaGo's keyboard, though. The keys are amply spaced and offer comfortable travel and satisfyingly spongy feedback. Don't expect Thinkpad-level of travel or response, though. This is a better keyboard than the MacBooks and MateBooks I tote around to shows, but it's not surprising from a thicker device like the NovaGo. The touchpad, meanwhile, is plenty roomy, although I don't like that the fingerprint sensor is embedded in the top right corner, taking up space. 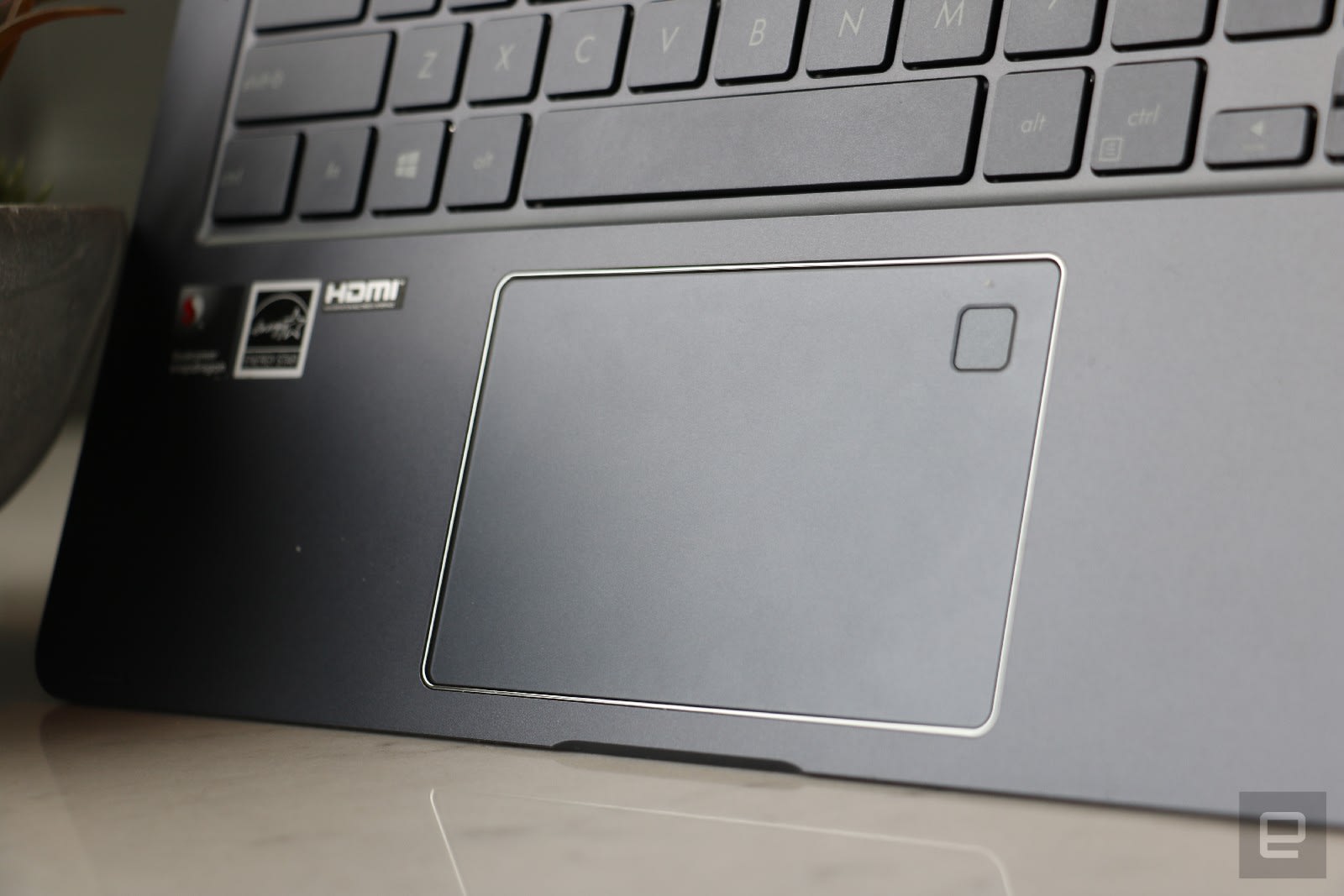 Pinch and swipe gestures on the trackpad work well -- no major complaints here aside from the occasional mistake when I'm trying to drag to highlight text. I also don't have much to report on the webcam -- the selfies are just as grainy and discolored as you'd expect, but good enough to snap a lo-fi portrait to send to your friend on Telegram or WhatsApp. At least it's centered above the screen and not stuck in some unflattering angle below your display.

Something the NovaGo has over the competition is its relatively generous array of ports. You'll find two USB-A ports, plus HDMI and microSD sockets. There's even a headphone jack! Though, I wish you didn't need to push an ejector pin into a minuscule hole to access the microSD and SIM card slot. I understand this is the same way you'd access it on a phone, but it's incredibly inconvenient. Oddly, for a device that's supposed to be smartphone-like in battery and connectivity, the NovaGo lacks a USB-C port. You'll have to lug around a separate ASUS-specific charger for this laptop.

Finally, there's the integrated eSIM and SIM card slot. Our review unit came with a T-Mobile SIM card, although in the future you should be able to pick your own carrier over the air via the embedded eSIM. Thanks to the Snapdragon 835 and its included X16 Gigabit LTE modem, the NovaGo reached impressive speeds in most parts of New York City. 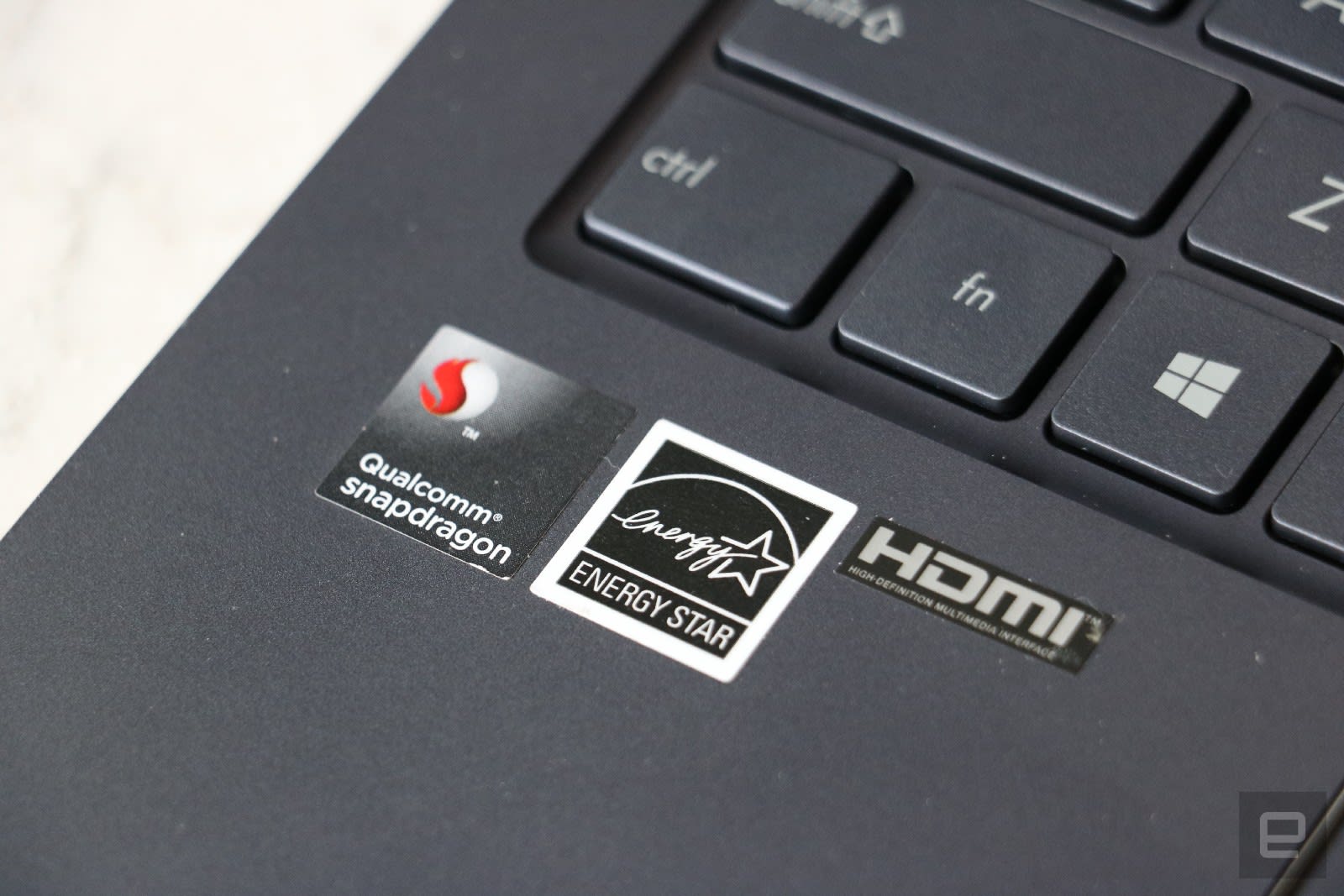 Speaking of the Snapdragon 835, how does a smartphone-grade CPU hold up when powering a Windows 10 laptop? Well, it depends.

Analyzing the NovaGo's performance is a complicated task. The typical benchmarks we use, like PCMark, don't work on the ARM-based emulator. And honestly, I'm not sure it's fair or logical to pit the Snapdragon 835 against high-end laptop chips like Intel's Core i7 or i5. But I'll say this: In general, I encountered few lags on the NovaGo. Sometimes it stuttered when loading a webpage that's animation-heavy, and it slows down when I have more than three dozen Chrome tabs open. But I've also been able to do some light editing on Photoshop CC while writing this review and having Audacity open in the background with no major delay.

Let's be very clear about what software this runs, by the way. By default, the NovaGo will run Windows 10 S, which limits the apps you can install to stuff you can find in Microsoft's store. But from now till some point in 2019, Microsoft is offering all connected PCs a free upgrade to Windows 10 Pro, which is what my review unit arrived with. This let me download and install 32-bit apps like Audacity and Photoshop CC. It's a bit of a hassle to upgrade, but you should because it'll give you access to more apps.

Even after upgrading, though, you won't be able to use 64-bit programs and even some 32-bit apps that access the kernel drive, since the emulator designed for these ARM-based systems can't process those. While I was able to install Steam, I had a hard time finding compatible games. Most of the programs I use for my work have a 32-bit version I could run, although Photoshop Elements and OpenVPN don't. With the upgrade, the Windows on Snapdragon ecosystem is more capable than Chrome OS ... slightly. Depending on your workflow, this could be a dealbreaker. 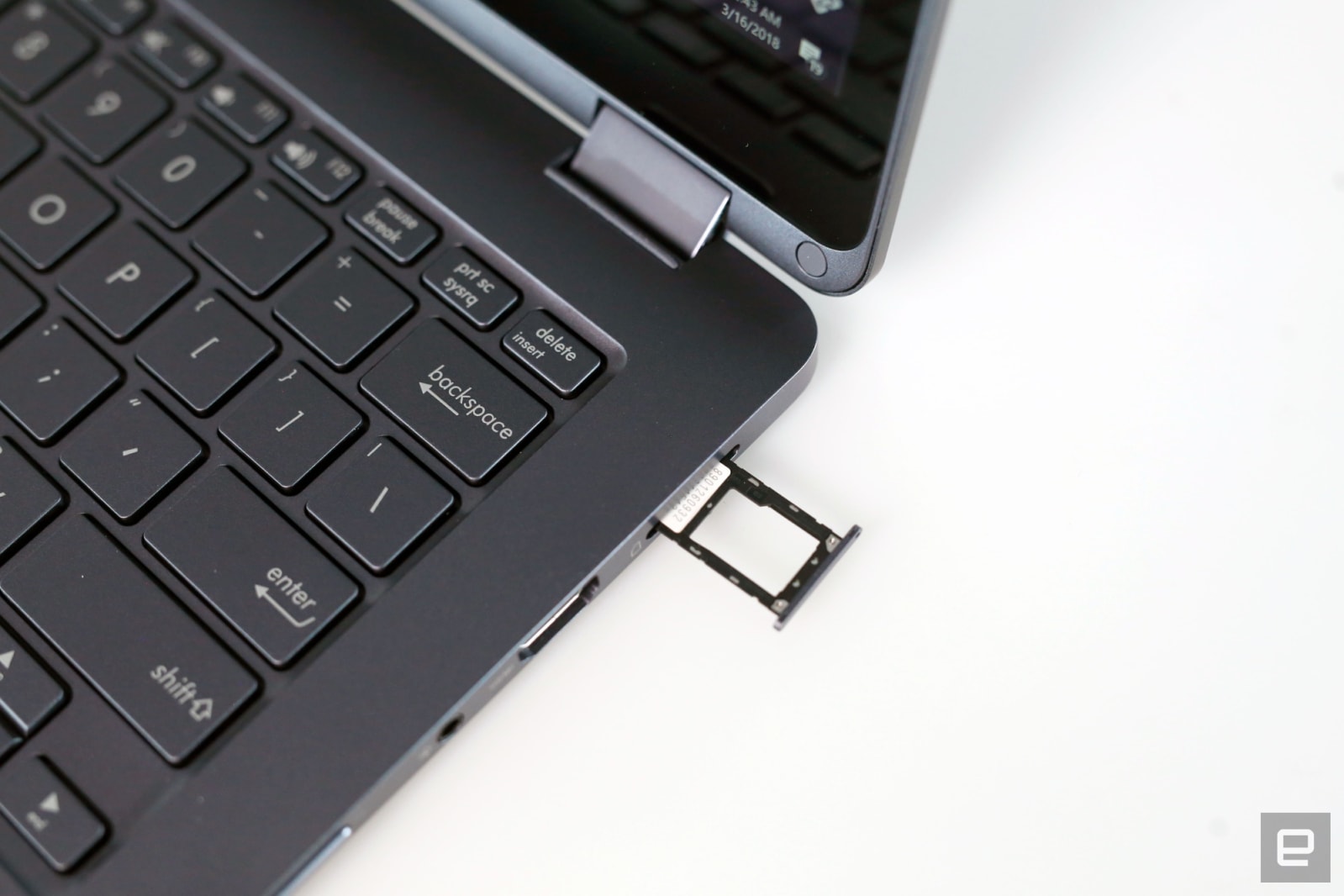 Still, the NovaGo has its benefits. The best thing about working on this laptop outside is its connectivity. It's such a joy to unfold the notebook in a cab or at a restaurant and not have to set up a hotspot or ask for the WiFi password to get connected. After a while, I just started to take my internet connection for granted, which is incredibly freeing. Just remember to add the price of a data plan when you're budgeting for this device -- LTE doesn't come free.

Another advantage of the NovaGo's similarity to a smartphone is what Qualcomm and Microsoft describe as "always-on." The notebook wakes from sleep ever so slightly faster than other ultraportable PCs, making it just a bit more smartphone-like.

By the way, you can also use the NovaGo as a tablet or prop it up in tent mode, thanks to its sturdy 360-degree hinge. I rarely used it in anything other than a traditional laptop, but for those who want to give deskside presentations, this is handy.

On our battery test, which involves looping a local full HD video, the NovaGo lasted a respectable 14 hours before conking out. That's lower than the promised 20 hours and worse than the Surface Book 2, Surface laptop and Lenovo Thinkpad X1 Carbon and Yoga. But remember, it's also hundreds of dollars cheaper.

Here at Engadget, we don't often review laptops in the NovaGo's price range, so it's difficult to find comparable systems. Plus, the NovaGo is a unique beast -- for now, anyway. The only other connected PC available at the moment is the HP Envy x2, which is smaller, lighter and costs $400 more. For your money, you do get a stylus and a detachable, backlit keyboard. But that's really all we can tell so far.

Consumers can already order one, but we haven't received our review unit and can't vouch for it. But, because the HP laptop also uses the same ARM-based Snapdragon 835 CPU as the ASUS, it's safe to say you'll face the same compatibility challenges on both.

If you're fine with a more traditional laptop, you can always consider an Intel system with embedded eSIM, such as Acer's Swift 7 or Lenovo's Thinkpad X1 range. Although we've tested the latter, none of these laptops appear to have connectivity activated yet.

Then there's the midrange laptops or even low-cost devices like HP's Stream series or Chromebooks that run limited operating systems in exchange for sub-$500 prices. But the NovaGo easily beats those in connectivity and battery life. 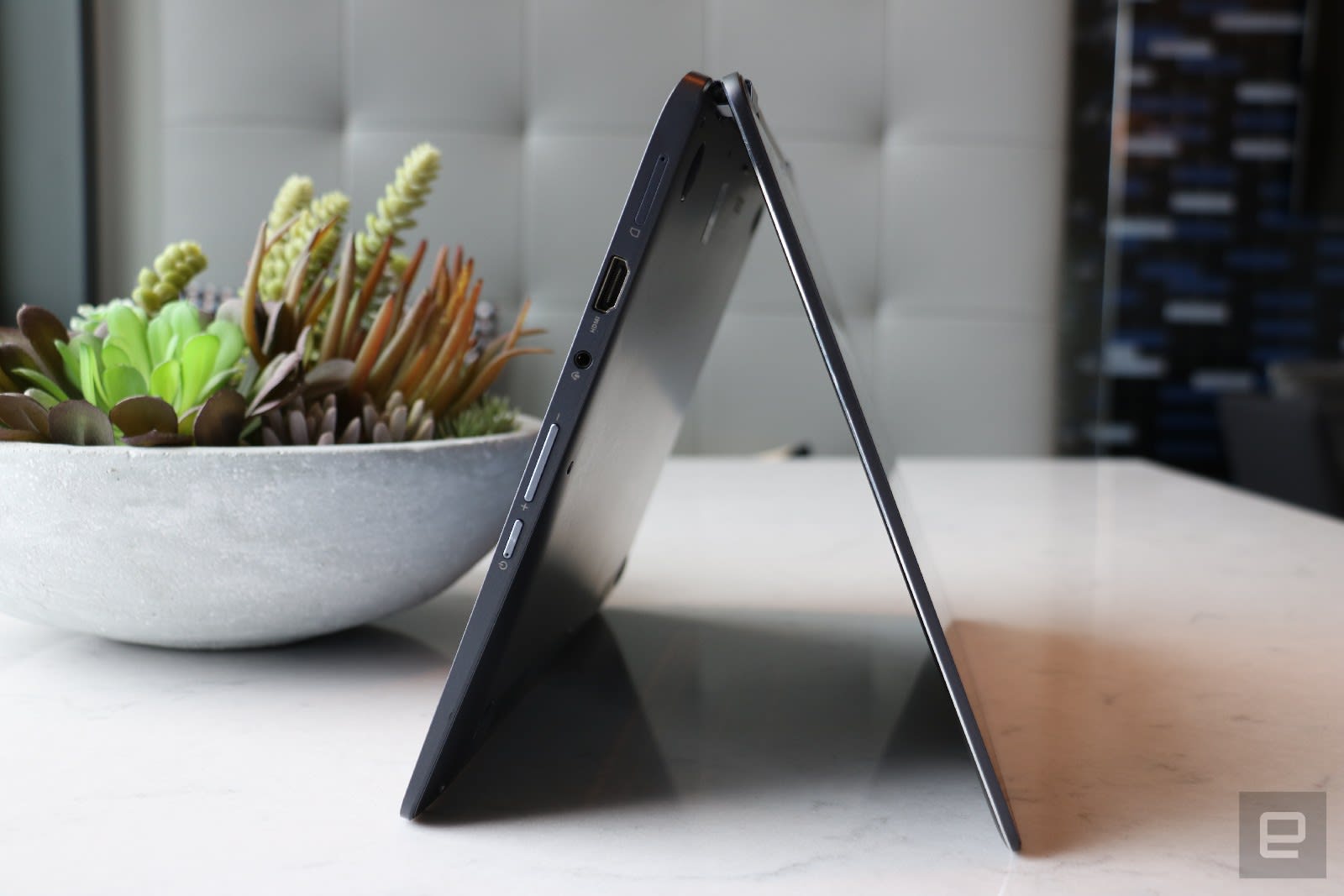 The NovaGo is a respectable debut for Windows on Snapdragon -- it lasts long, offers speedy connections almost everywhere and performs well for the price. But the hardware could definitely be better -- a brighter display and better-placed speakers would be welcome upgrades.

Ultimately, my biggest issue with the NovaGo is its app compatibility or lack thereof. While I didn't run into major issues, knowing I might not be able to install something I need was like constantly looking over my shoulder for a stalker.

You might be better off waiting a year to buy into the connected PC ecosystem, seeing as one of its standout features -- eSIM support from carriers -- is not yet live. Plus, it'll give developers time to make more compatible apps (if they choose to).

For now, I struggle to see the appeal of the NovaGo as a primary workhorse, but it's more than capable as a secondary laptop specifically for productivity on the go. It's a valiant first effort from ASUS, Qualcomm and Microsoft that will hopefully get better the second go around.