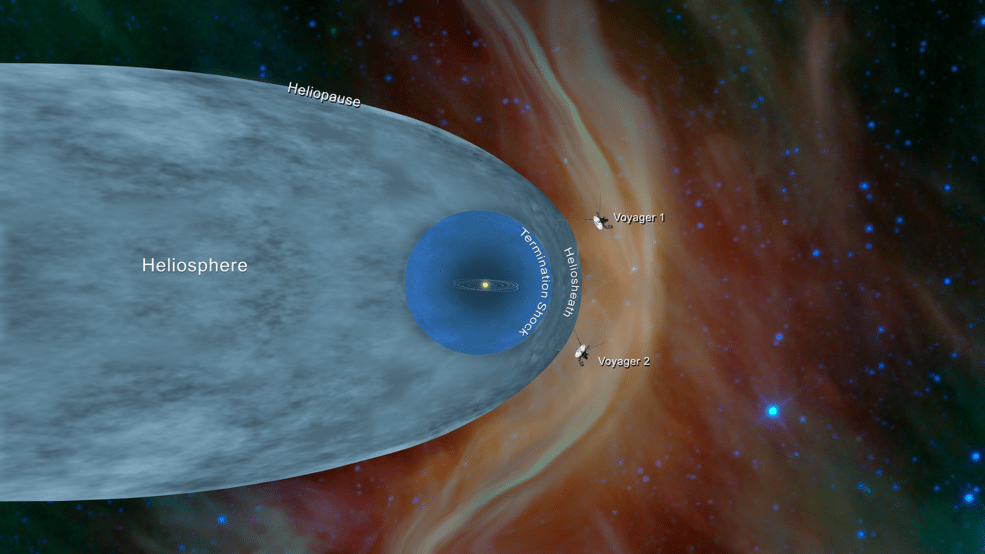 NASA's Voyager 2 spacecraft has exited the heliosphere -- the plasma bubble created by the sun that encompasses most of our solar system -- and entered interstellar space, making it the second human-made object to do so. Voyager 1 hit this milestone in 2012. NASA said Voyager 2 crossed over the heliopause, the boundary between the heliosphere and interstellar space, on November 5th and the probe is now more than 11 billion miles from Earth.

"I think we're all happy and relieved that the Voyager probes have both operated long enough to make it past this milestone," Voyager Project Manager Suzanne Dodd said in a statement. "This is what we've all been waiting for. Now we're looking forward to what we'll be able to learn from having both probes outside the heliopause."

NASA announced back in October that it suspected this moment might happen soon. The spacecraft had been detecting increasing amounts of cosmic rays, something Voyager 1 experienced in 2012. But Voyager 2 has something its partner didn't when it left the heliosphere -- a functional Plasma Science Experiment. Voyager 1's stopped working in 1980, but Voyager 2's is still in working order, and it's able to take measurements of the solar wind. On November 5th, Voyager 2 detected a sharp drop in the speed of solar wind particles and since then, it hasn't measured any solar wind flow at all -- strong evidence that it has exited the sun's protective bubble.

Three other onboard instruments -- the cosmic ray subsystem, the low energy charged particle probe and the magnetometer -- also recorded data that fit with what would be expected when exiting the heliosphere.

Voyager 2 launched in 1977 and is now NASA's longest running mission. Both it and Voyager 1 were initially built for a five-year run and were designed to give us a look at Jupiter and Saturn. But at 41 years, both are still trucking and they're now providing us with a look at what's beyond the heliopause. "Voyager has a very special place for us in our heliophysics fleet," said Nicola Fox, director of the Heliophysics Division at NASA. "Our studies start at the sun and extend out to everything the solar wind touches. To have the Voyagers sending back information about the edge of the sun's influence gives us an unprecedented glimpse of truly uncharted territory."

Both spacecraft are still technically within the solar system, however. And they will be until they exit the Oort Cloud, a large collection of distant objects that are still affected by the sun's gravity. While it's not known how wide the Oort Cloud really is, scientists estimate that it will take around 300 years for Voyager 2 to reach the inner edge and maybe 30,000 years to exit the outer edge.

In this article: gear, heliopause, heliosphere, interstellarspace, nasa, space, tomorrow, video, voyager1, Voyager2
All products recommended by Engadget are selected by our editorial team, independent of our parent company. Some of our stories include affiliate links. If you buy something through one of these links, we may earn an affiliate commission.