In case you have a need for speed.

OnePlus can't stop making different variants of its flagships, and its latest effort is the result of a team-up with car maker McLaren. The new OnePlus 6T McLaren edition is basically a tweaked version of the phone maker's latest flagship, that's designed to deliver the speed you'd expect from a race car-branded handset.

The most obvious upgrade is the McLaren 6T's 10GB of RAM, compared to the 6GB or 8GB on the regular model. This should provide plenty of power for multitasking, on top of the beefy Snapdragon 845 processor that also sits in the original flagship. By our count, there are only three other phones with this much RAM on the market, but those are pretty niche devices that are mostly available in China right now.

The McLaren 6T is also speedier in getting back to full strength, thanks to OnePlus' new standard Warp Charge 30, which is supposed to give you "a day's power" in 20 minutes. It uses a new charger and battery design and refined power management system that delivers juice to your phone quickly even when you're using it. Warp Charge 30 is also supposed to prevent the device from getting too hot while plugged in.

Other than these two tune-ups, the changes in this special edition of the OnePlus 6T are cosmetic. An orange stripe (in McLaren's signature Papaya Orange) runs along the bottom edge of the phone before fading into black near the middle, and the Warp charging cable comes in the same shade of orange as well. You'll also notice a subtle dot pattern on the phone under the glass rear, which is based on the car maker's carbon fiber design. 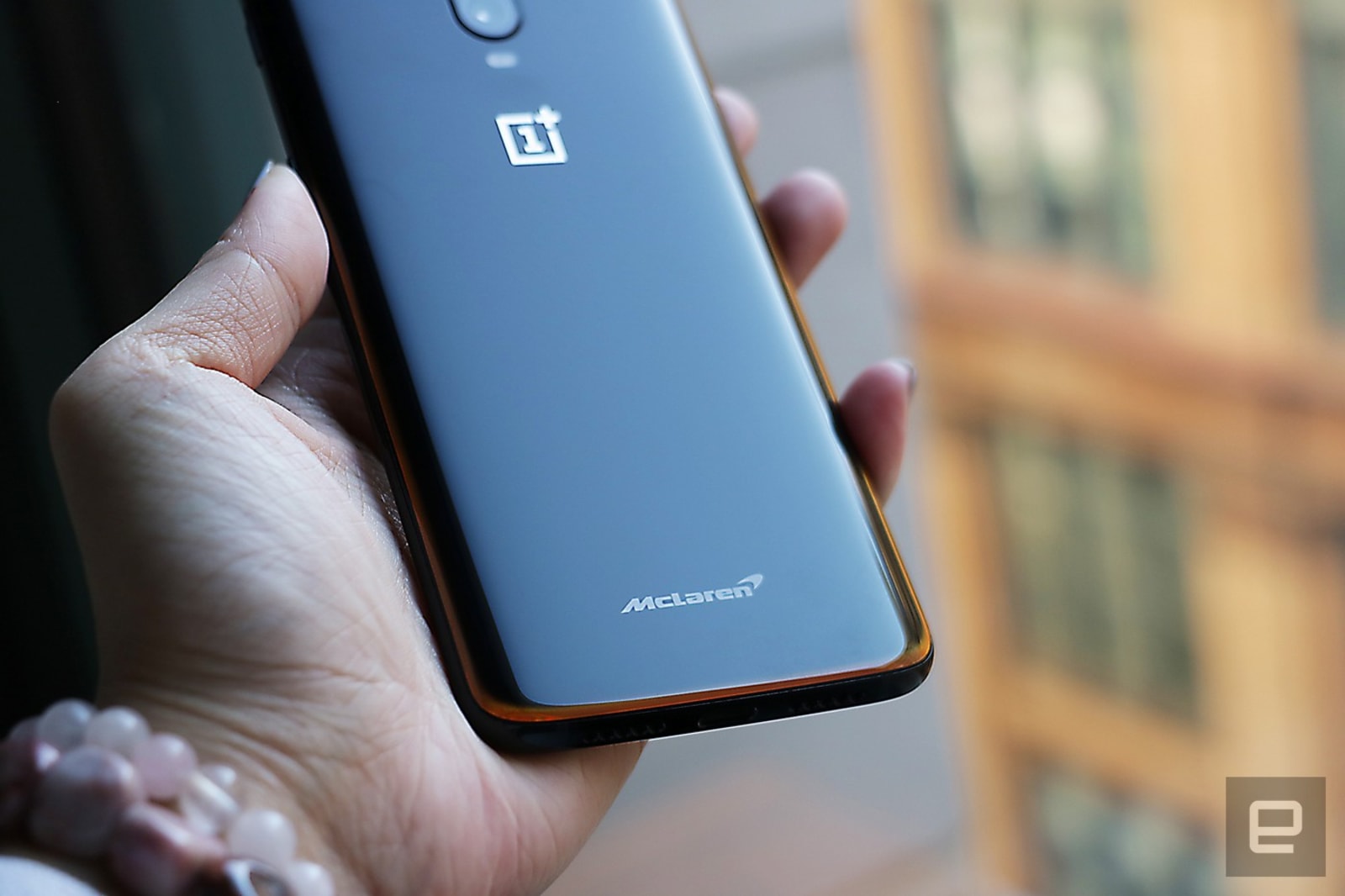 In person, the dot pattern is subtle and alluring when it catches the light. The orange stripe is unique and the first time I noticed it I thought it was a glowing effect. The whole phone feels as premium as the glossy version of the OnePlus 6T, which is nice, but is oh so prone to fingerprints and smudging.

There are some other Easter eggs with the McLaren edition of the handset that should please car racing fans. A McLaren AR app on the phone activates behind-the-scenes and special feature videos when you point the camera at the booklet that comes in the box. That box, by the way, features the McLaren Speedmark logo recreated in F1 AA-grade carbon fiber -- the same material used in the company's MCL33 2018 Formula 1 car.

We haven't put the OnePlus 6T McLaren edition through its paces yet, and can't vouch for how much better it performs against the regular flagship. What I can tell so far though is that my experience with the AR app was smooth for the most part, with small delays before some of the videos loaded.

It seems like we can expect more McLaren editions of OnePlus devices in the future, too. The phone maker's CEO Pete Lau said in a statement that this handset is the "start of an exciting partnership with McLaren, giving people a feeling of incredible speed and performance." In the meantime, the OnePlus 6T McLaren edition will be available in North America, Europe and India on December 13th starting at $699. That's about $120 more than the original 6T, which is a steal considering the specs rival the likes of far more expensive phones like the iPhone XS Max and Galaxy Note 9.