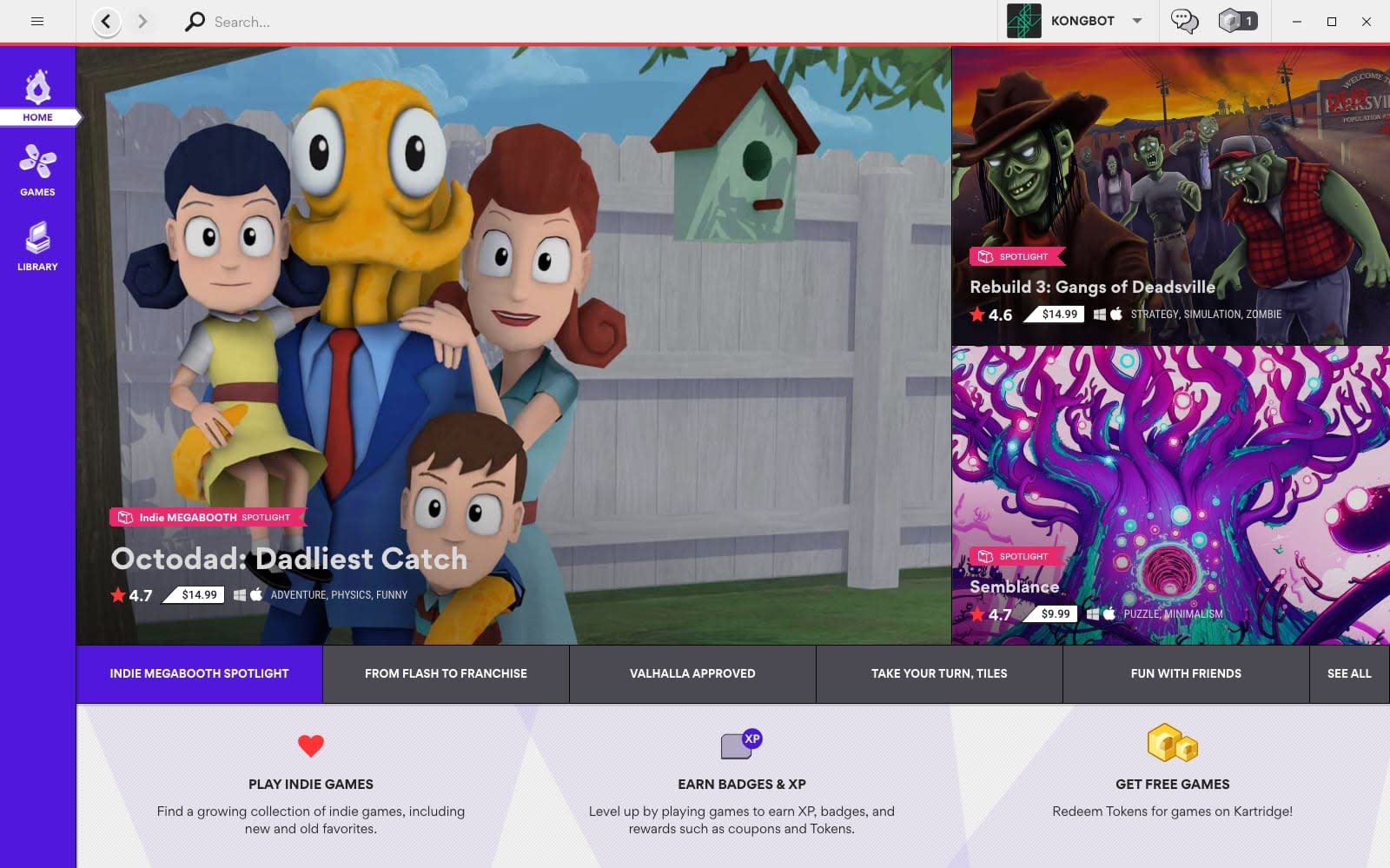 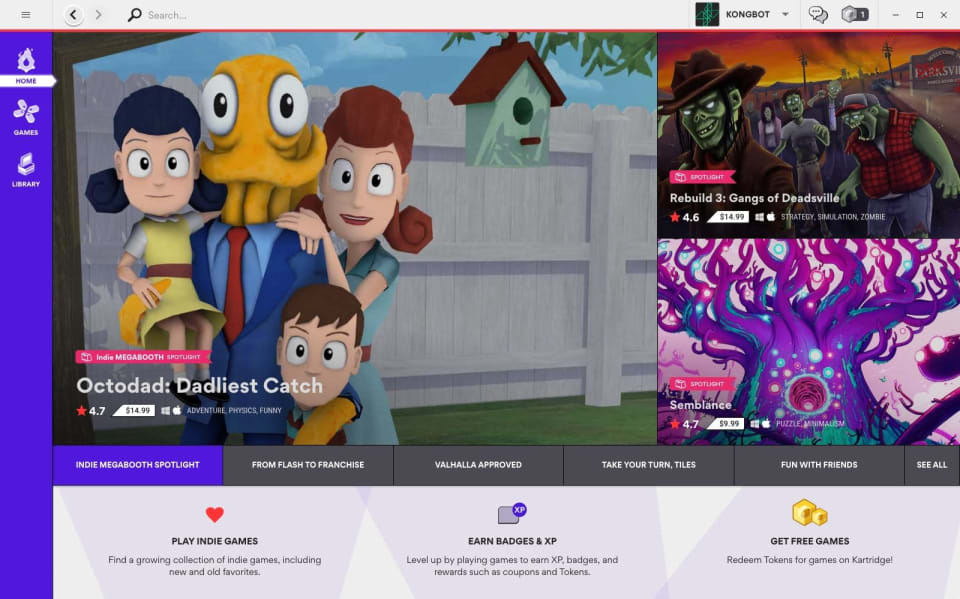 With the surprise launch of the Epic Games Store last week, followed by scores of news articles and tweets proclaiming war between Steam and Epic, it might be shocking to hear that there are other digital video game marketplaces on the internet. Kartridge, for instance, is a game store from Kongregate that offers a curated selection of independent titles -- rather than a holding cell for every project under the sun, as Steam has become for many players.

Today, Kartridge announced a partnership with the Indie Megabooth to spotlight prominent games from the group's six-year history as a traveling showcase. Titles on Kartridge from IMB alumni will be clearly marked and featured on the store's main page, and the list will be updated quarterly with fresh games. 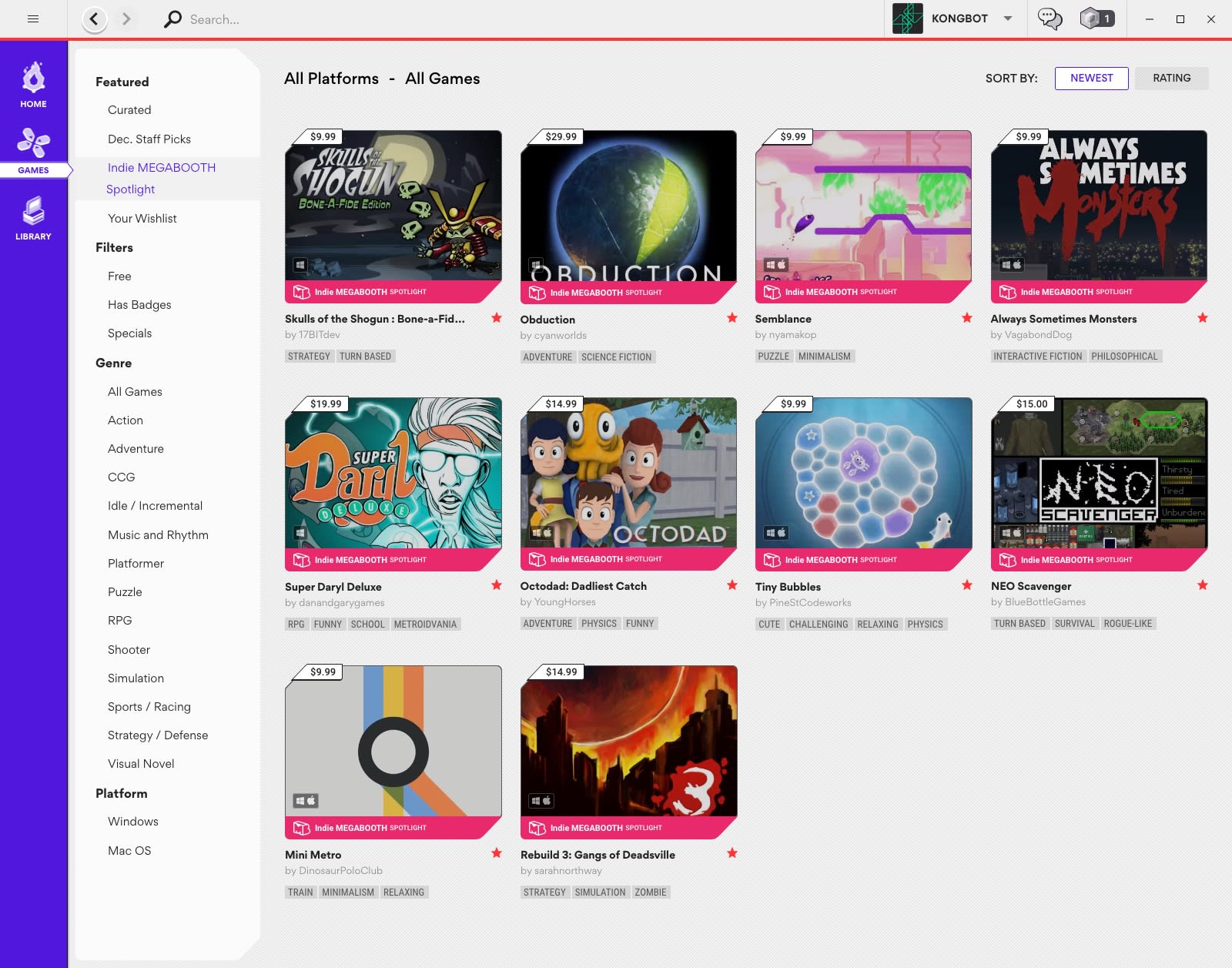 The IMB rolls deep. It's worked with more than 800 indie developers over the years, helping display their games at shows like PAX and GDC -- and now on Kartridge. The following 10 games are kicking off the partnership: Always Sometimes Monsters, Mini Metro, NEO Scavenger, Obduction, Octodad: Dadliest Catch, Rebuild 3: Gangs of Deadsville, Semblance, Super Daryl Deluxe, Skulls of the Shogun and Tiny Bubbles.

"Games are lost in the shuffle and their success is stopped in its tracks."

"PC is a really important platform for small teams since it's primarily where they first develop, before moving onto console and mobile based on the PC success," Indie Megabooth founder and CEO Kelly Wallick said. "Steam has struggled with curation or a viable solution to combat discoverability issues for indies over the last few years. With the volume of content currently on the platform, the result, unfortunately for many teams, has been that their games are lost in the shuffle and their success is stopped in its tracks after the initial release."

Kartridge is new -- it launched in open beta in November, and it's still in the testing phases. However, it offers more than 500 indie games, hand-picked by Kongregate staff and then thrown into an algorithm that's designed to show players games they're likely to enjoy. 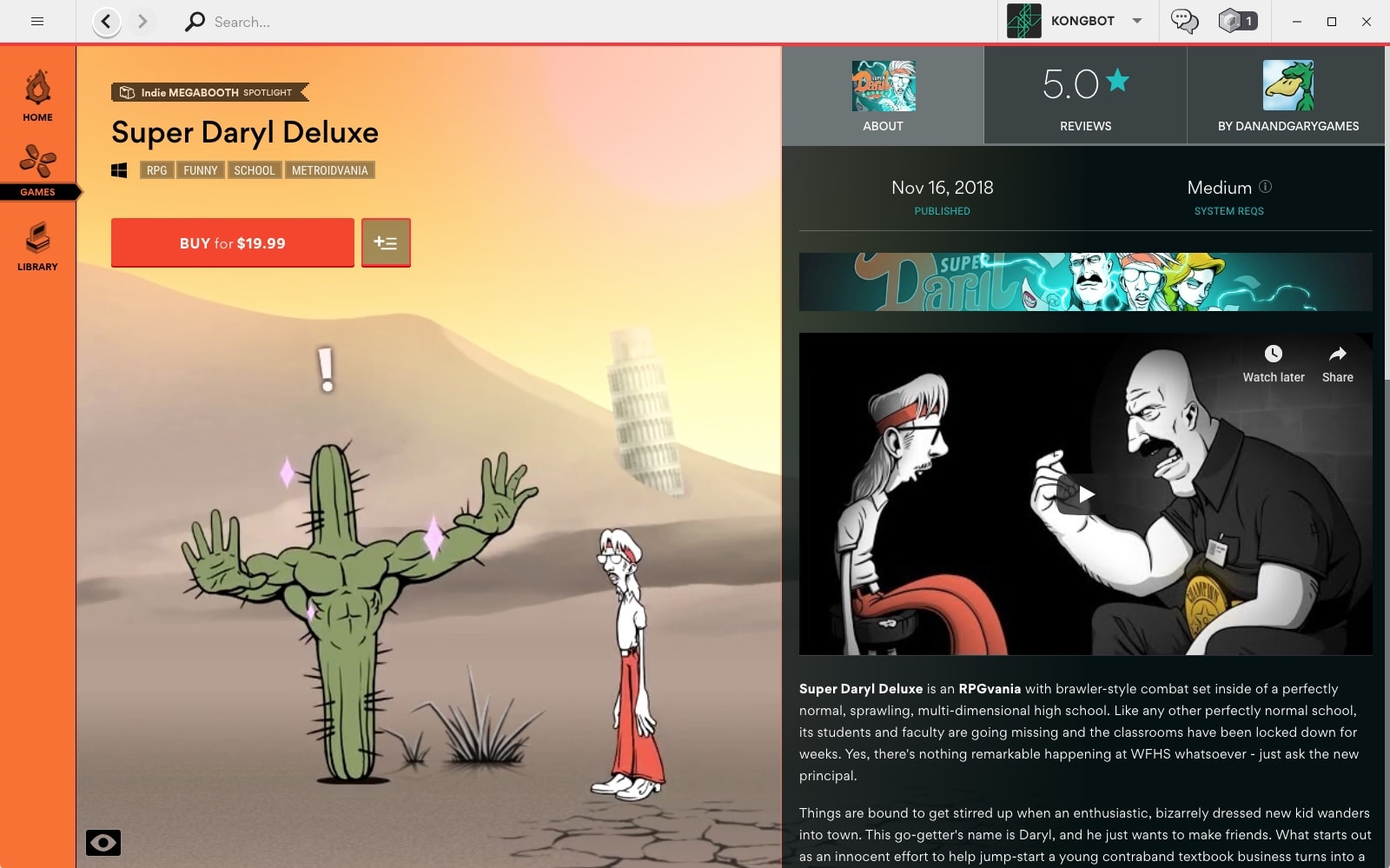 "We think video game fans are looking for options in a space that has traditionally had very few," Kartridge Director of Content Anthony Pecorella said. "We built Kartridge to be such an option for folks who were looking for something more indie, curated and community focused. Kartridge is meant to be its own destination for anybody looking for a new and unique experience in gaming."

"We built Kartridge to be such an option for folks who were looking for something more indie."

Steam is the undisputed king of digital distribution, with more than 10 years as the No. 1 marketplace for PC games. Indie developers used to be able to find immense, breakout success on Steam -- launching a game on the store essentially guaranteed a return on development costs, if not an outright financial success. However, as development tools grew more accessible and indie games flooded the market, Steam became overrun. Today, it's difficult for smaller developers to get discovered on the platform when 40 games go live a day.

Meanwhile, the Epic Games Store went live last week and it represents Steam's first real competition in a decade. Epic's store offers developers 88 percent of any revenue from their games, while Steam has historically offered 70 percent. Epic has already secured a handful of exclusives, including Hades (the new title from Supergiant Games), Super Meat Boy Forever and Journey's PC debut. These are timed exclusives, meaning they'll most likely make their way to Steam eventually, but developers are giving Epic a clear run for a year or so. 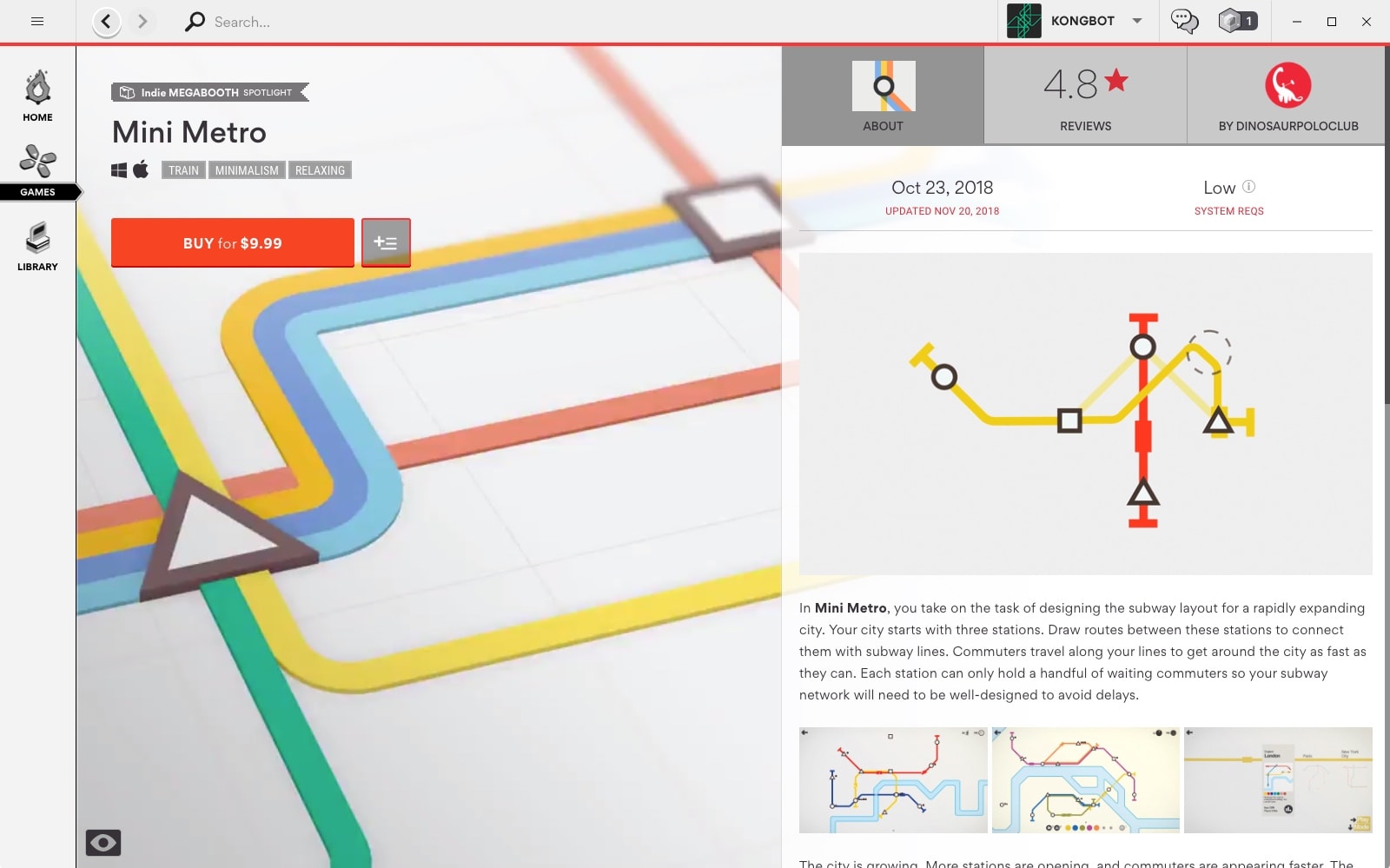 For Wallick, competition in the digital distribution world is a good thing.

"I think it means that there are more options for indie dev teams to reach a wider variety of audiences," she said. "It allows them more opportunity to explore with the effect of curation and fan community, given that the volume of content, the scope of the games industry and the diversity of audiences continues to increase by the day. While it's not always ideal to have split audiences, discoverability issues for indie titles has evolved into a huge hurdle for teams, which is a shame since most indie games fare well when they can connect with their true audience -- even when it's niche."

In this article: av, epicgamesstore, gaming, indie, IndieMegabooth, internet, kartridge, kongregate, personal computing, personalcomputing, steam, videogames
All products recommended by Engadget are selected by our editorial team, independent of our parent company. Some of our stories include affiliate links. If you buy something through one of these links, we may earn an affiliate commission.