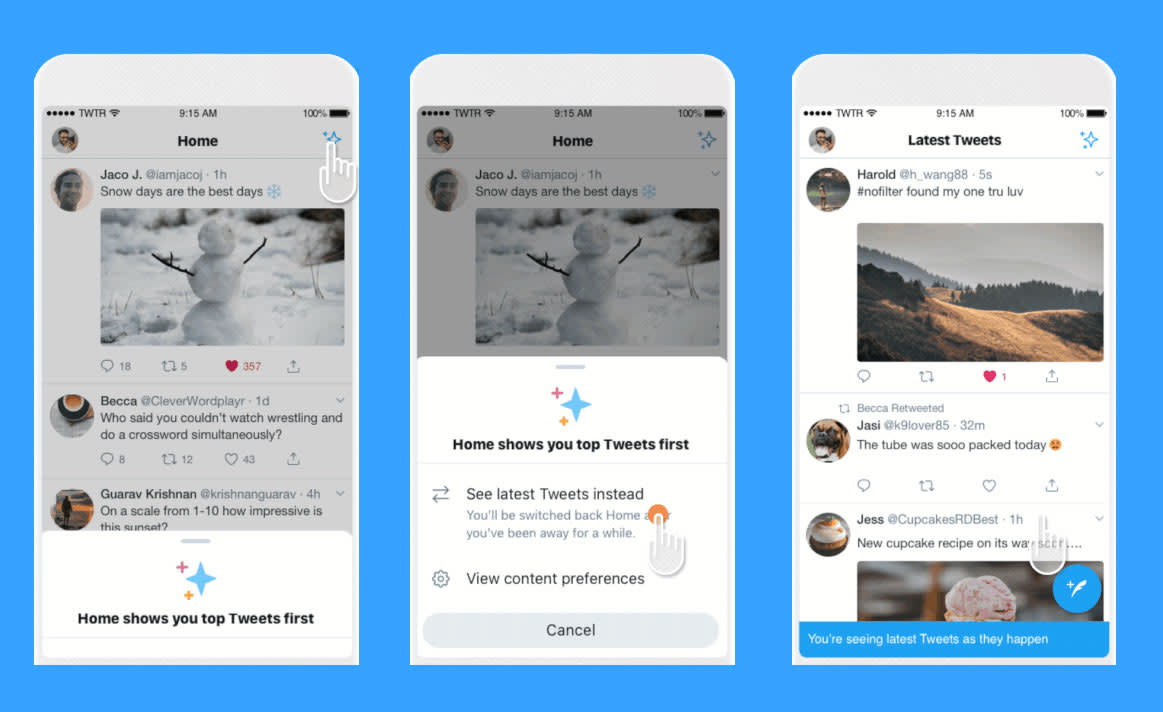 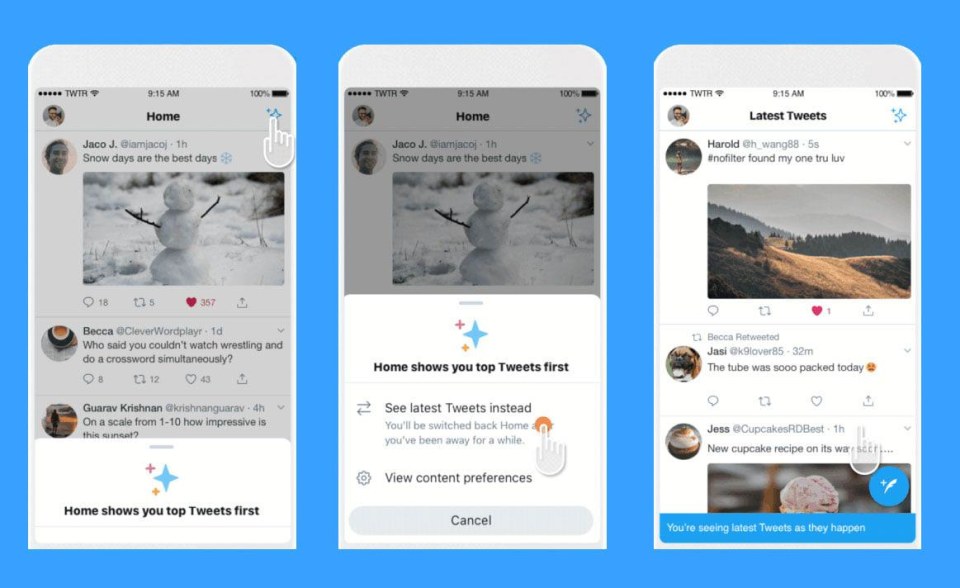 Nearly two months ago, Twitter began testing a feature that made it easier for users to see the latest tweets on their feed first, rather than the ones pushed by the company's algorithm. It's a toggle dressed as a sparkle icon that lives above the home timeline, which keeps you from having to go deep into your Twitter settings to get that purely chronological view. Certain iOS users have had access to this since October, but today Twitter is making the change permanent and rolling it out to everyone on Apple's platform. Twitter's Android app as well as its website are getting the new magic button, too, but that won't be coming until after the holidays.

Since 2016, when Twitter made its algorithmic timeline the default, many users (this reporter included) haven't appreciated opening the app and seeing tweets they may like or may have missed. And while it has been possible to disable it altogether, now you can switch between that and the pure, real-time feed with a single tap. Wally Gurzynski, product manager for Twitter Timeline, told Engadget that this is part of the company's goal to better "serve the public conversation," a mission that CEO Jack Dorsey is adamant about. "We think being able to see what people just said is a really important piece of that," he said.

The other part of this, Gurzynski said, is that Twitter has gotten bolder about questioning some of the core tenets of the service as a whole, including one of its most essential features: the timeline. Just last month, Twitter also tweaked its iOS app to emphasize names and bios in profiles, an effort to place less focus on follower count -- a metric Dorsey has said is basically meaningless. And who can forget last year, when tweets went from 140 to 280 characters. "This is another situation where we've come to question some decisions we made previously," Gurzynski said. "One thing we take very seriously is allowing people to have control over their timeline, so this feature is very much about [that]."

New on iOS! Starting today, you can tap ✨ to switch between the latest and top Tweets in your timeline. Coming soon to Android. pic.twitter.com/6B9OQG391S

For those users who actually enjoy the default Best Tweets First timeline, that's not going anywhere. Once you tap the sparkle icon, you'll have two options: "See latest Tweets instead" or "Go back Home." The latter shows you the top tweets on your feed, based on what Twitter's algorithm thinks you'll be into. Essentially, Twitter's made it to where you can have the best of both worlds, and you can switch between them as you see fit. When there's breaking news or a live sporting event, for instance, the chronological timeline may be the best option.

But how you want to make use of it, ultimately, is up to you. That's the beauty of the new toggle. Gurzynski said we can expect Twitter to keep making more changes like this, since the company wants every user to experience the app in the way that's best for them. In 2019, he said, "you'll see us continue to focus on control as being one of the focus areas for the timeline."

In this article: algorithm, algorithms, android, apple, business, chronological, chronologicaltimeline, entertainment, gear, internet, interview, ios, jackdorsey, mobile, social, socialmedia, timeline, tweet, tweets, twitter
All products recommended by Engadget are selected by our editorial team, independent of our parent company. Some of our stories include affiliate links. If you buy something through one of these links, we may earn an affiliate commission.